First on deck is the Asus Z170 Pro, which -- so far -- is the only motherboard Asus has brought to the fight. 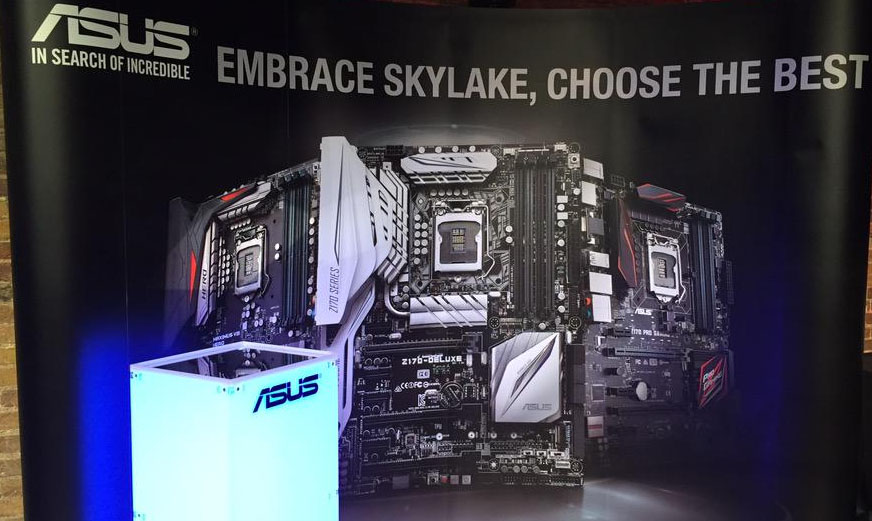 The photo above shows a 16-phase VRM for the CPU. The Z170 Pro (and the rest of the Z170 motherboards), supports DDR4 with the Z170’s 4 slots, allowing to 64GB of RAM. There are 3xPCIe x16 slots, 4xPCIe x1 slots, and a single M.2 slot visible. Despite the two lower PCIe x16 slots being x16 in form factor, they are actually only wired for x8 operation. There are also 2xUSB 3.0 slots and 1xSATAe slot. It looks as there if are 6xSATA slots, which I expect are all 6Gb/s due to the label to the right of them (and general modernization of storage on Z170). The Z170 Pro also has “Wi-Fi 802.11ac” prominently shown, so it looks like the board will also have built-in AC wireless. 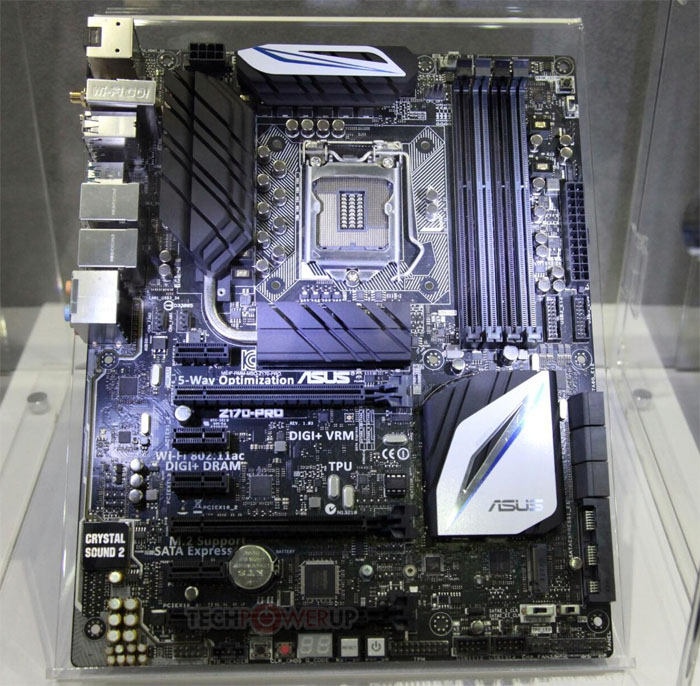 (Above: ASUS Z170 Pro as photographed by Techpowerup)

On the I/O, there isn’t too much of interest. There are standard USB 3.0 and 2.0 ports with audio out. The more interesting features are 2xUSB 3.1 ports, 2xRJ45 ethernet ports, and 2xAuxiliary antenna ports. We can also see a large step away from the gold-and-black theme that Asus used for the Z97 Pro, instead opting for a primarily white-and-black theme – with gold colored capacitors, of course.

This is a follow-up to the ASUS Z97 Pro, found here. 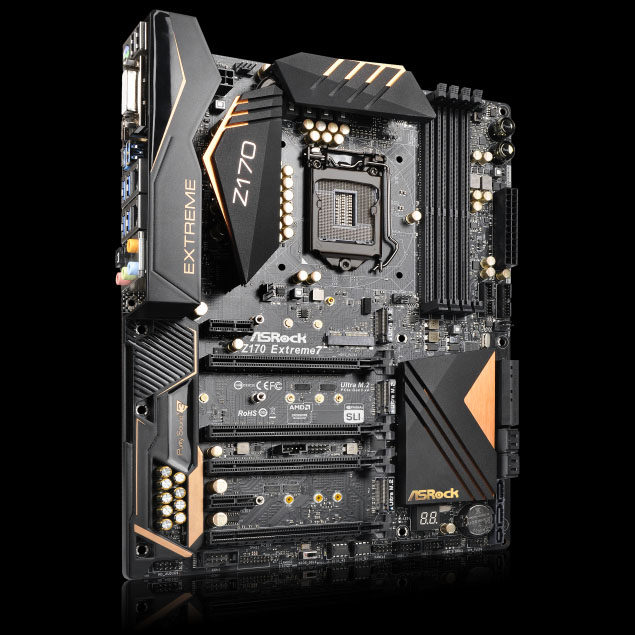 Next up is Asrock’s Z170 Extreme7 which, similar to Asus, features a more styled and darker aesthetic than their last Z97 motherboards. While looks are different, the Z170 Extreme7 also supports (what looks like) 3xSATAe along with 4xSATA III slots. On top of this, we can clearly see 2xUSB 3.0 slots, 3xM.2 slots, 1xminiPCIe, and 4xDDR4 slots. The VRM is obscured, so counting the VRM phases isn’t possible. The Extreme7 has 4xPCIe x16 slots, and 2xPCIe x1 slots. The top PCIe x16 slot is wired for x16, the second is wired for x4, the third for x8, and the bottom for x4. The I/O is decently standard from what we can see, with USB 2.0 and 3.0 ports, along with some audio and video out. The Extreme7 does have a PS/2 port, something I’m a little surprised by considering the age of PS/2 and the limited number of keyboards using it.

ASRock previously had an X79 and Z68 Extreme7 set of boards, as found here. 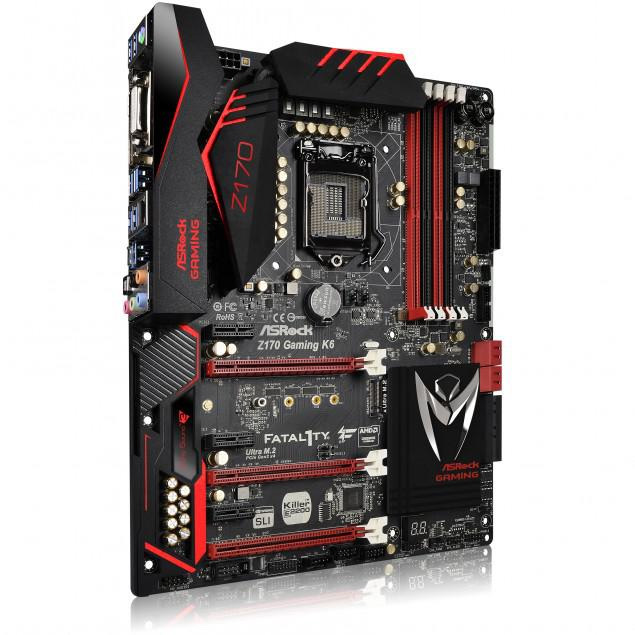 Asrock’s next motherboard is part of their gaming brand; the Z170 Gaming K6 is the second motherboard that Asrock has shown off. Starting off with the CPU VRM, we can clearly see 4 phases, but the rest of them are obscured by a heatsink. Moving on to PCIe lanes, the Gaming K6 features 3xPCIe x1 slots and 3xPCIe x16 slots. Only the first slot is wired for x16 though, with the second being x8, and the third being x4. As is the standard of ATX motherboards, it also features 4xDDR4 slots. There is also 1xUSB 3.0 slot. For SSDs, the Gaming K6 also features 1xM.2, 2xSATAe, and 4xSATA slots – although the speed of the SATA slots is unknown.

Finally, the I/O side of the Gaming K6 is fairly similar to the Extreme7 in that it features audio out, plenty of USB 3.0 ports, 1xethernet port, and 1xPS/2 port. 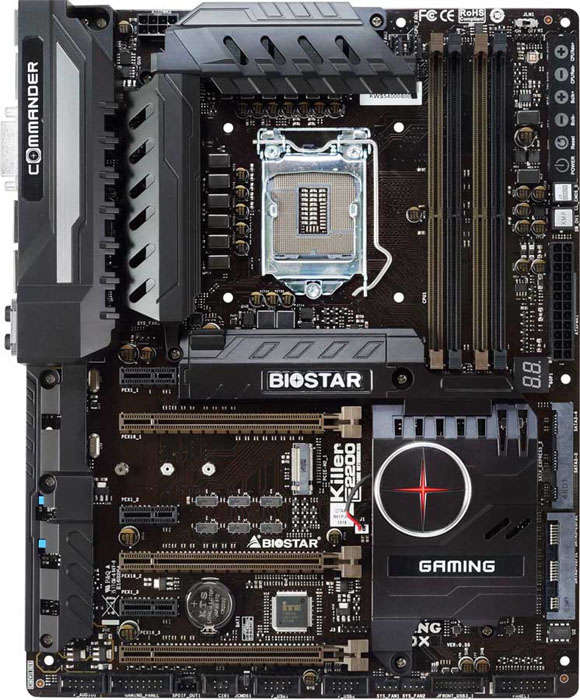 Biostar may not be the biggest name in motherboards, but despite this they are showing off their Gaming Z170X motherboard. Like the other ATX boards we’ve looked at, it features 4xDDR4 slots (up to 3200+MHz) and 3xPCIe x16 slots (which are each wired for x16, actually), 3xPCIe x1 slots, and 2xM.2 slots. To further the options for high-performance SSDs, the Biostar Gaming Z170X has 3xSATAe which, as a reminder, each SATAe can be used as two SATA 6Gb/s ports. The Gaming Z170X also has 1xUSB 3.0 slot. 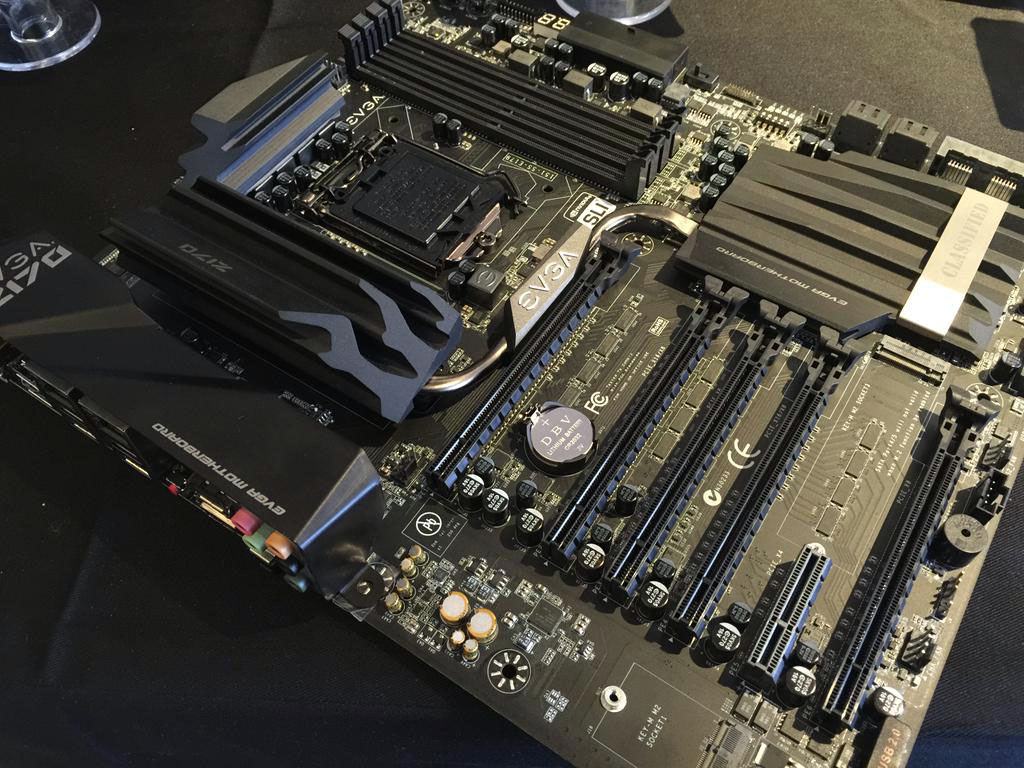 First up is the EVGA Z170 Classified, which we are covering first since it is the best photographed-board from EVGA. The EVGA Classified has a 12-phase VRM for the CPU. We can also see, both in the right corner and in between the bottom two PCIe slots, that the Classified will have 2xM.2 slots. On top of this, it looks to have 2xSATAe slots, making it prepared for high-performance SSDs, in addition to 4xSATA ports for good measure.

Being a premium board for the Z170 series of EVGA’s motherboards, the Classified has quite a few PCIe x16 slots -- 5, in fact -- along with one PCIe x4 slot to round it out a bit. The top two PCIe x16 slots are wired for x16, while the bottom two are wired for x8. From this photo I can’t spot any USB 3.0 ports, but I would be shocked if EVGA didn’t have at least one. Of course there is also the standard 4xDDR4 slots, but that’s no surprise on an E-ATX consumer motherboard like this one. The only other thing that is clear by this photo is that the 24-pin connector is a right angled connector, which makes cable routing easier and look better (in most cases).

This is a follow-up to EVGA's Classified Z97 board, found here.

The EVGA FTW appears to have 6xSATA ports, 1xM.2 slot, 1xPCIe x4 slot, and 4xPCIe x16 slots.The top PCIe slot is wired for x16, while the second is x8, and the third x4, but the fourth PCIe slot is obscured, making a count of the lanes it’s wired for not possible. The EVGA FTW also has a 10-phase VRM for the CPU, although the top 4 phases aren’t heatsinked. There are also 4xDDR4 slots but, let’s be honest, that’s pretty much expected on any Z170 ATX motherboard.

See the middle board below. 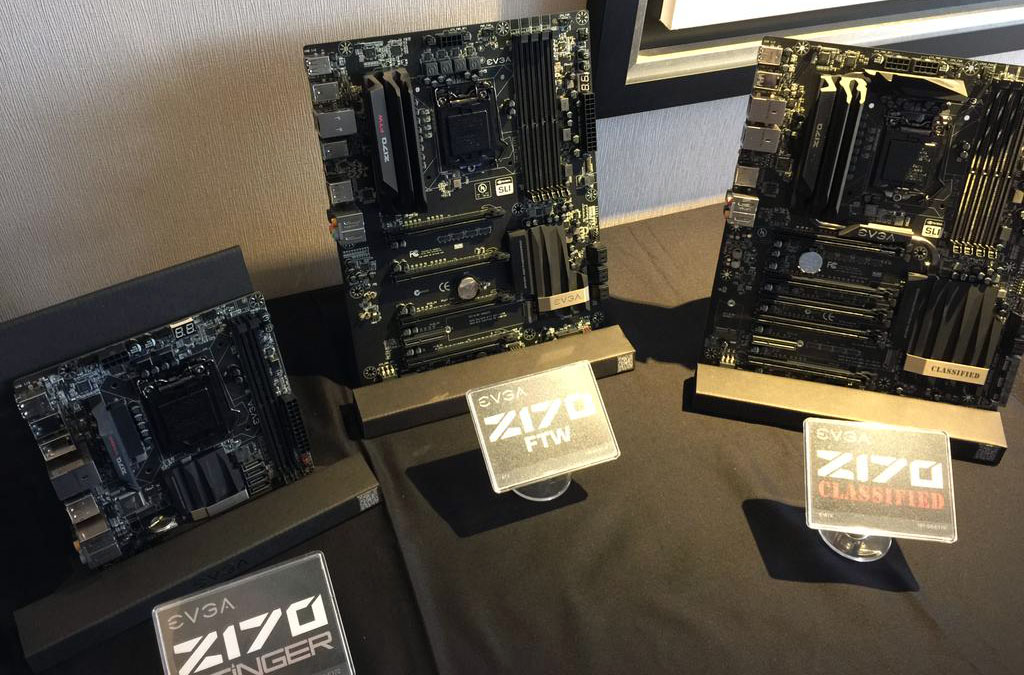 (Above: Sourced from EVGA official via Twitter during Computex)

In the photo above, the EVGA Z170 Stinger is the motherboard on the left. The Stinger is EVGA’s mITX motherboard offering. Nothing really significant can be seen other than that it has 4xSATA ports and 2xDDR4 slots. So, basically, EVGA is making an mITX Z170 motherboard, and it has SATA ports. Revolutionary knowledge. 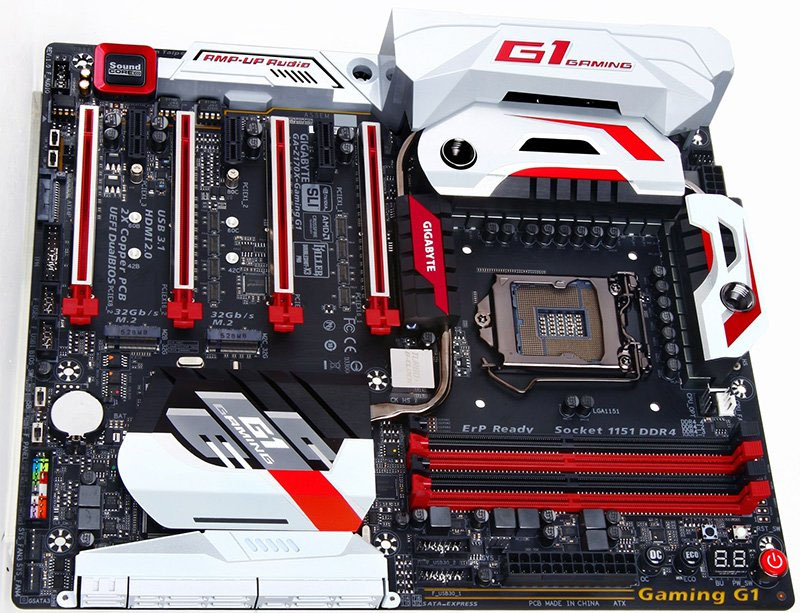 (Above: See our full article on this motherboard)

Starting off, let’s look at the CPU VRM phases for Gigabyte’s G1: Gigabyte has a whopping 22 VRM phases visible for the CPU, which is -- to use a technical term -- a lot. To add to this, on top of these VRMs, there are large heatsinks that also have support for being integrated into custom watercooling loops. Of course, being Gigabyte’s high-end board, it also has 4xPCIe x16 slots and  3xPCIe x1 slots. The top PCIe x16 slot is wired for x16, the second for x8, the third for x16, and the fourth for x8 (right to left). On the storage side of things, the Gaming G1 has 2xM.2, 4xSATAe, and 2xSATA slots. It also has 2xUSB 3.0 slots and 4xDDR4 slots. The I/O of the Gaming G1 is unfortunately not seen, so we cannot document what it includes.

This is a follow-up to Gigabyte's G1 Z97 board, which we bought for one of our official test benches.

In this photo, the Gaming 7 is the motherboard on the right. It is fairly similar to the G1 in appearance and features. It does lose some VRM phases (and watercooling support), so instead it only has a 10-phase CPU VRM. It also loses an x16 PCIe slot. So it has 3xPCIe x16 and 2xPCIe 1x slots. The top PCIe x16 slot is wired for x16, while the second is x8, and the third x4. It also loses the 2xSATA ports, instead only having 4xSATAe slots. Though it is important to remember that each SATAe slot has two SATA slots as a part of it, meaning that the 4xSATAe can be used as 8xSATA slots. The Gaming 7 also features 2xM.2 slots. As expected, it also has 4xDDR4 slots and 2xUSB 3.0 slots. Once again, the I/O is not visible.

Moving down Gigabyte’s product line to the Gaming 5 (the motherboard on the left), we see the board loses the white and red aesthetic in favor of black, red, and white. The Gaming 5 still has 10 VRM phases, 3xPCIe x16 slots, and 2xM.2 slots. The top PCIe x16 slot looks to be wired for x16, while the second is x8, and the third x4, but it is hard to tell. It actually has 4xPCIe 1x slots, one more than the Gaming 7. Like literally every other ATX motherboard seen today, the Gaming 7 has 4xDDR4 slots. It also appears to have 3xSATAe slots and 2xUSB 3.0 slots.

Finally, looking at the “budget model” for Gigabyte's Z170 Gaming series, the Gaming 3 is less flashy than its high-tier brothers. It only has a 6-phase CPU VRM, but still retains many of the other features. For example, we can see what looks like 2xM.2 slots, 3xSATAe slots,  2xUSB 3.0 slots, 4xDDR4 slots, 3xPCIe 1x slots, and 3xPCIe x16 slots. The top x16 slot appears to be wired for x16, while the second is x8, and the third is hard to tell, but looks as though it is x4. 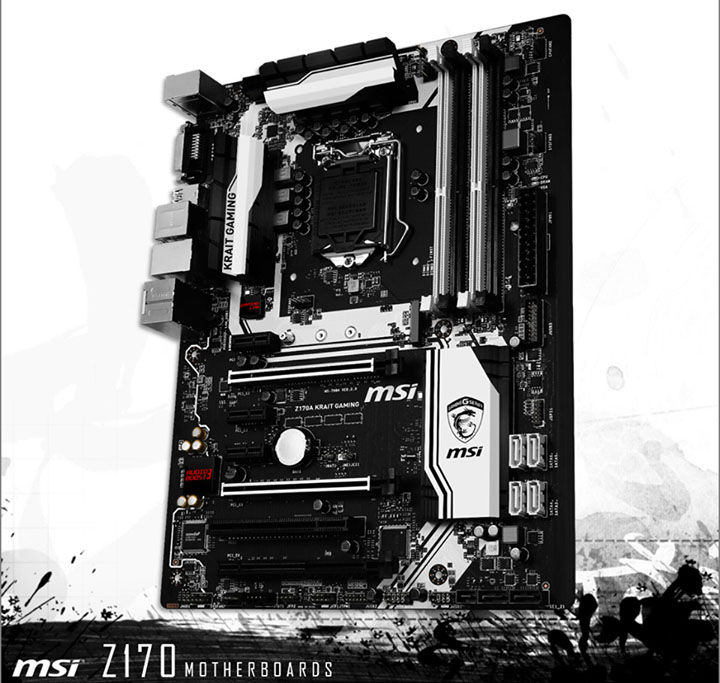 Last up is MSI, and we’re starting off with their Krait motherboard. Firstly, the Z170 Krait looks to have an 8-phase CPU VRM, along with 4xDDR4 slots. It has 1xUSB 3.0 slot. On the storage side of things, the Krait has 4xSATA, 1xSATAe, and 1xM.2 slots. The Krait also has 3xPCIe 1x slots, and 3xPCIe x16 slots. The topmost PCIe slot looks to be wired as x16, while the second and third look to be x8. MSI’s Krait also appears to have 1xPCI slot above the bottom PCIe slot… and here I thought PCI was (finally) dead. The I/O isn’t visible, but based off marking on the motherboard and the shape of one connector, it looks to have both HDMI and DVI out. 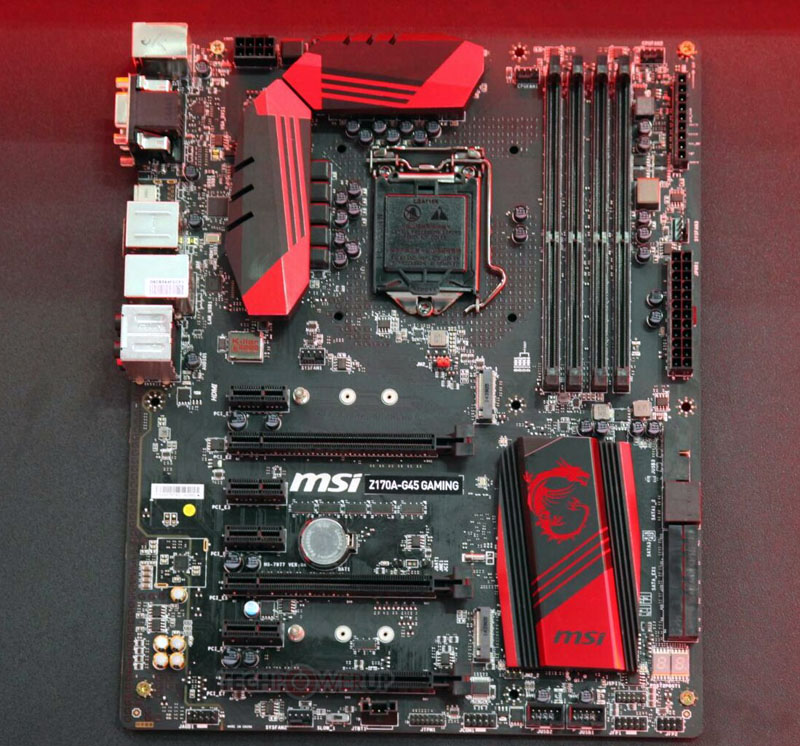 Just like before the release of the Z97 motherboards, motherboard manufacturers are proudly showing off their latest Z170 products. Currently, none of these have official prices, but we suspect we’ll know more in a few weeks. Despite this, word is that these motherboards will be released sometime around August; we’re already slated to be looking at a few of them. Stay tuned for that.