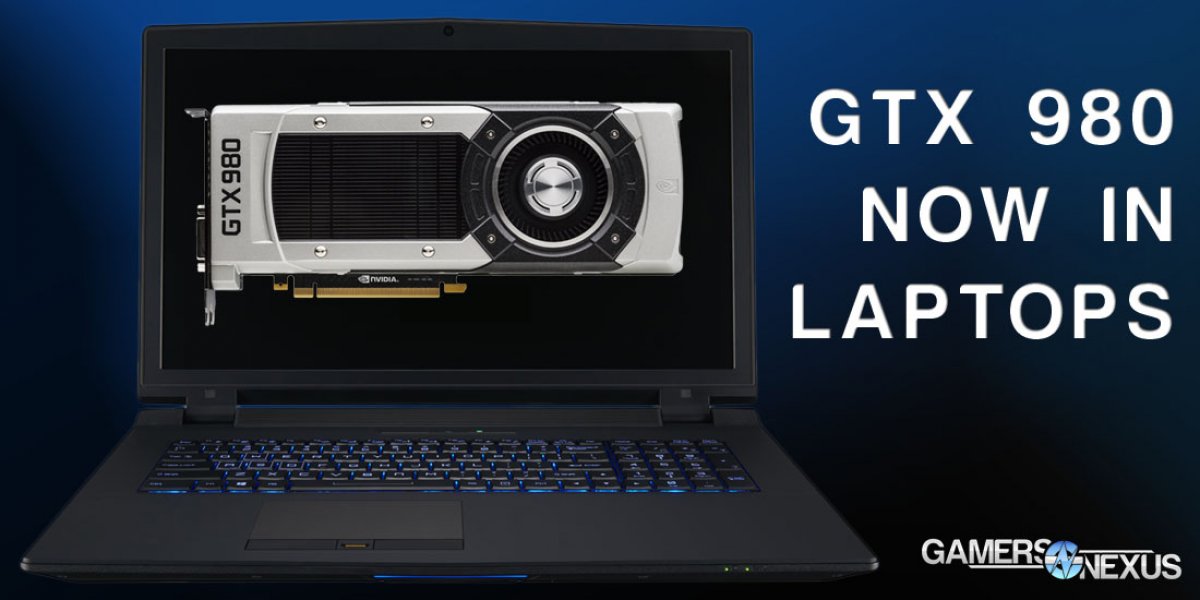 A notebook-desktop graphics disparity has generally relegated portables to custom, low-performance silicon when matched against desktop alternatives. The limitation is almost entirely tied to the thermal and energy limitations sanctioned by a small box – especially for laptops aiming for a sub-1” thickness. For all the laptops we've helped readers reflow and for which we've refreshed thermal compound, it's clear that there's good reason to reduce the thermal envelope of a mobile GPU.

CPU-GPU thermal equilibrium is often achieved in notebooks resultant of a shared cooling solution, normally a single copper heatpipe that feeds into a single fan for dissipation. Until recently – the revolution of lower-TDP components spurred on by nVidia, Intel, and now AMD – the primary bottleneck to a notebook's performance has been that thermal headroom. Manufacturer optimizations in the silicon have improved per-Watt performance to a point of seeing tremendous gains with, for instance, the GTX 980M – but even the 980M exhibited a performance deficit of 35% against a “real” GTX 980.

NVidia aims to change that. The newest product in the company's lineup is actually a year old – it's the GTX 980, but in notebooks. Until this point, there's been the GTX 980M, but the GTX 980 “proper,” we'll call it, hasn't been unleashed in notebooks in a fully unlocked form. We recently met with nVidia to get an in-person hands-on with the new GTX 980 notebooks and have first impressions, a full review is due once we've got laptops in-hand in the next week or so. 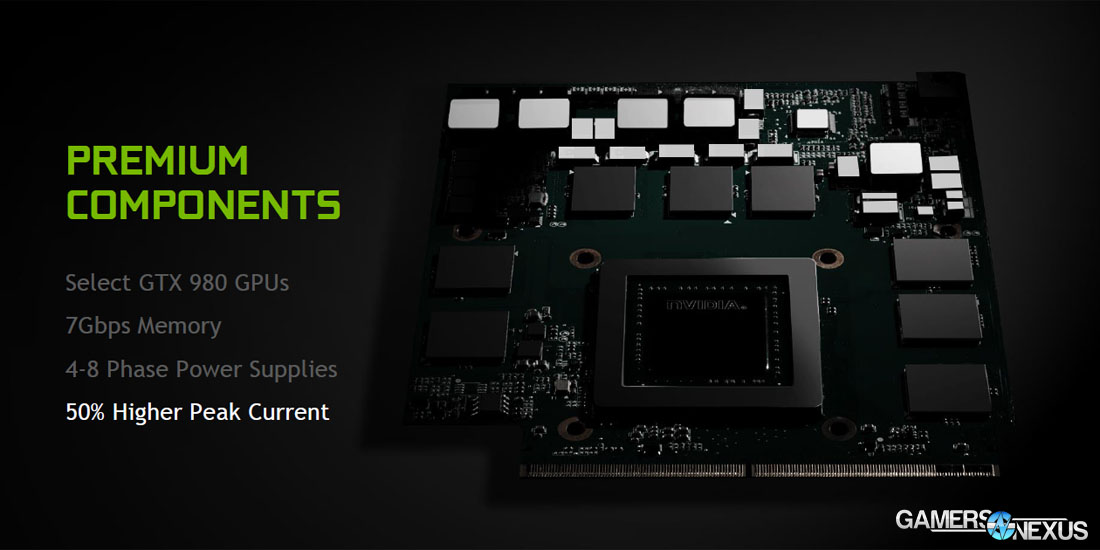 Speaking with nVidia in our meeting, we clarified several times that, yes, this is the GTX 980. The chip is the same GM204 that we disclosed in our GTX 980 review last year, with all cores enabled and the same stock clockrate. We're told to expect approximately 35% greater performance from the GTX 980 over the GTX 980M (which calculates to about a 2x gain over the GTX 880M), with initial, internal benchmarks provided below.

We're told that the GTX 980s shipping in new notebooks will be binned, with chip selection based upon the high standards for performance and thermals of the notebook units. NVidia reiterated that the portable units will use, quote, “premium components,” to include a minimum requirement of 4-phase VRM design and a strong recommendation of using unlocked mobile CPUs. Some notebooks will host 8-phase VRMs, which will aid in thermal reduction by dissipating voltage regulation across twice as many phases. This also helps support overclocking endeavors – another big focus of the GTX 980 notebook GPU. 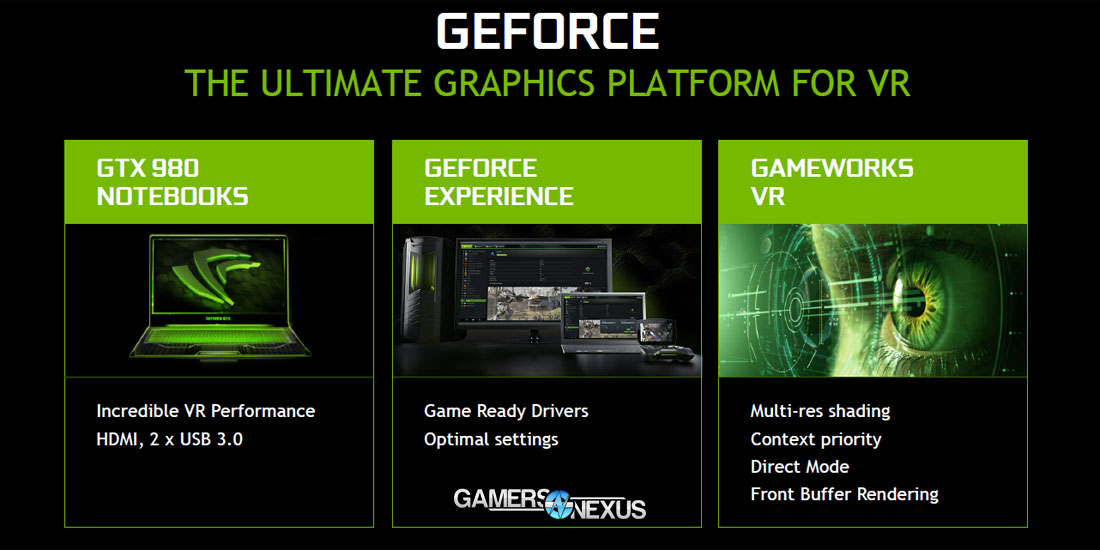 A quick note: As indicated in the accompanying slide, nVidia has also been pushing the possibility of more powerful, mobile VR support with the GTX 980 on laptops. Vendors may find this of particular interest, providing a more portable convention deployment for VR demonstration. 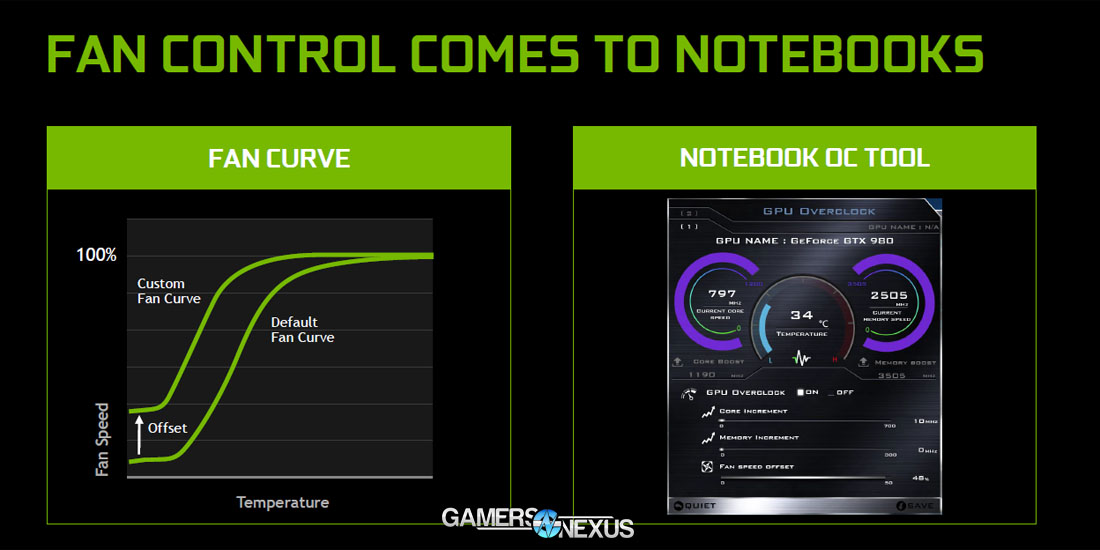 Notebooks are generally sold as a black box, which is understandable. Fan speeds are set and user modification is effectively disabled, ensuring that the laptop modulates its fan speed as its thermal needs demand. The GTX 980 removes this restriction by introducing fan speed control through an overclocking tool (provided by nVidia for reskin to manufacturers), which allows custom fan curve configuration and OC management through sliders.

The fan curve configuration is the same as what we've seen in Afterburner, Precision, and most other OC applications: Users can correlate fan speed percentages to temperature targets and ensure a speed increase that is compliant with their unique noise and thermal demands. Within reason, anyway. 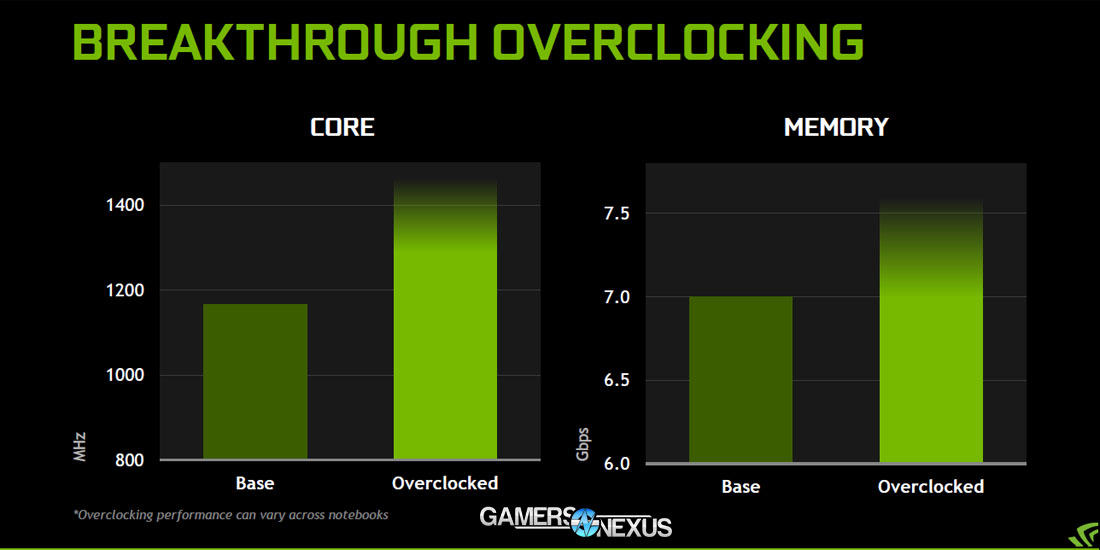 Overclocking the GTX 980 notebook GPU is done with some restrictions, but not many. Core clock can be manipulated using a frequency offset slider, memory is open for overclocking, and fan speed can be offset. As of launch, overvolting is not possible on the GTX 980 in notebooks, but we were told “it could be a possibility in the future.” NVidia is recommending that laptop manufacturers couple their unlocked GTX 980 with unlocked CPUs for enthusiast-level notebooks that allow overclocking of the two major components, though manufacturers may stray from that recommendation if desired.

In our hands-on session, we were given an MSI GT72 GTX 980 notebook to play with – the large one upon which the Fangbook is based – and achieved an offset OC of +180MHz with zero effort. We'll test full OC potential once a unit is in our hands for testing. Under benchmark load (using Unigen's Heaven), the overclocked GT72 GTX 980 notebook was sitting in the 80-85C range; we're unsure of what ambient was in the hotel room (likely ~20C), but that's still a fully reasonable temperature for an overclocked laptop GPU. Smaller notebooks, like the sub-1” Aorus X7 DT, were still hitting around the ~82C range (not overclocked) with the GPU under full load – not bad for a desktop part crammed into a very thin notebook.

NVidia didn't give us many numbers, but they did give us these: 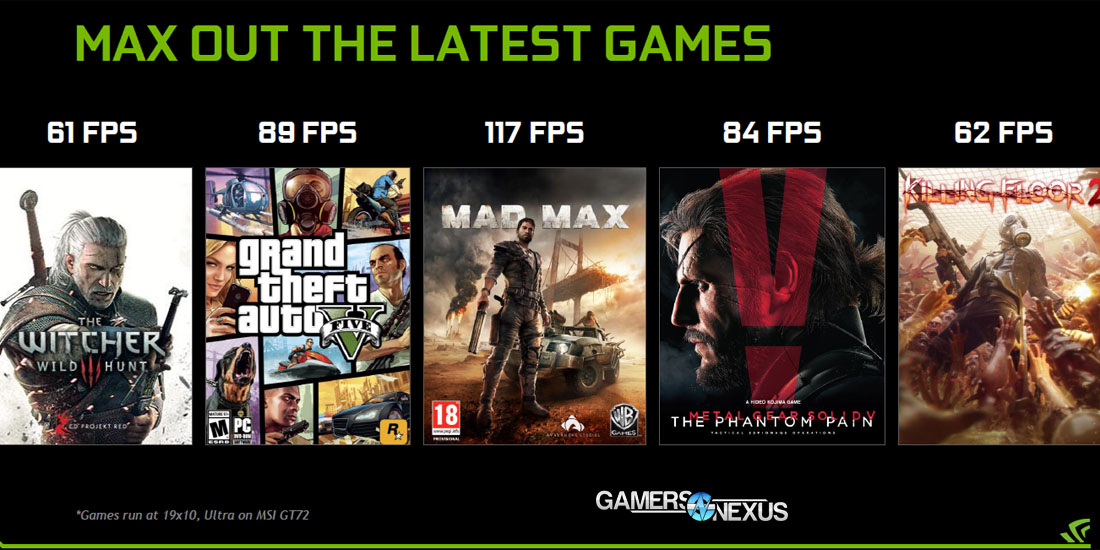 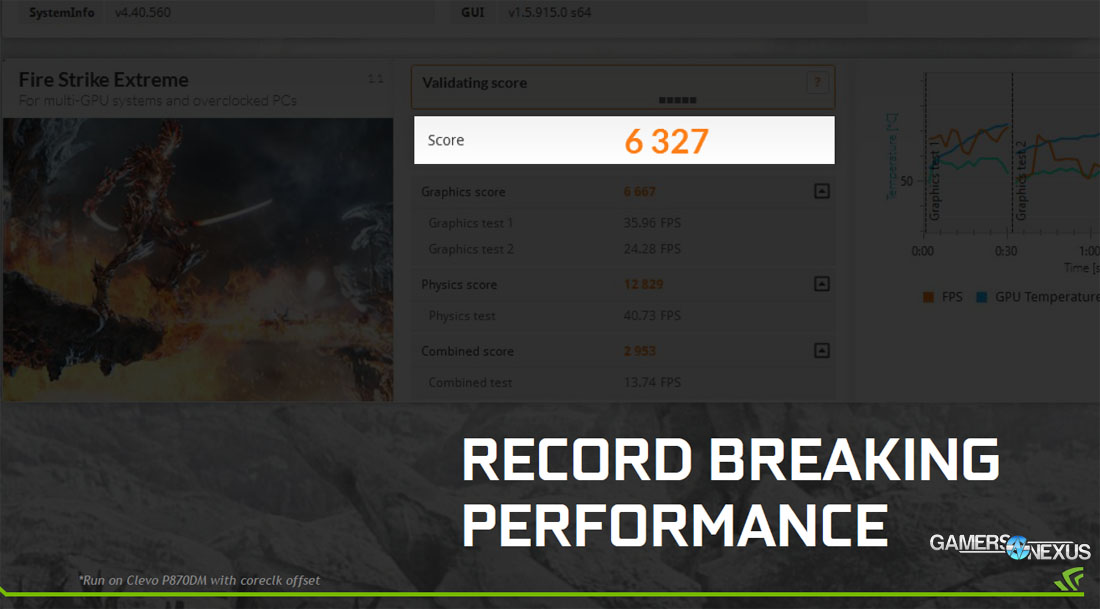 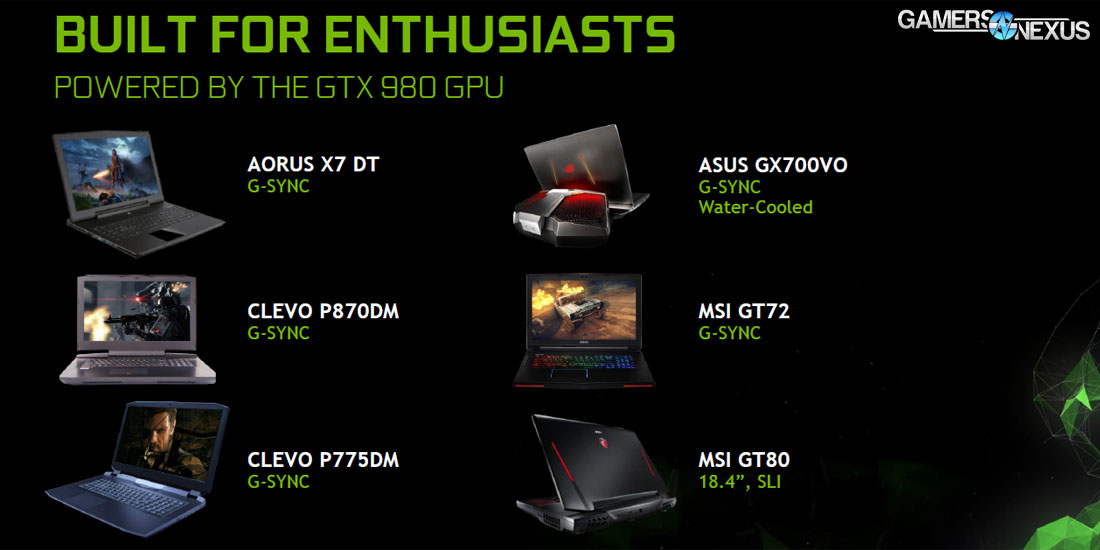 Thus far, we know the following notebook models exist with the GTX 980:

See the below photo gallery for more images related to the above laptops.

Low metrics were not provided, but the frametimes should be consistent with desktop GTX 980 frametime metrics. As always, a grain of salt with these benchmarks – they're provided by nVidia and we haven't run our own suite just yet, so we have no means of validating tests.

The GTX 980 was a strong video card launch, but it's been overshadowed a bit by the existence of the GTX 980 Ti. The GTX 980 is now the most powerful GPU that's been fit into a laptop (at least, for consumers) and doesn't disable desktop features – another first for high-powered notebook GPUs.

Thermals will be a concern, though our limited hands-on have suggested that this is potentially a non-issue; it will ultimately hinge on manufacturer cooling design. Aside from thermals, the cost vs. portability spectrum will also be limiting to consumers. We don't yet have all the notebook prices, but will follow-up as soon as they're made available.