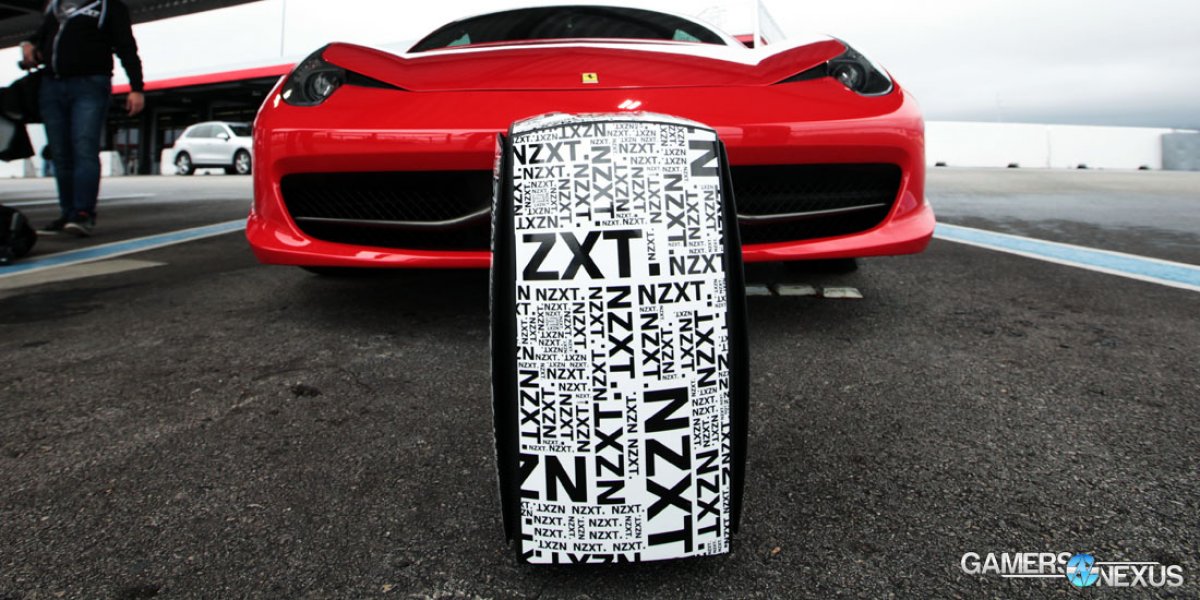 NZXT's latest case has unique side panels that are convexly curved and stamped from steel, a tooling process we discussed with Corsair earlier in the CES 2016 show. At NZXT's case unveil, we got a hands-on look at the case's exterior and a gathered some sorely limited information about the interior, but some of the most pertinent questions still remain unanswered.

It won't be until January 26, 2015 that we're able to release the name and price of the new mini-ITX mini-tower. We were also asked to wait for information about the interior of the case, to the point that NZXT didn't even remove the side panel (which had a blacked-out window) at its CES demonstration. At this point, we can only speculate as to what it looks like inside and how well it will perform in thermal testing.

What We Do Know 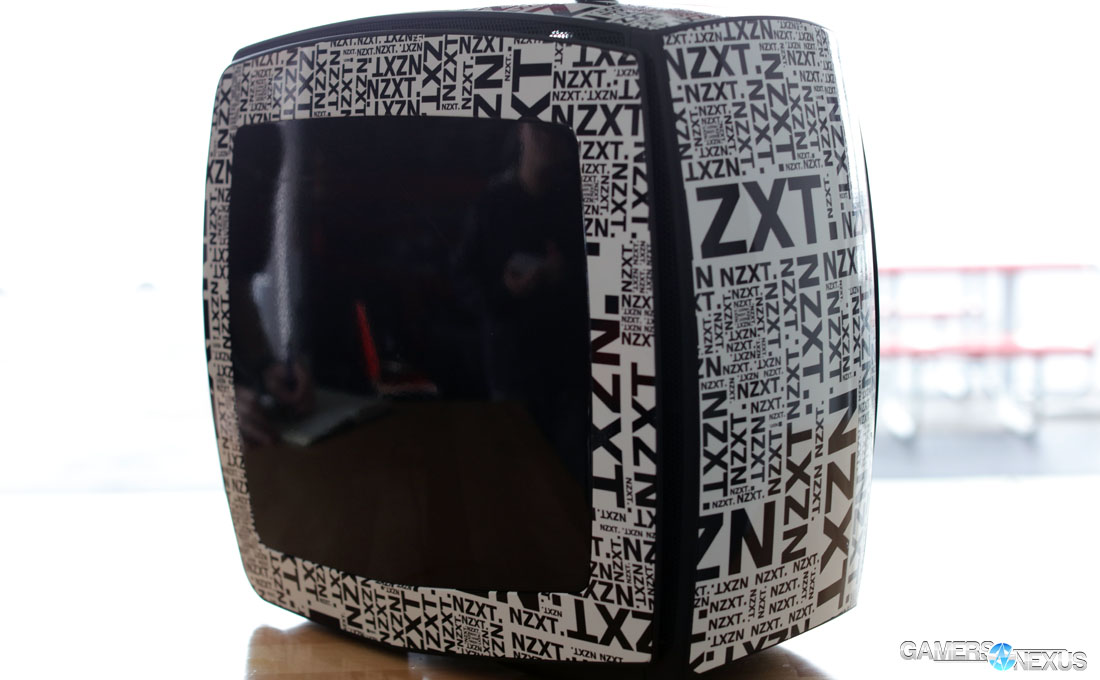 The design, two years in the making, was inspired by the Ferrari Italia 458, as witnessed by the beveling in the top and curvature on the sides. The chassis is steel with a plastic molding to connect it to the steel, stamped side panels. The left side panel will be available in solid color (black and matte white confirmed), windowed, or tinted windowed. The case, although intended to be targeted specifically for Small Form Factor (SFF), is about the size of a mid-tower when accounting for the bulbous top panel. The rest of what we're about to tell you is based on observation and industry experience, with no official confirmation from NZXT. 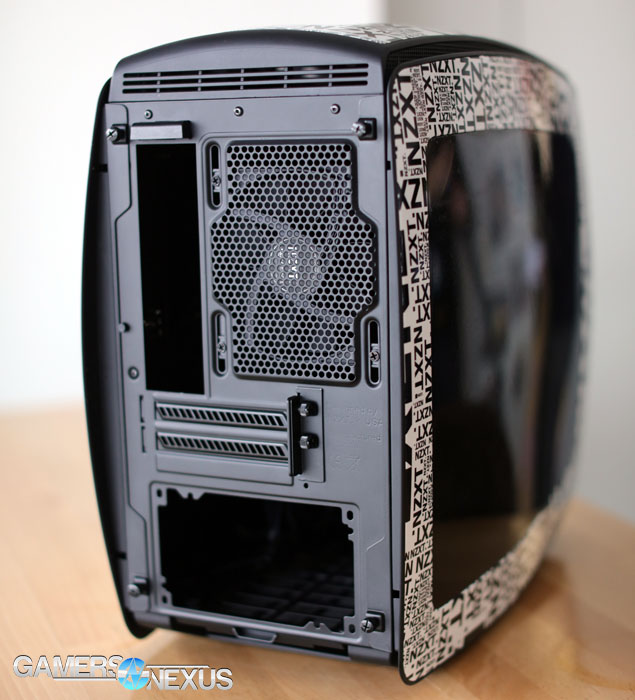 The representatives from NZXT stated that cooling is a focal point for this design. SFF cases struggle to produce reliably low thermals as an inherent design limitation. The size of this case may benefit its thermals in this regard; it's bigger than we might be used to for mini-ITX, but is therefore granted greater cooling potential for radiators and fans. From what we coud gather, it appears that there will be a single 120mm fan in the rear and two 120mm fans in the front. The amount of space inside appears to be ample for placement of a 240mm liquid cooling radiator on either the front or the top of the case. In order to pass cool air into the case, the plastic joining the steel side panels to the chassis is a honeycomb mesh in two locations. The bottom of the case is raised from the surface by two ~3cm tall plastic supports, another positive because bottom ventilation is often a problem in many PC cases.

The case has a power button, a slim power LED, two USB3.0 ports, and two 3.5mm audio jacks located on the top. The back of the case hosts NZXT's standard LED toggle button, as seen on the S340/N450. An ATX PSU mount sits in the standard bottom position with a pull-out dust filter located below, above which resides a standard I/O panel area, with two expansion card brackets located just below. Despite the case's larger size for a mini-ITX enclosure, its opt-in to only two expansion card slots does mean that 2.5- and 3-slot cards won't be compatible. That's not a large part of the market, but GPUs do exist that could make use of the extra slot.

NZXT's previous venture into the smaller-than-ATX market was its Vulcan, a micro-ATX enclosure that picked-up a niche following, but ultimately failed to meet market saturation. The Vulcan has clearly put a dent in the company's desire to aggressively take-on the SFF market, and the new NZXT SFF case's two-year development cycle is clear evidence of this. That's longer than it takes to engineer and fab a new CPU architecture. We've seen some of the oldest iterations of this case; it's gone through an unbelievable amount of change in its two-year development lifecycle.

This market is challenging. The BitFenix Prodigy created the niche, SilverStone makes the most performant and functional true SFF boxes, and that leaves NZXT taking the oddly positioned bigger-than-SFF, smaller-than-ATX slot. Without knowing how the interior has been finalized, it's tough to say where the mini-ITX box of micro-ATX sizing will land. NZXT's case is more comparable to Corsair's mini-ITX Air boxes, which, to this point, have not met expectations in the US market.

The case is also shaped in a non-standard way. It sounds a bit mean, but we've been using the codename "Whale" when talking about our content production for the case; we don't have an official name that we can provide at this time -- which seems an odd marketing decision that lacks foresight of building an article base in search engines -- and so we had to come up with our own. "Whale" stuck -- the convex sides do not functionally add any value, though they are genuinely unique. The appearance isn't going to be universally embraced. Our staff have conflicting opinions of the case's looks, ranging from "impressive" to, well, "whale." That's the nature of the subjective, though, and we'll leave the photos to your browsing for that aspect.

NZXT has historically been thermally-challenged with its blocked-off paneling, a sacrifice made for aesthetics and silence in the case of the S340, H440, and N450 cases. In this SFF case, thermals are less an immediate concern because you cannot run SLI or CrossFire with ITX motherboards -- they've only got the one PCI-e slot -- but we'll be heavily evaluating its dissipation efficacy when under load. NZXT's larger size might benefit airflow in an ITX case, whereas most ITX cases are restrictive and tight (see: SilverStone) with serious cooling hurdles. The NZXT design is sized in a way that better accommodates standard installation layouts, it's vertically mounting the board (ATX installation), and is effortlessly transported. We still like the move away from optical drives, and NZXT gets a nod here as being the definitive first in popularizing that movement, originally with its H440.

There's a lot left on the table with this case. We'll post a new article once we're able to analyze the case's interior and publish its name.