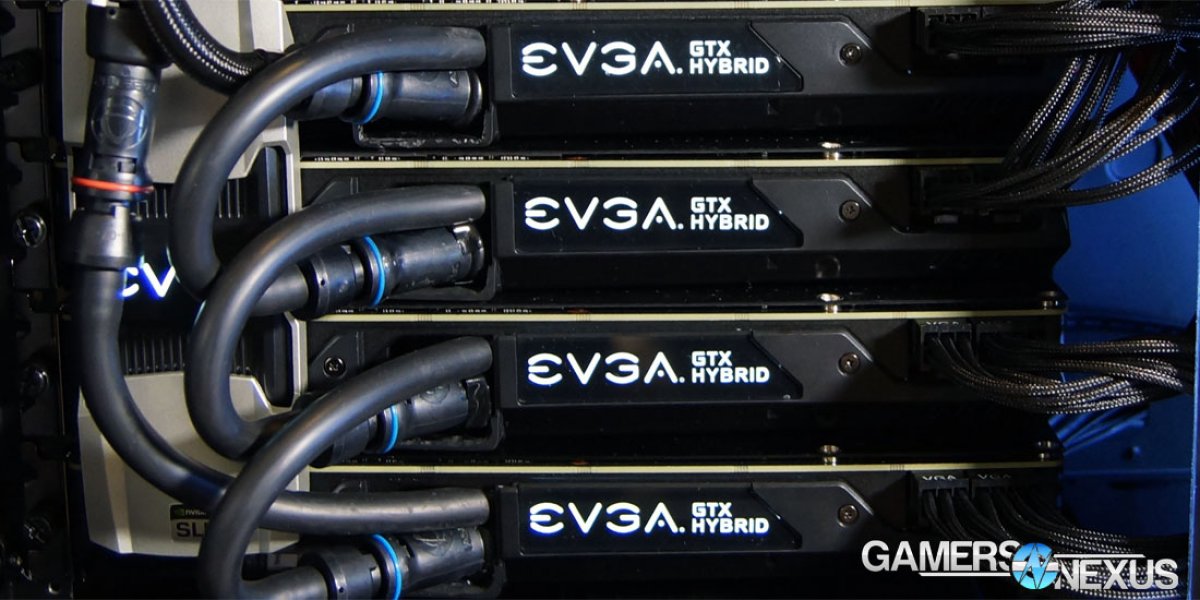 Quick Disconnect (QDC) liquid cooling has been concepted a few times before. For the enthusiast and DIY market, there’s not been much of an uptake on the QDC quasi-open loop liquid cooling – but there’s also never been a major marketing push. Our CES 2016 visit with EVGA had us hands-on with a quad-SLI + CPU quick disconnect liquid cooling setup, taking from the well-received GTX 980 Ti Hybrid design and expanding into sequential liquid cooling.

As seen in the photos and above video, EVGA’s demo configuration for quick disconnect components featured a quad-SLI graphics array with GTX 980 Ti cards. A 360mm radiator was top-mounted, connected via QDC valve (EVGA calls this ‘QRC,’ or Quick Release CPU) to the CPU block; the block is an EVGA design OEM’d by Asetek, as are the QDC components. The CPU’s exiting tube connected to the first GPU – fed in to the GPU block as normally – which then routed out and into a QDC (“QRG”) valve for the second GPU. That carries on two more times, at which point the loop ends and returns to the radiator as normally. 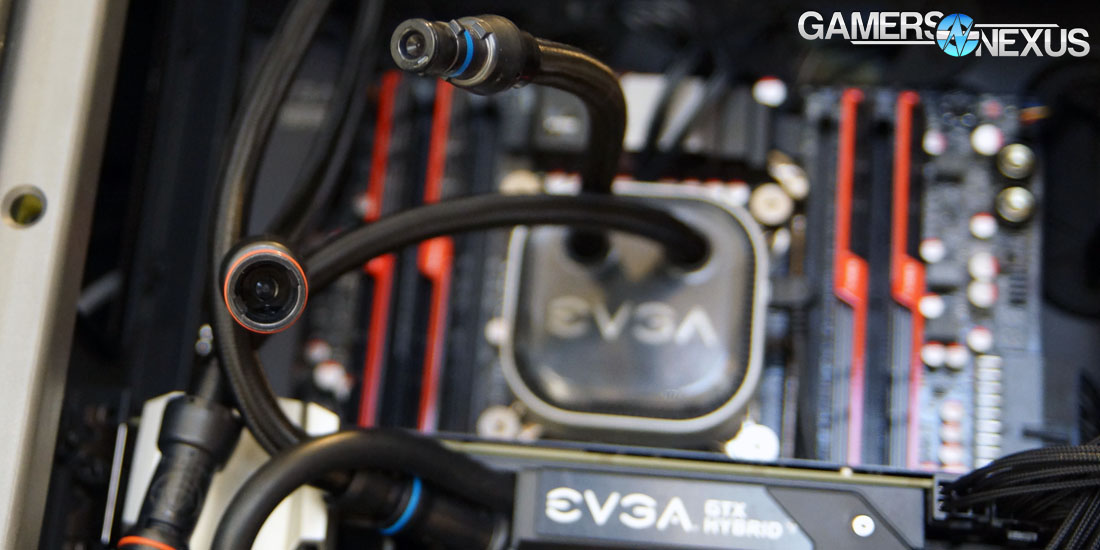 The quick release valves are connected and disconnected with a twist and click. Inside the QRC and QRG disconnect valves is a plunger and spring mechanism. When the valve is closed, the spring tension increases (from the action of threading the valves together) and causes the spring to compress, which then forces a plunger through and opens the valve. This allows the liquid to begin flowing, theoretically without leakage. Closed, the spring is loosened (tension removed) and the plunger withdraws, blocking the valve and prevent liquid from flowing. We’re told that the connection cycle endurance of the valves is excessively high, somewhere in the thousands to tens of thousands (no specific number at this time).

EVGA’s QRG 980 Ti setup is not yet priced. The cards will be sold with the pump mounted under the faceplate, with two extruding QDC valves from the top of the card. Users then buy the radiator (larger radiators are required as component count is increased in the loop) and optionally add a CPU block. That optional CPU block mounts with Asetek mounting hardware and is Asetek OEM’d, but designed by EVGA. An RGB LED sits under the “EVGA” branding on the block, connected via USB to the side of the pump block. We know the QRC CPU block setup (block +  extruding QDC valves) will be priced somewhere within the $60, $80, or maximally $100 range. The separate radiators may start as low as $50 for a 120mm rad + extruding valves, but pricing is not final for either of these products. GPU price for QRG products was not disclosed at this time. 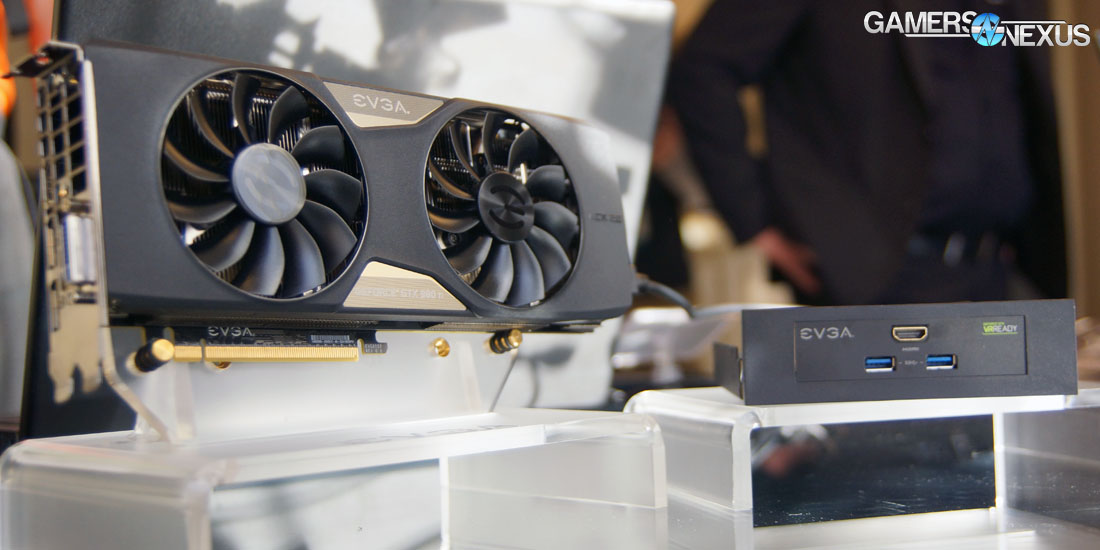 A non-liquid GPU also made its debut at the CES 2016 suite, the GTX 980 Ti “VR.” This VGA was made in collaboration with nVidia, who are presently making a massive VR push for both the Vive and Oculus Rift headsets. The “VR” badge on EVGA’s new 980 Ti represents its convenience changes made to better accommodate VR HMD cord length. There’s no technological innovation here, really.

The card hosts an HDMI port at the front (far right of the card), which then connects via HDMI to a passthrough cable that communicates with a front-panel (5.25”). That panel hosts 2x USB3.0 ports and 1x HDMI port, all of which are used to connect HMDs and relevant peripherals. The passthrough doesn’t do anything beyond a simple shortening of the cables and removes the need to connect to the rear of the system. We’re not sure how tolerant VR HMDs are of passthroughs, but there’s no immediate reason that it’d be problematic to extend length by a foot.

The only real issue with the 980 Ti VR is its reliance on a 5.25” panel. NZXT and Corsair have both heavily moved away from 5.25” ODD bays, and VR systems will likely find their place in living rooms – often using SFF enclosures rather than larger mid-towers. 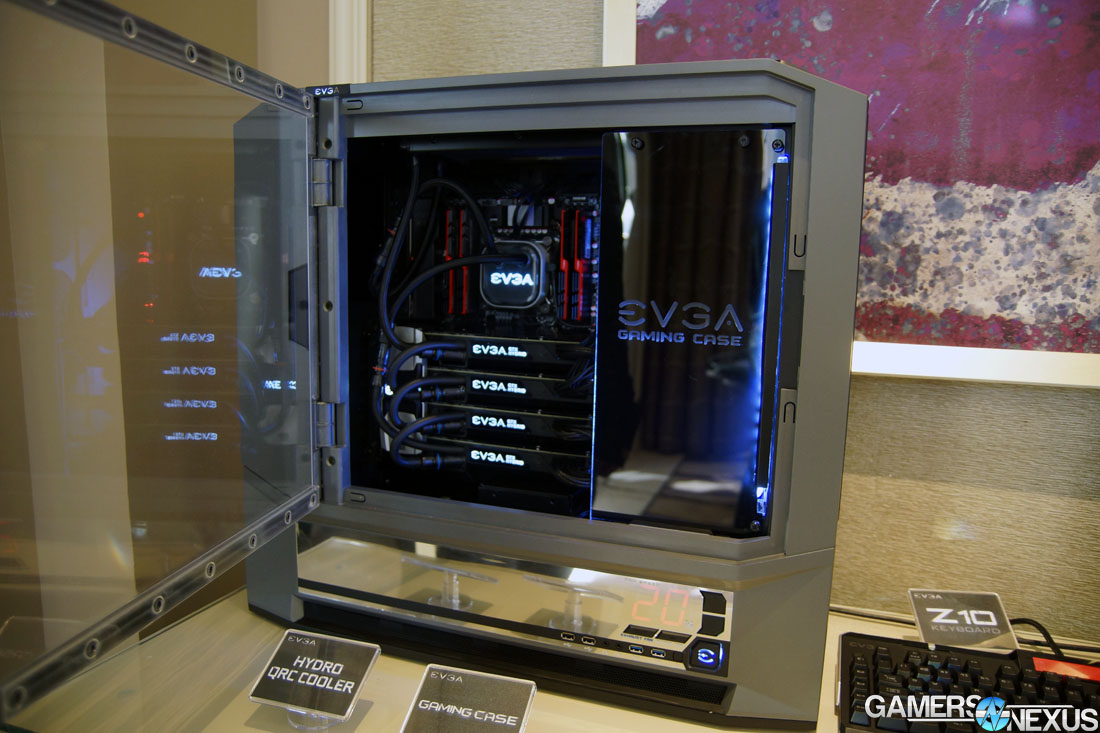 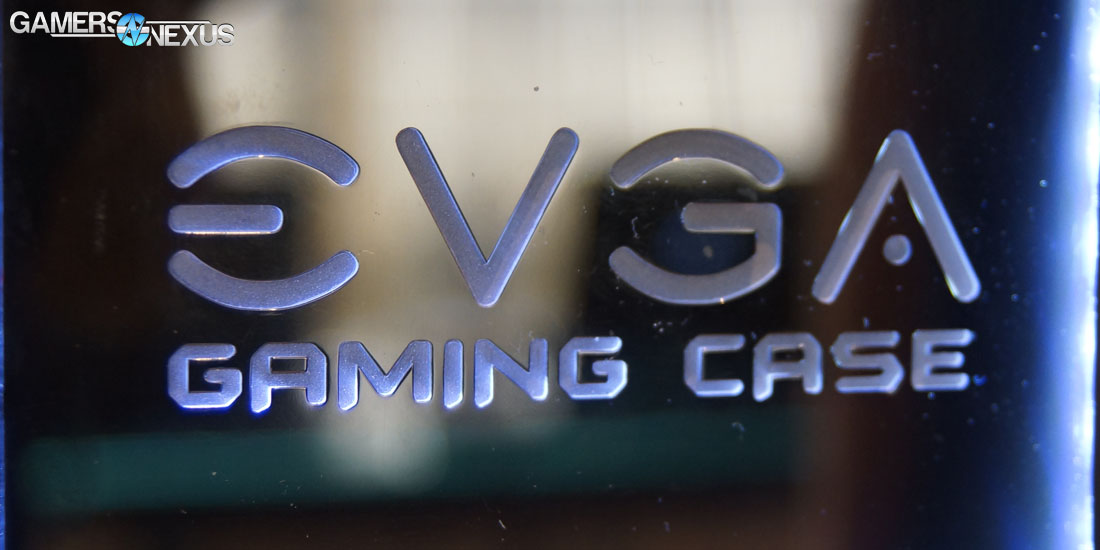 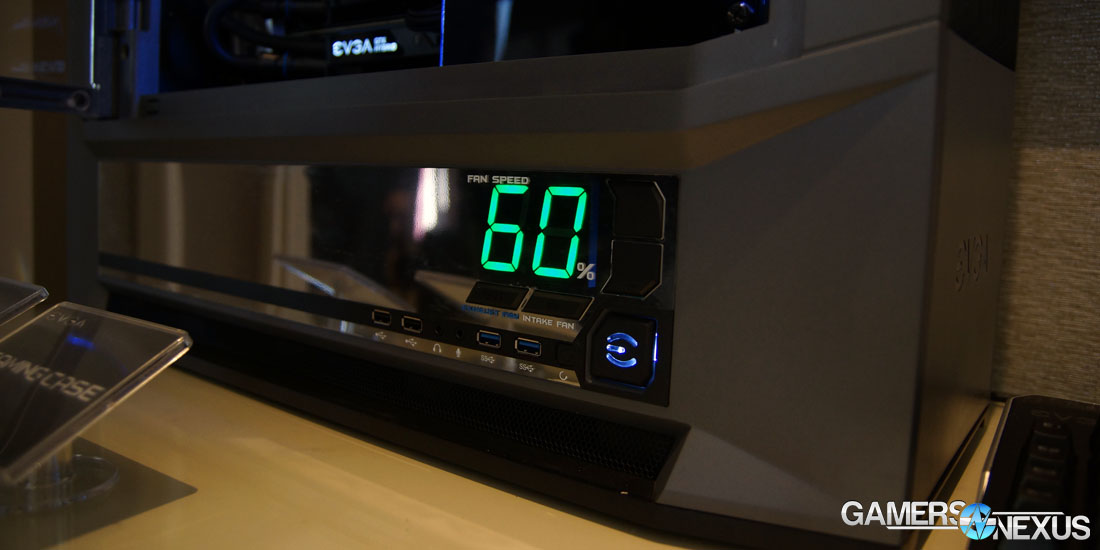 This case is still in production, but will begin shipping later this year. We’re not yet sure who OEMs the case – not EVGA – but will update when we find out more about its origins.

The enclosure currently uses large plastic paneling on all sides, though differing SKUs may replace that with steel paneling in the future. Everything about the case is taking the ‘big’ approach – the huge plastic paneling covers the rear of the case as well, making for cable management of rear IO, but increasing bulkiness considerably. This, we think, is the weakest point of the case despite its clear attempt at creating a functional management pathway.

The fan controller is the most compelling. Toward the front-right of the left side panel rests a fan controller, depicting LED-backlit text for current fan speed (green for intake, red for exhaust) and offering mechanical switches for fan speed changes. Toward the right side, where drives are normally located, the cases is fitted with a tall, glass panel and laser-etched EVGA logo, also backlit with LEDs.