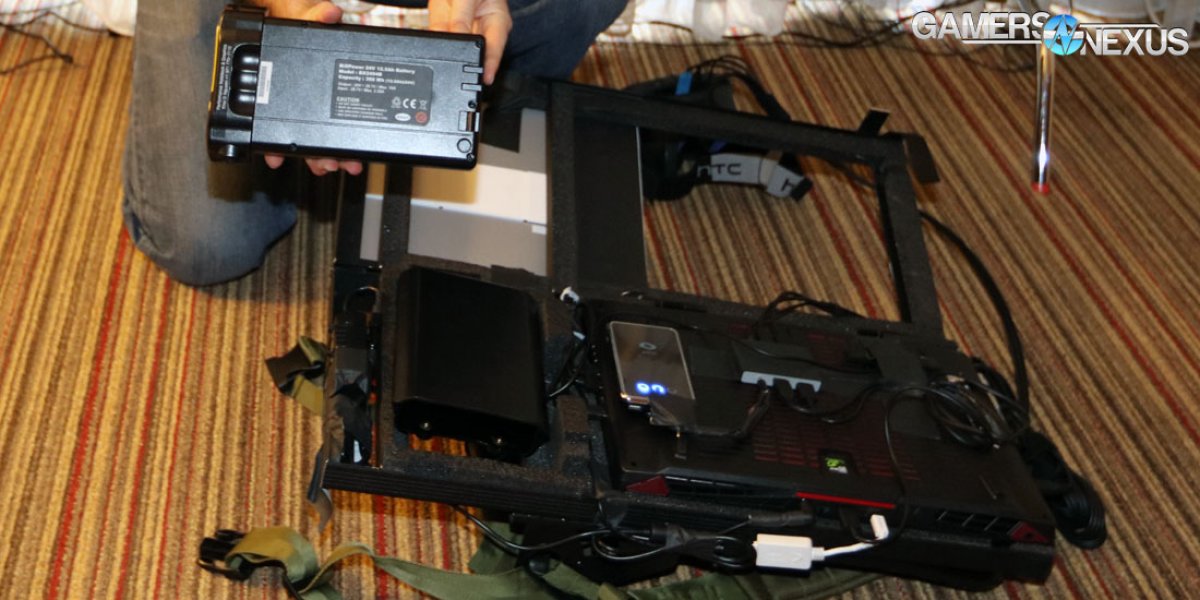 By having all of these high-powered machines on display, Intel's intention was to demonstrate that they believe gaming laptops are now falling into one of three categories: slim (~20mm or less), muscle books (heavy, all features included), and ultra portables (with external graphics). The overarching idea driving the entrie suite, however, was that no matter what class of gaming laptop you buy today, the performance gap between desktop and laptop is steadily diminishing. NVidia has also been pushing this point with its mobile GPUs, now backed by the comparatively militant GTX 980 non-M full GPU. 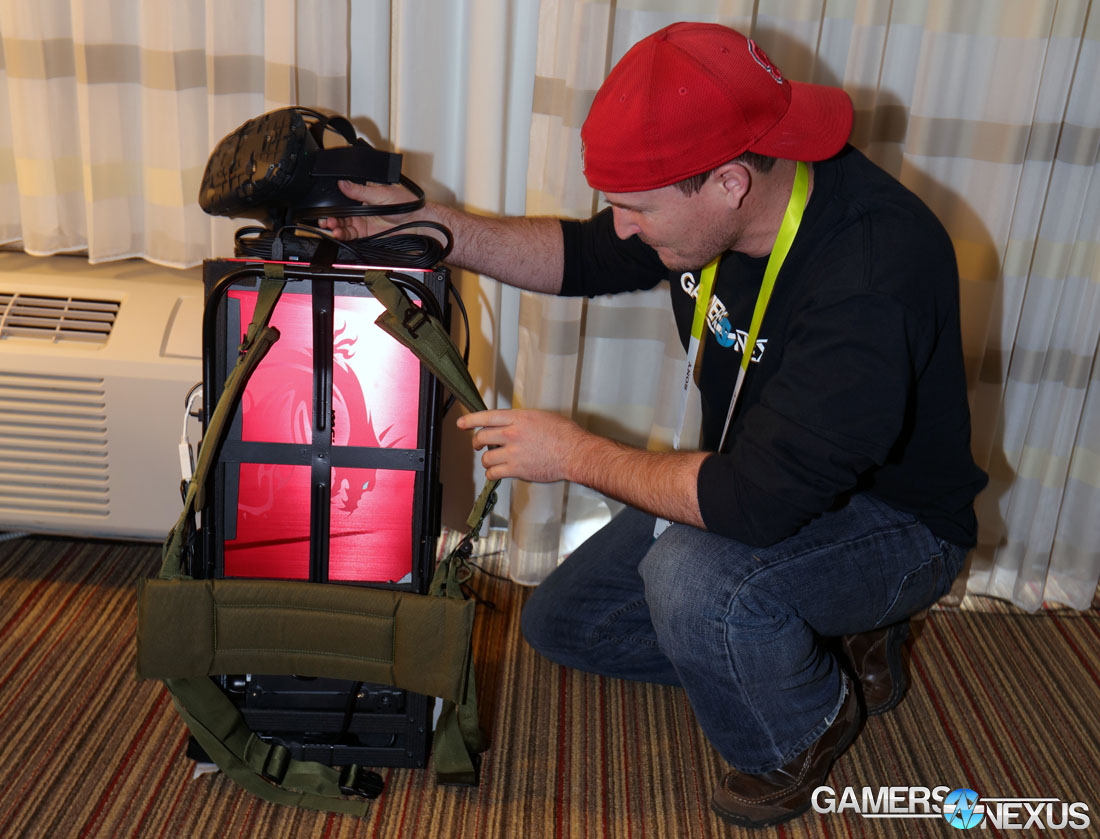 Intel had two main virtual reality setups. The first was outfitted with an MSI GT 72 Dominator Pro sporting an nVidia GTX 980 and Oculus Rift headset. Two of the GN staffers tried a demo of Lucky's Tales, a previously announced Oculus title, and both agreed that the experience was on-par with the desktop equivalent. We then turned to leave and noticed a haggard-looking hiking backpack frame... and this is where things got interesting. It was something we'd been hoping for since our last VR experience at PAX Prime: a completely untethered HTC Vive. We’d spoken with an HTC engineer at PAX Prime and talked about the possibility back in August, even pacing through all the hurdles that would have to be overcome. We eventually agreed that it could be a really cool concept, but that no one would do it any time soon because it just wasn't the right time. VR to the home was relatively new, and being totally wire free was probably a complete iteration away. Despite that, there it was – the Vive backpack alpha version, a backpack frame with several custom parts to make the untethered experience a reality.

Internally at GN, we've been calling the rig a "jetpack."

Power’s a big problem here. High-powered graphics and computing devices drink watts; Intel’s (current) solution used a 300Wh battery that weighed-in at about 10lbs. The team considered a lighter, 100Wh battery, but calculated that it would only provide about 10 minutes of full-powered gaming. The heavier 300Wh battery provides about 45 minutes of gaming, and from there it was just a matter of mounting the same laptop used in the earlier Oculus Rift demonstration, then connecting the Vive hardware to it. The Vive's communications hubs were "expertly" mounted with gaffer tape and the main hub was powered by a separate, small mobile power pack. The usually long headset cables were then wrapped-up together on top of the pack and routed to the headset. The one extra feature on this pack was an external monitor used to interface with the closed laptop. At the moment, there’s no way to launch the Vive applications while using the Vive itself as the PC display, so we coped with walking around with a monitor dangling from the bottom of the pack.

The experince was inspiring. One of the first things we did was walk in a circle to be certain that there were no wires, clearing that first mental block to freedom. Until now, the Vive’s two major issues have been cable management during use – we normally have booth presenters untangling us while walking aroudn – and limited room size due to signal degradation as the display and data cables lengthens. 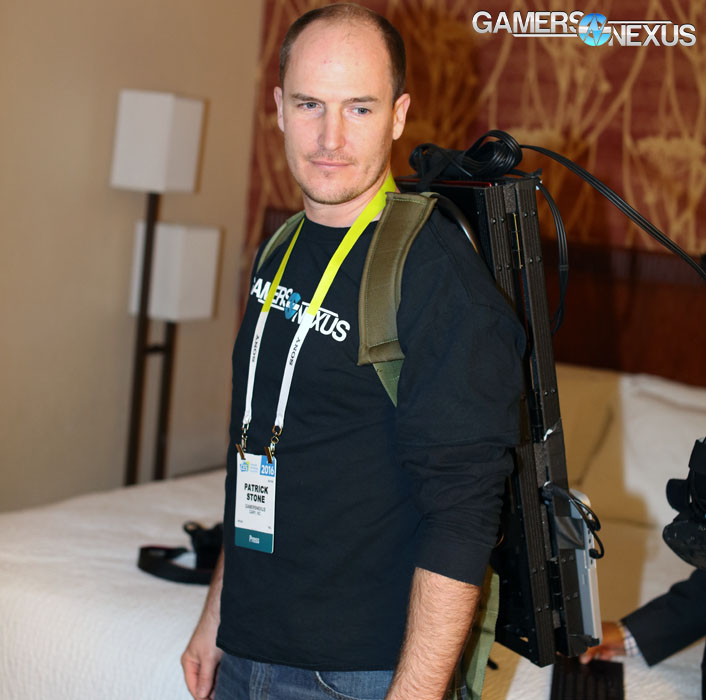 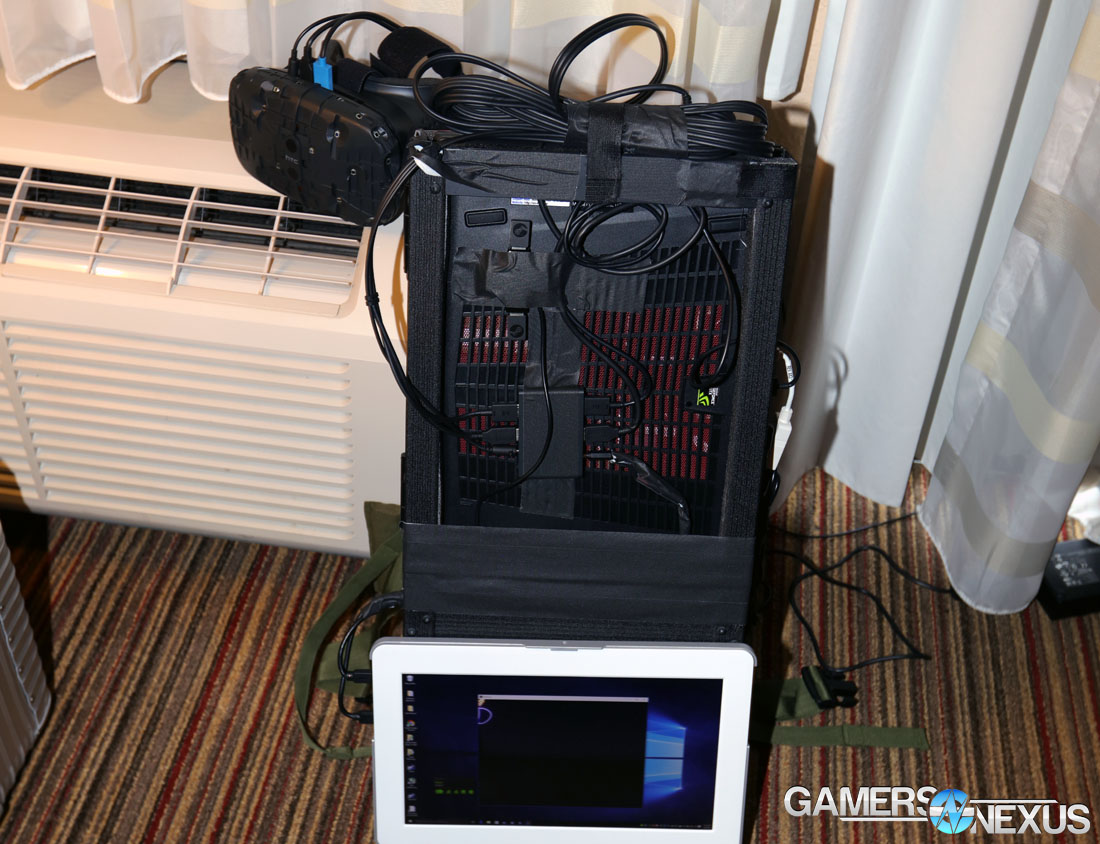 From there, we moved about freely, testing boundaries, interacting with the hand controls, kneeling, squatting, and observing the weight on the pack to see if it was a distraction. Total weight of the whole rig was probably around 40 lbs., but bigger guys, like our tester, will probably find the weight of the rig inconsequential. The freedom of movement was enjoyable, and we look forward to the hopeful progression of this idea. There’s potential for location-based (or large-house-based) entertainment facilities to deploy VR in less claustrophobic spaces if given the mobility generated by such a solution. It would be nice to see the next prototype need only a single power source, removing the mobile battery, and remove the need for an external monitor (the Vive may move this direction on its own).

We're also eternally hopeful that Elon Musk will hurry up and make better batteries to lighten this design.

Other highlights of the Intel suite included relatively new, unlocked, laptop-specific, K-SKU Core i7 CPUs. We’ll be overclocking one of these in the next few weeks. The Intel representative used an Alienware laptop running a synthetic load to demonstrate that the system could still maintain reasonable temperatures. We were also interested to learn about the release of the quad-core laptop Core i5 CPUs.