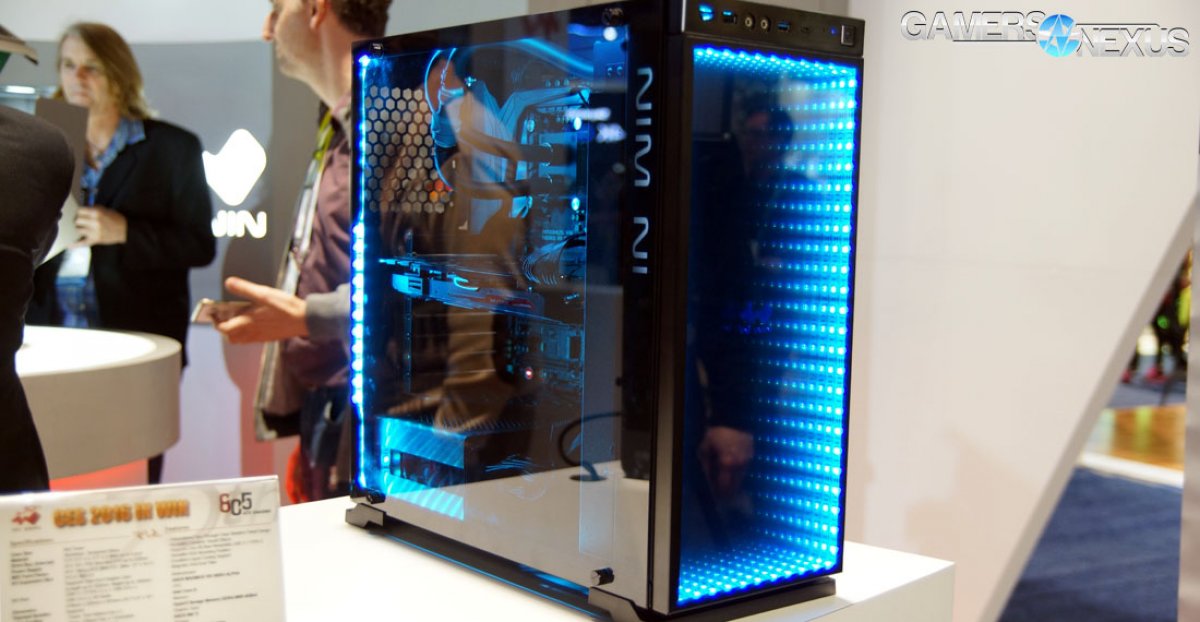 Without fail, five years running, case manufacturer In-Win has presented the most definitively impressive and artistic PC cases at CES. The company sometimes acts like boutique car companies: They don’t seem to understand “stop,” adding to designs until they hit $400, $800, and – in one remarkable case -- $2400. In-Win does make lower-end, affordable enclosures, but that spotlight is nonetheless stolen by what are clearly intended to be “halo” products; of course, there’s nothing wrong with that for a tradeshow.

CES 2016 wasn’t any different. In-Win had its 805 and 809 enclosures representing the affordable market (to some degree, anyway), with the $800, 30th anniversary H-Frame and $2400 H-Tower fronting the high-end. The video immediately below shows the H-Tower, the next one (and article) carry on with the 805. A photo gallery is below the article.

That’s the In-Win H-Tower, kindly nicknamed the “Transformer” for its massive, articulating paneling, actuator, servo arms, and sheer size. The system we saw was built by BS Mods, a mod shop that produces some of the highest-quality case mods we’ve worked with. Because In-Win’s case is very limited edition, expensive ($2400 MSRP), and already non-standard in every way, BS Mods was told to limit the build to component installation and minor tweaks. A red In-Win logo was added, a “BS Mods” plate to cover the “sample” serial number, and a system assembled with Mayhems Aurora liquid. 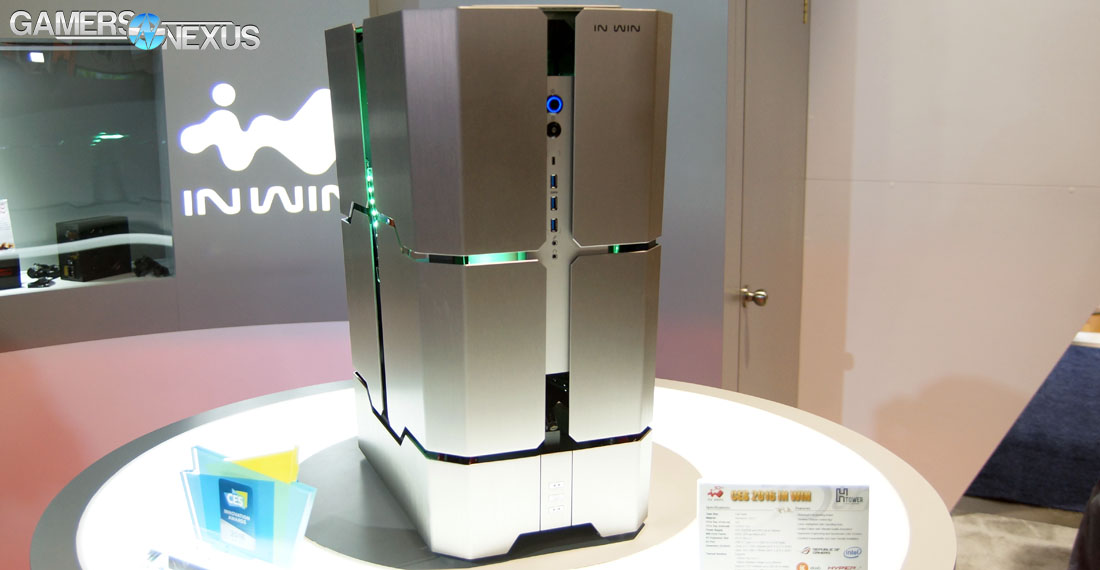 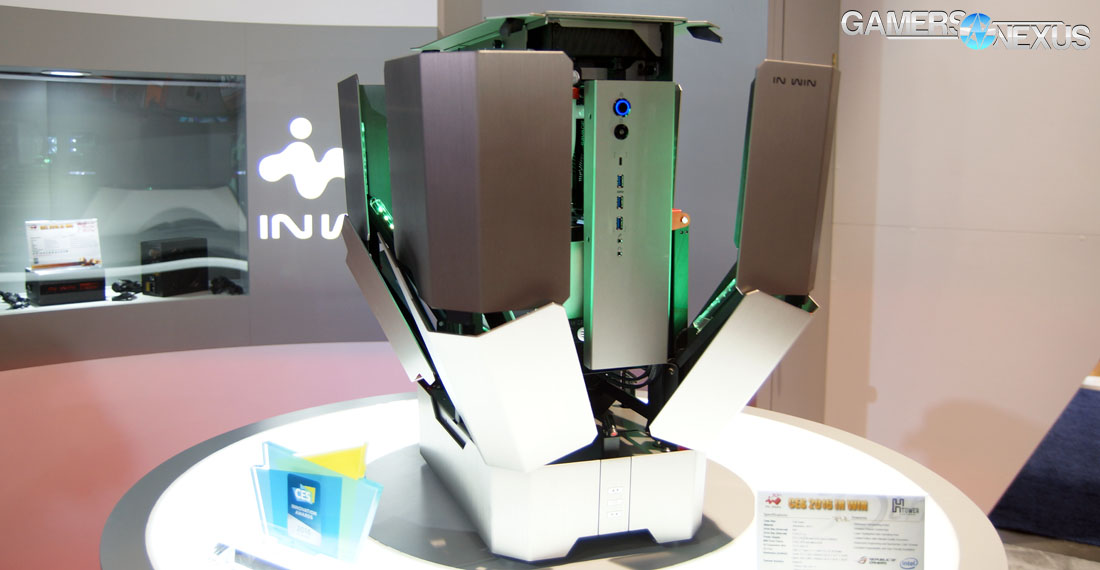 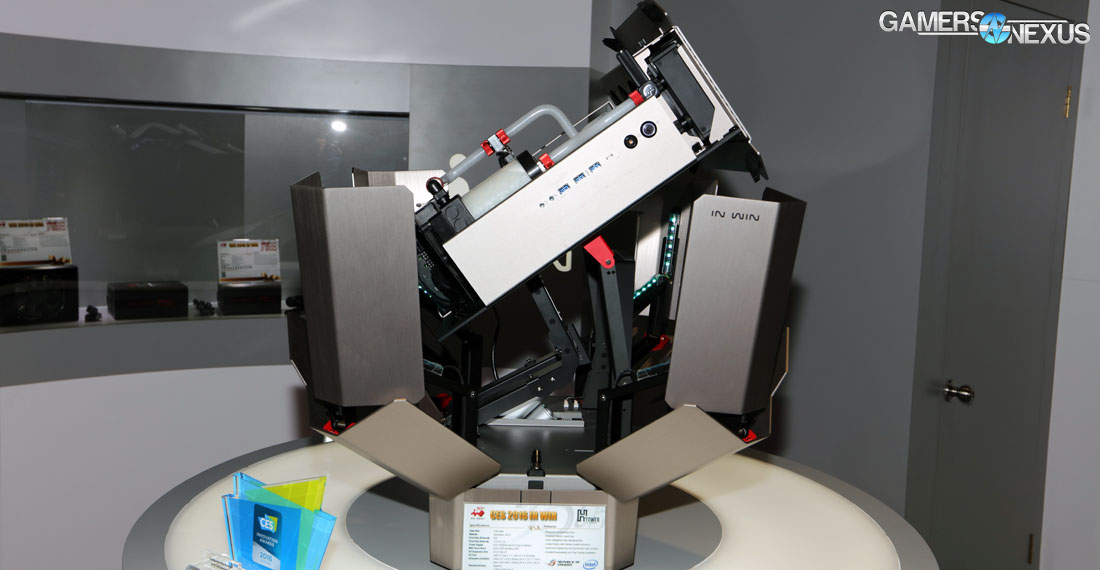 The frame’s function is straight-forward: A piston sits under the motherboard tray and waits for user input. Once the user executes movement commands by phone (via Bluetooth-enabled app) or with physical, on-case buttons, the piston pushes up, forces hinged beams (attached to the board tray) upward, and the tray begins leveling out in a horizontal orientation. This can all be seen in the video, with BS Mods’ Bob Stewart controlling the robotic action from his phone.

Also shown in the above video, the In-Win H-Frame enclosure is more similar in price and not-robotic tendencies to last year’s S-Frame. This $800 enclosure burns its material cost on mirrored, tempered glass on both sides, thick aluminum paneling (2.0mm in some areas), and on a custom, included PSU. In-Win’s PSU mount is a custom form factor – it’s wide – to make for what the company calls a “more beautiful” fit. A semi-transparent label panel on the PSU shows its 1065W potential and fits the mirrored exterior of the enclosure, gold cross-bars covering the PSU’s top-side fan. The gold accent is consistent with case ID, most matching In-Win’s custom, gold-colored thumbscrews. 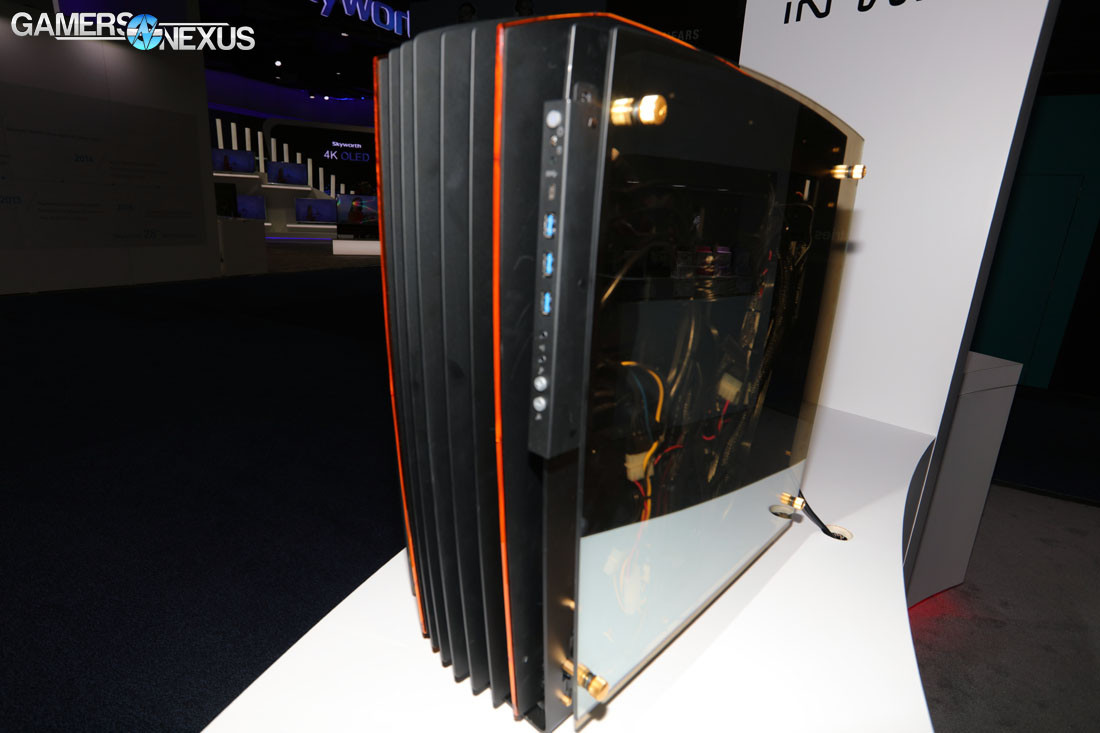 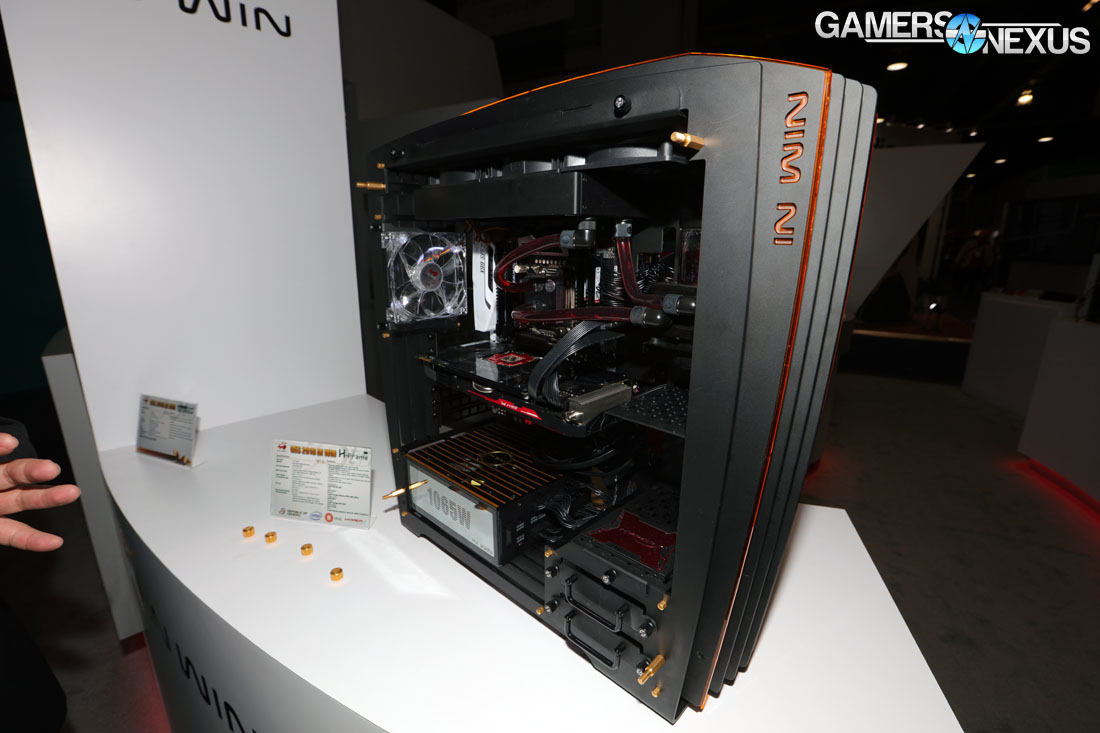 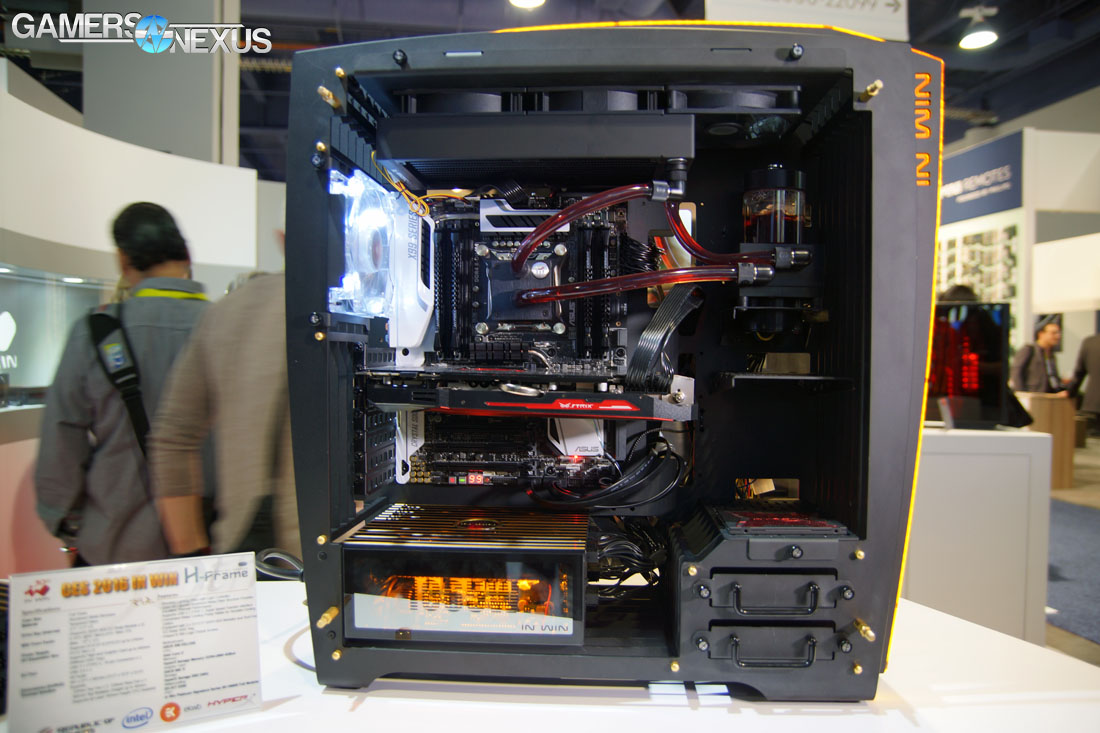 We asked about the stock fan and cooling spec and learned that the case will (probably) not include any fans. “Users always have [specific] colors and looks they want, so we don’t include fans,” In-Win’s Andy Che told me. And he’s right – at this price, $800, it really doesn’t seem too relevant that the buyer has to spend a few bucks on some fans. It’s very much an art piece.

This is an effect we’ve previously seen in BS Mods’ Enermax Ostrog mod, but hadn’t yet seen in production cases.

The 805 uses a glass front panel and withdrawn mirrored surface, between the two resting an RGB LED strip (somewhat resembles the NZXT HUE+ strips, though we’re not sure what’s actually used). In-Win isn’t sure if its 805 will make it to market with the ‘infinity mirror’ effect, and they’ve asked that enthusiasts and consumers inform the company if the 805 infinity mirror paneling is desirable.