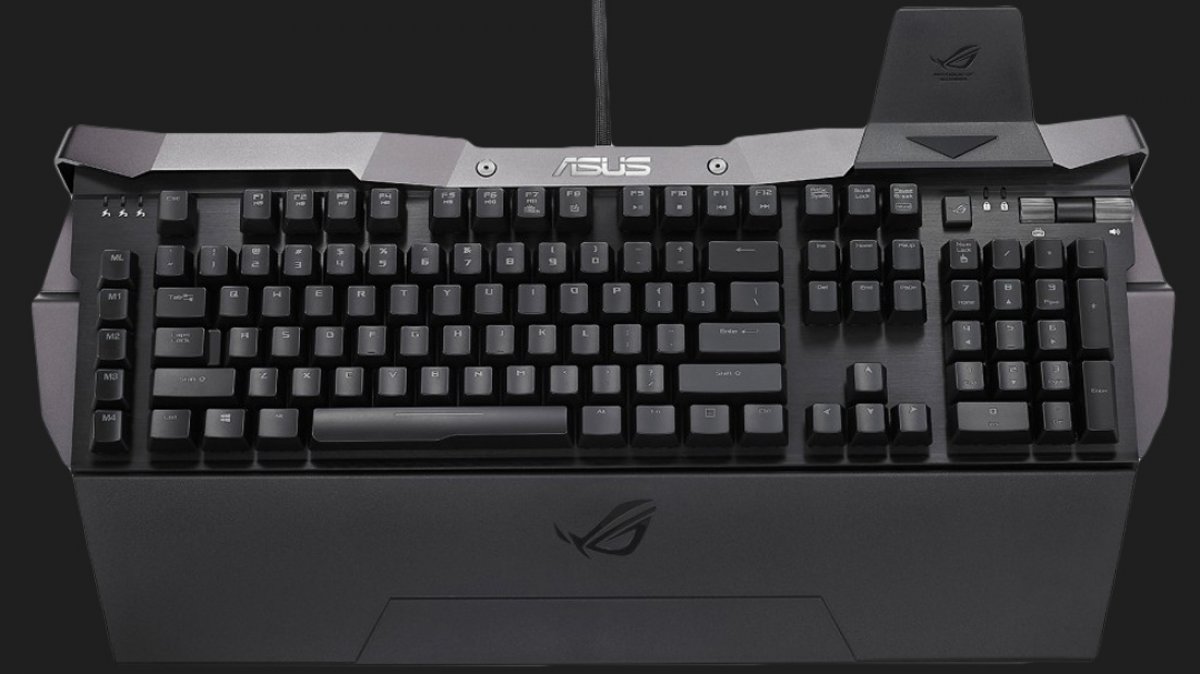 Maybe that's a bit hyperbolic – we've seen uglier keyboards. But the Horus GK2000 certainly is interesting – and we mean that in the way a spouse might say “Oh! How... interesting.” It's gone heavy on the metals, using a CNC'd 3mm sheet of aluminum for the keyboard's enclosure (it looks plastic in some photos – but isn't), a brushed metal face plate, and even a metal volume roller. Taking a page from Logitech's books, who recently and unrelatedly took a page from Corsair's books, ASUS has introduced an outcropped phone dock in its attempt to take as much volumetric desk space as possible. The dock rests atop aluminum "wings" on either side of the keyboard, which are presumably used for aerodynamic efficiency when thrown from windows. Just from first looks, we can tell that the dock would vertically obstruct most monitors (something Logitech discovered and resolved with its G410) – though it's removable from the perch and can be desk-bound, if you want something more sophisticated than a pocket or origami phone rest.

In its marketing materials, ASUS calls the GK2000 “much like a command center,” boasting availability of multimedia keys – something we actually do like – and USB / audio pass-throughs. The pass-throughs necessitate additional cabling for fully powered operation.

Making careful use of exclamation points, ASUS also proudly highlights its detachable phone stand (!) and individualized LED backlighting (!), features which, along with the 1700 grams' worth of metal, contribute to what is sure to be a high price.

Opinions aside, we actually would like the keyboard if it shed its superfluous outer shell and slimmed-down to a simpler design; granted, they'd then be competing with incumbent peripheral manufacturers who've got the market cornered. The keyboard uses Cherry MX Red switches. We don't yet have release dates or pricing information, though there's still hope that the former is "never."