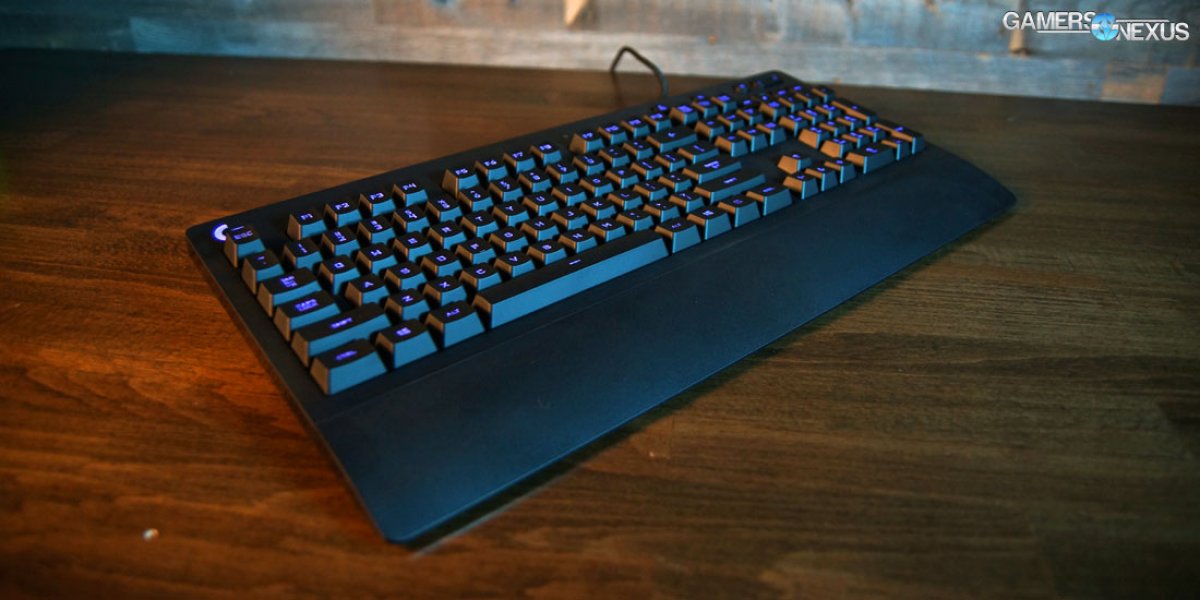 The G213 RGB keyboard uses membrane switches with a tuned force profile, slightly raising the actuation force to somewhat mimic a more tactile feel. Read about keyboard switch types here, if curious for more info on the specifics. For someone who really doesn't know what a mechanical keyboard is, why they're so widely liked, or is wandering through a Best Buy equivalent for a pick-up board, the G213's market positioning could make sense. We'll talk about that more in our review. For folks who are hardcore about mechanical switches, the G213 isn't really meant to hit that market – even with the tuned profile. There is no N-Key rollover, but an anti-ghosting matrix is in place. 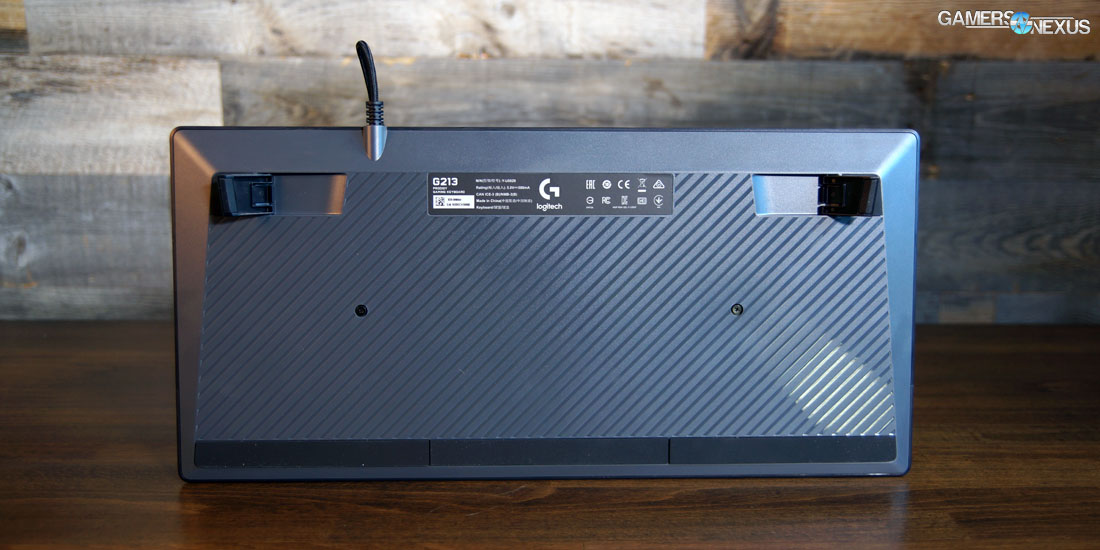 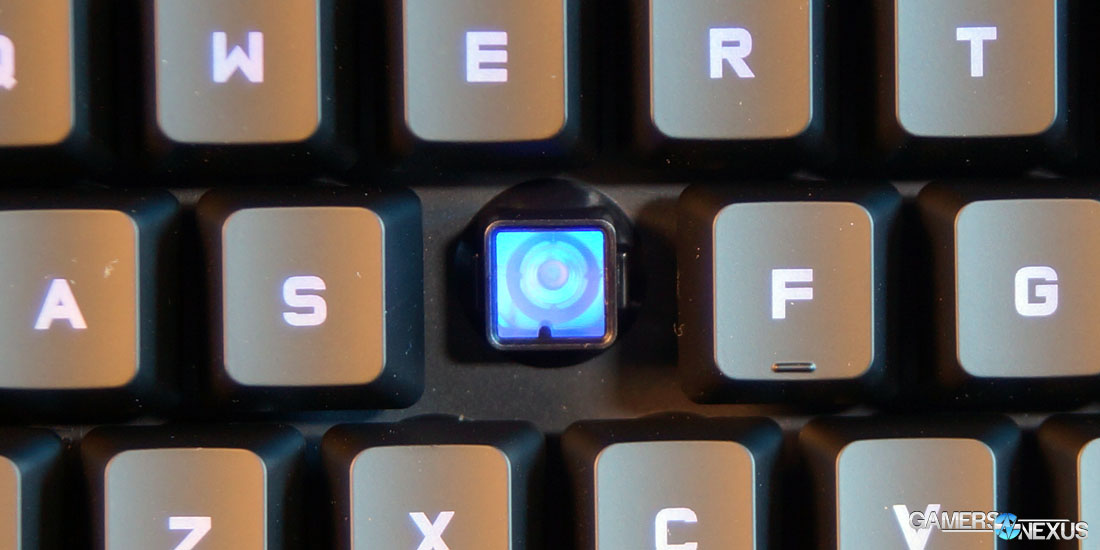 As for why a membrane keyboard would cost $70, a large part of that cost is built out of the RGB lighting, faster poll-rate (500Hz report rate), water resistance (tested to 60ml), separate media keys, and the switch tuning. We also noticed that the switch housing has a slightly metallic interior, which would theoretically help reduce light bleed – though whether or not that was the actual objective, we are presently uncertain.

The keyboard strikes as us potentially more marketed toward folks outside of the core enthusiast audience, and stretches into the hole in the market where the G11 once sat.

Wait on purchases for our review, of course, but that's the basics. We'll have Michael Kerns look at this keyboard shortly; he just reviewed the G610 recently. 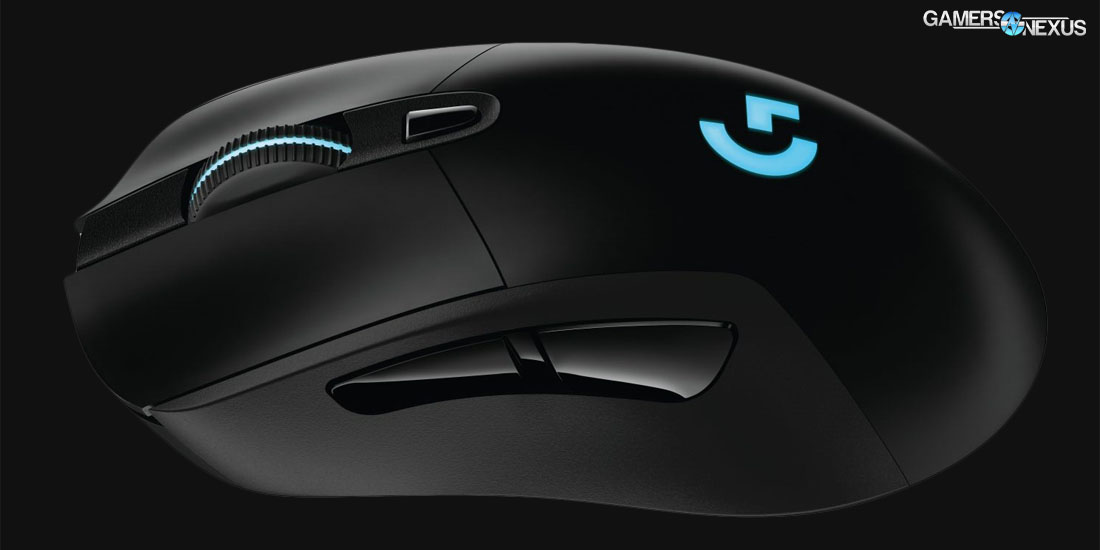 The G403 mouse is another in Logitech's new-found covetous eye for simplicity, sticking with two thumb buttons, LMB/MMB/RMB, and a DPI button. The company technically advertises “6 programmable buttons” – and is technically correct, insofar as LGS' control over the three primary buttons of any mouse – but buttons more likely to be programmed are limited to the two thumb buttons and the DPI button. LGS can communicate with the mouse to create five DPI profiles for quick switching, with a total range of 200-12,000 DPI.

Like most half-decent gaming mice presently available, at least in the mid-to-high performance markets, the G403 reports at 1000Hz and uses a PMW3366 sensor. Intrinsic to this sensor is its lack of any input filtering, smoothing, or “acceleration” (speed-related accuracy variance, per our earlier discussion with Logitech's Chris Pate).

Logitech is shipping two models of the G403 Prodigy mouse: Wired and wireless, respectively priced at $70 and $100. The wireless unit deploys the same wireless components we discussed in the G900 review – we still maintain that mouse is the best on the market – and exhibits the same radiation patterns and behavioral consistency with wireless transmission. In theory, anyway; that's the one unit we haven't yet received.

The wireless model has a 22-hour run-to-die life, but can be used while charging and plugged in. Wireless frequency is 2.4GHz with a 1ms report rate, with click latencies comparable to what was seen in our G900 review.

Both the wired and wireless G403 mice include a 10g weight, yielding a G403 (Wired) with a weight of 90 or 100g, or a G403 (Wireless) weight of 107g+. Durability is rated the same as almost every Logitech mouse we've recently looked at, with a 250km distance rating on the polytetrafluoroethylene feet. Click input is rated for 20 million actuations on the switches. 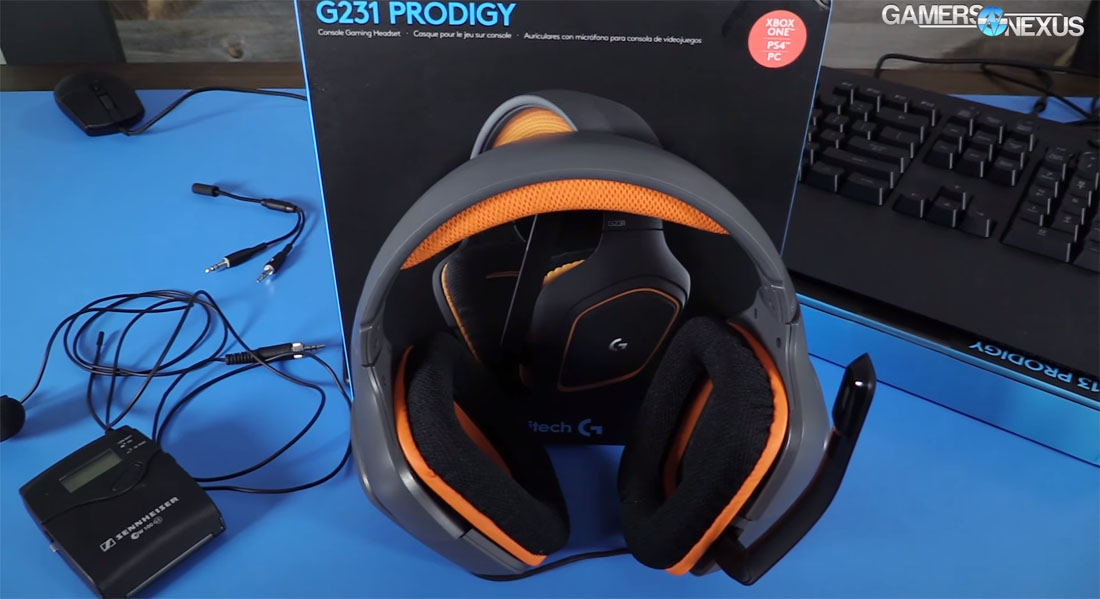 We've spent the least time with the headset thus far, but can provide some basics: The unit is largely comparable to the existing Logitech G430 headset, but has added a splitter for more readily compatible use between consoles and PCs. It's running 40mm drivers (not the Pro-G drivers on the G633/G933) for the ears, a 4mm driver for the mic, and has a frequency response of 20Hz-20KHz and 50Hz-20KHz, respectively.

Output driver sensitivity is rated at 90dB SPL/mW with impedance at ~32Ohms.

Get a visual on the new peripherals in our above video, or hang around and wait for some of the forthcoming reviews. We likely won't review all of these products, but do have plans for the keyboard and at least one other device.

We were on the way out the door for PAX as these peripherals came in. More info to come following the show.