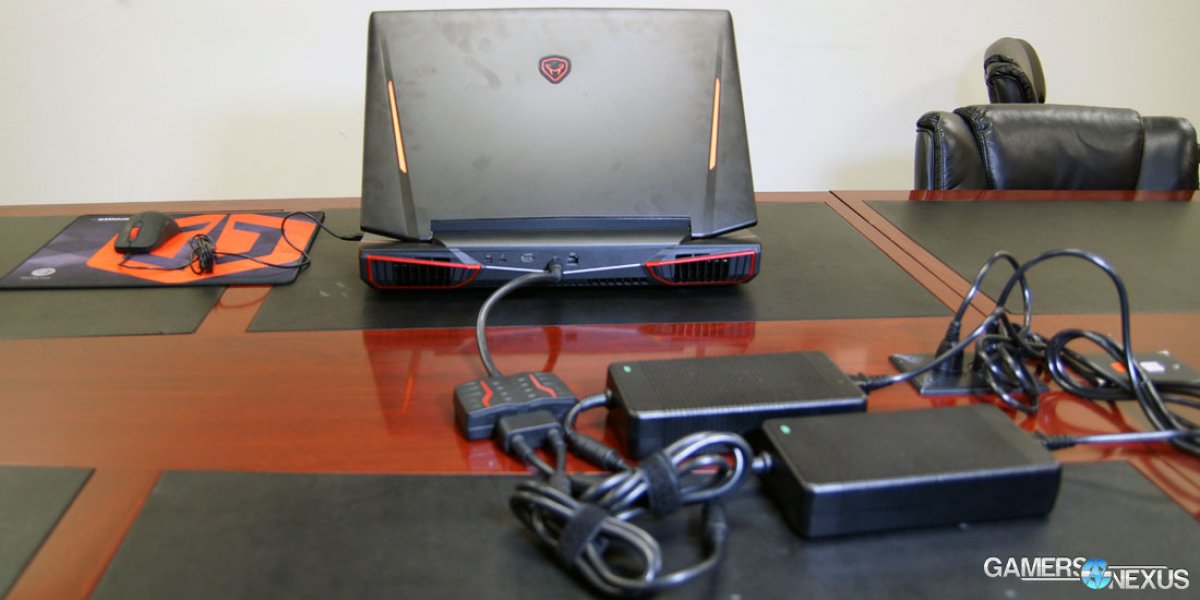 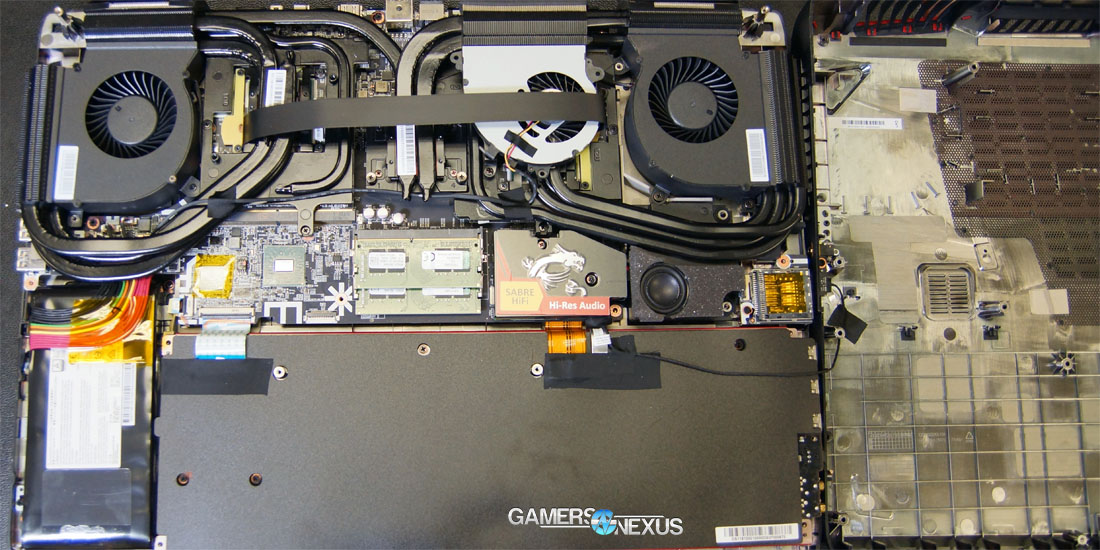 Visiting CyberPower while in Southern California allowed us to take apart the CyberPower Fangbook IV Extreme, an MSI GT83 laptop sold without the bloatware. This particular model has two GTX 1080 GPUs, each flanking the K-SKU Intel CPU centrally. 15 total heatpipes are routed between the heatsinks, some 8~10mm in size (we did not have calipers with us), which are backed-up by a three-fan cooling solution. Under 100% gaming or production workloads, those fans run fairly loud, but that's the nature of a laptop chassis attempting to cool 700W of hardware.

But that's not really what we're here to talk about – we might look at the thermals in a separate review. Today, we're looking at the power adapter configuration of the CyberPower Fangbook IV Extreme, aka MSI GT83VR Titan. If the photos haven't given it away, the laptop uses two power adapters to fuel the unit, each connecting at a hub that splits into a single power header for the unit. On the GTX 1080 SLI models, these AC bricks are rated at 330W each, with GTX 1070 SLI models running 2x 230W power adapters.

The obvious question: “Why two?”

And further, “why two that merge into one header?” 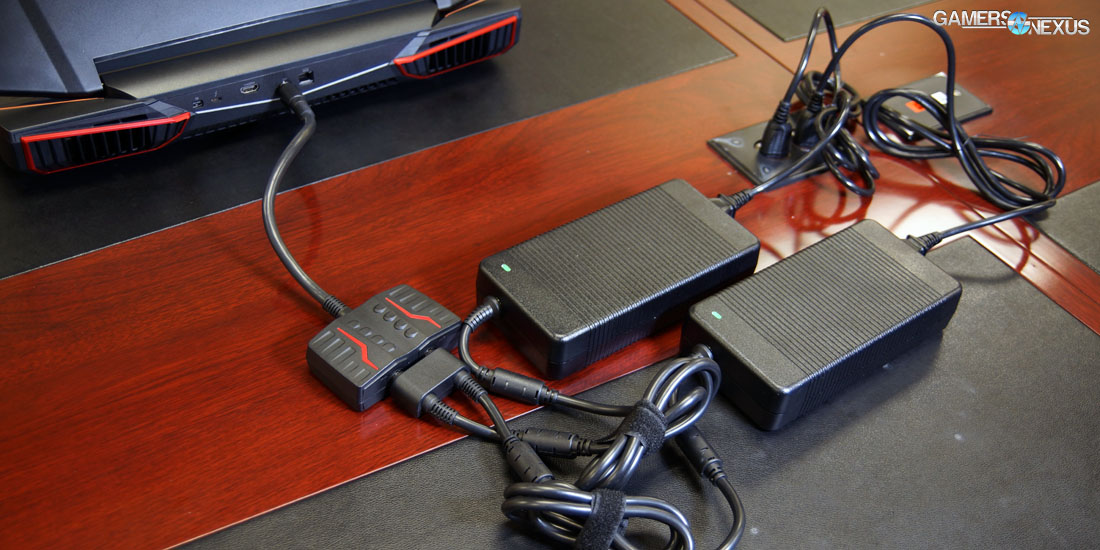 There are two different parts to this story, from what both CyberPower and MSI tell us. The easier, more common side is that no supply exists for laptop PSUs greater than 330W. MSI tells us that they tried to find 600W+ power bricks, but no supplier makes them. We then asked what the reasoning was for combining the two power sources into a single connector, since that certainly adds cost over plugging both into the laptop. MSI made this decision in hopes to eventually switch over to a single AC drop, as suppliers ramp-up operation or as TDP changes in future models with the same chassis. In either instance, MSI could ditch the included adapter / power merger and revert to a single-plug power source for the same GT83VR body.

CyberPower's explanation also made sense, and was one we hadn't thought of: The lack of AC adapters exceeding 330W in supply is partly resultant of standards and safety ratings, which exit “consumer” and enter “industrial” beyond that point. Industrial power supply standards aren't meant for consumer usage, making power drops unrealistic in higher capacities for these laptops. We were told that 330W is about the limit of what is possible to supply a laptop through an AC adapter.

There's another point worth bringing up, too: Power limit on the GPUs. 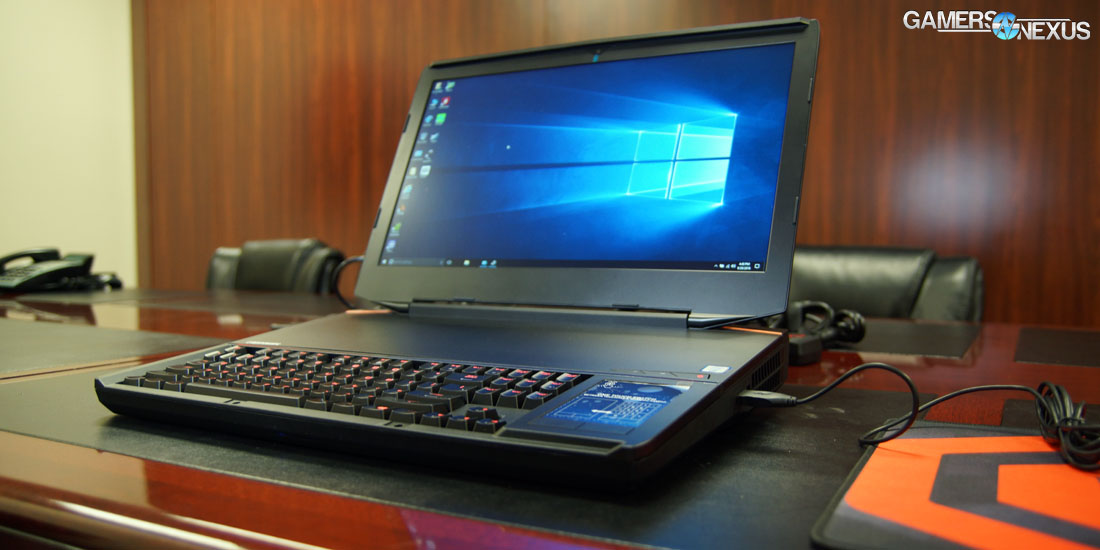 With the previous SLI model of this laptop, MSI was able to run a single power adapter for a similarly high TDP. The way MSI did this in the past was to actively draw power from the battery at the same time as from the wall, resulting in enough power to sustain a net-0 charge (or very slow charge, at best), a single power drop, and nearly full GPU performance. But not quite full – the GPU still hit a power limit of about 93-95%. That power limit was necessary to ensure there wasn't over-draw on the battery, which would have resulted in a net-negative power consumption during load, ultimately draining the battery and required a power limit reduction. The company received enough complaints from users that it decided to remedy this issue on the GT83VR 10-series laptops, and was forced to do so with the above-explained dual-adapter solution.

Now, with two power bricks, MSI (and CyberPower, by extension) is capable of running 100% power to the GPUs and avoid using the battery in that period. The obvious trade-off is two heavy bricks, but so it goes.

These laptops cost upwards of $4,000 and are massive. It's not exactly a “core audience” type of machine, but we wanted to talk about why the decision was made to architect the power design this way. Worth learning about for the future, just because it was a curiosity. Learn about the $5000 model here.