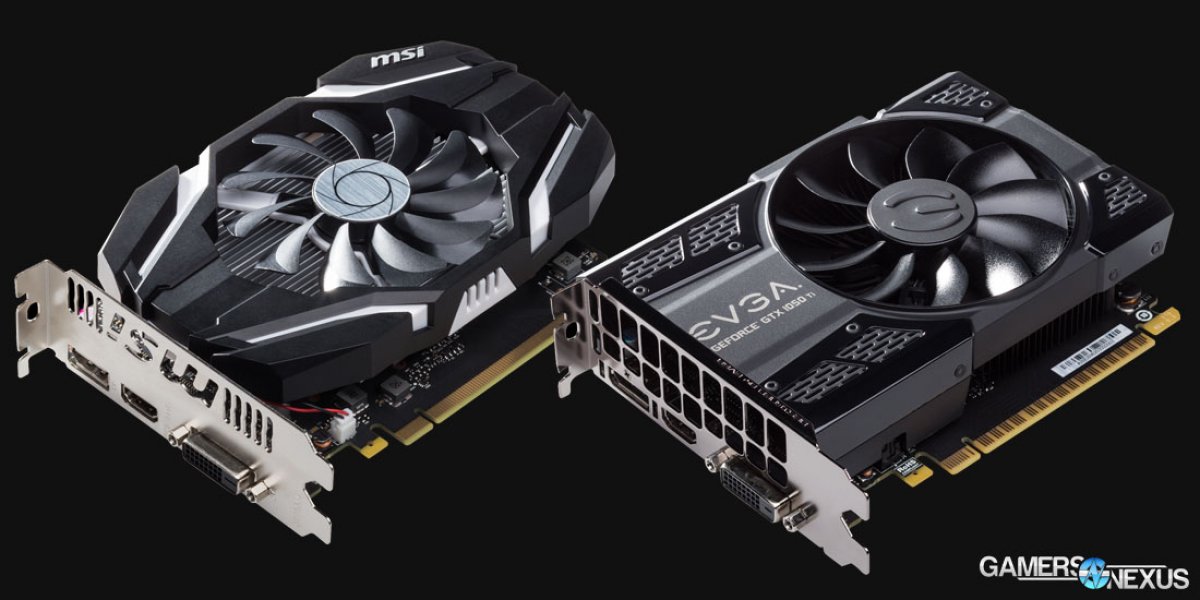 Tuesday, upon its institution on the Gregorian calendar, was deemed “product release day” by our long dead-and-rotted ancestors. Today marks the official announcement of the nVidia GTX 1050 and GTX 1050 Ti cards on the GP107 GPU, though additional product announcements will go live on our site by 10AM EST.

The GTX 1050 and 1050 Ti video cards are based on the GP107 GPU with Pascal architecture, sticking to the same SM layout as on previous Pascal GPUs (exception: GP100). Because this is a news announcement, we won't have products in hand for at least another day – but we can fly through the hard specs today and then advise that you return this week for our reviews.

Note also that the GTX 1050 Ti and 1050 are on 14nm fabrication process, which is part of nVidia's already ongoing process switching based on supply availability.

NVidia's GTX 1050 Ti runs the usual 8x TMUs per SM, resulting in a 48 texture map unit count and 32 ROPs. The GTX 1060 isn't quite double, but stands close with its 80 TMUs (and 48 ROPs). This specification disparity will primarily contribute to better 1440p gaming performance on the GTX 1060, which we've already shown is a fully capable card for high/ultra gaming at 2560x1440.

The stock clock of the GTX 1050 Ti is listed as 1290MHz, or 1392MHz boosted. We were told by nVidia that AIB partner models can allegedly overclock upwards of 1900MHz with an additional power header – though that's something GN will independently validate.

Speaking of power headers, the 1050 Ti doesn't need one – TDP is rated for 75W, meaning minimal power required to cool the GP107 GPU. It is not until factoring in heavier overclocks or other ancillary features that additional power headers will become necessary, though using one anyway will lighten load on the PCIe bus. The most important takeaway here is that the 1050 Ti can be operated on PSUs nearing 300-400W, depending on other hardware in the system. The industry is finally moving away from big power supplies, and this will hopefully encourage PSU manufacturers to invest at the low end. Right now, the 300W PSU market is largely filled with garbage – but that is slowly changing.

Memory speed functions at a reduced 7Gbps for both the GTX 1050 and 1050 Ti, down from 8Gbps on the GTX 1060 6GB GPUs. This is coupled with a reduction in memory capacity, the GTX 1050 at 2GB and 1050 Ti at 4GB. It's worth pointing out that this will almost certainly confuse buyers, as the GTX 1060 3GB card runs more SMs, cores, and an overall more powerful GPU than the GTX 1050 Ti, but has 3GB VRAM (or 1GB less than the 1050 Ti). We know that most of our readers understand that VRAM is not a direct measurement of performance, and that the SM resource availability is more important, but not all buyers will get that. This feeds into our argument that nVidia should have named the GTX 1060 3GB something different.

The memory subsystem for each card includes reliance on a 128-bit memory interface, totaling bandwidth of 112GB/s for each device.

In its press conference, nVidia made it a point to illustrate the nth-degree performance swing between using an IGP only (e.g. HD series Intel GPU) and adding a GTX 1050. We think this comparison is vacuous, seeing as no one is realistically going to be considering playing GTA V and the Witcher 3 on an i5 IGP. Take a look at that footnote: averaged performance of Fallout 4, GTA V, and The Witcher 3 (some of the most intensive titles out) as amalgamated with Overwatch, Battlefront, and Tomb Raider, and with “1080p/medium” settings across the board. The FPS disparity there is tremendous. Overwatch alone would throw the average.

We think this comparison is misguided. This is not revolutionary, nor is it news. Adding a dGPU improves performance. Everyone knows that.

The more useful set of data is below:

This initial GTX 1050, provided by nVidia (press cards haven't arrived yet), highlights that the GTX 1050 should sustain ~60FPS AVG in GTA V with medium settings and Overwatch with High settings. We'll also look into frametime performance once our models arrive. These numbers provide some minimal expectation as to performance, though, and something against which we can write our review later th is week.

We have cards en route. Check back this week for reviews. To our knowledge, no reviewers received cards from nVidia in time for day-one publication. Cards are being distributed through board partners for this round.