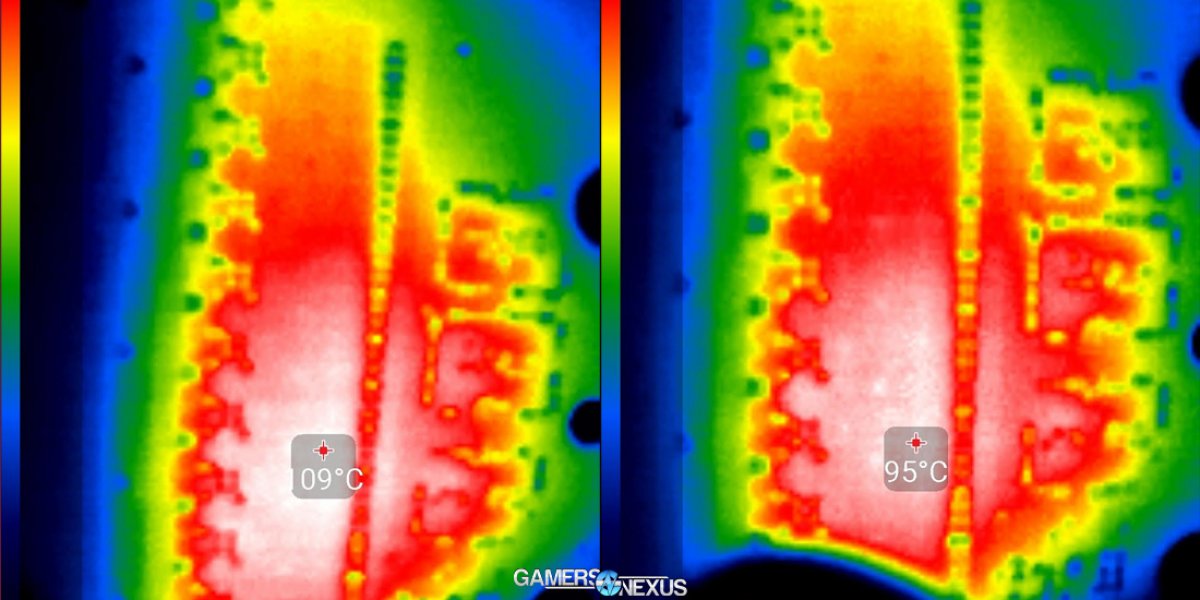 We received a shipment of EVGA GTX 1080 FTW cards today and immediately deployed them in our test bench. The cards have undergone about 8 hours of burn-in on the 1080 FTW without thermal pads so far, though we've also got the 1080 FTW with thermal pads for additional testing. In the process of testing this hardware, GamersNexus received a call from EVGA with pertinent updates to the company's VRM temperature solution: The company will now be addressing its VRM heat issues with a BIOS update in addition to the optional thermal pads replacement. We have briefly tested each solution. Our finalized testing will be online within a few days, once we've had more time to burn-in the cards, but we've got initial thermographic imaging and decibel level tests for now.

EVGA's BIOS update will, as we understand it, only modify the fan speed curve so that it is more aggressive. There should not be additional changes to the BIOS beyond this, it seems. Presently, the GTX 1080 FTW tends to max its fans at around ~1600RPM when under load (maxes at around ~1700RPM). This results in a completely acceptable GPU diode reading of roughly 72C (or ~50C delta T over ambient), but doesn't allow for VRM cooling given the lack of thermal interface between the PCB back-side and the backplate. The new fan speed will curve to hit 2200RPM, or a jump to ~80% in Afterburner/Precision from the original ~60% (max ~65%). We've performed initial dB testing to look at the change in noise output versus the fan RPM. Our thermal images also look at the EVGA GTX 1080 FTW with its backplate removed (a stock model) at the original fan RPM and our manually imposed 2200RPM fan speed.

Note that we are finalizing complete methodology and a report for publication shortly. This content will not be quite as in-depth as the final testing suite, but we hope that it is enough to at least explain the new updates EVGA's pushing (as of today), and hopefully show the change that users can expect.

We used FurMark's stress test on the GTX 1080 FTW to roughly simulate the original report by Tom's Hardware DE, which places more load on the VRM than might be found with real-world gaming use cases. Still, the point was to validate the initial testing. We'll set forth on additional testing later. 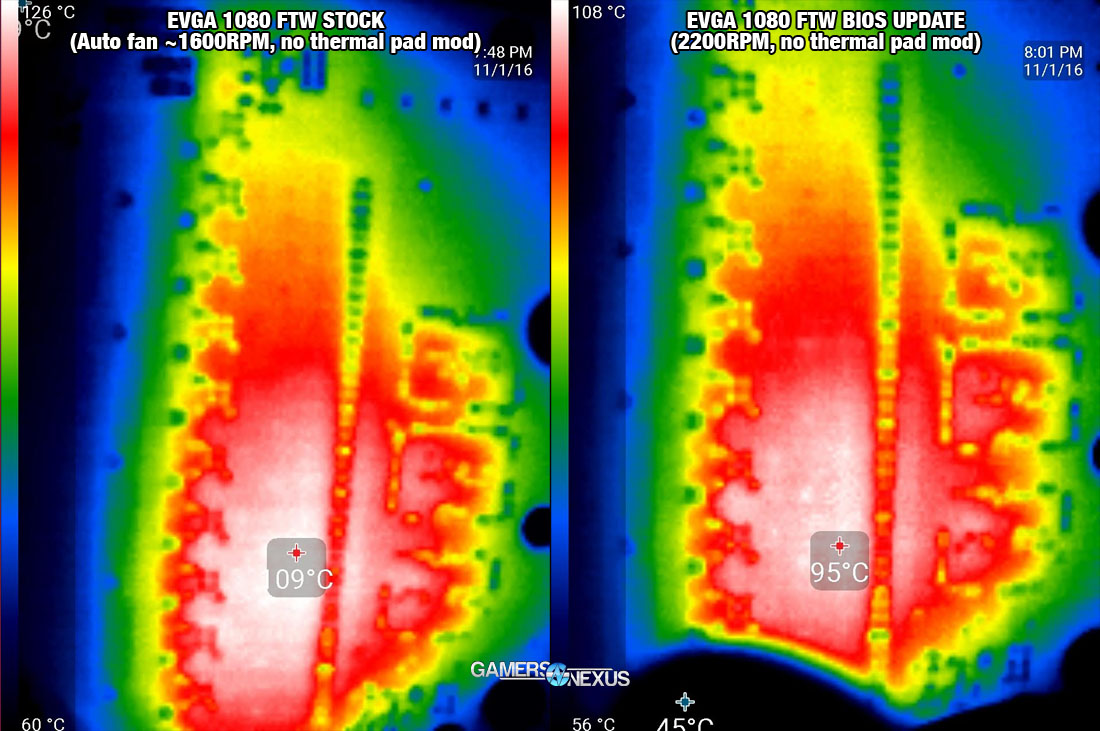 Here's two side-by-side thermal images of EVGA's 1080 FTW VRM (close-up) with max temperature indicators, as taken at an ambient of 22C. The left image is before EVGA's BIOS update, the right image is after the BIOS update (more aggressive fan RPM). Between the two, we're seeing a difference of ~14C, resultant of the jump from ~1600RPM to ~2200RPM. This brings the VRM temperature down to well within reasonable operating range. It's still warmer than some competition, but certainly not "overheating." The thermal pads will bring the ACX cooled GTX 1080 FTW cards down well under maximum safe specification once coupled with the vBIOS update.

Here's a look at the noise change:

The test platform used for this rapid-fire dB test included all passive cooling. The CPU cooling and PSU were passively cooled in the open-air test bench, with no case fans attached. The only device making noise was the video card. Noise floor of the room is ~26dB and has already been accounted for in these metrics. Test methodology is defined more heavily in our GPU reviews, though we'll outline it all in the next piece, too.

Noise is at ~38.6dB for the GTX 1080 FTW before the VBIOS mod (when the VRM was much hotter), with fan RPM auto-controlled to its peak of around ~1600RPM. The post-VBIOS change (simulated based on EVGA's direct advice to GN, by simply changing the fan RPM to 2200 manually) is at 47.1dB, or a perceived increase that is just shy of 2x to a listener. We'll talk more about noise levels and the perception of the increase shortly, once we've got more time to test the card within an enclosure.

GPU diode measurements will also be included in the next article. For now, here's another look at the card's performance with only the thermal pad modification (no fan speed increase): 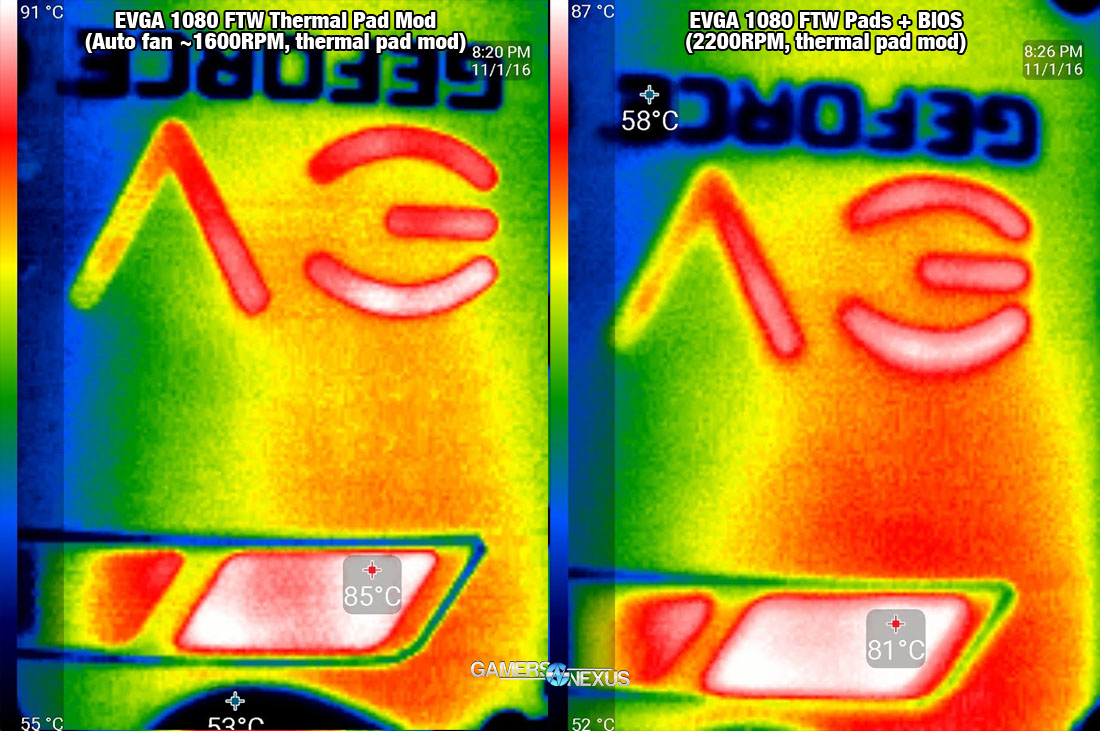 Just installing the thermal pads and leaving the fan / BIOS alone, temperature is close to ~85C when probed through the backplate. A direct thermocouple probe to the PCB shows us closer to ~90C, but this is still a significant reduction from the original stock model of the card. With both applied, we're nearing 80C on the back-side. Pretty damn good overall, actually, and becoming competitive with the Twin Frozr and other coolers. We'll show those soon.

EVGA's done well to remedy this issue thus far. Our next testing should hopefully determine whether or not the original card was ever at any risk of being damaged from its heat.

The new VBIOS should be available within a day or two through EVGA directly. The thermal pad mod is still available as an optional solution, though the aggressive fan curve does resolve the issues for the most part. If you wanted the quieter noise levels in addition to cooler performance, the thermal pad mod makes the most sense.

Note that our initial measurements are quick-and-dirty tests that were conducted as EVGA worked on its solution, which was communicated to GN as EVGA made progress. More definition will be published soon in both video and written form from GN.

For now, EVGA has provided the following FAQ for our publication:

Conclusion: EVGA offers full warranty support on its products, with cross-ship RMA*, and stands behind its products and commitment to our customers.

To resolve this, EVGA will be offering a VBIOS update, which adjusts the fan-speed curve to ensure sufficient cooling of all components across all operating temperatures. This VBIOS will be released in the next few days and users can download it and update their cards directly. This update resolves the potential thermal issues that have been reported, and ensures the card maintains safe operating temperatures.

For those users who want additional cooling beyond the VBIOS update, EVGA has optional thermal pads available. This update is not required, however; EVGA will make it available free of charge to any customer who is interested. To request the thermal pad kit, please visit www.evga.com/thermalmod

Any customer who is not comfortable performing the recommended VBIOS update, may request a warranty cross-shipment* to exchange the product to EVGA for an updated replacement.

All graphics cards shipped from EVGA after 11/1/2016 will have the VBIOS update applied.

Q. Which cards are supported by these updates?

Q. If my Graphics Card is not an ACX 3.0 design is it affected?

A. No, all other GPUs sold by EVGA including Founders Edition, Blower type, HYBRID, and HYDRO COPPER editions are unaffected.

Q. Does the VBIOS fix the temperature issues?

A. Yes, the VBIOS update will fix the temperature issues.

Q. Is my card damaged from running at a higher temperature?

A. No, but should any future warranty service be needed, EVGA stands behind its products.

Q. What happens if my card is accidentally damaged during the optional thermal pad installation?

A. EVGA will stand behind its customers with full warranty and cross-shipment.*

Q. What if I am not comfortable updating my VBIOS?

A. While EVGA has very user friendly ways to update VBIOS’s, if you still do not feel comfortable, we will support you with and advanced RMA and ship you a replacement card with the latest VBIOS.