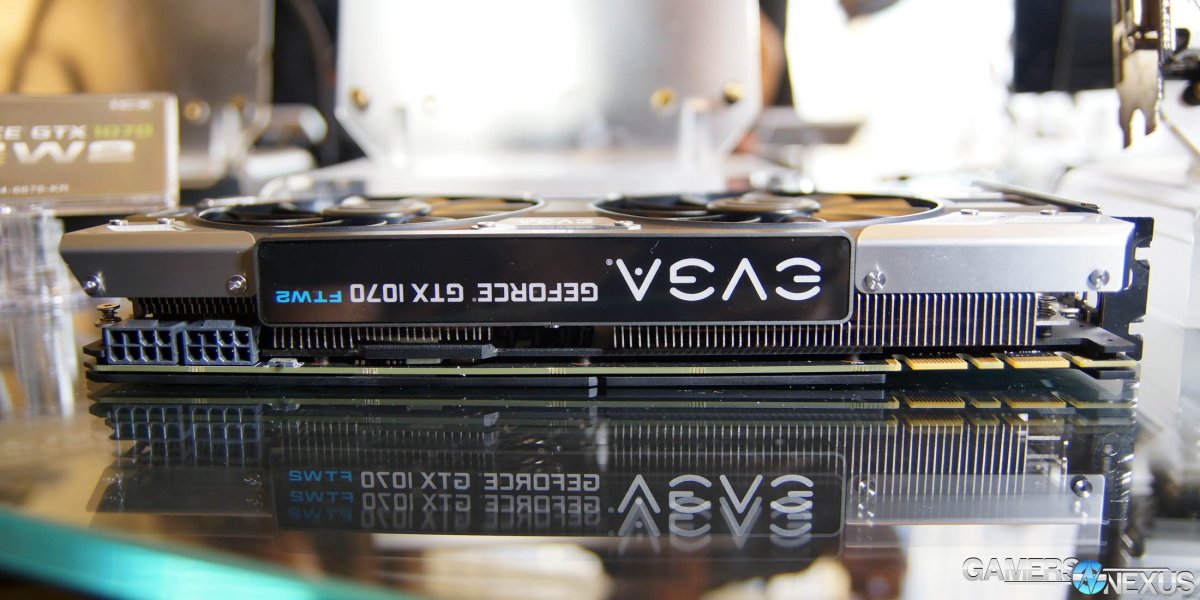 EVGA’s CES 2017 suite hosted a new set of 10-series GPUs with “ICX” coolers, an effort to rebuff the cooling capabilities of EVGA’s troubled ACX series. The ACX and ICX coolers will coexist (for now, at least), with each SKU taking slightly different price positioning in the market. Although EVGA wouldn’t give us any useful details about the specifications of the ICX cooler, we were able to figure most of it out through observation of the physical product.

For the most part, the ICX cooler has the same ID – the front of the card is nigh-identical to the front of the ACX cards, the LED placement and functionality is the same, the form factor is effectively the same. That’s not special. What’s changed is the cooling mechanisms. Major changes include EVGA’s fundamentally revamped focus of what devices are being cooled on the board. As we’ve demonstrated time and again, the GPU should no longer be the focal point of cooling solutions. Today, with Pascal’s reduced operating voltage (and therefore, temperature), VRMs and VRAM are running at more significant temperatures. Most of the last-gen of GPU cooling solutions don’t put much focus on non-GPU device cooling, and the GPU cores are now efficient enough to demand cooling efforts be diverted to FETs, capacitor banks, and potentially VRAM (though that is less important).

From observation, we determined that EVGA’s ICX solution has aluminum (or nickel-plated copper) heatsinks protruding from the surface of the base plate, used to sink heat from the VRAM modules. VRAM isn’t the hottest component in the system, but this step will be more effective than just a thermal pad – a lot more effective, as the thermal conductivity of aluminum is around 200W/mK. Most GPU thermal pads are below 6W/mK, with several of EVGA’s ACX thermal pad mod kits landing closer to 1W/mK. 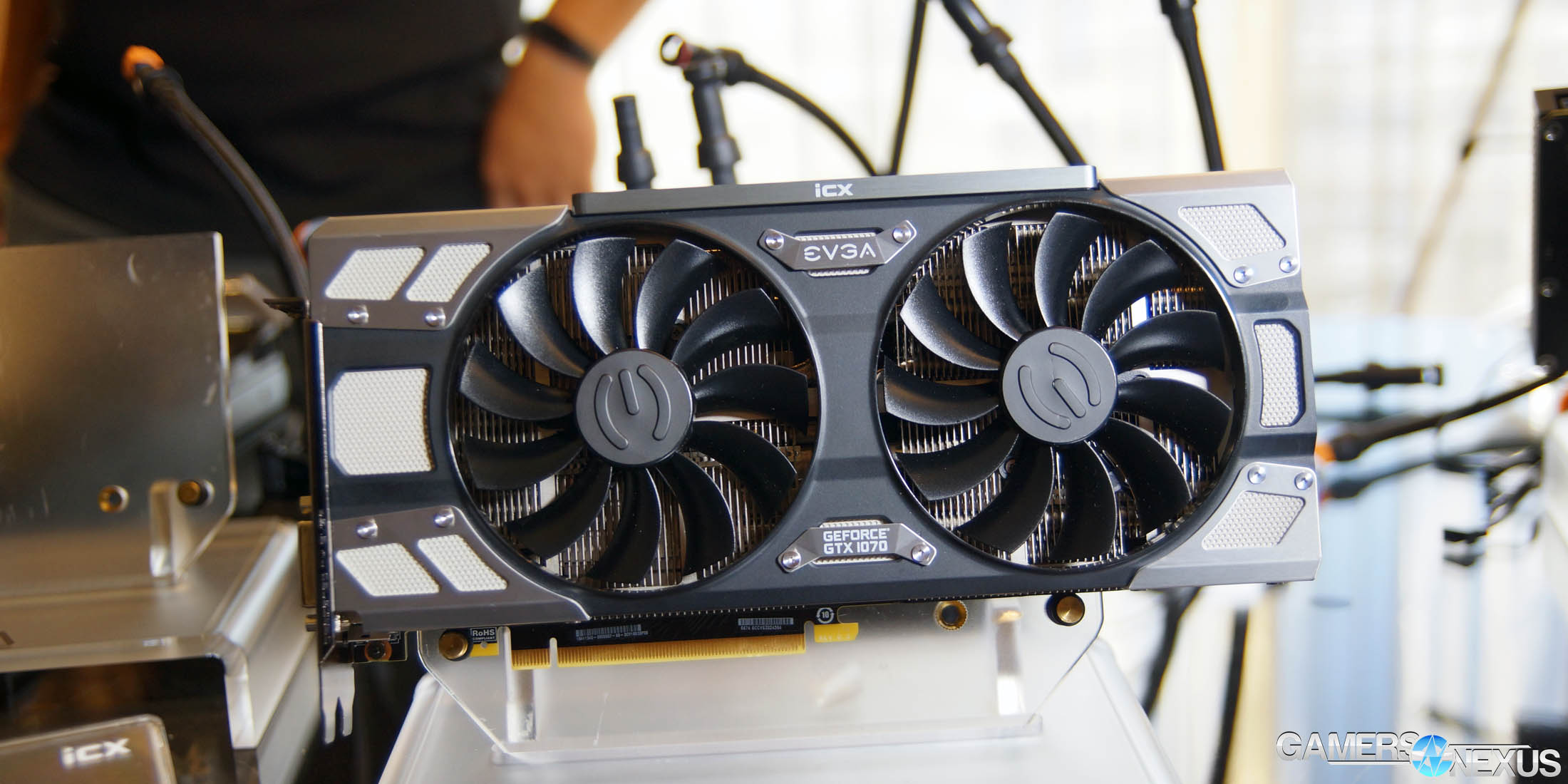 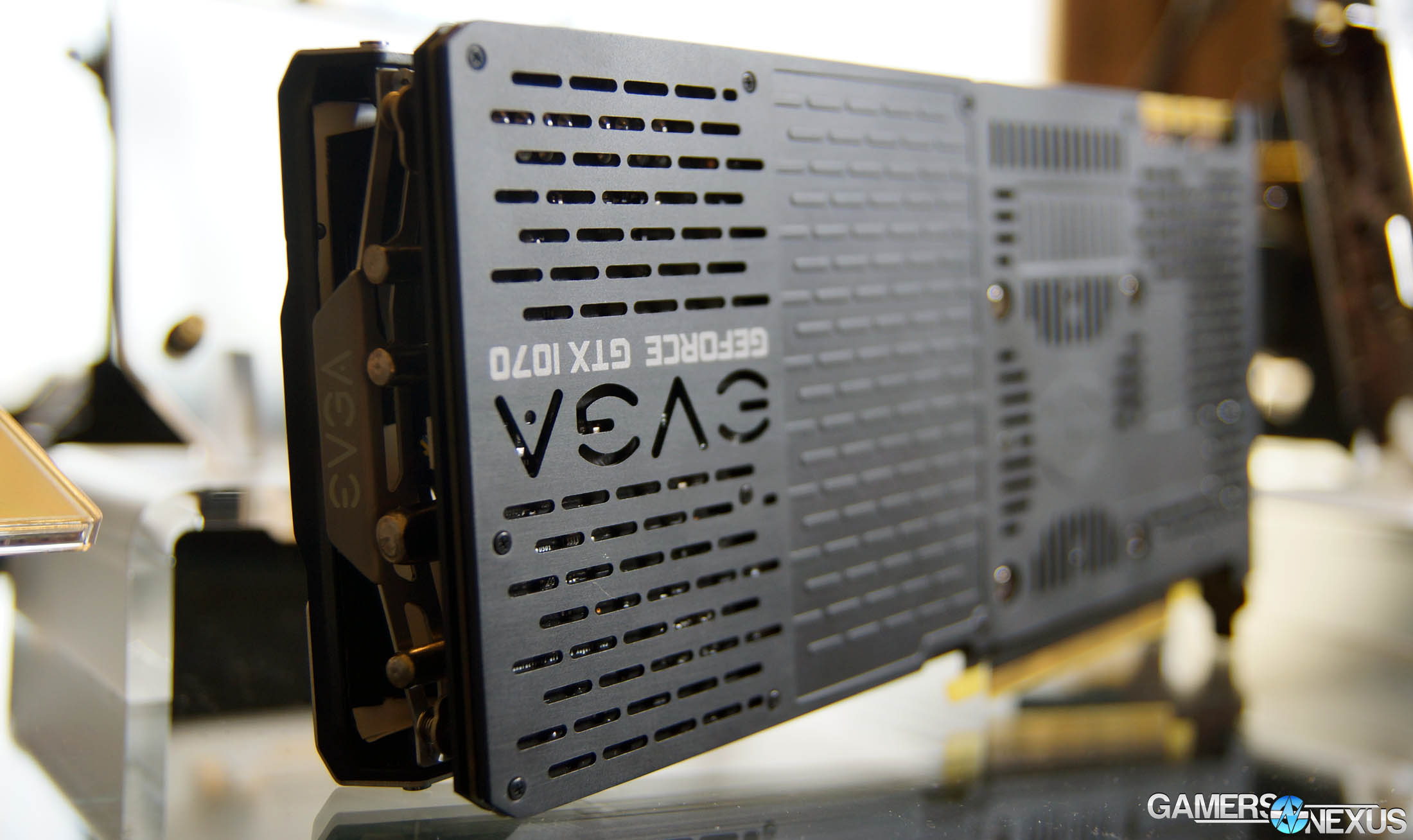 There are thermal pads on all sides of the PCB, including the front-side VRM components (FETs and capacitor bank are both directly contacting the baseplate) and the back-side components. The backplate has direct contact to the PCB. The backplate split into two halves, an artifact of the die casting process, and is heavily ventilated near the hotspots we’ve previously measured in our EVGA temperature analysis series.

A number of smaller changes also riddle the new ICX GTX 1070 and GTX 1080 GPUs; for one, EVGA’s increased the surface area of the baseplate, which will increase the heat spreading capabilities and total dissipation potential. This isn’t marketing speak, it’s the basic science of cooling devices. More surface area means more ability to disperse that heat, and with the right airflow, the warmed surfaces should have their siphoned heat whisked away. 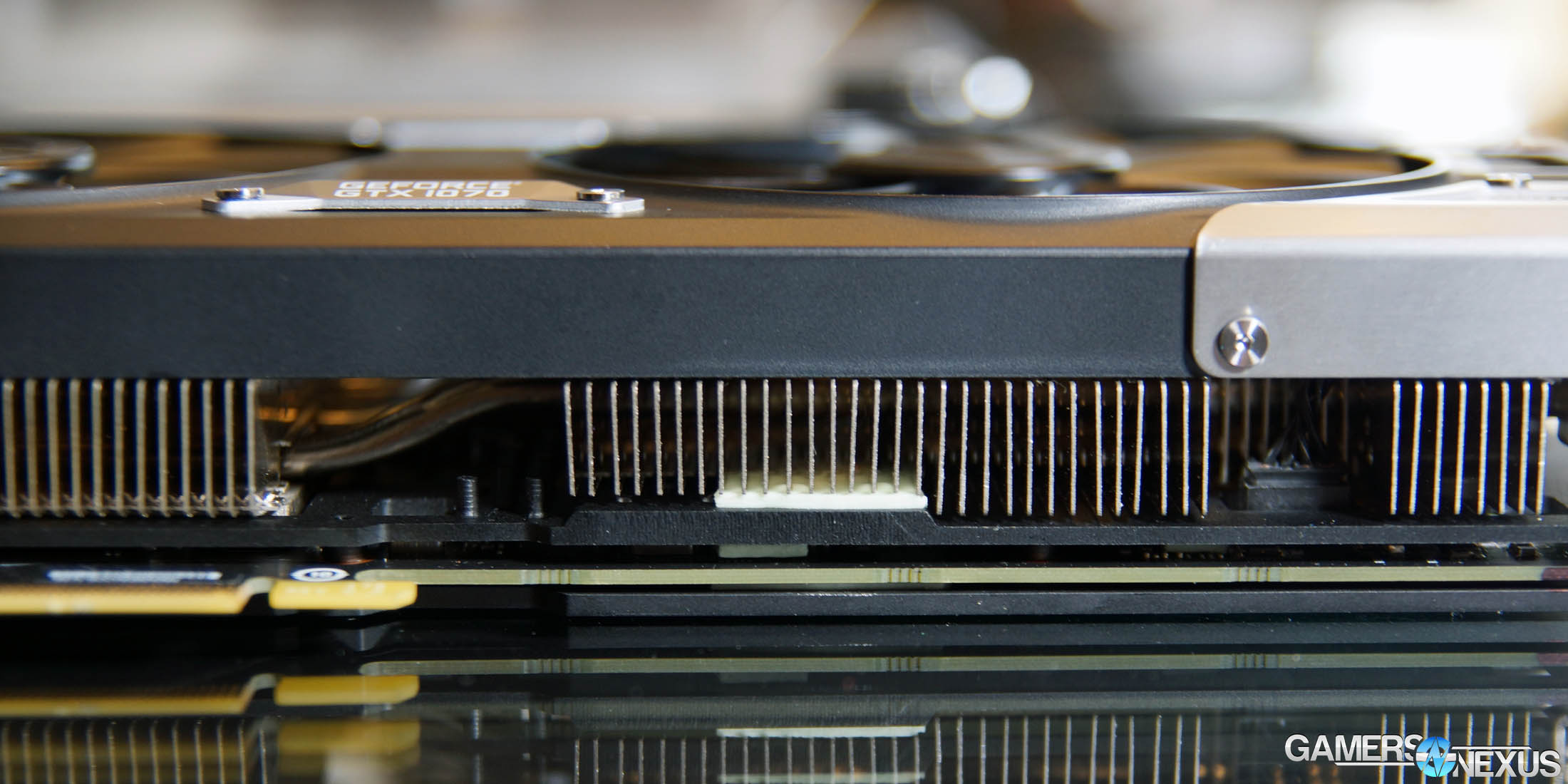 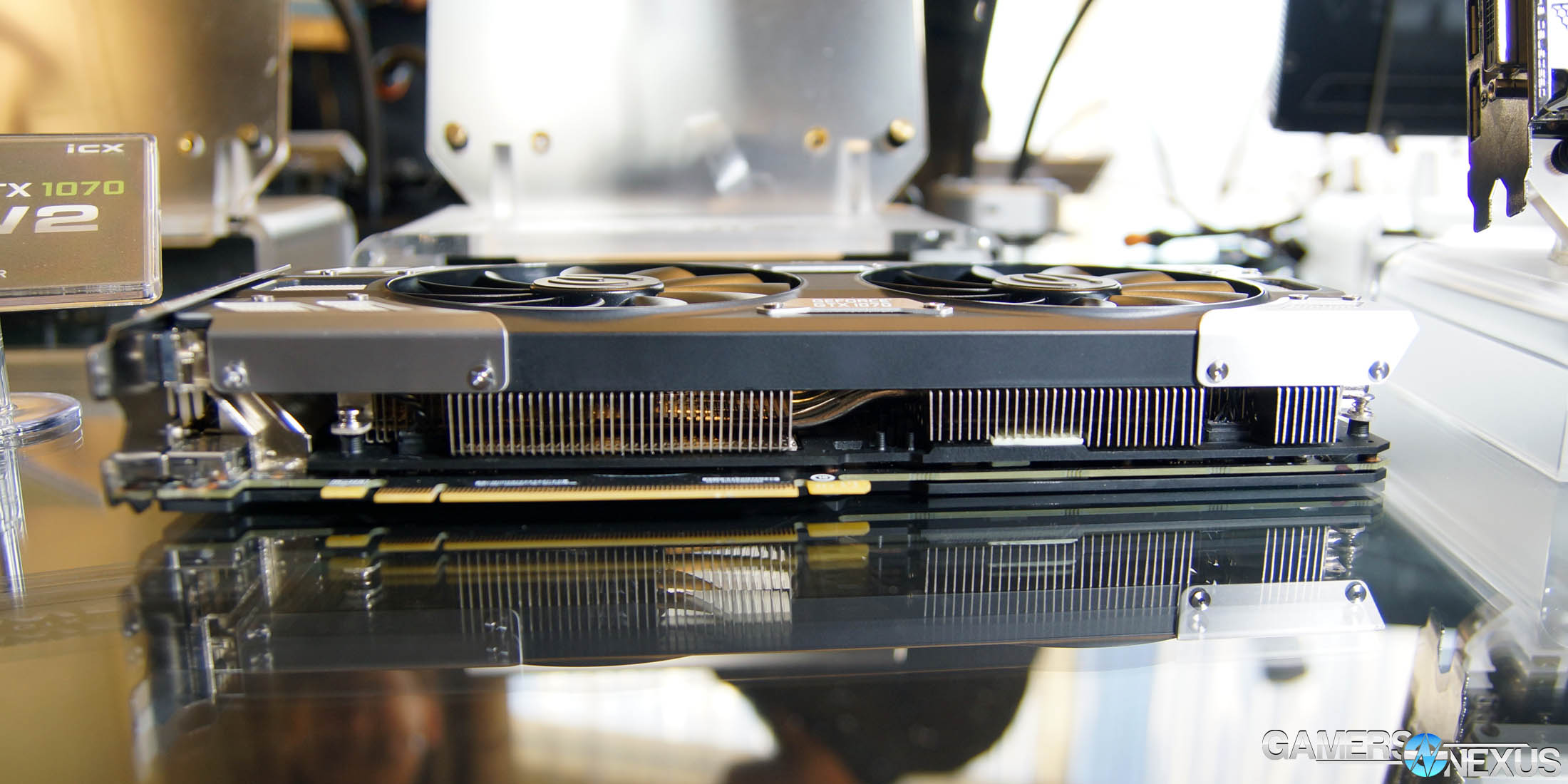 What might be marketing speak, of course, is the efficacy of that change – we may be talking something like a 1C swing from the extra “nubs” (loosely packed aluminum cylindrical fins across the center and bottom-left of the plate). And that’s an “if that” statement – it could be less. We have a way to test this in our lab, though, and will do so once received.

With thermals, where vendors often fight over a degree or two of difference, it is the small changes that should stack up. The big question is whether these small changes, which could increase manufacturing cost, are actually valuable. Given that these parts are either molded or die cast, cost shouldn’t be too big of a spike to add those types of fins on the baseplate. It’s just that initial dev cost that’s being paid for by someone. 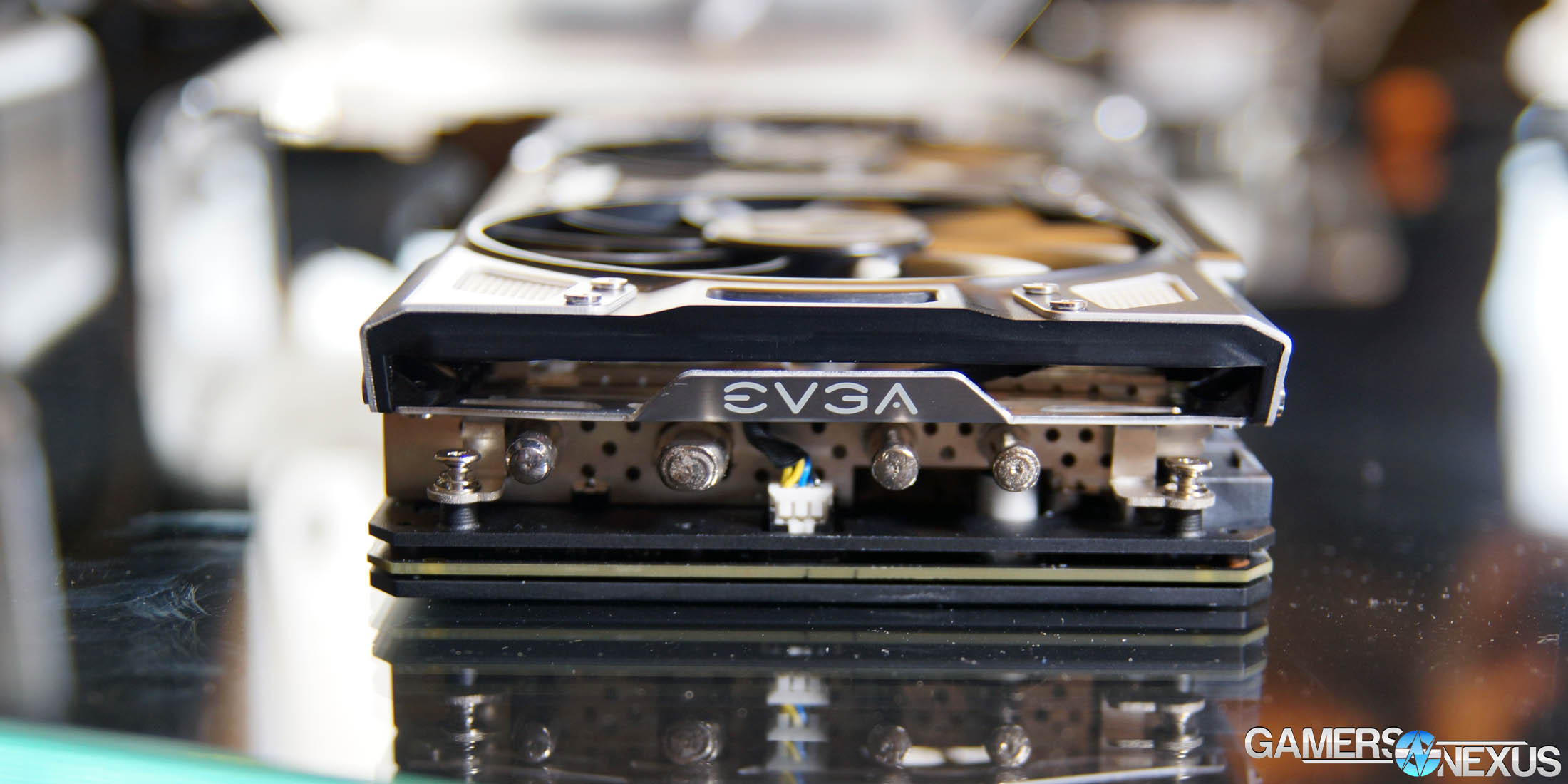 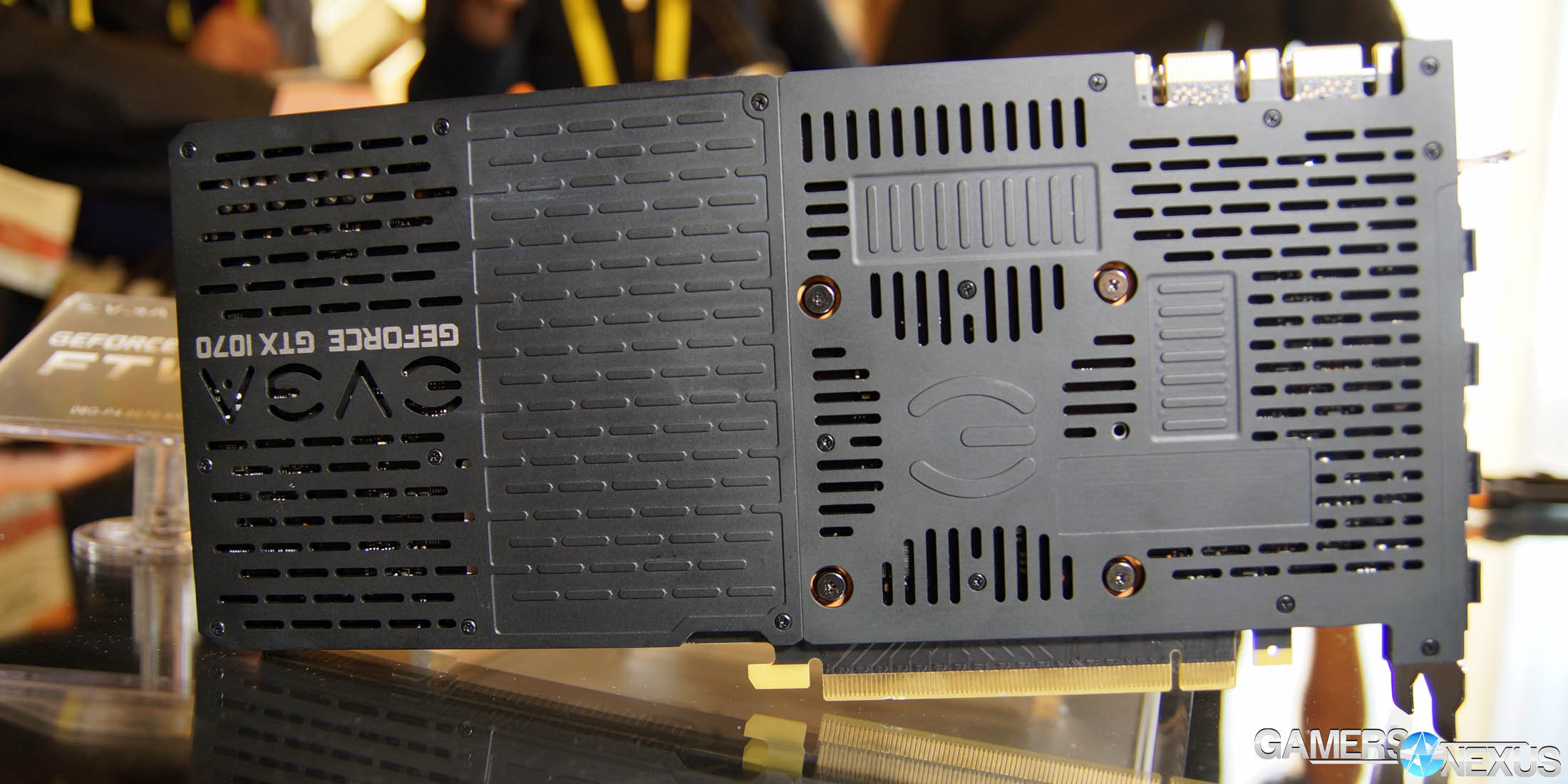 Heatpipe layout looks to be a 6-pipe design, with five cooling the entirety of the underlying fin stack and one cooling closer to the GPU (not visible). The fans are the same fans used in the ACX 3.0 coolers, with no change at all.

We’re expecting samples in the end of January, and will update with thermal benchmarks (including direct-probe measurements of the VRM components) at the time of receipt. The PCB for the new FTW2 & SC2 cards is new to this series, but we don’t yet have details on the VRM or layout. 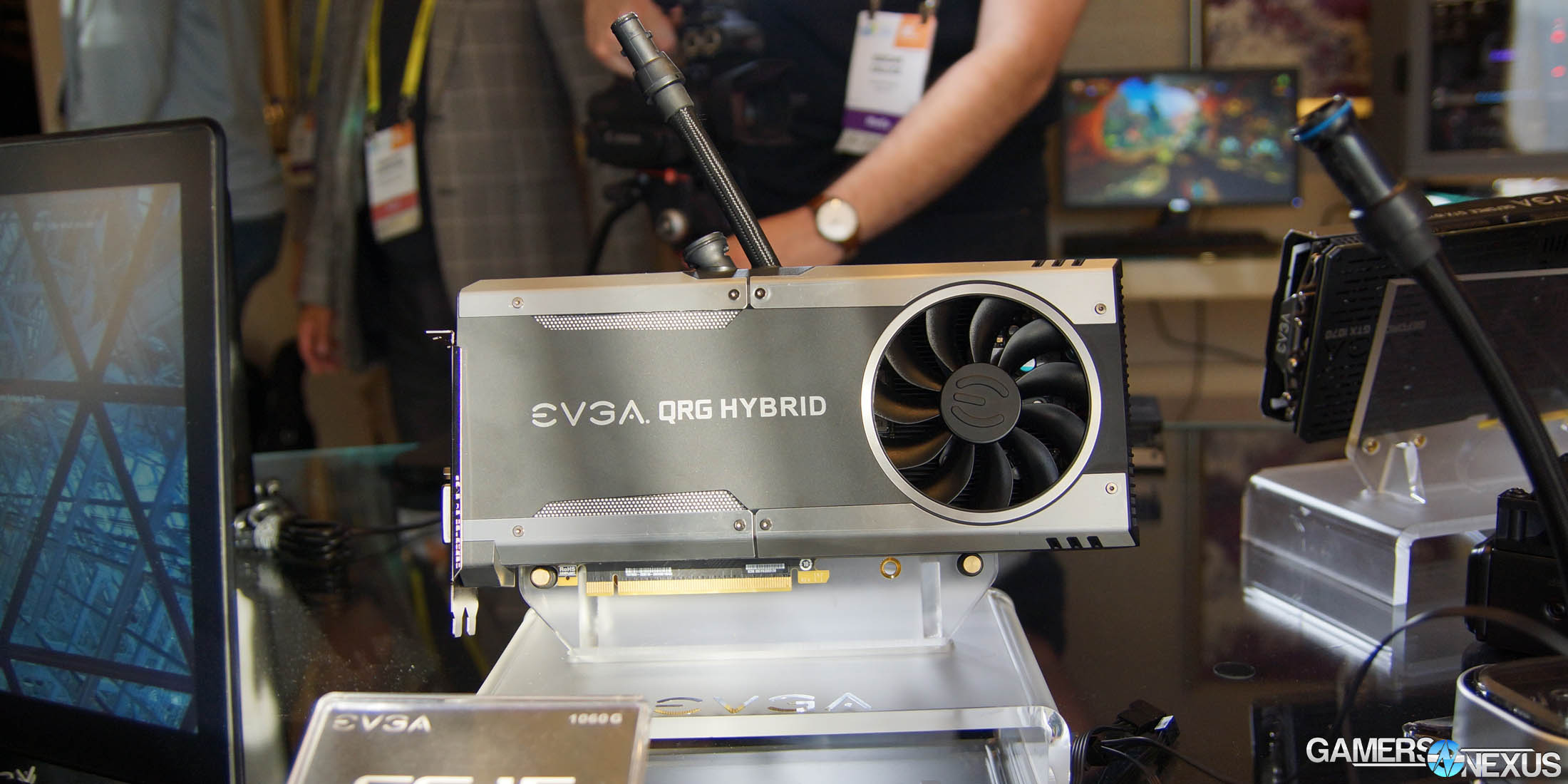 Just briefly before getting to the CLC: EVGA’s got a new rendition of the Hybrid GTX 1080 GPU.

That’s the actual name of EVGA’s new CPU cooler, by the way: “Closed-loop liquid cooler” for CPUs. It’s a CLC, and so they’ve named it “CLC.” Perhaps EVGA’s next new video card will be “video card.”

The cooler uses a Gen5 Asetek pump, as the Kraken X42/X52/X62 series does, and is built on the same internal architecture as we’ve previously demonstrated (tear-down here). Note that NZXT has heavily customized their CPU cooler, including a completely new PCB for LED controls and fine-tuned PCB for the pump proper. EVGA hasn’t gone to this level of detail (which may help bring cost below NZXT), instead focusing on simpler things: Lower cost than competition for an RGB-illuminated pump plate, user-serviceable firmware for over-time roll-outs, and that’s about it. Looks, maybe. 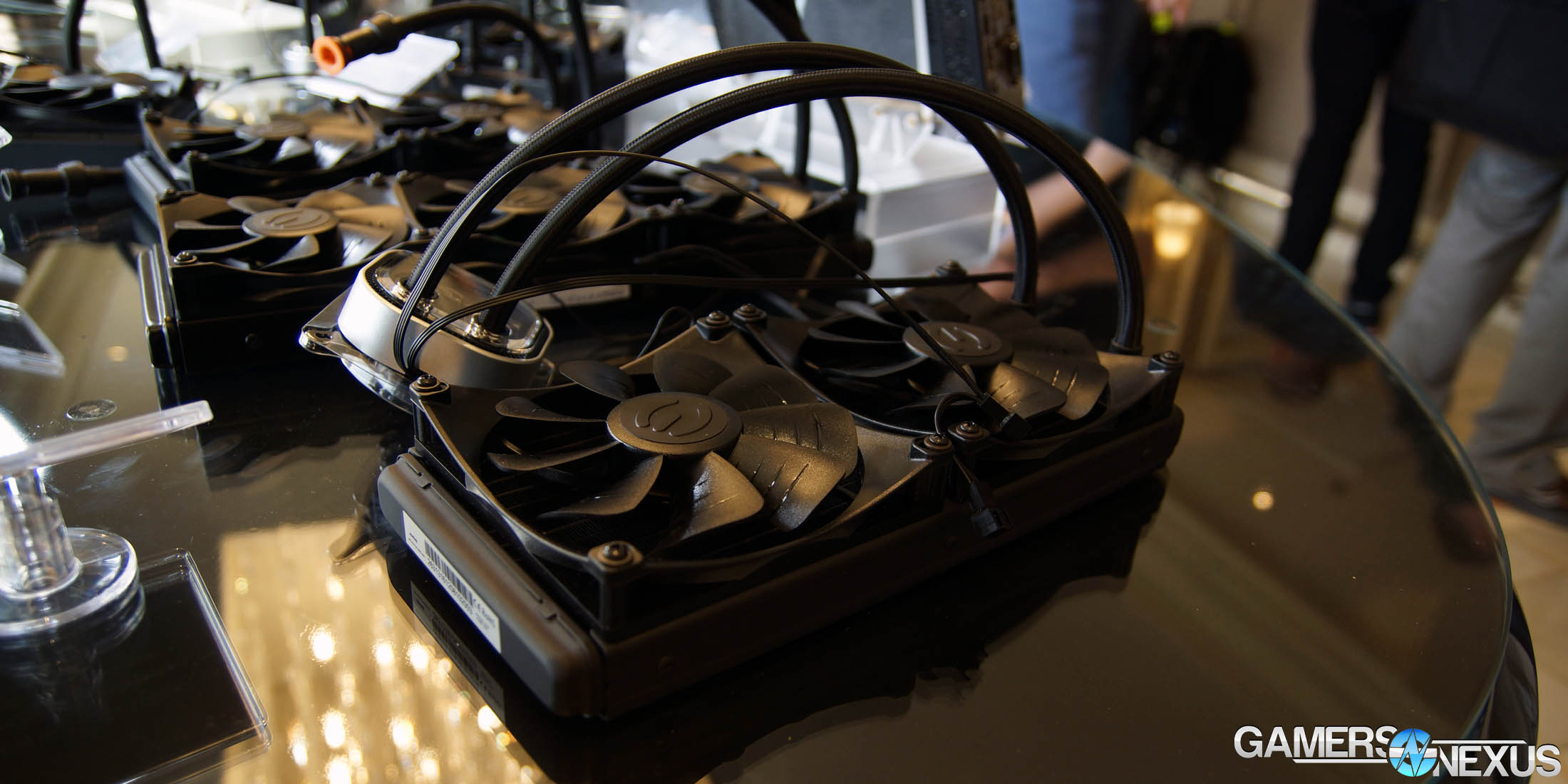 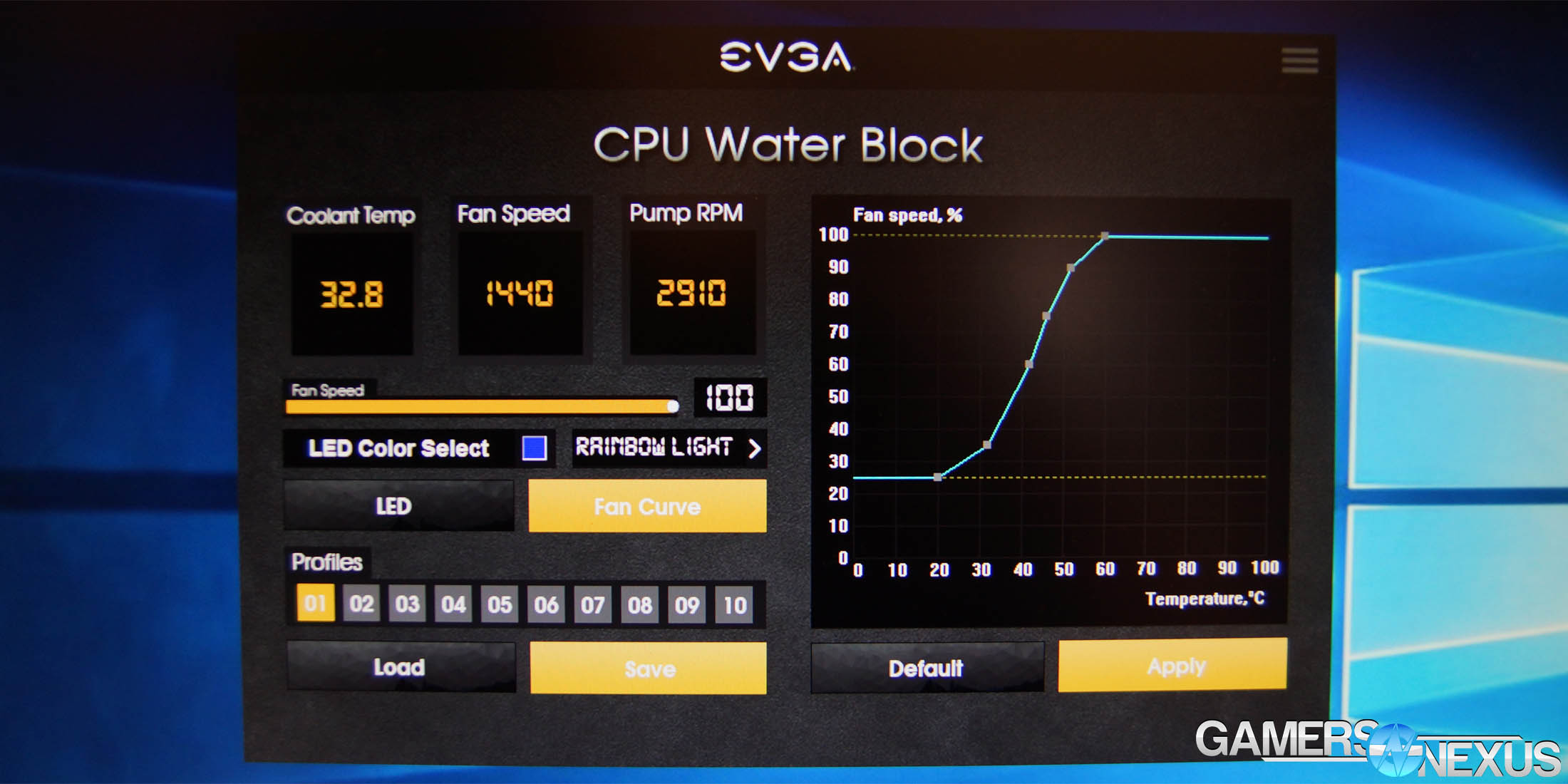 The pump operates at its unfettered RPM with no pump speed control provided to the user (which, honestly, is unnecessary). Two of the CPU closed-loop liquid cooler units will be available, assuming you can find them with the rather unsearchable name, and will be sized at 280mm and 120mm. The 120mm unit should be close to $90 MSRP, with the 280mm closer to ~$120-$140. The 280mm cooler will be in fairly direct competition with NZXT’s Kraken X62, and would do wise to steer clear of anything too close in price bracket.

Our current understanding is that EVGA’s thermocouple placement is the same as NZXT’s, with the thermocouple coated in thermal compound and placed dead center of the liquid stream inside the pump. When we looked at software, EVGA told us that the fan speed is controlled on the basis of coolant temperature – a bad idea, we think, given the delta between the liquid temperature and the 7700K (29C to 70C at best, or 29C to 94C at worst, in our testing). Thermal transfer between the die and IHS isn’t great with Kaby Lake (see page 2 of our review), and so the delta between coolant and CPU PKG means the cooler will always assume a safe temperature (29C – which is just 5C higher than the baseline coolant temp). With that assumption, the fans would probably operate at their slowest RPM – whatever that may be – while the CPU incinerates itself at 90C (or higher).

EVGA’s also got the new case – the DG-7 – but that’s a simple mid-tower and will be explored more later.