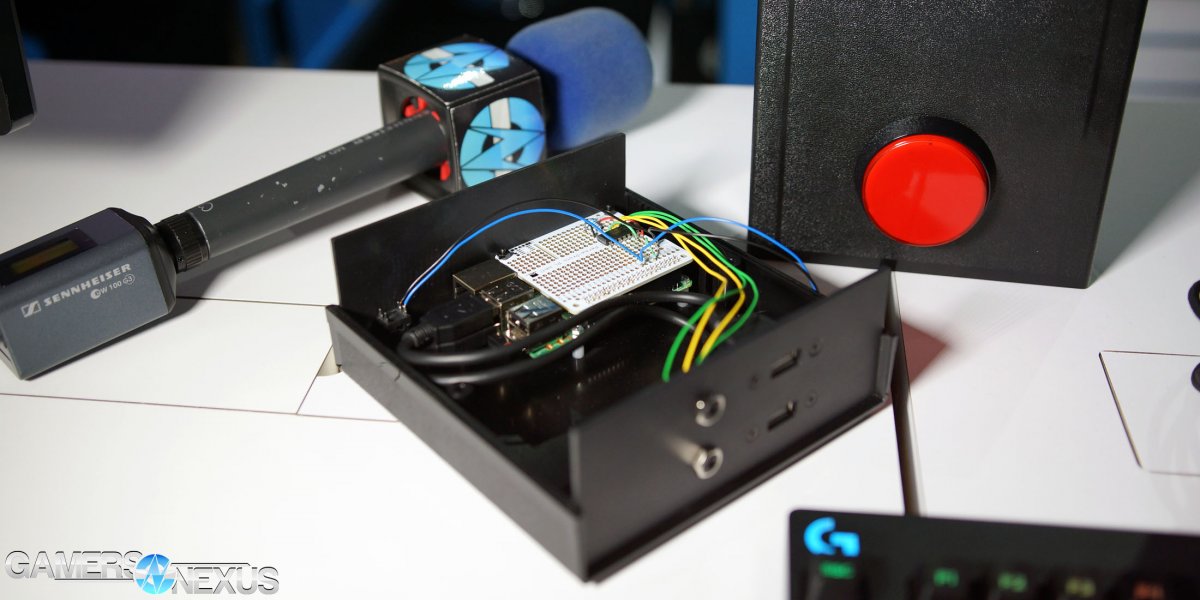 Testing is fairly straight-forward: Push a giant red button, then refer to the delta ms output on the screen. For most tests, we saw in the range of 7-11ms faster response on the Logitech G keyboard. Although no absolute value was provided for ms response time, we can see the deltas by establishing what are effectively “key frames” in the Raspberry Pi. Button press sets a time marker, feeds the user input into a timing circuit, then feeds that down two sets of wires simultaneously. That’s the important bit: The signal is simultaneously dispatched to each keyboard. At this stage, the wire feeds to the keyboards, then taps into the keyboard matrix and electrically fires an “L” key input. The keyboard does what keyboards do, and next outputs that input via USB to the Raspberry Pi box. At this point, the Pi can look at the timestamp for receipt and for dispatch of each set of signals, run a comparison, and provide a delta for who “won” the comparison.

But again, it’s less about “we’re better” and more about “we’re good.” Logitech G noted to us that it is combating perception issues with some of its audience who see Logitech office products (read: non-gaming) and apply that experience to Logitech G’s gaming products. The company, using its science-focused tech marketing, is attempting to establish that they build competitive peripherals for gaming.

It’s perhaps good timing to note that “Response Time” and “Response Rate” are not equal to one another. This is part of why Logitech is highlighting deltas rather than absolutes in its timing test, as the general perception of anything greater than a 1ms number (doesn’t matter what it represents) will seem slow. Poll rates on most gaming products are 1000Hz – or 1000 times per second reporting to the host – but response times are higher. Response time represents the time requirement (in ms) to capture, “package,” and send a signal. Poll rate, or report rate, is the frequency (interval) at which the hardware and host communicate with one another. That’s usually a 1ms interval, or a 1000Hz rate. Logitech’s demo simulates a press of the “L” key by bridging the contacts, at which point we begin measuring the time for that signal to send and hit the Pi. If you’re polling 1000 times per second, it doesn’t necessarily mean there are 1000 data points per second to capture and relay to the system. Missing a tick because of a longer response time is more the concern than the report rate itself.

We hope to look into this type of testing more in the future, as the Raspberry Pi 3 testing device is more affordable to replicate than Logitech’s previous mouse latency testing. In the meantime, it’s a clever way for tech marketing to deliver a message about their keyboard’s speed while simultaneously clarifying the differences between response time and report rate.

Check the video for a visual representation of what’s going on.