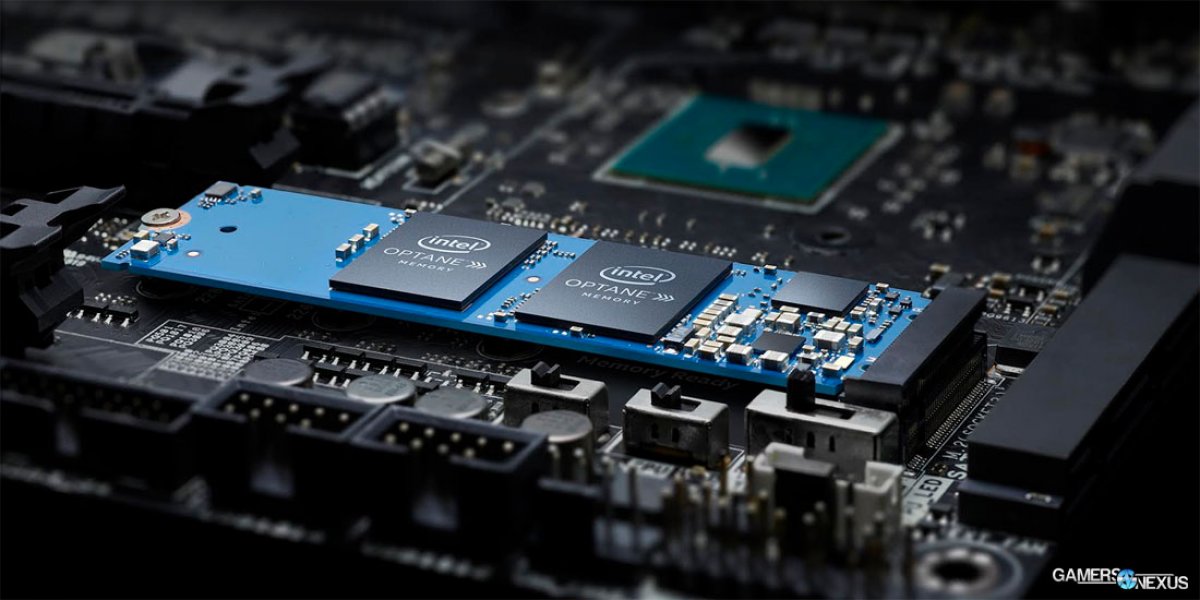 We recently covered Intel’s DC P4800X data center drive, with takes on the technology from two editors in video and article form. Those content pieces served as a technology overview for 3D Xpoint and Intel Optane (and should be referenced as primer material), but both indicated a distinct lack of any consumer-focused launch for the new half-memory, half-storage amalgam.

Today, we’re back to discuss Intel’s Optane Memory modules, which will ship April 24 in the form of M.2 sticks.

As Intel’s platform for 3D Xpoint (Micron also has one: QuantX), Optane will be deployed on standardized interfaces like PCI-e AICs, M.2, and eventually DIMM form factors. This means no special “Optane port,” so to speak, and should make adoption at least somewhat more likely. There’s still a challenging road ahead for Intel, of course, as Optane has big goals to somewhat unify memory and storage by creating a device with storage-like capacities and memory-like latencies. For more of a technology overview, check out Patrick Stone’s article on the DC P4800X.

The elevator pitch for Intel’s M.2 stick is that it’s ultimately something of a drive cache – yes, we’ve heard that story before – that sits in front of slower devices. In all of its press materials, Intel marketed the $44 stick as targeted at hard drive users, and didn’t present much data for comparison alongside SSDs. There were a few reasons for this that we’ll discuss as we go through this piece, not all of which GamersNexus agrees with.

Optane Memory can be configured through RST and sits as a 16GB or 32GB frontloader to primary storage. Intel claims that the memory modules can ‘learn’ user behavior to determine which files are most important for caching, though undoubtedly Windows file caching would yield the biggest performance improvements. Theoretically, this improves program launch times, file load times (think: Radeon SSG), and Windows boot times. We got to test some of this at Intel’s tech day, but won’t be publishing hard numbers until we can validate at GN HQ. For a brief example, we did see some program launch time reductions for things like Blender or photo editing tools (reduction from ~8.5s to ~4s in the best case for both the HDD and Optane+HDD configuration). This is promising in at least that one aspect, though we weren’t provided SSDs for similar comparison. We’d expect about the same performance swing. 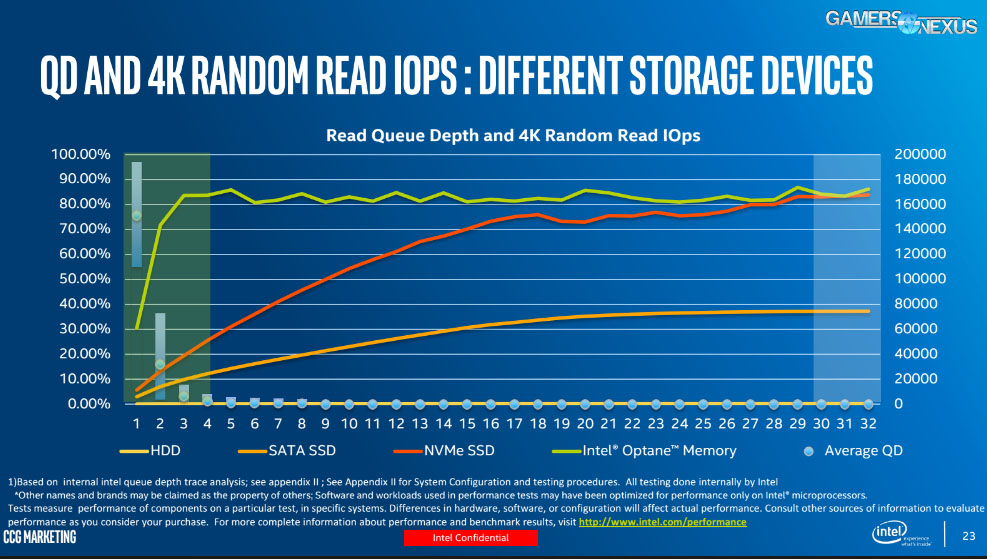 This is done by effectively caching commonly accessed files in Optane Memory which, despite being called “memory,” is a non-volatile storage solution. If GTA V or other titles are launched regularly, Optane should retain some of the files accessed at game launch to accelerate loads on subsequent launches. Files which are determined to be less frequently used get culled from Optane memory over time, allowing the most frequented to take their place.

Intel claims a “2x” increase in “responsiveness” of the system on the whole, claims “up to 67% faster” game launch times, and claims “up to 4.1x” faster large media project launches. We are not 100% positive of if these tests were conducted in realistic user scenarios, e.g. heavy use of a system where files may fall in and out of that memory cache, but this certainly provides a benchmark to validate marketing language. For the record, these are all comparisons with a 1TB HDD as the primary disk vs. 1TB HDD + 16GB Optane memory.

Of course, for our audience, we figure you’d probably have an SSD as a primary boot drive, and you’d likely load mission critical applications (Blender, Premiere, favorite game, browsers) to that SSD. In those cases, we’re not sure if you’ll see much of a difference using Optane memory. A proper SSD isn’t much more expensive than the $44 entry-level ask of Optane, either, and has greater capacity for an overall wider reach to accelerate software loading. Now, to Intel’s credit, you’re probably not storing many games or large media projects on a primary SSD, so Optane could come in handy as a means to lessen the storage demand on primary boot SSDs. Hard drives are still being used in tandem with SSDs given the ever-increasing size of games, and those hard drives are still the absolute slowest point in the entire system. That’s a problem, clearly, but not cheaply solved for comparable capacities. Hence the repeat attempts over the years to frontload slow, spinning media.

We brought up to Intel that it seems SSDs already serve as an answer to hard drives, and asked why this would be any different. One of Intel’s arguments was that consumers – not our audience, but folks who buy the cheapest PC off a shelf at Best Buy – have trouble understanding the difference between two different storage options in Windows. The consumer would just see one drive with this, we were told, but still experience greater responsiveness during Windows usage and thus lessen the number 1 complaint consumers have against Windows: that it’s “slow.”

This argument has mixed merits. Intel is correct: a lot of end users don’t understand what an SSD is, and the least technical of the crowd might not understand where to put their files. If that’s the case, that’s a messaging and communication challenge on the part of the SSD. Intel will face its own messaging and communication challenges with Optane, so this isn’t a perfect fix.

As for the other argument, that end users shoot themselves in the foot by buying systems with only a hard drive, we also foresee challenges there. If you’re buying the $500 box instead of the $600 box next to it purely based on price, and because it doesn’t “feel” different in the store, then Optane doesn’t fix that. The only difference is that we’re now looking at a $500 box versus a $550 box (markup notwithstanding), so folks who chose the cheapest will still choose the cheapest. That’s still a hard drive-only solution, because SIs fight tooth-and-nail to be the cheapest product on the shelf. Apple, granted, does not have this problem. Apple controls their entire ecosystem – problematic for a number of other reasons – and thus benefits from the ability to force SSDs into all their units as determined necessary. There’s no one to undercut that box with something cheaper vis-a-vis a hard drive, and so they look “fastest” to a lay-user. Without major MDF, Intel still faces the race-to-$0 challenge of Windows-based computers from SIs.

And again: There’s a lot of testing to do here. The use case, it seems, would not be to replace SSD+HDD builds – most of our audience. There are use cases, certainly, we’ll just have to figure them out and then determine if they genuinely require a new product. Optane and 3D Xpoint absolutely have merits in server, enterprise, and data center. Consumer is a challenge (given price restrictions and relative improvement), and Optane Memory is Intel’s first crack at that challenge. Optane Storage will come at a later time, probably in the form of an AIC similar to the DC P4800X.

We didn’t embed a lot of slides for this piece, as we’d rather just wait to do our own research.

Optane will technically enter pre-order availability today. Like always, we strongly encourage not pre-ordering hardware. We will have reviews. Wait for those, then determine if the advantages benefit your uses. Exercising patience is invaluable for new hardware launches.