The ASUS X299 Rampage VI Extreme is the company’s flagship board for this platform, with TBD pricing at this time. The motherboard hosts four full-length PCI-e slots at x16/x8/x16/x8, permitting quad-SLI on the 44-lane CPUs. An additional 4-pin MOLEX connector is present, like on the Zenith board, for ancillary PCIe power. We’d like to see ASUS stop using MOLEX connectors, really, given that this is probably one of the only reasons you’d install one in a modular PSU.

Other PCIe lane assignment goes to the M.2 devices, with one hidden beneath the semi-translucent ‘armor’ (illuminated with mock circuitboard trace LEDs) and support for more through a DIMM slot. The DIMM slot is something ASUS started doing somewhat recently: It looks like an extra RAM slot, but houses an ASUS DIMM card that can host 2x M.2 SSDs. Sort of clever, for this one. 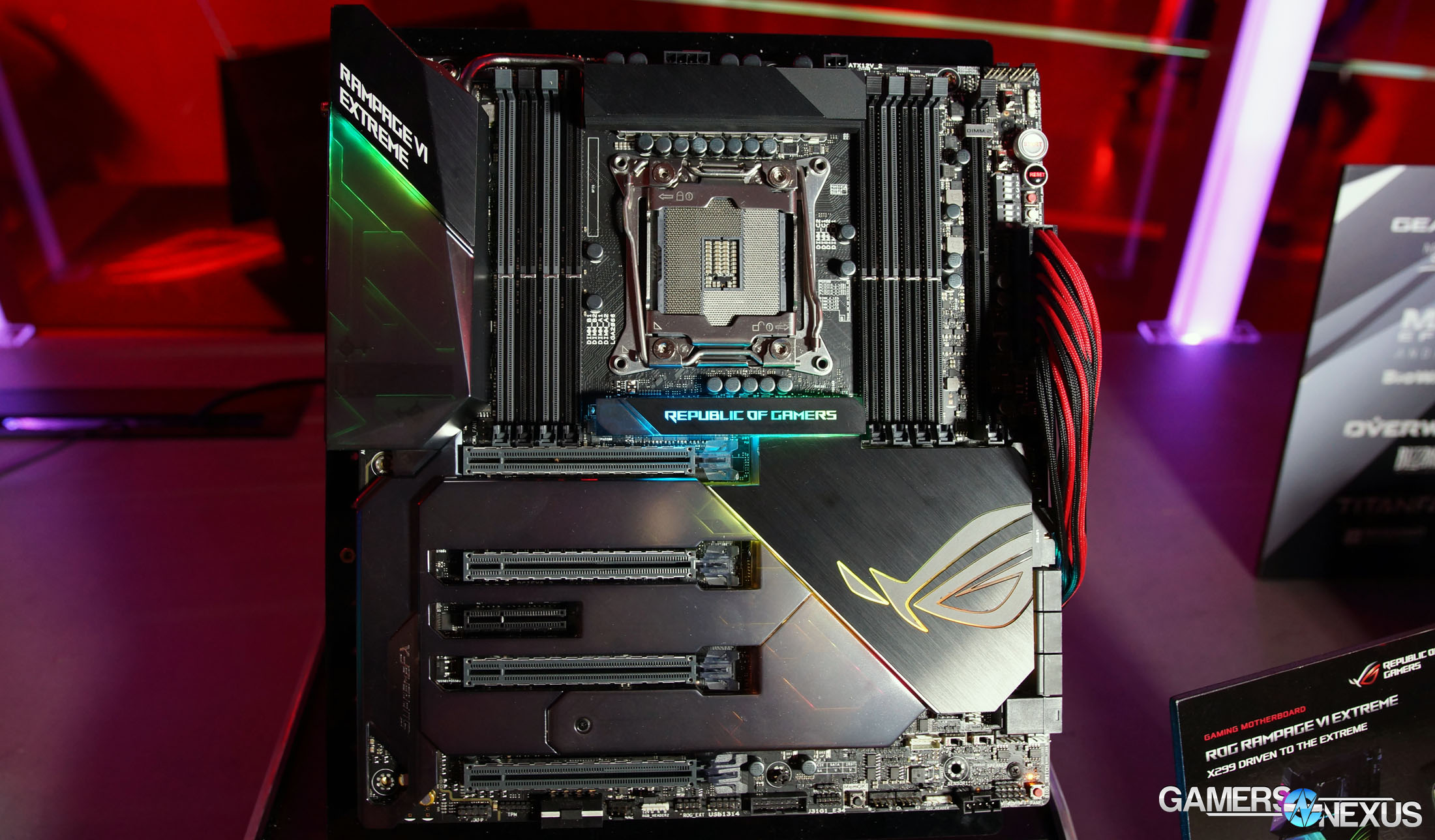 For other IO, the board will come with 10GbE, which seems to be somewhat common on new ASUS motherboards (X399 will ship with a 10GbE PCIe card). The Rampage VI Extreme further expands internet connectivity with an 802.11ad wireless card, as we understand it.

Power design is an 8+2 setup, but we do not yet know the FETs used. They are likely not going to be International Rectifier, from what we understand. 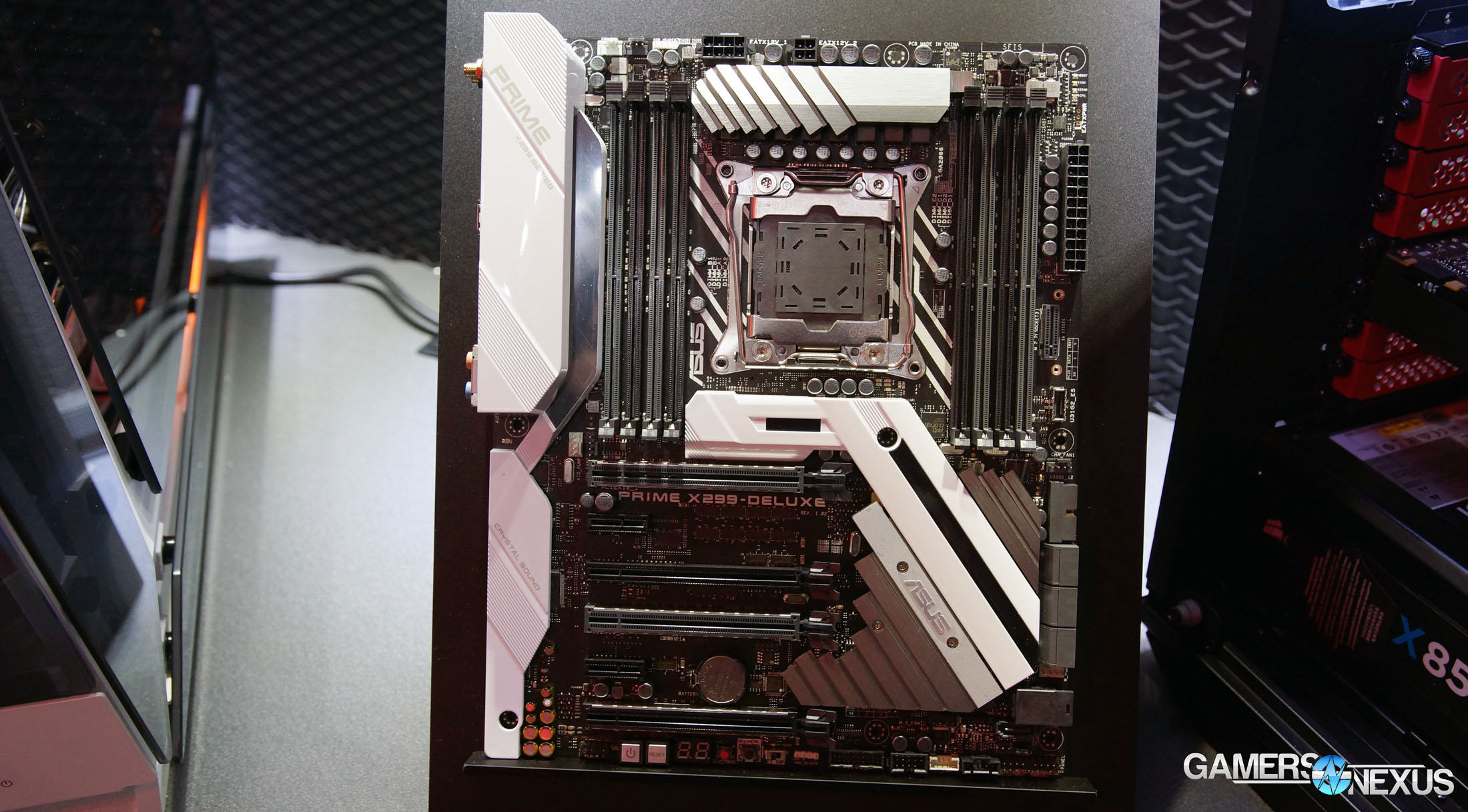 Historically, the ASUS naming scheme once dictated that “-A” signified USB3.0 support – though that would be on every board on the market today. The Prime-A X299 motherboard opts for a black/white (and some silver) design, its primary notable point, with an otherwise less densely packed surface of IO and heatsinks than the Deluxe. The audio cover, for instance, is removed on the Prime-A.

The Deluxe motherboard could end up using the same VRM design as the previous board, looking like another 8+2 setup, though is otherwise unspecified. As with all the other 4+4DIMM boards, each side possesses two phases for memory.

This board is crammed with debug and OC features, all lining the bottom edge, with plenty of buttons and toggles to play with. We might look at this more in the future. 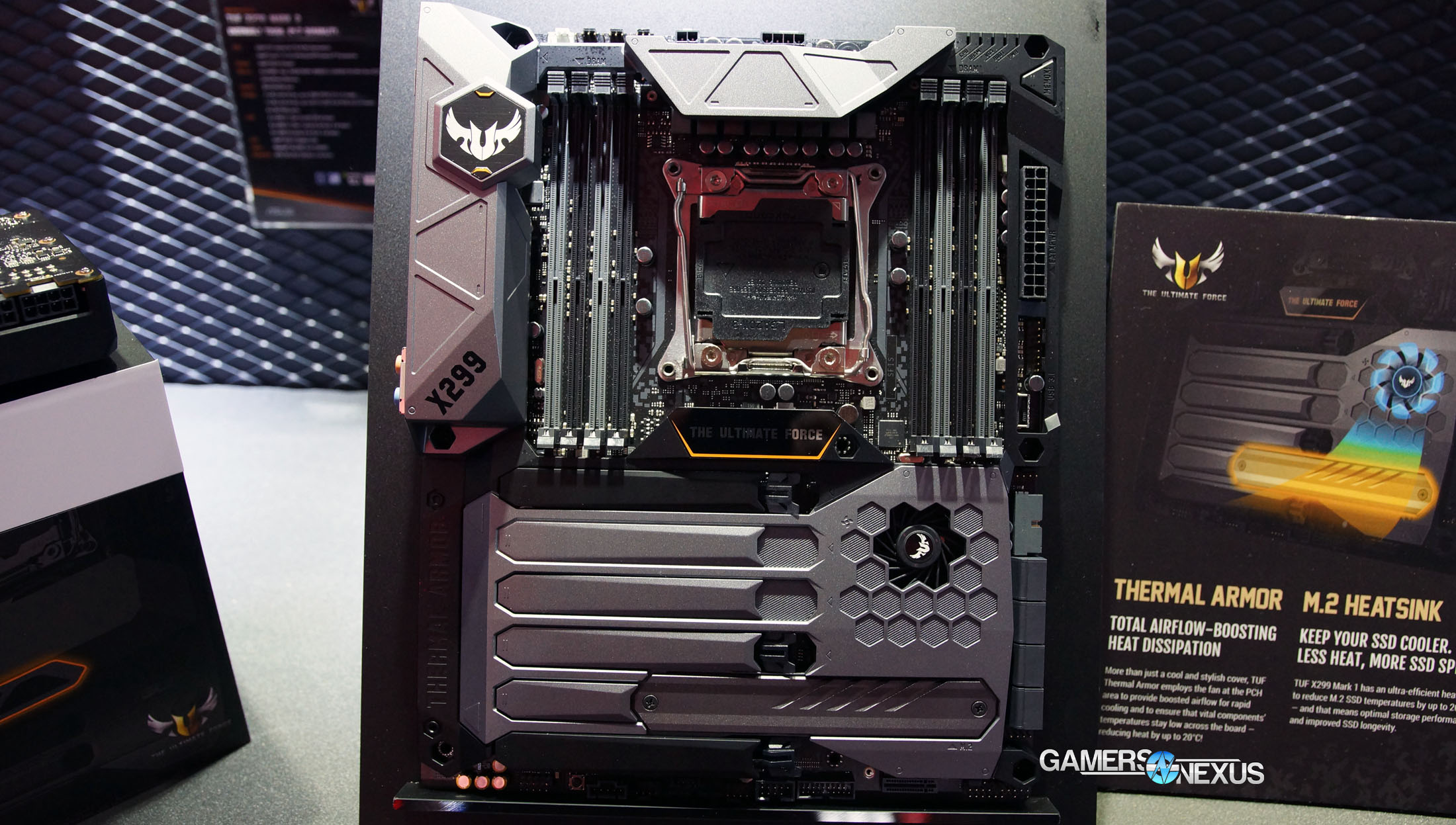 The final board we were shown was the ASUS TUF Mark 2 motherboard, carrying a simpler PCB layout – though still cluttered – with some gray stylization near the socket. The board sheds ASUS’ extra DIMM slot for M.2s, sheds PCIe slots, and simplifies the lower edge hardware to just the necessary pin-outs. The TUF Mark 2 will run the cheapest of the boards on this list, but we’re still not sure the price.