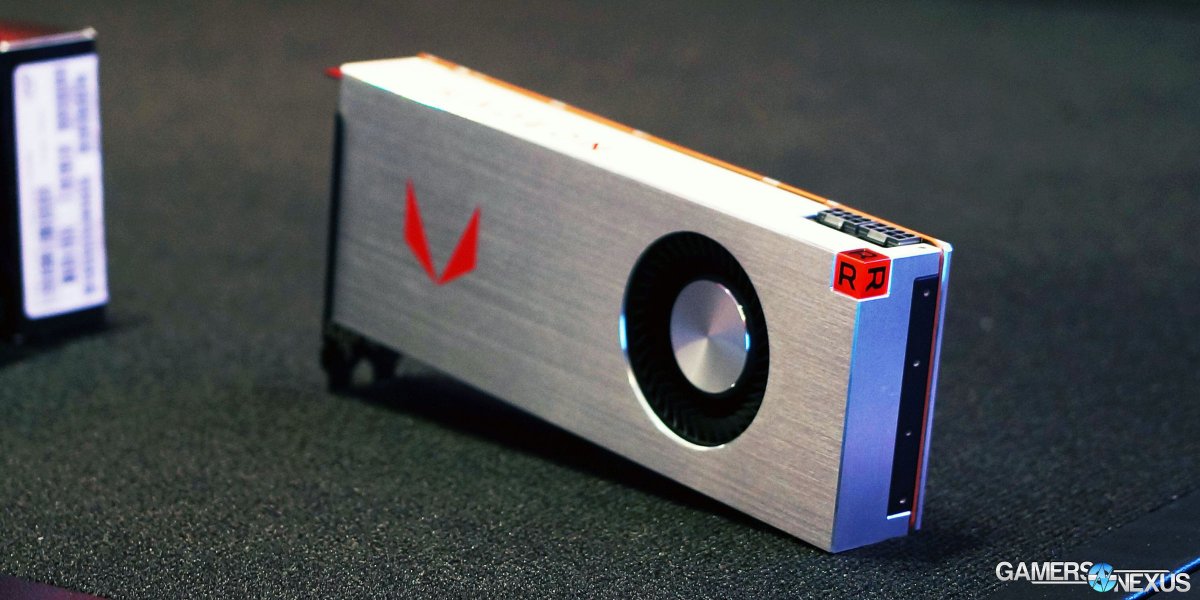 Here’s a chart we made of the known specifications of the RX Vega 56 & RX Vega 64. The names are indicative of CU count on each – RX Vega 56 has 56 CUs, and so has 3584 cores, and RX Vega 64 has 64 CUs for 4096 cores. Keep in mind that AMD and nVidia core counts are not comparable as the architectures differ. 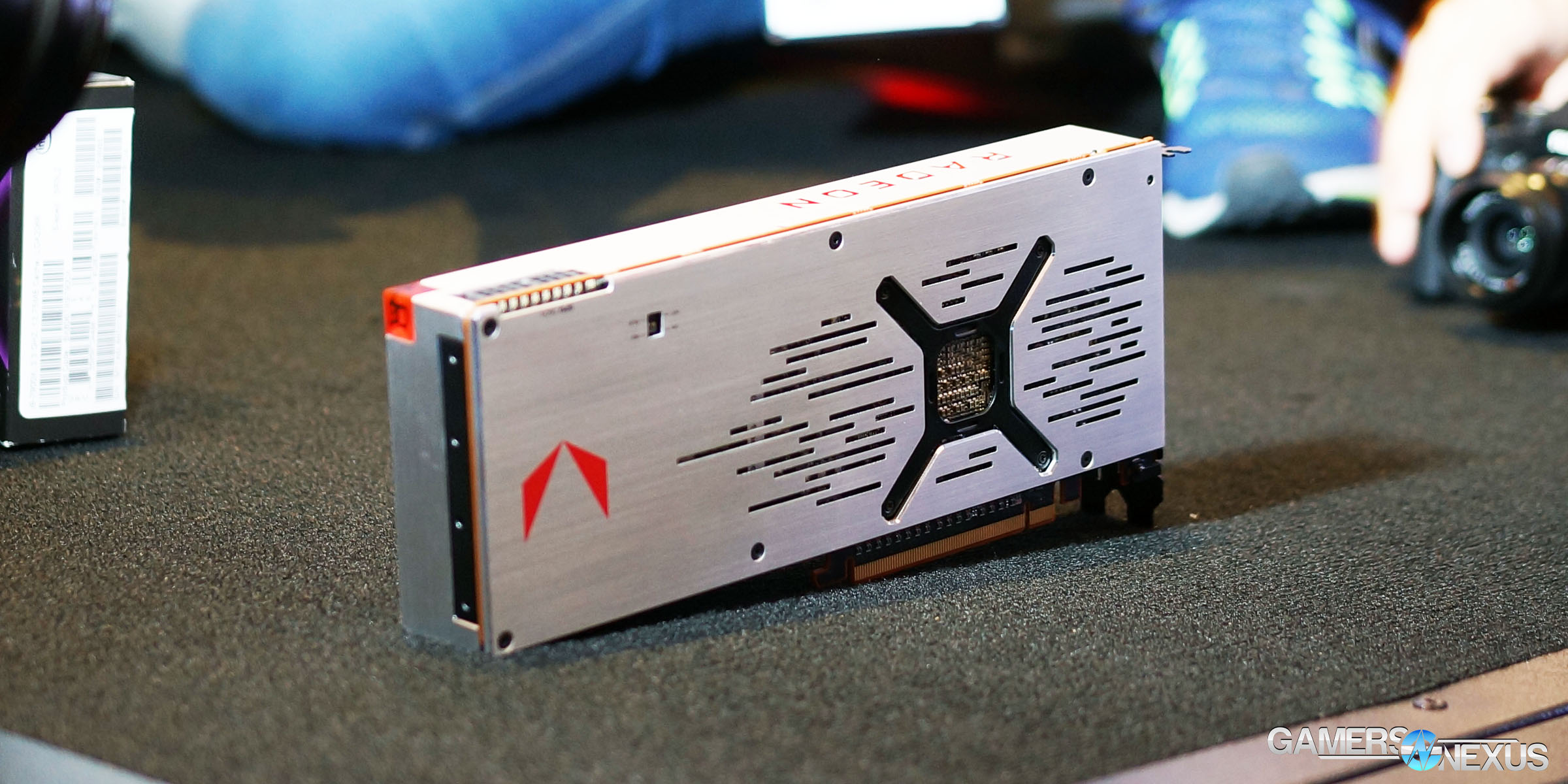 Each CU has 4 TMUs with AMD’s architecture, so a 64 CU RX Vega card will run 256 TMUs, while the 56 CU option will run 224 TMUs. Vega 64 will also host 64 render back-ends, which are responsible for delta color compression in memory and color buffer compression to save power. The cards also have a 4MB L2 cache and use the same 2048-bit memory interface as the Vega FE card. That means that RX Vega is still running two HBM2 stacks, except now at 4GB per stack for 8GB total.

As for power tuning, we asked whether this was just tightening of the power target or if actual power performance features were enabled under the hood. Turns out, RX Vega isn’t just a matter of restricting power target, they’re actually doing something for power optimization. We couldn’t get explicit examples at this time. One thing we do know is that the voltage targets change, so voltage checks are at different frequencies than FE, and voltage should be lower. We’d expect that this will align with our findings in the undervolting testing on Vega: Frontier Edition, where power consumption can equalize while improving performance. It’s still AVFS, but just a better tuning profile than FE.

We also asked AMD’s architects, including Mike Mantor, about whether DSBR was actually disabled in Vega: Frontier Edition or whether it was just a rumor. The architects loosely confirmed that tile-based rasterization was in fact disabled for Frontier Edition’s launch, which we think mostly aligns with statements about pushing the card out in time, and noted that DSBR will be enabled on both Vega FE and RX Vega on launch of RX Vega. We asked about expected performance or power consumption improvements, but were not given any specifics at this time. Wait for launch on that, though – we’ll get that information. 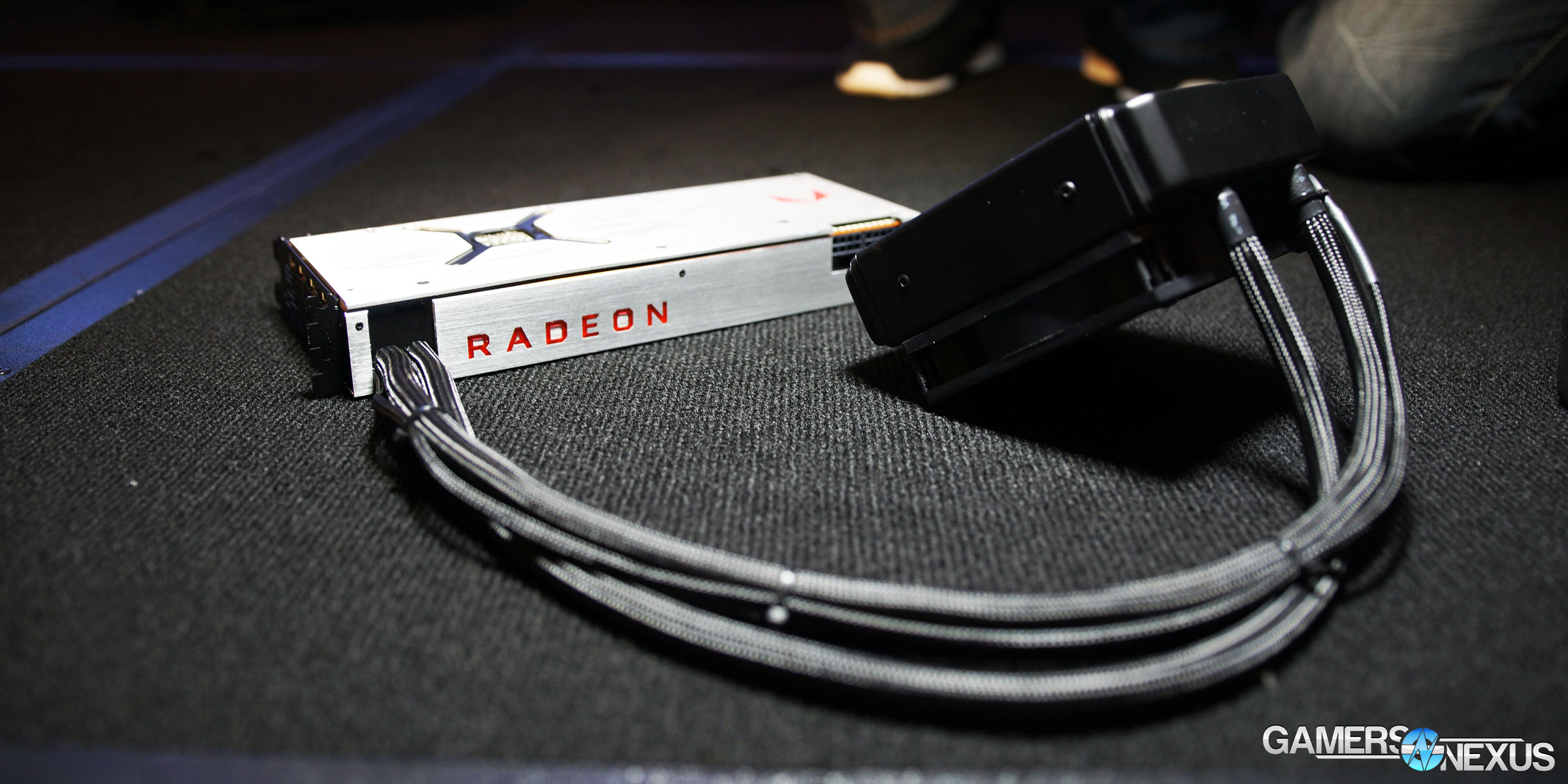 One more big thing: The RX Vega 64 card will run a base clock of 1247MHz and a boost clock of 1546MHz on the reference card. As a reminder, Vega FE had a target boost of 1600MHz, but hits 1440MHz or 1528MHz when operating at DPM states 5 and 6 because of power limitations. Theoretically – and wait for our review to discuss this – the RX Vega card should better maintain that lock, barring thermal barriers. We’ll look into it, though.

This architecture looks very familiar, so there’s not a lot to learn for folks who read our RX 480 deep-dive on launch day. A few additional items of note include the power saving features: We spoke with AMD team members at the event and learned definitively that specific power saving features were disabled on Vega: Frontier Edition to just get the thing out the door. RX Vega will run lower power.

That’s all on RX Vega now.

We’ve got a separate Threadripper video going live on the channel to cover X399 motherboards for the TR4 socket. Of note, a new AMD R9 1900X CPU was announced as an 8C/16T part in TR4 mounting, with a 3.8GHz/4.0GHz base/boost, XFR going to 4.2GHz on up to four total logical processors. Other major changes include quad-channel support on X399 platforms, with the usual OC behavior to Ryzen. The CPU will retail for $550.

Further, we learned that Threadripper will use silicon processor substrates to buffer the IHS and the dies, so while four total “dies” are present on the board, only two will be active. AMD told GamersNexus that the same two dies will remain active on all shipped Threadripper CPUs, which means that hotspots and thermal behavior should be the same on all TR4 CPUs. The other two “dies” are substrates meant to buffer mounting pressure between the IHS and the CPU.

We’ve got an XOC video on Threadripper that’ll go up at a later date, but for now, this is the main assortment of news releases.