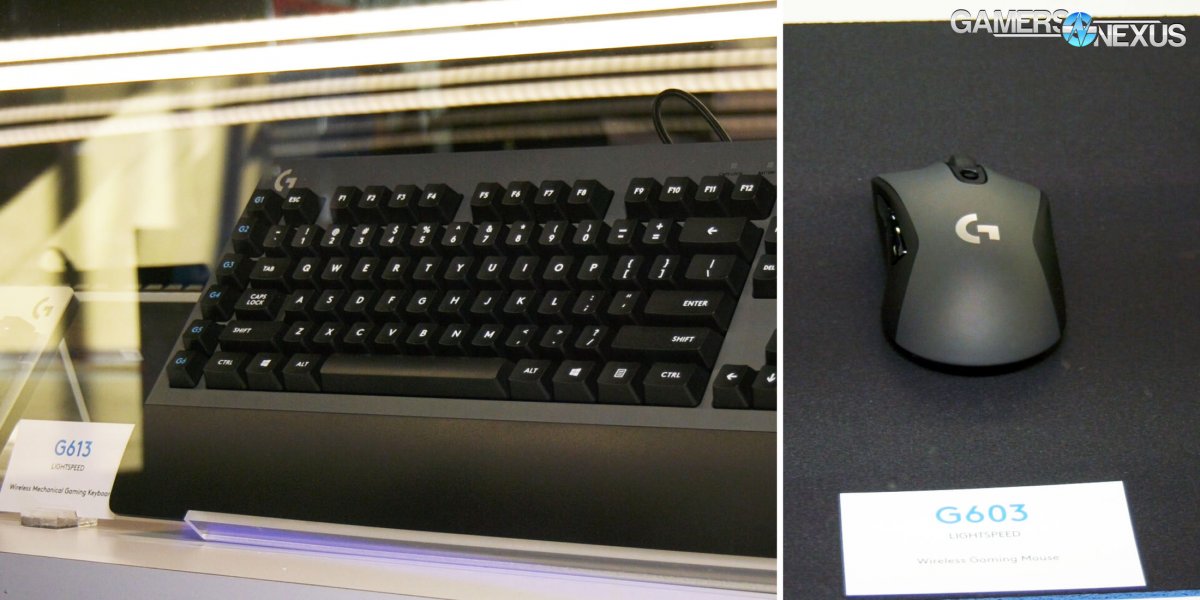 The G613 runs two AA batteries. Logitech notes that internal testing indicates an 18-month life of simulated gaming+office use, cycling daily. We’re not sure the exact split or uptime of that metric, but even if the keyboard is just within the ballpark, it’s still fully reasonable. A keyboard should not exhibit performance falloff as batteries drain – it’d likely just die. You’ll get the usual warnings prior to that point. Regardless, the keyboard runs a $150 price, has Romer G switches, and operates wirelessly. That’s more or less the start and end of it.

The mouse is a bit more interesting, to us: Its sensor is branded the “Hero” sensor – sort of makes “3366” sound less marketable – and reduces relative sensor-to-power consumption by an advertised “10x.” This is just sensor consumption, so your mouse won’t suddenly live for 5000 hours, but any gain is a significant gain in the world of high-performance device battery life. Most of the sensor’s power consumption reduction comes in the form of faster image processing and pixel tracking, permitting the sensor to sleep between workloads. Logitech’s G603 battery life is marketed as a 500-hour continuous number, which roughly translates to 4-6 months of “real” use. Unless putting a mouse on a glass turntable is real use, in which case, you get 500 hours. Pretty damn good. Switching into a “low” speed mode increases report rate from 1ms to 8ms and modified other precision functions, offering a stated “3x” uptime boost. Low speed mode would be used for non-gaming and non-precision applications, like web browsing or office work.

As for the performance side, the new Hero sensor has a maximum FPS capability of 17,000, compared to the 3366’s 12,000FPS, and more remarkably continuously steps FPS vs. IPS, rather than stepping in fixed increments. The big thing, though, is that Logitech hasn’t forsaken its use of the 3366 – it’s still used in most their active mice, and still a competitive product. It’s just that the Hero has been selected for these power-constrained applications, promising performance which is not appreciably worse than the previous high-performance (3366) solution. That’s the goal. Differences can be measured in machine testing, but we’re told that user ability to appreciate any such gap in 3366 vs. Hero performance is likely limited.

Speaking of prodigal gamers and idols to peripheral mysticism, we noticed some early rumors about the G603’s battery configuration and “reduced performance” in certain scenarios. Logitech’s G603 has its batteries configured in parallel for the G603, permitting the mouse to operate on a single battery when desired. This could have interesting practical applications in the form of reducing mouse weight (by the weight of one battery), and would result in “only” sacrificing roughly half the capacity. That does not, however, impact performance. The mouse isn’t receiving less voltage, it’s just got half the capacity to pull from. That’s all. There will be no performance loss from halving the batteries, but there will be a ~15g (or whatever your battery’s weight is) difference in heft.