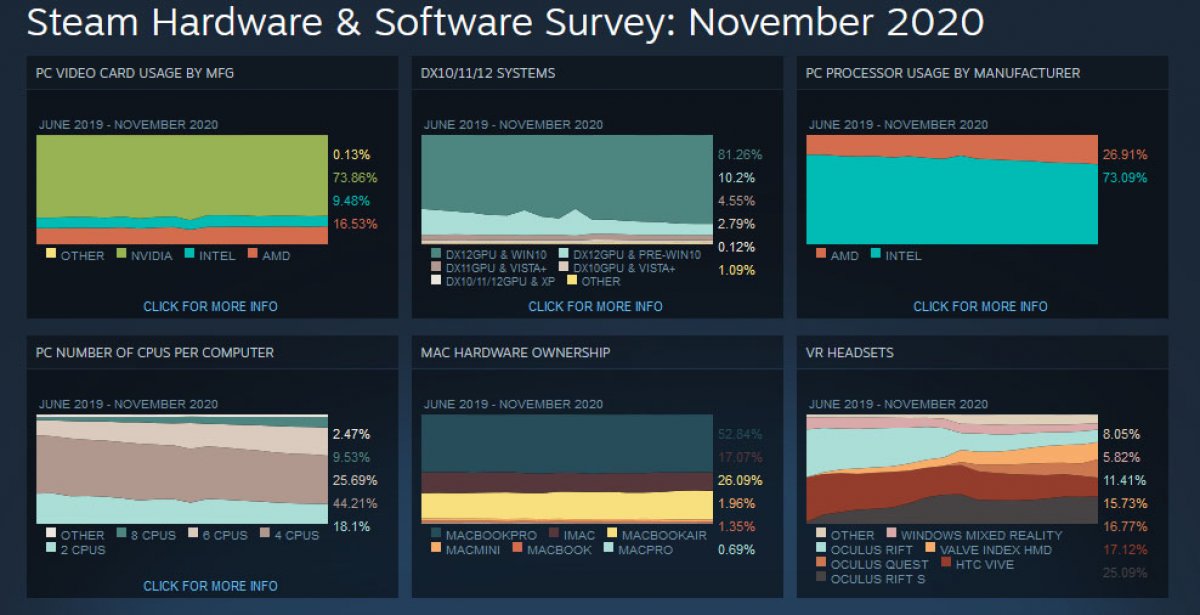 As the end of the year approaches, things remain busy as ever with yet more GPU launches, Cyberpunk 2077 coming out, and plenty of cooler reviews. However, we’ve managed to scrape a few interesting stories together, amidst all of the end-of-year content (GN’s included).

We have the most recent Steam Hardware Survey, which continues the trend of AMD snatching up CPU market share, but getting beaten 18 times in the top 20 GPU rankings. There’s also a minor update on Nvidia’s supply woes, as it relates to the RTX 30-series drought.

We also have a bit more to go over, as you’ll find the usual article and video embed below.

November’s Steam Hardware Survey is here, and as expected, it shows AMD’s Ryzen CPUs steadily moving up the charts. We’ll preface this with the usual disclaimer: Steam’s data is by no means absolute or conclusive and is a cross-section of its user base; however, it's the most popular PC gaming client on the planet, and the data it captures can help paint a picture of what hardware is out in the wild.

That said, according to Steam, AMD CPUs now account for more than a quarter of Steam’s installed user base -- or 26.51%. That’s an increase of 0.72 percentage points from October. Just back in July, AMD CPUs were sitting at 23.73%. Additionally, in November of 2019, AMD CPUs were at 20.5%, or a 6 percentage point gain. Meanwhile, Intel still commands the lion’s share at 73.49%.

AMD’s CPUs have been ascending Steam’s charts all throughout 2020, and that’s unlikely to change as we head into 2021, where Intel isn’t expected to have Rocket Lake ready to go until sometime late in the first quarter.

For core presence in computers, 6-core and 8-core systems have grown in size over the past few periods, with 4-core and 2-core CPU systems showing the biggest decline.

The NVIDIA RTX 30 series did appear on the charts, but it only crept in just barely in this last quarter: The RTX 3080 appears way down the list, ranked around number 73, emerging from nothing to 0.23% share. The next Steam survey will be the more interesting one for getting a gauge on new GPU market share and utilization.

The rest of the data -- from operating systems to resolutions to RAM -- are virtually unchanged from last month.

As the great RTX 30-series drought of 2020 continues, Nvidia offered a surprisingly sober update on the status of supply. Nvidia indicated that it can’t get enough silicon to meet demand; however, it seems the supply limitations extend to other components as well, including substrates.

The update comes by way of a webcast over at Nvidia’s investor page, where Nvidia CFO Colette Kress spoke of the supply problem.

“We do expect it probably to take a couple months for it to catch up to demand, but at this time, it is really difficult for us to quantify. So, we stay focused on trying to get our parts to the market for this very important holiday season. Each day things continue to improve. But before the end of the quarter, we will be able to provide some more information,” Kress said. NVIDIA’s quarter wrap-up will be in January.

10:30 | Certain Intel Xeon and Atom SKUs Will Be Built by TSMC

A job listing (which is no longer viewable) for a QAT Design Integration Engineer suggests that certain Intel Xeon and Atom SKUs may be among the first to be built on one of TSMC’s process nodes. Intel’s manufacturing troubles are well documented at this point, and we previously mentioned that Intel would be making some key manufacturing decisions early next year. Primarily, decisions regarding which chips it will manufacture in-house, and which it will outsource to TSMC.

While the job listing appears to have been taken down, it offered the following job description:

As to what SoCs Intel is referring to is anyone’s guess at this point, but it perhaps offers a glimpse at what Intel has in mind when it comes to what TSMC will handle.

A new research paper out of Sweden is interestingly extolling the benefits of graphene enhanced heat pipes. Should you require a primer on how heat pipes and heat sinks work, it's a topic we’ve explored before -- both in written and video format -- including factory tours showing the manufacturing of heatpipes.

The paper itself is fairly lengthy. The paper outlines the current struggle with power density in lightweight and portable ICs and electronics, and how cooling solutions are struggling to scale with them. Historically, heat pipes are made of copper or aluminum -- or copper or aluminum-based alloys -- and use different tubing materials inside to transfer the heat through the pipe. Most heatpipes used in electronics are copper with sintered copper powder.

The research paper lays-out how the researchers built a graphene heat pipe based on graphene assembled films (GF), three different inner wick structures (made from plasma treated graphene films, carbon fiber mesh, and carbon fiber bunch) and an ethanol-based fluid. The heat pipe was tested in lengths of 90mm, 130mm, and 150mm.

The paper concludes by saying:

“In summary, we have demonstrated, for the first time, the application of using graphene to build heat pipes for cooling purposes. With optimized wick structure, a GHP exhibits specific thermal transfer coefficient as high as 7230 W m−2 K−1 g−1, which is 3.5 times higher efficiency than the well‐designed commercial copper based heat pipe. Besides, a heat transfer model was built to explain the contribution of GF in the GHP. It opens the possibility to use graphene for thermal dissipation, especially in situations where lightweight is required as priority.”

ASRock’s Z490 Taichi motherboard recently got a BIOS update that adds a PCIe resizable base address register feature to the Intel platform, ahead of NVIDIA’s official push via motherboard makers for Intel and AMD alike. We have not tested ASRock’s update and likely won’t, seeing as we don’t presently recommend any of the company’s Z490 motherboards, but we’ll revisit resizeable BAR testing as it rolls-out to a wider base of hardware.

As a reminder, PCIe RBAR isn’t a magic bullet to make all games better. The range for improvement is 0% to about 10-11% in what we’ve tested thus far, and it’s possible that the change can be negative without driver-level optimizations or disabling RBAR in certain games at a driver level. This is why NVIDIA is taking so long, and it’s why AMD did custom driver work to get it out to begin with.

MSI claimed that it is also working on a PCIe RBAR feature for its Intel 400-series motherboards. The company put out a press release on December 4th that indicated Z490, B460, and H410 would get updates, with Z490 available almost immediately.

Related to the previous story, we had to use a Google webcache version of the MSI Z490 PCIe RBAR announcement to capture for this video, and that’s because MSI took the page down. The reason MSI took the page down, it appears, is because that page includes CPU-Z screenshots of an Intel CPU with listed codename “Rocket Lake,” a reported 125W TDP, 14nm technology, and an unidentified CPU ID of 0000. The CPU lists a frequency multiplier range up to 50x, but as this is an unintended leak, we don’t yet know if that’s a finalized spec or a lower frequency engineering sample. We can’t draw conclusions as to performance from this.

The CPU is listed as an 8-core, 16-thread part. We won’t know more for another month or two.

This one is a bit of a stretch, and we aren’t currently able to substantiate any of the alleged information presently. Yet, for the sake of speculation, we’ll discuss it briefly. A bit of background first, though.

Once upon a time, during the Jim Keller days of AMD, Project SkyBridge layed out AMD’s ambitions to develop pin-compatible Arm and x86 SoCs, with the K12 core aimed at being AMD’s fist custom Arm 64-bit Armv8 CPU core. The K12 design was destined to replace the Opteron A1100 series that used Arm Cortex-A57 cores, and was supposed to show up at some point in 2016.

Fast forward a few years, and the K12 never showed up; although AMD has neither confirmed or denied that the project was scrapped. Rumors insist K12 was shelved to focus on Ryzen, and that the CPU landscape at the time wasn't ready for SoCs that married x86 and Arm cores. It’s likely that the K12 wasn’t abandoned entirely, and yet still lives in some form.

This would lend a bit of credence to a new rumor that AMD may be resurrecting the K12 in some capacity to now address the burgeoning Arm market. Apple’s custom Arm-based silicon -- which recently debuted in the form of the M1 -- is set to push the Arm ecosystem into new fronts, and it’s probable that AMD doesn’t want to limit itself to x86 forever. As we’ve said before, you can be sure chipmakers are watching the reception to Apple’s M1 closely, and whether or not AMD trots out some derivative of the the K12 -- or something else entirely -- will likely depend on what happens over the next year or so as Apple expands its own Apple Silicon to compete with the reigning x86 class.

Our last story comes from audience members who emailed us about AMD B550 and X570 motherboards and XMP stability challenges. This was something we had come across in testing, but with the wave of GPU launches, we haven’t had time to investigate it. As such, this section shouldn’t be taken as reporting, but just as some general troubleshooting advice for those who are experiencing instability with XMP on AMD systems.

In our testing, with X570 boards in particular, the RAM timings out of the box were too tight and we had to adjust them manually. This was an issue with the boards running them too aggressively. What we’re seeing in forum posts and in emails sent to us is that XMP is causing some systems to fail to boot. With what we know so far, the best way to solve this is by manually loosening the RAM timings -- at least, that’s what worked for us. Sometimes, especially on Gigabyte boards, we’ve also noticed that VDIMM isn’t set high enough for the clocks, often left at 1.2V instead of the XMP voltage (check your RAM sticks).

As for loosening timings to get a boot, we generally do this by enabling XMP and then going back to the timings and loosening them -- make the numbers higher, basically, until it turns on. A simple start would be with the four (or five, in the way some boards lay it out) primary timings -- working in increments of one to two ticks at a time until the system boots. Other timings to look at would be the RFC, TFAW, or TCWL. This is a time consuming process, but will often get it bootable. Tighten them after you get a boot to find the middle-ground. This is not a story we intend on pursuing due to our time constraints this month, but we did want to provide a place for people experiencing the issue to start resolving it.