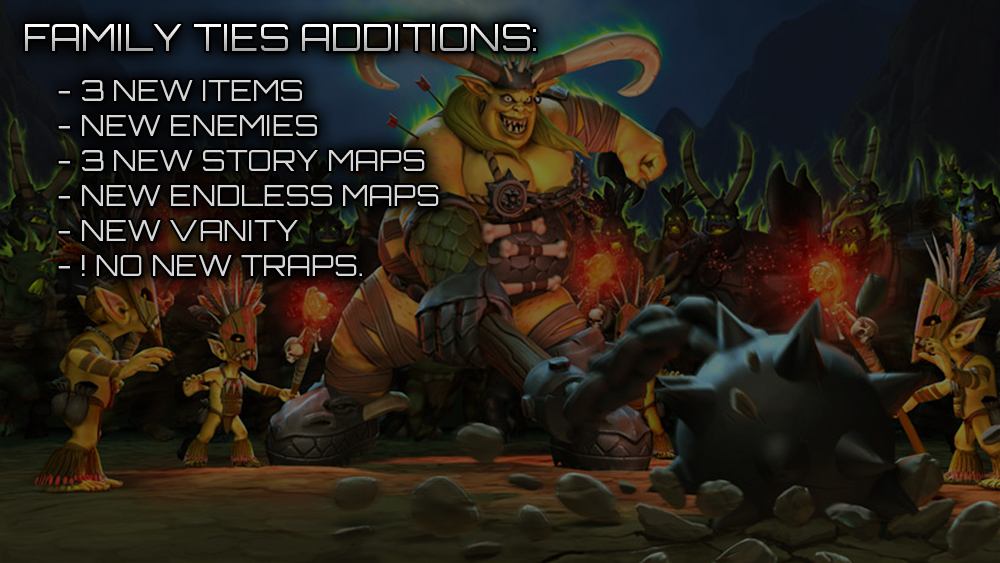 We've found OMD2 to be a great way to take a break from more serious games, although OMD2 certainly has a more limited shelf-life (this is where the booster packs come in).

Our video playthrough and write-up of the previous booster / expo pack, called Fire & Water, can be found here. With that said, here's a video gameplay overview of Orcs Must Die! 2's Family Ties booster that I've compiled (in league with our resident co-op orc-murderer, GN-Space) that should help give you an idea of what you're getting for that $5 bill.

So, as I said in the video, I think things are pretty clear-cut: This doesn't feel like some sort of greedy DLC grab -- it feels like a legitimate attempt to add new and fun content to the game. With that mentioned, it's really only about an hour of new story play, so if that's all you're concerned about, I'm not sure if I could say it's worth it. What is worth it, though, are the new weapons and endless levels, which add quite a bit of customization and new combo action to the game.

I'm not sure if the Stone Staff will see a whole lot of use, but it seems like it could be good -- it just needs to find its niche build. The Teleportation Ring is very good, though, and can be used in just about any scenario. The freeze effect alone is worth it, but the fact that you can mark and recall pushes it over the cusp of greatness.

Finally, the new enemies add a huge challenge to the game -- if you like a challenge, definitely give Breakneck Triad a go.

If this is something you're interested in, you can get the new expansion pack on Steam.

Here's a transcript of the video, for those at work:

Hey everyone, this is Steve from GamersNexus.net! Today we're looking at Orcs Must Die! 2's newest expansion pack, Family Ties! This booster adds no new traps, but does introduce some cool levels and weaponry that can be applied toward your orc-killing goals.

First, let's go over the new items! In traditional Robot Entertainment humor, they've added a new Stone Staff -- a powerful, stick-resembling object which has the ability to stone orcs! Despite the team's play on words, this staff does not, in fact, send the orcs scrambling in search of Doritos and Mountain Dew -- no, instead, it turns them to stone, thus immobilizing them and making them seemingly more susceptible to certain attacks. The primary attack doesn't take mana and is a ranged area-of-effect attack, but is very low-power and sub-optimal for most situations.

I found the staff to be extremely useful when applied correctly, though it often took a backseat to the other new installments due to its relatively limited primary functions.

The Ring of Teleportation is a universally applicable item, we found in our, uh, testing. Although Space and I didn't use the ring for its actual teleportation capabilities all that often, we did find it very appealing for its explosive capabilities! In classic telefragging fashion, a quick dimensional jaunt will explode all those who stand in the area, and a freezing upgrade will ensure that even the newly-added Ball and Chain orc will stand frozen in place.

We found the ring to be incredibly useful in most applications, especially as a last-second freeze effect that, as a bonus, causes some explosion damage and teleports you elsewhere.

Finally, on the items front, the Family Ties pack has introduced the Jar of Ghosts! This jar is fairly straight forward: If you get hit by an orc, it is temporarily fear-stricken and will retreat -- I found this to be incredibly useful for when I got stunned by larger enemies, which would then retreat for just long enough for me to bunnyhop away. The active ability will place down a set of skulls -- these instill fear in the orcs and will send them cowering, running all the way back through the traps they just made it past. This, with perfect execution, gives your traps the potential to execute up to three times on the same set of orcs. It also buys a lot of time, which can be crucial.

This was one of the most usable items for my load-out, but that's mainly because I tend to enjoy traps with slower reset times, so this nets more use for those traps.

The new pack also adds two new orcskin outfits, which are available for both characters; these outfits cost 35 skulls and have a cool blue appearance.

Moving on! Up next, we have the new enemies that were added by the booster pack!

The aforementioned Ball and Chain enemy is, to quote Robot Entertainment's website, "an enormous female Orc wielding a powerful mace that's bigger than you are," is a high-powered slugger who seems to shrug off conversion effects and causes immense damage with a single swing. To top that off, the other new enemy - Hobgoblin Healers - keep her health maxed when she starts taking damage. So take out those healers early!

Of course, new levels are probably the most desired additions from these content packs! Luckily, we actually found some really fun levels this time around -- although the Fire & Water expansion had some relatively bland levels, I found the Family Ties pack to have a bit more variety and some incredibly fun chokepoints for trap experimentation.

The first of the levels, Rush Hour - which seems to be using the same naming scheme as the previous pack - had the best chokepoint and made for very fun and explosive gameplay.

Breakneck Triad is the second level of the new pack, and it's also available in Endless mode, for those who love to play with new trap combinations. We found this map to enable intense gameplay that was incredibly challenging -- with three angles for attack and no central funnel through which the enemies feed, Space and I split our traps between the entries and struggled when Ball and Chain enemies assaulted us en masse. It's easily one of the hardest maps I've played yet.

The last new map is Triple Threat, which is primarily based around a central hold-point in a convenient hallway; this means you can easily exploit it by placing your deathbox throughout a contained space, but it makes for fun play.

There was also Stairs of Doom, which is a new endless mode map, although it's fairly simple -- it's just two stairways.

Is It Worth it?

You can read my full thoughts on the expansion in the short article overview - which is linked in the description - but to sum things up, I'd say it's probably worth it. The thing is, you're paying five bucks for a few levels and some new weapons. It's about an hour of new content in story mode, then however much time you can extract from endless mode. If you don't find endless mode any fun, it'd be hard to justify five bucks. The new weapons can be incredibly useful, albeit certainly not required to enjoy the game.

It's ultimately your decision: If you like endless mode and are the type of player who can't get enough item combinations, give it a go. If you could care less about three new items and an hour of story mode, and don't really care much for endless mode, well, it might be best to pass until the next sale.

That's it for now! I'll see you guys next time, peace!