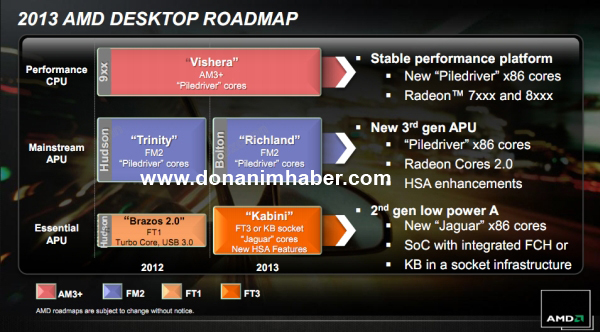 It should be noted that none of these chips will use Steamroller, AMD's next planned architecture, which will supposedly deliver large improvements over the Piledriver series. This means -- assuming this graphic is legitimate -- we likely won't see Steamroller until 2014, when we suspect AMD will next release its new architecture. 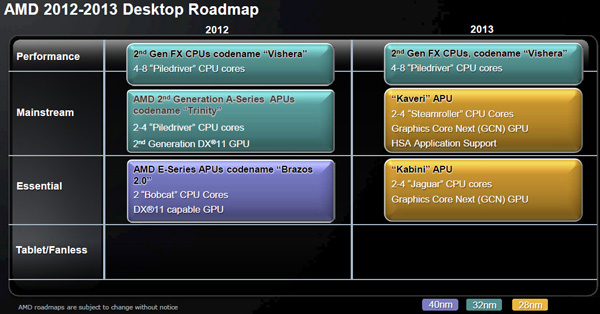 The original roadmap: Steamroller was originally slated for a 2013 release.

With AMD's Bulldozer and Piledriver platforms outperformed by Intel's Sandy Bridge and Ivy Bridge series (though not in the $100 market, but the $120 i3-3220 gives AMD a run for its money), AMD seems to have directed its attention away from performance CPUs for 2013, and is instead developing their APU branch. This could be a wise move considering AMD's recent difficulties. Because PC enthusiasts and performance users make up a microscopic percentage of AMD's customer-base, it's not all that surprising that AMD is stepping back for a moment to re-evaluate its plans for future performance CPUs and niche markets. 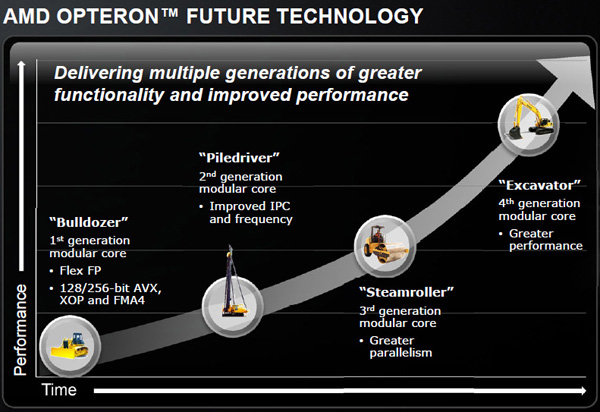 APUs fit in cleanly with AMD's general approach to offering solid performance at a low price; by eliminating the need for a dedicated video card, they make it possible to own a cheap build that can handle casual gaming in addition to everyday tasks. We first featured AMD's earlier APUs in our HTPC build guides, which were targeted toward home-theater and gaming-lite system builders.

The two new chips on the chart are codenamed Richland and Kabini. Richland includes an improved integrated Radeon chip, where Kabini is slated to replace Brazos 2.0 in netbooks and other mobile devices, using the new low-power Jaguar cores (replacing Bobcat). Vishera will remain AMD's high-end CPU for 2013—whether it can still attempt to compete with Intel remains to be seen.