With StarCraft 2's first two installments (Wings of Liberty and Heart of the Swarm) behind us, Legacy of the Void now looms on Blizzard's ever-obfuscated release schedule. It'll be done when it's done. Until then, BS Mods' Rod Rosenberg designed and built a Protoss-inspired "Cosmic Force" case mod of Rosewill's Blackhawk gaming enclosure, topped with Bob Stewart's intricate paint job.

Let's take a look at one of the best StarCraft- and Blizzard-inspired case mods to-date: The Cosmic Force, featuring Protoss themes on a Rosewill Blackhawk.

For the full gallery, including in-progress build photos, check page 2 of this post. All photos by BS Mods. You can learn directly from BS Mods over on their facebook page.

In speaking with Rosenberg about his headlining mod under the BS Mods banner, we were told that the project began in early September: Rosewill approached the renowned modding team and requested "something for BlizzCon using a Blizzard game." Rosenberg's love of StarCraft made the game choice easy, but design spanned from September through October; the build officially began on October 5th and was completed on the 28th, with more than 300 hours of sweat and paint into the final product. 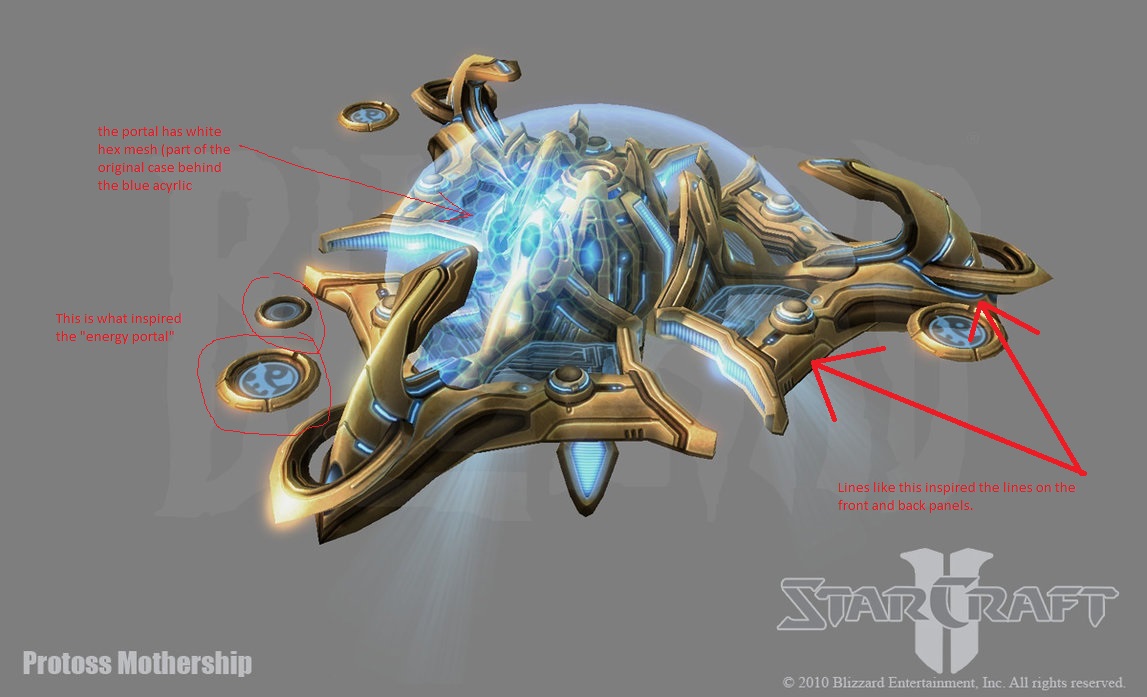 When asked what they took the most pride in, Stewart told us:

"The things I love on it are the mirrors on the inside. We used some mirrored panels for the floor and optical drive cage. It gives the appearance that the case is huge inside and you can see all the detail work on everything we did. The energy portal on the right side panel also shocked us -- the light behind it shines through the clear coat of the paint, so it looks like it's floating [off the panel]." - Bob Stewart.

Rosenberg gave some perspective on the difficulties involved in case modding, stating:

"The toughest part of this build was coming up with a concept to fit the back panel with the rest of the mod. I designed the lines and Bob [designed] and built the "energy portal" on the back. Both of us love this part of the build - in person, it's just crazy cool!" - Rod Rosenberg.

Speaking of, if you'd like to see the build in person, it'll be on display at BlizzCon all weekend at Rosewill's booth.

The moment you're all waiting for:

A full worklog can be found here, if you're a modder or want more details on what exactly was done.

Let's give some stuff away, yeah?

Today, Rosewill released a limited/special edition of their Blackhawk case for BlizzCon, featuring blue trim and highlights around the bezel. The case has the same featureset as the Blackhawk, just a new blue/black scheme using the "Blizzard Blue" color. We're giving away these products:

Winners will be selected with the following methods:

Of the above options, we'll select five winners. Winners will be contacted via the means through which they entered the contest. If you're a facebook winner, we'll PM you on facebook (please make sure your privacy settings allow this); if you're a YouTube winner, we'll PM via YouTube; if you're a commenter below, we'll email you (so checkmark the 'notify me via email' box and leave a valid email address); if you post on our forums, we'll email you and reply to your post.

It is not possible for the same person to win more than once, but you can enter once with each of the above methods. This means you can enter up to five times.

You must make all entries by Friday, 11/22, at 11:59PM EST. We will select winners at this time. Winners will be notified within 24 hours. We will announce winner user names / twitter / YouTube handles (no other information will be posted) upon receipt of the game. If you're a facebook winner or entered using your full name, we will announce your abbreviated name (example: Steve B.).

First of all, our privacy policy is posted here. We will not share your information with anyone. Winners will have their address shared with Rosewill purely for shipping purposes.

That's all! Enjoy! Be sure to check out page 2 for the full case mod gallery.