Much like the appreciated Rosewill R5, the Stealth is a cost-conscious case. We can’t think of any cases that include a top panel SATA drive dock, a two speed fan controller, and a windowed side panel at the ~$60-$70 range MSRP. This would be an excellent value if a retailer ran a special on this case. If this new offering proves itself on the test bench, let’s just say you might be seeing this in one of our budget gaming builds.

If you’re a fan of the first edition of the Rosewill Blackhawk, then the second iteration may interest you for a future build. They’re still working out the final design details, but we have a basic idea of what’s going into the case. 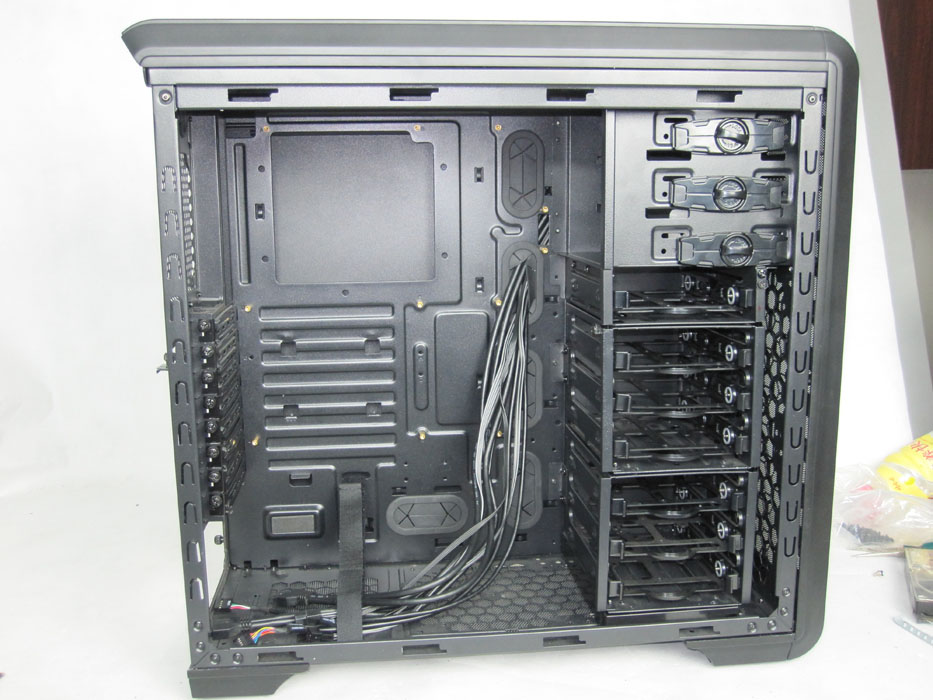 The top panel is equipped with standard front I/O (2xUSB2.0, 2xUSB3.0, 2x3.5mm) as well as a small storage area that’s discretely covered by a metal plate that magnetically attaches to the case. This creates a uniform look when the top panel ports aren’t in use. What we saw on the demo model and hope to see in the production model was an additional SD card reader and Micro SD card reader, which make life a lot easier for photography. It’s nice to avoid occupying a USB port with a card reader.

One final note here: We don’t have a fan count for this unit. Rosewill’s reps couldn’t give us a definitive answer on this yet, but if it’s like its predecessor then expect as many as 5 fans pre-installed.

To cap off the gaming cases we take a quick look at the $120 Rise. This case has two push-to-release click in fan filters on the front and top as well as a slide-in filter on the bottom. 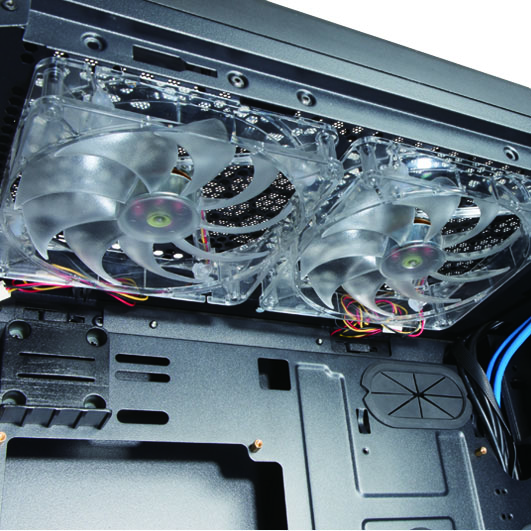 The more interesting part of this case is what may turn out to be an innovation in drive mounting. While it does have a conventional drive bay about midway in the bottom (supports up to 4 drives), Rosewill introduced what they’re calling a removable 2.5” bar. This bar, which removes by unscrewing 4 thumb screws, is positioned in parallel with the case sides, and is closest to the side opposite the motherboard. It will handle up to 4x2.5” drives also mounted in parallel with the case sides, thus eliminating the need for any drive bays that might inhibit air flow.

In addition to the three gaming cases, they also brought two other mid-tower enclosures – the Legacy MX2, which is a brushed aluminum design that comes in both black and silver, and the Legacy QT01, a noise-dampening model.

The team has apparently been busy developing small form factor cases. All of these -- with the exception of the Legacy V6 Plus -- come in both black and silver / brushed aluminum. The V6 is a Mini-ITX cube that could easily be mistaken for a speaker, offered only in black. The other cases divided themselves evenly between Mini-ITX and Micro-ATX. The two Micro-ATX models are the Legacy U3 and the Legacy V4. The Mini-ITX offerings are the Legacy V3 and Legacy U2. The Legacy U2 may be the most interesting of the bunch, especially if you’re thinking about a DIY SteamBox. It can fit 220mm video cards and 175mm CPU coolers – which is larger than the SilverStone AR01, so that’s about every reasonable cooler on the market. That offers quite a range of compatibility in a small box.

We should be getting a few of these cases in soon for a more detailed analysis, so check back in the future.