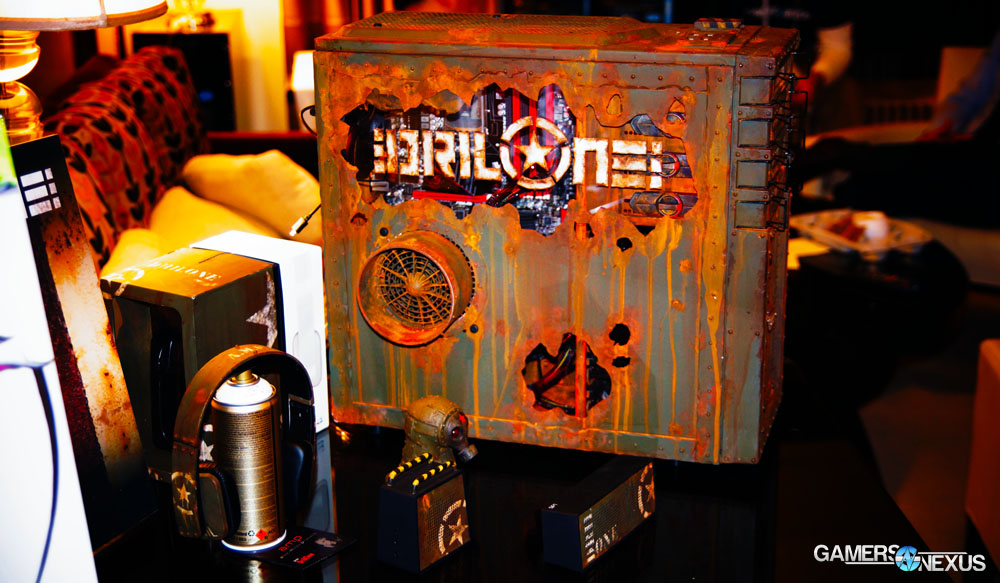 To start things off, Antec showed us a retooled version of their ultra-budget GX700 -- which we previously reviewed -- effectively a "Punisher" version of the case, called the GX900. This case is tailored toward gaming system builders supporting ATX, micro-ATX, and mini-ITX motherboards. It has 310mm of clearance for video cards and 170mm of clearance for high-performance CPU air cooling solutions. If you decide to go the CLC route, the case also supports a 240mm radiator solution attached to the top. It has standard drive bay options, front panel connections and controls, expansion slots, and a bottom mount for the PSU. The stock cooling shipping in the case includes 2x120mm front intake, both connected to a top-mounted fan controller. 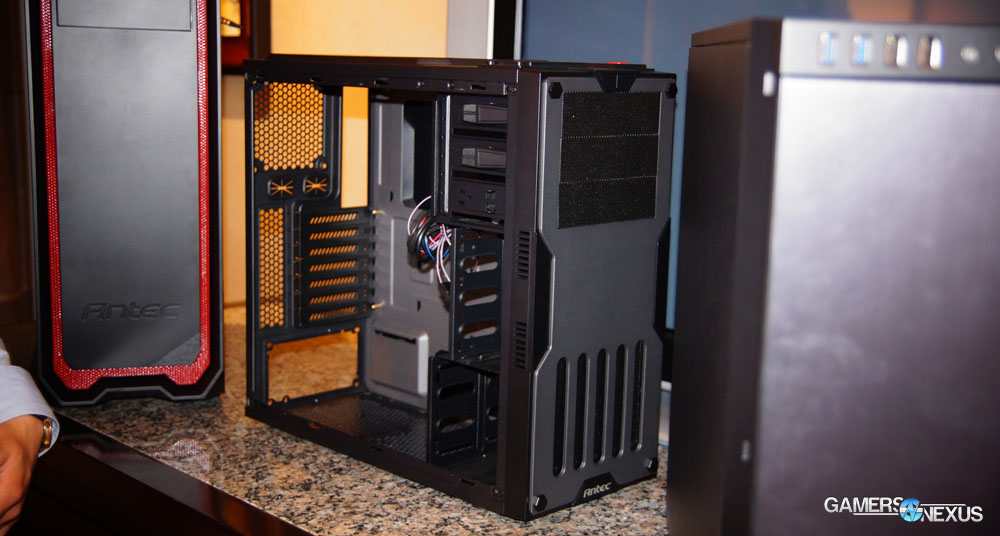 The P100 -- a sleek, discrete case -- resembles its predecessor, the P280. Its design lends its usage toward either an office machine or an unobtrusive desktop tower. The top, front, and both sides have sound absorbing foam attached to them to accompany the unobtrusive theme. One of the concerns we had when handling the case during the demo was the quality of the front panel; we’d like to see it reinforced a bit due to a flimsy feel during opening, and beefing-up its thickness will provide a higher-quality, more damage-resistant presence. The case is built for the same three form factors as the GX900, has room for two optical drives, seven storage devices, and seven expansion cards. Surprisingly, it's actually a bit roomier than the GX900 and has space for a 317mm video card and a 170mm CPU cooler. Nearly every budget-friendly air cooler on the market ships in the 150-165mm range, so this case should accommodate most go-to choices (including the Hyper 212 and SilverStone AR01). The case I/O is on the front in this model, offering 2xUSB2.0, 2xUSB3.0, and standard 3.5mm In/Out. 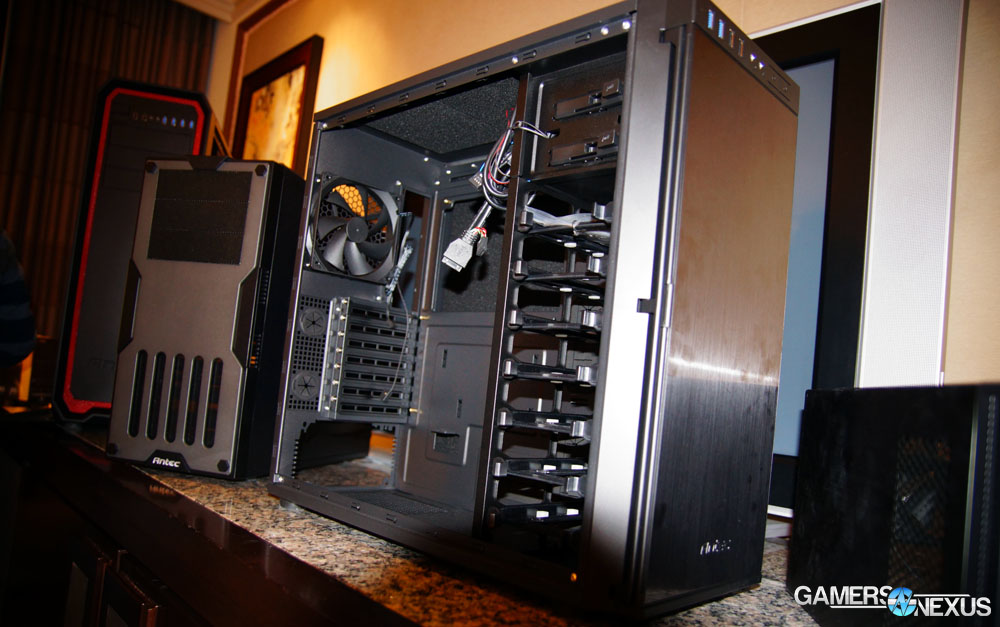 Continuing a trend that we saw forming at CES 2014, Antec added its own case to the booming mini-ITX market. The ISK-600 is a fairly open case with room to fit full-sized video cards into a small form factor space (similar to what we saw in the SG08, just much cheaper). Adding a fluid-dynamic bearing fan (explanation here) was a nice touch here to keep noise down if the box will be used in the living room as a Steam Machine/Box or DVR replacement. One final item to note is that a small form factor PSU (SFX) is required, like the one showcased in SilverStone's SG Station 2 eGPU enclosure. 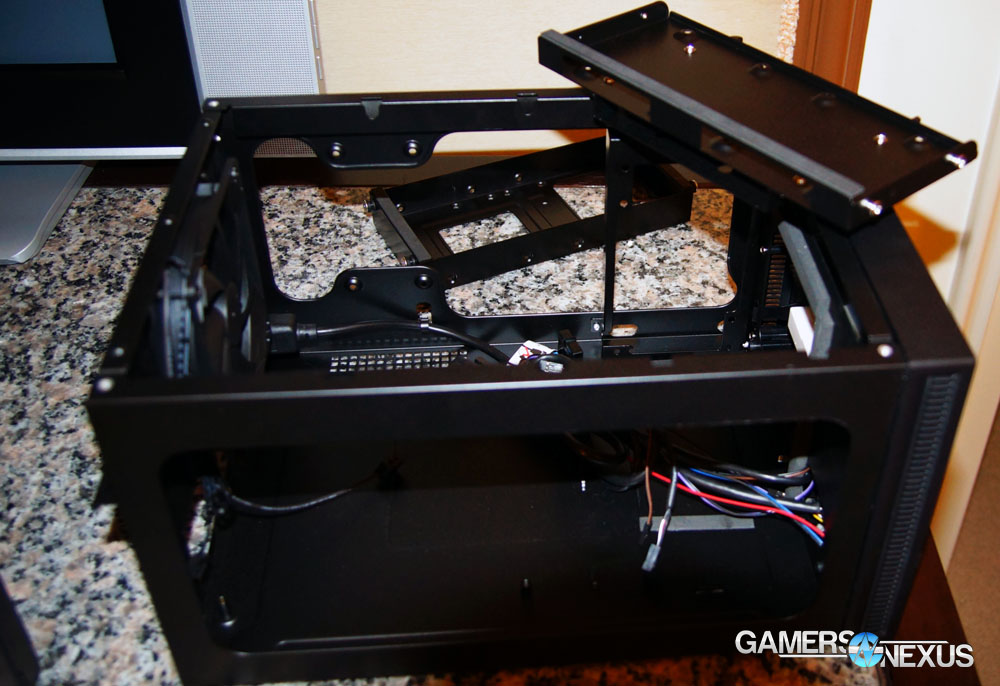 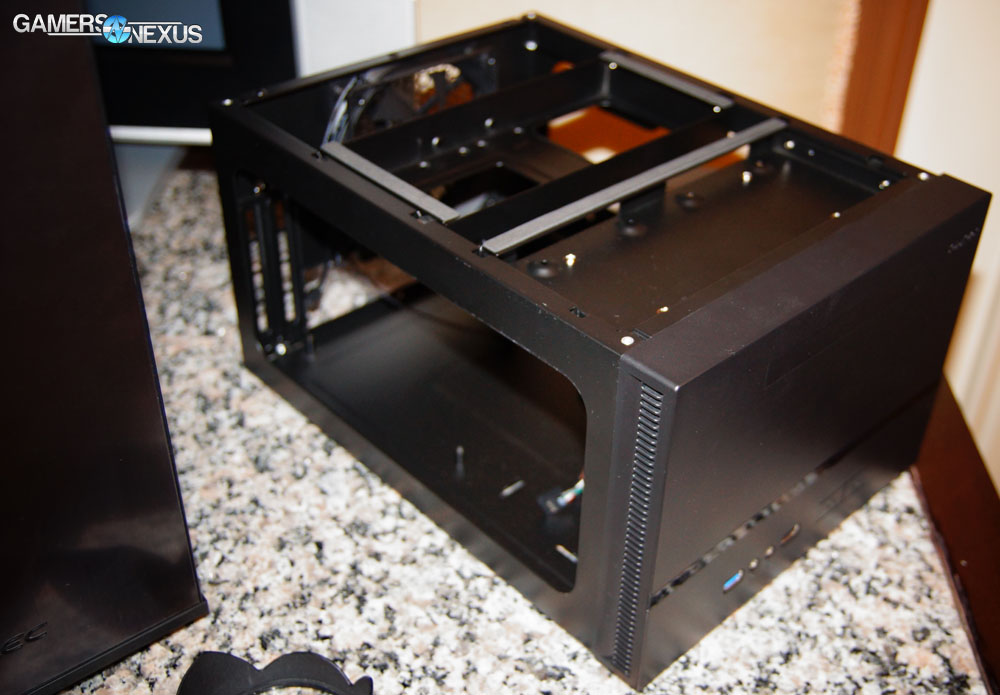 Now for the big fella: Antec's Nineteen Hundred. This is a case made for the enthusiast, ready to support as many drives or video cards as you can afford to throw at it (17 total drive bays, 9 expansion slots). It comes in two familiar themes, an nVidia green trim or an AMD red trim, and as enthusiast builders would expect, the Nineteen Hundred sports a large, plexiglass side panel. Antec claims that this case is built to last with its thick steel construction, 6 long-life FDB fans, and room for even the biggest graphics cards at 330mm.

The interior is spacious, able to support SSI CEB, E-ATX, ATX, Micro-ATX, and Mini-ITX boards. Interestingly enough there is also enough room for 2xPSUs, meaning that, in theory, there's space to do some modding and actually put two mini-ITX systems in this one box (or OC-link the PSUs). Just watch out for exceeding the 1500W breaker maximum that many households have. 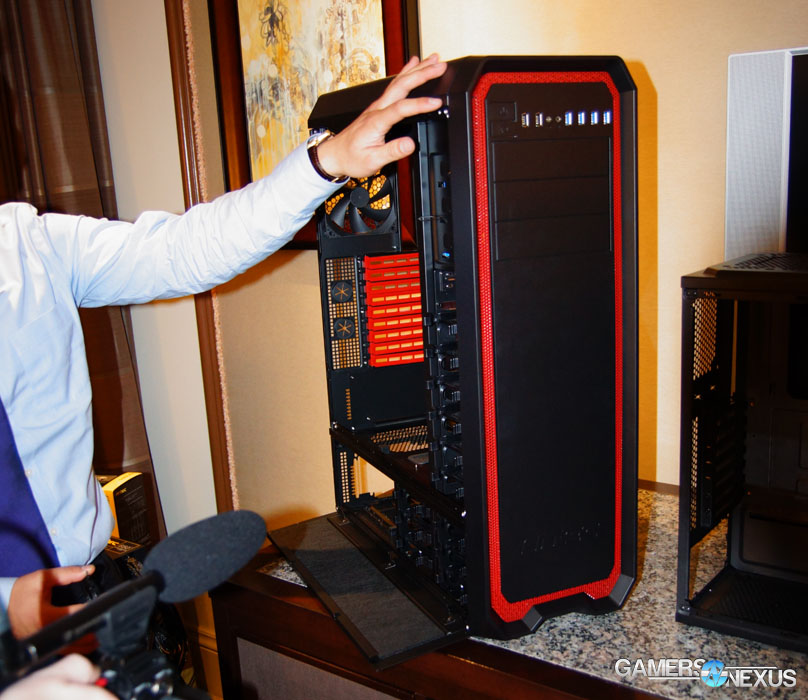 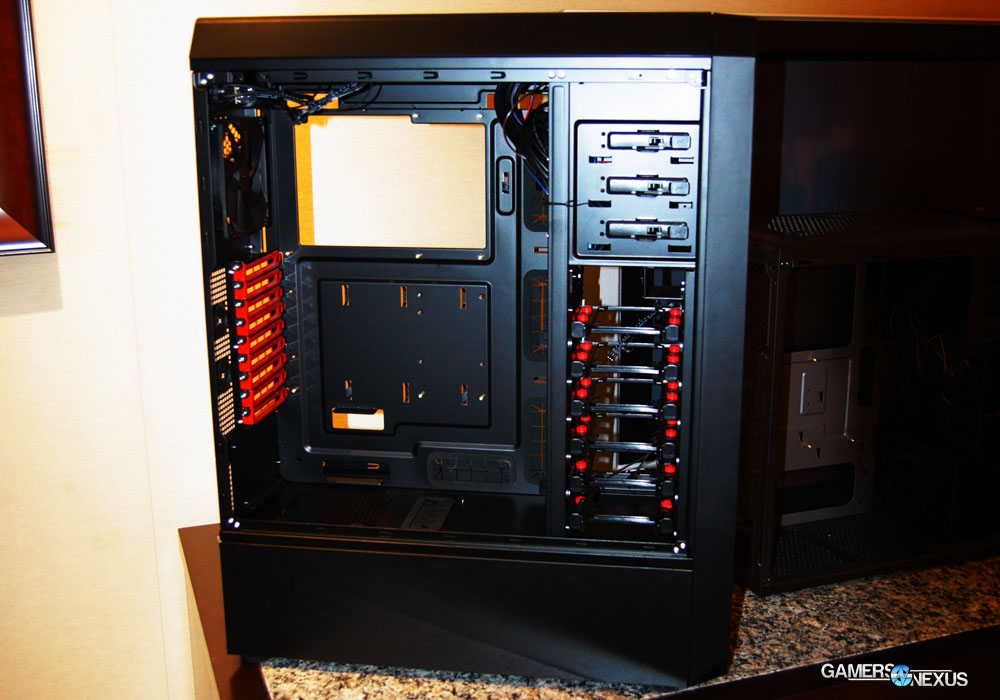 Antec also added 5mm of space for the CPU cooler, bringing it to a gracious 175mm. The airflow design puts 3x120mm fans in the front intake position, 2x120mm fans in the top exhaust position, and the expected 1x120mm fan in the rear exhaust position. If you're wondering where the larger fans are, the Nineteen Hundred is effectively a skinnier Corsair 900D (preview here) but retains much of the interior system build spaciousness, so the thinner width means skinnier fans.

If you choose to go with liquid cooling, there is ample room to mount a 240mm radiator in the top of the system. As a finishing touch, Antec provides buyers with an exceptional 4xUSB3.0 front panel ports in addition to the expected 2xUSB2.0 and 3.5mm In/Out. If you're liking what you're seeing and reading, make sure you have room for this beast before you purchase it. It's big, think skinny Corsair 900D kind of big.