The , , Carrboro, Chapel Hill, , Morrisville, and Garner areas (and ) that Google is targeting presently have a wide range of two options for ISPs: AT&T and TWC.

Infernal pit-fiend of the Nine Hells and TWC CFO Irene Esteves previously claimed that "we just don't see the need of delivering [Google Fiber speeds] to consumers," implying that customers are plenty happy with the 1Mbps they get while uploading 2GB YouTube videos for a technology website.

But the bitterness is not without warrant: TWC has lobbied NC officials in only the most ethical fashion to banish competition from the state, you know, because it's theirs. TWC also canned their own attempt at high-speed internet ("DOCSIS 3.0") in several cities back in 2010; this was primarily a result of cities declining TWC's totally-reasonable and not-at-all-extortionate tiered pricing structure. Then-TWC VP of PR Alex Dudley exhibited his inability to understand why the filthy poors would need their service, anyway.

Luckily, the Triangle has been able to cling to AT&T's industry-advancing services for decades now. AT&T is known by locals for its blistering-fast 10-to-17 Mbps down-rates, a revolutionary upgrade over its already-glorious 3Mbps speed offered previously.

AT&T also happens to be in the process of patenting an innovative new service that will offer customers the exemplary non-option of paying extra for streaming videos and downloading games. This would be done using a fun, new credits system, sort of like what you'd find in a Kindergarten class where you exchange pennies for pointless objects -- except instead of pennies, it's your soul: Consumers would be given a number of credits to spend on video / movie streaming, P2P downloads (including game patches - Blizzard uses P2P for all its patches), and whatever else uses the internet. Exceeding the credit count would result in a price-hike.

Google Fiber is presently running through its checklist and "detailed city study" of the Triangle's core cities, where it will "[scope] costs and timelines for building a new fiber-optic network." Google's email stated:

"You’re among the first to hear: we’re beginning conversations with Carrboro, , Chapel Hill, , Garner, Morrisville, and to explore what it would take to bring fiber to a community near you.

Over the next few months, we’re going to work with city leaders on a joint planning process. We’ll assess what unique local construction challenges we might face, and then map out what we would need to do to bring Google Fiber to Carrboro, Cary, Chapel Hill, Durham, Garner, Morrisville, and Raleigh. This process will take some time, but we hope to have updates on which cities will get Fiber by the end of the year.

We’re excited by the possibilities here in the Triangle. Help us spread the word so that your friends and family also hear the news.

Share the graphic below with your friends and neighbors."

If you want Google Fiber to rescue your city and save the princess, tell Google here: https://fiber.google.com/newcities/

The infographic can be found here: 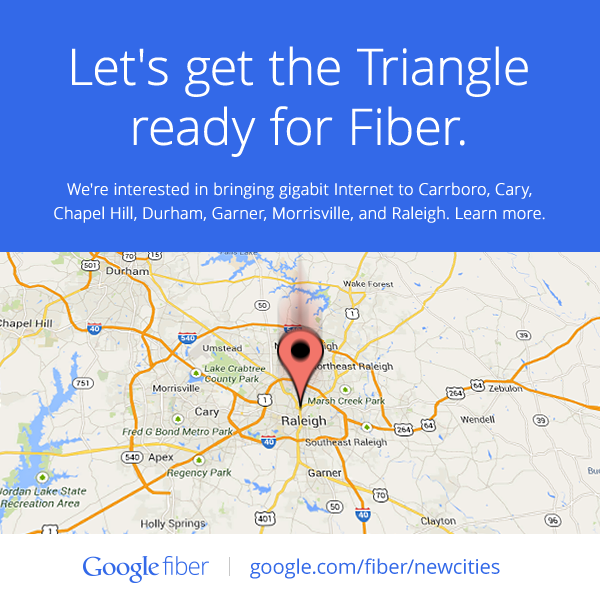