I played nearly an hour of Wolfenstein: The New Order at PAX Prime last August, and I experienced a visually-polished, fluid game (much like Bethesda’s other first-person action games, RAGE and Dishonored), but its core gameplay was largely reminiscent of 2002’s Return to Castle Wolfenstein and the subsequent wave of WWII FPS games. There was a routine feel of navigating a hallway and moving behind pillars & crouching behind tables. Duck, shoot, cover, shoot. Perhaps the only redeeming moments were the occasional gory stealth attack and a disturbing scene with series antagonist General Deathshead.

The limitation of my demo was that I was playing an interpretation of an old Wolfenstein game – a glimpse into the heyday of the franchise with a new coat of paint and some improvements to the mechanics. The New Order is founded on the franchise’s successes but adds new weapons, abilities, and enemies – like cybernetically-enhanced guard dogs (evil Rin Tin Tin?), augmented soldiers, and robots. Factor in that it takes place in a world where the Nazis have triumphed, and you’ve got an appropriate new beginning to the franchise. I break this down by AI, Characters & Cut scenes, and Maps & Environments.

The AI is not groundbreaking, but there are some improvements that liken The New Order to today’s shooters. Occasionally, soldiers will sound alarms if you go into a room guns blazing, causing reinforcements to arrive. This naturally encourages stealth-based approaches that I find equally rewarding. There are several different execution types (e.g., straight for the neck, grabbing the enemy and turning him around to face his executor, etc.), so I had a surprised and satisfied reaction every time.

I also experienced a few moments when I was ambushed. This becomes more frequent in larger environments because enemies can take different paths to you (pathfinding will encourage them to use the most effective approach), creating dynamic tactical advantages – aside from clearly outnumbering you.

When I thought I had cleared out a room, I had to check my 6, so I often felt surrounded even after the last body dropped. Yikes, this is getting vivid.

Some enemies slip in and out of cover, and there are times when the enemy will move around a larger object like a vehicle to stay out of your line-of-fire. I hope that the AI “thinks” to do this more often in the higher difficulty settings, because otherwise, many enemies leave themselves out in the open. I can understand that there’s a necessary balancing act to the AI, though; Machine Games intends to introduce more current-gen abilities for the AI while keeping the “fun factor” and nostalgic feel for series veterans. AI is also generally tough to judge in a convention environment due to the nature of developers actively ensuring players do not grow discouraged.

Perhaps the most impressive elements that push The New Order past other present-day shooters are the cut scenes and voice acting. The New Order carries a more serious tone than series predecessors, so the cut scenes support the gory action by giving the gameplay context and just the right amount of emotion. The id Tech 5 engine renders believable facial expressions and body language that few studios can capture – perhaps on par with Rockstar’s cut scenes. Blazkowicz’s reaction to the news that the year is now 1960 and that the Nazis won the war is a compelling reason to follow the storyline and feel connected to this alternate history.

The voice-acting and character profiles – Scottish, Polish, German, and the American Blazkowicz – are well-acted and lifelike. In-game banter from Scottish comrades provides comic relief and contrasts the barking Nazi commands, and Blazkowicz contributes to the cut scenes’ impact without the melodrama I’ve seen in other war games. The demo also fortunately featured the same scene with General Deathshead as last year’s demo, so I reveled in Deathshead’s snake-like cadence and intentionally slow gestures.

Voice-acting contributes to an already-impressive audio component. The New Order features some beautiful acoustic musical numbers – reminiscent of the Metro: Last Light soundtrack – that break up the action and let players ease comfortably into the storytelling. Equally impressive are the game’s immersive sound effects. The pulsating of the weapons, the screams from the Nazis barking out orders, and the clangs of metal create a constantly chaotic environment that wore me down and made me want to finish the level – I mean this in a good way. 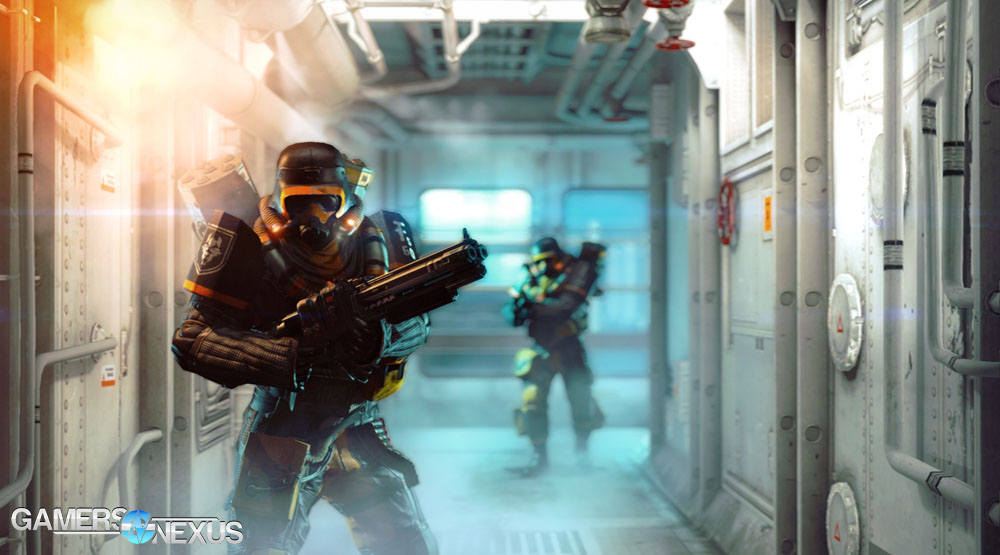 I played through several different environments in my PAX East demo, starting out in a bombed-out WWII bunker and battling my way through hallways and war-torn trenches. Then I scaled a castle wall for some classic Wolfenstein gunplay, dual-wielding through corridors and taking down cybernetically-enhanced dogs. I broke out of an asylum left bloodied by the Nazi’s capture, then finished by slugging it out at a Nazi military base.

The last of these environments gave me the best sense of how Wolfenstein has evolved to fit the modern shooter mold. The game is mostly on-rails, but the open environment encourages a player-defined path and subsequently a different plan of attack from the AI. I took to a bunker tower, mowing down enemies with a mounted machine gun, but then I opted to go around the side of the map to pick off enemies one by one. When doing so, I was met by a few charging enemies while others waited in numbers for my arrival. This presented itself differently from when I tried a down-the-middle approach and was challenged by the number of enemies firing at me at long range. You can guess how that went.

The close-quarters spaces make for the most intense combat, aided by their presentation as semi-destructive environments. I particularly enjoyed popping out from pillars and seeing the concrete chip away from enemy fire. Smoke from grenades also rendered well on the id Tech 5 engine and gave the skirmishes more of a claustrophobic feel as I eagerly awaited an enemy to emerge from the ominous gray cloud.

I’ve found a fluid, complete game with this playthrough of Wolfenstein: The New Order. It’s got vivid visuals, excellent sound, polished physics, and a storyline more compelling than many other FPS games. I’m not totally sold on the AI, and some of the gameplay – particularly during the WWII scenes – gets repetitive quickly, but overall, I’ve enjoyed the New Order and am curious to see how it finishes. We’ve reached a point in FPS gaming where there is seldom a thoroughly thought-out, lengthy, gripping first-person campaign. It will be interesting to see the impact The New Order has in its multiplayer-dominated genre when it releases May 20.