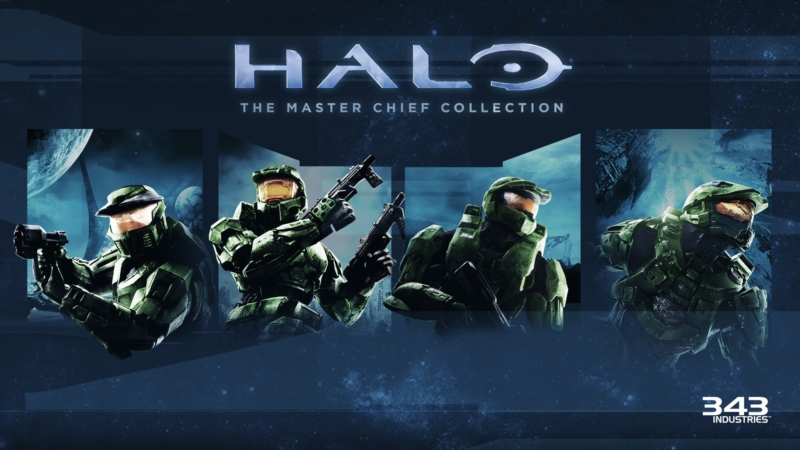 About the Master Chief Collection

Halo: The Master Chief Collection launches on Xbox One November 11. Those who preorder it are guaranteed Halo 5 Guardians beta access. Around the same time, Xbox will release a Halo Channel that will feature original Halo productions, content streamed from Twitch, 343 videos with tips and tricks, and more.

The Early Vision for the Master Chief Collection

Executive Producer Dan Ayoub kicked things off by recounting how the idea for Halo: The Master Chief Collection was conceived.

“What we wanted to do when we started development on [Halo: The Master Chief Collection] was make something for you […] We definitely wanted to do the anniversary treatment for Halo 2 just because it was such a pivotal game for so many people […] [343 expanded the idea and realized they had a new console] to have all of the Master Chief games on one platform at the same time. We said ‘Hey, wouldn’t it be fun if we could do 1, 2, 3, and 4 all on one disc at the same time,’ and that led to some really creative breakthroughs. That’s where that universal UI came from – the concept of having everything unlocked at the get-go so people could move around [between the games] however they want.” – DA

After 343 showed a quick behind-the-scenes video on the production of Halo Nightfall, Halo’s live-action miniseries, Partner Executive Producer Kiki Wolfkill shared how her team came up with the idea to set the series on a fragment of a destroyed Halo ring.

“We’re kind of coming from a place of knowing that Paul [Scheuring] and Sergio [Mimica-Gezzan] wanted to create a dynamic where […] the nature of [the space marine team’s] mission quickly changes and the story becomes about how that set of characters deals with that shift in mission and what that sort of means for them. It became really interesting when the idea of using the [Halo] fragment came up, because we kind of dug into, how could this fragment really have ended up there? What were the sort of physics in the event at the end of Halo 1 […] how did that […] help drive the plot that Sergio and Paul felt very strongly about? […] What does it still mean for [the fragment] to be functional and broken […] how does that affect the plot? And so it’s kind of this interesting sort of forensic analysis of the explosion of the original ring [at the end of Halo 1], and then looking forward, what we can define around it to help drive the plot.” – KW

Following a montage of Halo Channel content offerings, Ayoub started talking about the re-mastering objectives for Halo 2 Anniversary. He started with the game’s ability to instantaneously swap between the 2004 game and the re-mastered version, a feature that was implemented in Halo: Combat Evolved Anniversary to show the graphical differences.

“One of the things we wanted to do with Halo 2 Anniversary was evolve that [graphics swap] feature because we got a lot of great feedback from the community […] [we thought] ‘How can we evolve that feature a little bit [from Halo: Combat Evolved Anniversary]?’ First of all, that switch is now instantaneous […] so now when you do that swap, it’s right away […] One of the things we were passionate about […] was evolving that feature to include audio […] So now when you hit the swap, you also transition from old music & audio to new music & audio […] And it’s a pretty dramatic difference.” – DA

“When all of us here sat down to plan this, we knew that we wanted Halo 2 Anniversary to be a celebration but also an innovation […] Our goal was to adapt and re-orchestrate the iconic and masterful score of Halo 2 […] I wanted to announce for the first time today that we have returned to Skywalker Sound and recorded the massive Skywalker Symphony. We’ve added a 40-piece San Francisco opera chorus and 28 singers from the San Francisco Boys’ Choir.” – PL

Lipson then cued an audio teaser of one of Halo 2’s principle tracks. After the crowd’s applause, Lipson continued his announcements. Two original songs composed by Misha Mansoor, guitarist of the progressive metal band Periphery, will be part of Halo 2 Anniversary and its original soundtrack. These tracks replace the 2004 tracks from Incubus and Breaking Benjamin. 343 played a sample of one of the new tracks at the panel, and it was definitely giving me a Dream Theater vibe – making me excited for that moment in the game when I’m destroying a Flood-infested base in arguably the game’s most chaotic scene. Virtuoso guitarist Steve Vai also returns to the re-orchestrated score as a featured instrumental lead.

He then transitioned to 343’s efforts to rerecord all of the sound effects and reengineer the game’s audio design.

Halo 2 Re-Imagined Between the Ears

“It was […] an entire system design overhaul. We’ve rebuilt and reimagined every single sound in the game. That means we’ve [recreated sounds for] new weapons, new ambiances, new vehicles, everything. We’ve also designed some new systems that really make Halo 2 Anniversary shine. We have a new Reflection system, so the weapons reflect and interact in the environment that they’re in a much more realistic way. We built a new LOD system – Level-of-Distance – so you can actually hear weapons over distance and over space […] in a more realistic way than before.” – PL

Halo 2 Anniversary’s recreated audio will be integrated into the graphics switch feature, so that when a player switches between the Anniversary edition and the re-mastered game, he sees and hears the exact game from 2004. 343 then ran a live demo where they switched back and forth between the two games to compare the new sounds of the weapons with the old ones. The new sounds were heavier and popped more, enough to make even Elite Captains shake in their boots.

Map Enhancements through the Eyes of Halo 2’s Lockout

Max Hoberman, who has been a lead on multiplayer design through the series, took the mic to discuss how 343 approached enhancing the preexisting levels – using the Halo 2 map Lockout as his vehicle.

“Lockout is, and I can say this without a shadow of a doubt, one of my favorite small Halo maps […] Lockout’s an interesting map because it’s one of the very first maps we made for Halo 2 […] When we first lay out maps, we had a plan for nine original, kind of small-scale maps […] Actually, Lockout was the smallest of the set and [was the only map Bungie] actually designed, believe it or not, to be a 1-on-1 map.”

“Lockout was a very, very trippy map to make changes on because it’s so popular and there’s just so much that works so well. So we were really, really careful about this, really deliberate. You can see here there are a few improvements, though.” – MH

Hoberman began by pointing out a ramp that curves downward with a 90 degree angle and how his team added more cover space to it. He then showed a familiar piece of glass separating the floor of one level and the ceiling of another level. Though it takes a few grenades, the glass can be broken to send players into a potential deathtrap of a skirmish down below, or it can provide a quick escape from foes firing down from what Hoberman called the “battle rifle tower.”

Hoberman concluded with showing off an environmental enhancement to Lockout -- three giant, icicle-like stalactites. Firing on a stalactite will eventually damage it enough to fall from its holding and crash down on a player. 343 has strategically placed these to fall on the level’s two towers – countering their advantages as long-range combat opportunities – as well as the middle of the map to occasionally amplify chaos.

Following the recount of Lockout’s evolution through its initial design for the original Halo 2, Ayoub mentioned that a series of enhancements have come to Halo’s map-making engine, the Forge. Among the new features and enhancements that will please Forge veterans, 343 is deploying three default map layouts that have modifiable terrain. More features will be announced periodically up until The Master Chief Collection’s release, but one key fan preference has already been fulfilled; saved Forge maps from Halo 3 and Halo 4 will be accessible in The Master Chief Collection.

Ayoub then took us through something many fans have been wondering about: how Halo 3 and Halo 4 look in 1080p and 60 FPS. After a quick demo of Halo 3, I can say that this looked close to being a title developed specifically for new consoles. The dynamic lighting and textures were presented very naturally, so they didn’t look like they were recycled from the original games. Experiencing a campaign playthrough of Halo 3 and 4 in the Master Chief Collection is something fans who purchase the game will want to do.

I can’t contain my excitement for the Master Chief Collection. Not only does it celebrate the Halo universe thoroughly, but it also sets the bar mighty high for what an HD remake should involve. It’s great to see something of this breadth from 343 as we patiently wait one more year – hopefully no longer – for Master Chief’s next adventure in Halo 5 Guardians.