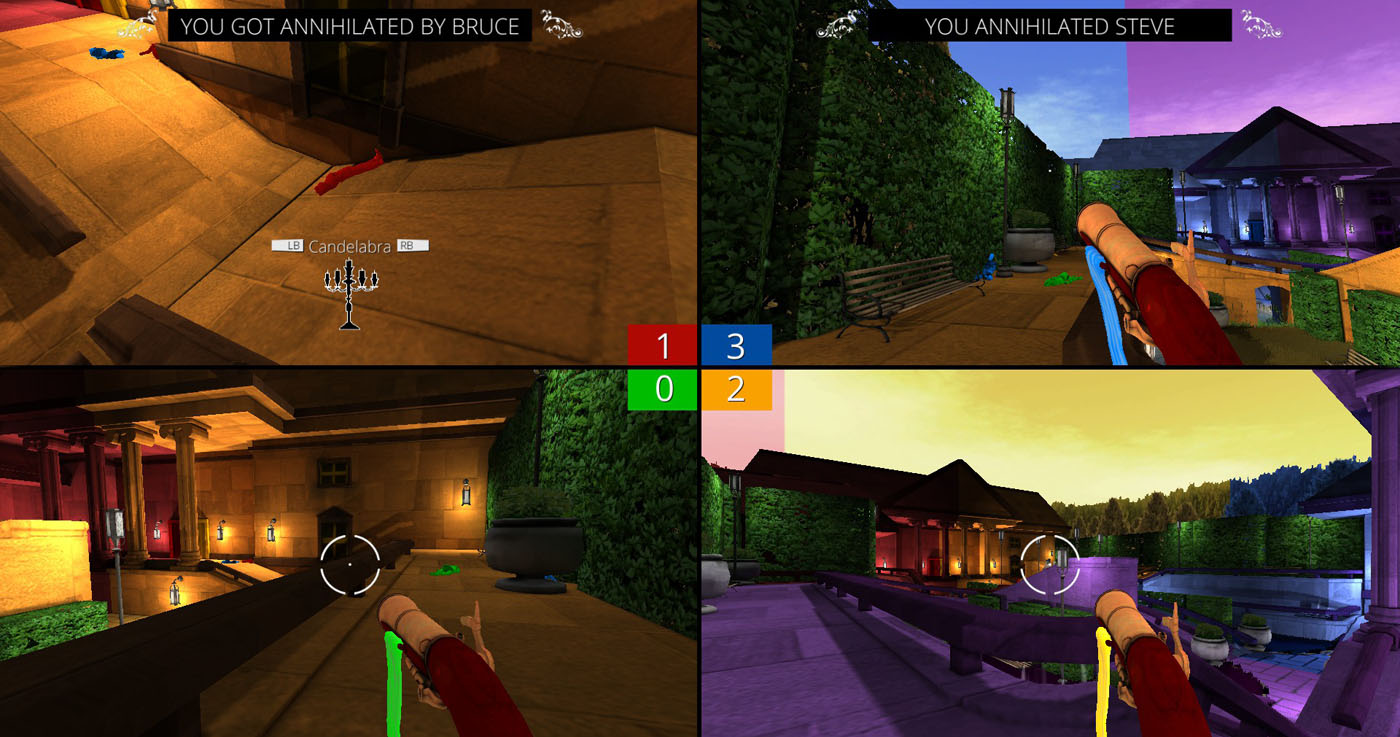 Fortunately, Australian studio Samurai Punk is supporting screen-cheating to the point that it’s essential to screen-cheat in order to be successful. Screen-cheating is so fundamental to this game that the game is called -- you guessed it -- Screencheat.

We got a hands-on preview with Screencheat at PAX Prime, playing against Samurai Punk in true indie fashion.

There really are no “characters” in Screencheat because they’re all invisible to each other. This means that rather than observing a player’s screen and then looking back at one’s own screen to see a third-person representation of the opponent, the player has to spend most of his time looking at the other player’s screen. The core presentation of Screencheat emphasizes visual cues that the player notices from the environment.

The primary cue is the color of the map’s flooring. Parts of the map have flooring with different colors that, on a general level, indicate where an opponent is. Of the game’s three playable levels – which will expand to five upon release – the Museum map has the most basic layout, with four floors each shaded by a different color.

More challenging maps vary how they use color in the flooring, so a player can observe that he and an opponent are standing on white flooring, but they’re actually on different ends of the map. That requires the player to observe more in the environment, including objects like statues, jump pads, and various structures. Players can also survey environment & weapon effects to pin-point enemies. Samurai Punk has thrown in some environmental effects that add some variation to the physics, such as a vent inside the Museum map that sucks players in and spits them out to another point in the map. Fundamental to all maps and modes, Screencheat shows the fire trace from each player, so if a trace whizzes by a player, he’ll likely want to fire against that general direction.

There are currently three modes in Screencheat: One mode is a deathmatch / free-for-all mode, another is King of the Hill mode where the hill moves to random spots on the map, and the last mode is One Shot mode. One Shot particularly stresses the need for screen-cheating because players can only reload their one-shot weapons after all four players have fired their weapon once or if the timer runs out. This mode made me hesitant as to whether or not I should fire my weapon if I thought someone was on the same color-coded flooring as me. Samurai Punk seeks to implement a team deathmatch mode so that players can face off in 2v2 combat.

Screencheat employs a few different weapons, each of which defeats an enemy with one shot, but they all have their differences in range, scope, and effect. Players can use a mid-range blunderbuss to fire directly at their opponents, go with a targeted rifle, shoot a grenade launcher for ricochet tactics, or charge in with a mighty steed…and by that, I mean a hobby horse. There are a few other weapons available, too.

Screencheat offers both local and online multiplayer in the same split-screen layout. The goal is to allow local players to invite friends to an online match. The game will enter beta on Wednesday, September 3. Those who preorder the game now on Steam will have access to the beta throughout its duration, although Samurai Punk will also employ an open beta that people can register for for now.

As someone who grew up loving local FPS multiplayer, I’m excited to see a game like Screencheat do something innovative with my natural tendencies. I just hope that this doesn’t affect how I play other local shooters with people; otherwise, they’ll act like I’m as invisible to them as a character in Samurai Punk’s game.