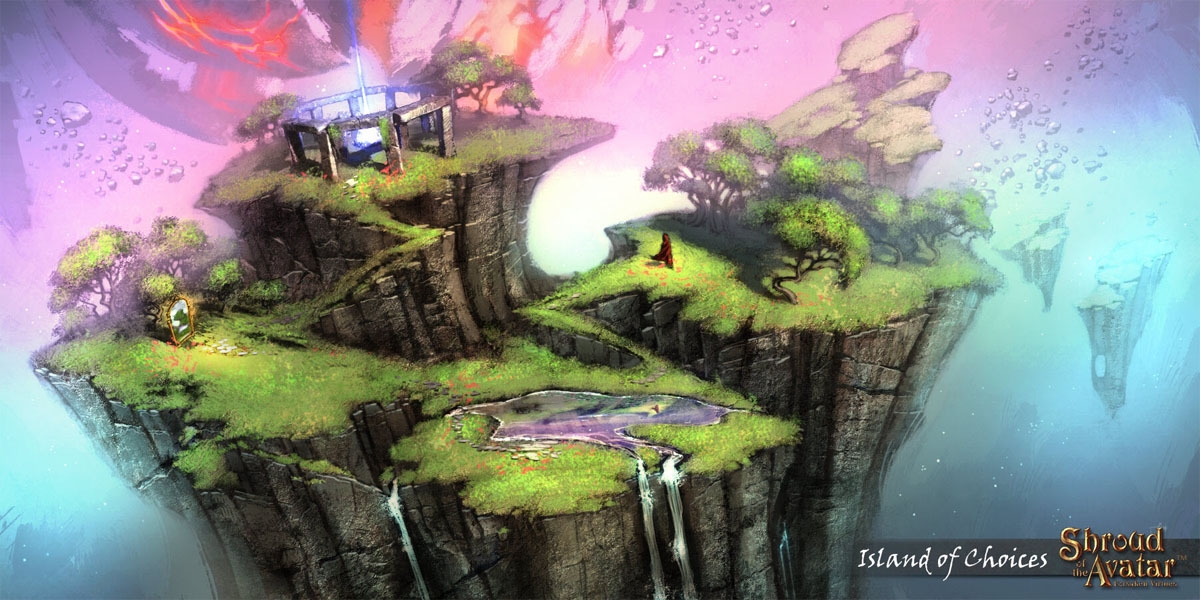 Shroud of the Avatar, even though still in a pre-alpha build, has pulled together a community that seems every bit as passionate as the most rabidly loyal modder communities. This isn't surprising given that Lord British has ruled over his people with a fair and just hand, regardless of what those bitter people on the Serpent Isle claim, since the release of Akalabeth back in 1979. Industry legend Richard Garriott returned to the Fantasy RPG scene around the same time as counterpart space-sim legend Chris Roberts started his campaign, both designers opting to take a crowd-sourced approach to content creation. Garriott's involvement also helps explain why the Kickstarter project funded as well as it did, bringing in upwards of $2 million to the D&D-inspired RPG in the first pass. But to take it a step further, the team at Portalarium wanted to ensure the players truly bought into the game; Portalarium wanted more than the obvious financial buy-in, longing for the more esoteric way of making the game their own.

We got the opportunity to speak with Shroud of the Avatar creators Starr Long and Richard Garriot about community focus and how the community has come together thus far.

Communication is king. The team at Shroud of the Avatar is constantly involved with their backers: They give daily updates -- including meeting minutes -- of progress, publish a schedule of the upcoming intentions for the next 3 months, and release game updates on time every month. Programmers familiar with the AGILE/SCRUM SDLC will recognize its implementation here, just with an added public outreach element.

In addition to talking, Portalarium is also listening.

The team is active in the forums to see what players are thinking, checking if there is any direction that seems to be a hot button. This actually led to an interesting idea from Long: Players kept commenting about wanting to see certain things added to the game, like horse mounts, an elf-playable race, the ability to rearrange building placement on lots, boats, and pack animals, and so forth. Instead of the overarching designer-created stretch goals that most Kickstarter campaigns do, Long had the idea to have players put their money where their mouths were.

The cost of implementing the desired features was figured out and these were released as individual stretch goals with bonus items available for purchase to fill up the stretch goal. This was a unique twist on the stretch goal as it is 100% player-requested content. He did admit that it hasn't worked as well as was hoped, though; after 6 months, not one of the items is even close to funding. Long says he took it as a learning opportunity that even though players say they really want these items, the fact they haven't funded shows that the interest is not there as much as the forums might show. This doesn't mean the features won't be implemented at some point, but it does mean the current focus avoids dilution and dodges becoming feature-heavy at the cost of the quality of the game.

Portalarium has also done something that all modders should take note of -- and all game companies, for that matter. Garriott told us that he was having trouble finding music that he felt would fit the game without massively driving up the costs. He figured one option was to approach the community honestly, like he always has, and voice the concern of investing funding into professionally-recorded music vs. using licensable music. The initial community efforts to help yielded electronica and other music unfitting of an FRPG, leaving the team longing. Garriott politely said it wasn't quite what he was looking for and was going to consider the next option of hiring it out -- that's when the community asked him to clearly state what he was after. The developer took the time to explain in detail the scores he liked in previous games, what he didn't like, and what he was after. The community formed a guild and disappeared for about a month or two. When they next contacted Garriott with their offerings, Lord British was blown away by what was created, to the point that every new track submitted is showing up in the game at some point.

This led to a new vision for them. Not just a player-created economy, mentioned in a forthcoming article, but actually using player created content in the final product. As anyone who has ever used a mod knows, there are talented modders and there are not-so-talented ones. In order to foster talent ones, Portalarium set up a content submission system that can be compared in parts to Valve's. If the content is used, the player has the option of either being paid with real money or getting double the value in store credit. Long mentioned that most of the people are more interested in the store credit, using it as a means to fund a habit. This push is even further supported by Unity tutorials offered on the site to help the community create more content.

A great example of community-created content is Avatar Radio - Radio of the Avatar, which started as just a community webcast broadcasting news, music, and info about the game. They then took it a step further and actually coded an in-game dynamic radio that simulcasts everything, including guild battles as they happen. Garriott even shared how it fits the world perfectly because electricity is already actively utilized in game.

The excitement that Garriot and Long both showed for their community and its involvement is definitely infectious, and I'm hooked on this level of interaction. I think if more games took this approach, we wouldn't have to worry about as many over-hyped games that scream amazing concepts and then utterly fail to deliver on it. Everyone making games out there take note: if you want the potential to last for years upon years, don't forget how to communicate with players and instead follow the example of Portalarium, Inc. by engaging those who want to love your product.