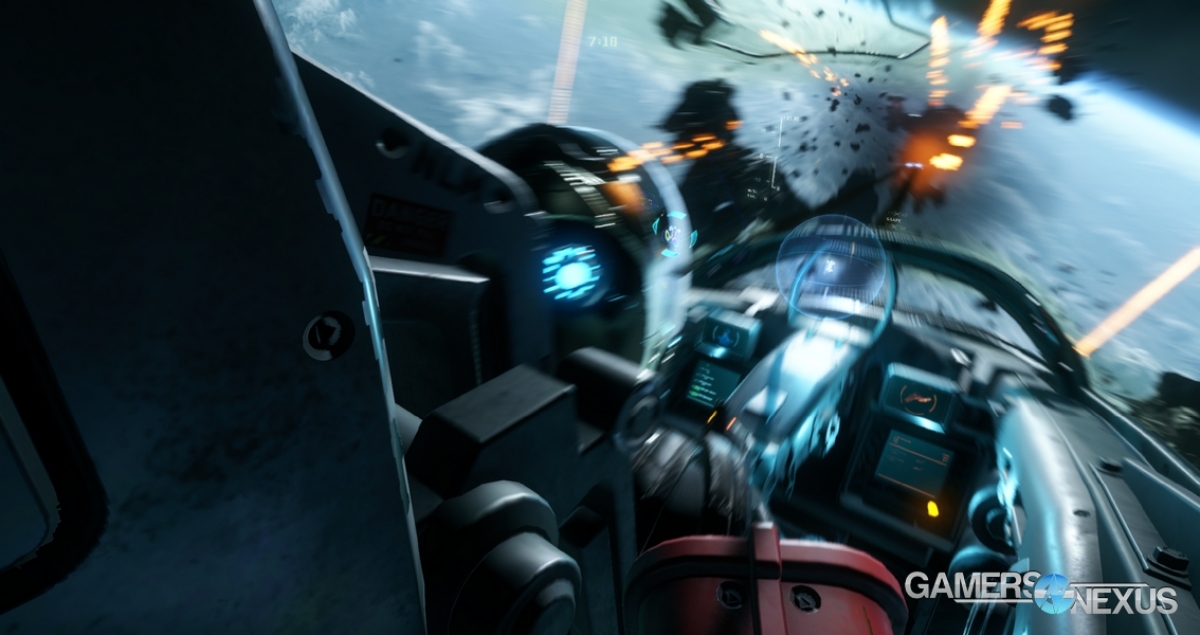 Our video coverage of the entire event can be found below:

Note that we also filmed the entire PAX East 2015 FPS module event and are presently editing, rendering, and processing that video. Our YouTube channel will be updated with that content in short order. We also spoke to Chris Roberts just yesterday about instancing and player count, detailed in a twenty-minute interview here.

The presentation kicked-off about ninety minutes late, but once started, only experienced a few audio issues and no major game-breaking defects. Considering the team’s ill fate at last year’s Boston event, this one went exceedingly smoothly. Still, with each obstacle, the team remains relatively composed and the crowd patiently awaits the presentation’s continuation.

Once rolling, Roberts provided provenance for the in-fiction REC store (rented ships and gear), known as “Electronic Access.” The slide offered a tongue-in-cheek jab: “Electronic Access today is little more than branding for Original Systems’ electronic storefront.” For the unacquainted, Chris Roberts was once a part of industry legend Origin (along with Richard Garriott), who were later acquired by EA Games. If the name “Origin” sounds familiar, it isn’t a mistake – after indirectly causing the demise of Origin, EA has since adapted the name for its Steam competitor.

A small reference was also made to iD software, primarily in the form of an in-fiction Doom-like game, “Star Marine,” as made by interDimension software.

Ship damage models allow sustained damage to impact the visuals of the ship, with ships altering real-time as more shots connect with the hull. Damage used to be displayed in 25% increments, each requiring LODs (levels of detail). More than ten ship components were affected by damage models, each with five damage states and five LODs. In excess of 250 meshes per ship were created to enable greater fidelity with the damage modeling, which presented a unique challenge to the game’s developers: Ships were eating more than 100MB on disk each, a massive amount of data to transmit over network protocol.

Even with the zoning & instancing system we discussed with Roberts, the game still needs to find alternative methods of data compression or means to limit its file sizes.

The new damage model uses unique textures store damage states and can reference shaders for various other visual state changes, including deformation, thickness, temperature, and burn. All of these shaders and rendering approaches are enabled by DirectX11 and soon DX12, moving into OpenGL in the future, Roberts indicated. The ships are precut into breakable sections that incur damage.

The CIG CEO then showed that damage states and burn shaders allow the player to etch their name into the target surface, stating that “I think that would be the ultimate form of tea-bagging and humiliation, etching your name into someone else’s ship.”

Star Citizen’s Retaliator ship is now hangar-ready, with all specs fully revealed. The Retaliator was revealed to ‘oohs’ from the crowd, exhibiting a unique ‘x’ shaped pattern toward the rear of the ship. This is shown in our above video.

Also of note, the team will be refactoring the Constellation and Freelancer to achieve a similar level of detail to the Retaliator.

In collaboration with military advisors and Imaginarium, CIG has redoubled its commitment to accurate FPS mechanics and combat.

Alongside noteworthy fidelity updates to the game’s graphics – including a HUD overhaul – Star Citizen will now accurately reflect real-world reload times and other factors of weapon use.

Character animations have been entirely redone. The CIG team deployed male and female mocap models to accurately animate movement for the FPS module, loosening up the characters substantially and permitting more fluid movement. Some of this is shown in our above video.

Part of this animation rework includes a full muscular and skeletal system for the male and female character models, lending realistic range of motion and natural movements.

A future cover system will also include animations for sliding, vaulting, and taking cover behind surfaces of various heights. Zero Gravity animations will upgraded in the coming months, planned to include animations as player character collide with surfaces, push off, or sulk corners.

Roberts noted that character models will be switched out within a few months, stating “everything in Star Citizen has to be as good [as] or better than anything out there.”

Items & Weapons of the FPS Module

As featured in the video clip at the very end, CIG revealed updated models for various weapons,

Part of CIG’s vision for training is to permit players the convenience of learning mechanics in a relatively risk-free environment. They’d also like to keep things fun, resulting in game modes like ship racing and – as of today – “Astro Arena.”

This arena mode pits players against one another in up to 16v16 “combat,” effectively identical to what’s found in Ender’s Game. “Combat” is really more of just laser pistols and grappling (using a laser to grapple), with the game’s objective being to get into the other team’s end zone.

In the more traditional, Counter-Strike styled mode, players fight in 8v8 rounds on either the UEE or outlaw side.

We’re working on processing and uploading a selected “best of” from our event recording, so subscribe to the YouTube channel to stay tuned for that. We will update this post with the second video once rendered and processed.