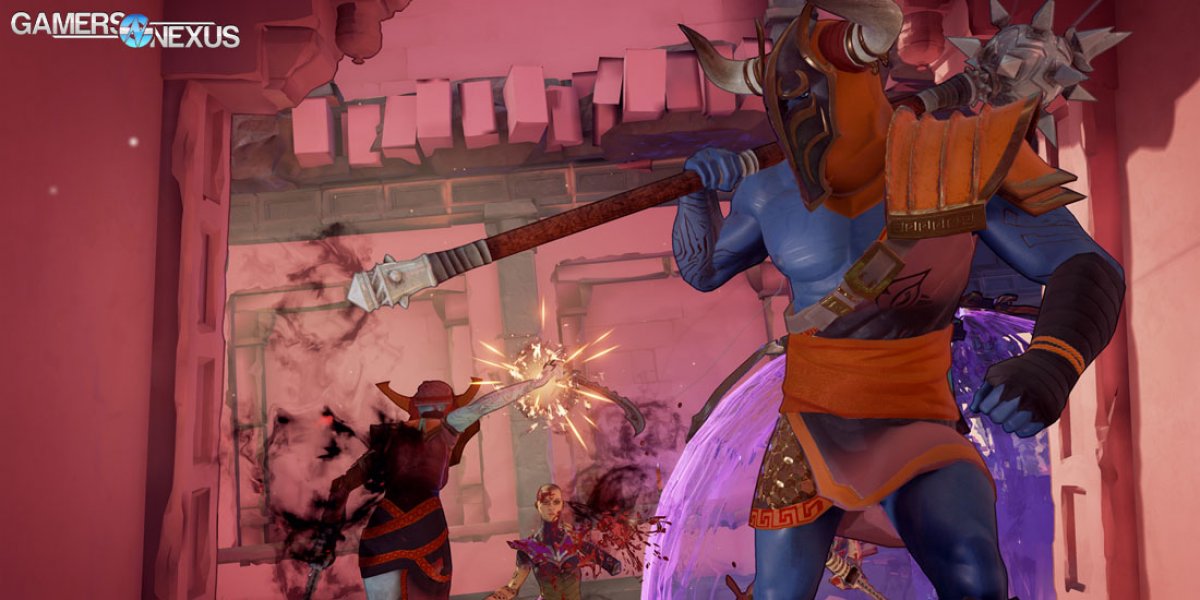 Mirage: Arcane Warfare builds upon mechanics instituted by Torn Banner's critically acclaimed Chivalry: Medieval Warfare, preceded by Source Engine mod Age of Chivalry. The team's humble beginnings were rocketed ever upwards by Valve's placement of Age of Chivalry on the official Steam store – the first of three mods to receive such an accolade. Its peers, Dystopia and Insurgency, have also gone on to establish studios.

Mirage significantly changes the top-level gameplay from what's been experienced in Torn Banner's previous titles, but does so without shaking the foundation. Low-level gameplay elements remain intact with the new title, including swing mechanics (follow-through mouse drags that impact outcome) and the psychology-driven design approach to competitive play. Importantly, Mirage now absolves itself of largely physical combat with a new-found dedication to – go figure – arcane sorcery.

Not too much has changed in the grand scope of the game. Two teams are pitted against one another in semi-competitive fashion, each trying to complete objectives. The game is set within a medieval-fantasy atmosphere with tastefully stylized objects and an active environment. We'll talk more about aesthetics later.

Mechanically, game flow is fairly fast and somewhat resembles the pacing of TF2's Payload (Chivalry, of course, is the best comparison). Except in potential FFA modes (undisclosed), two teams face-off in traditional push and attack/defend manner, with CTF and point-capture also in the plans. Push sees players escorting a bomb (or other object) into the opposing team's base, a mode famously present in – again – TF2 and now Overwatch. The game mode lends itself to “living” level interactions, as choke-points and combat move along with the escorted payload. If it's like previous games with Push modes, the concept encourages a dynamic metagame for each match, generating key turning points for each team. 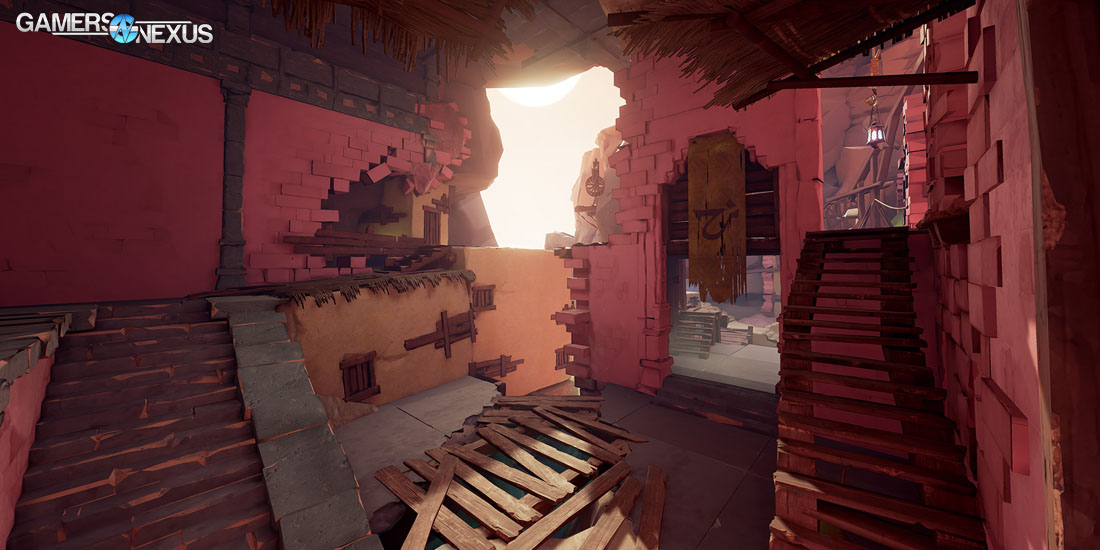 We saw four or five classes in the demo, but there are meant to be six playable character types in the final game. Players are permitted three ability slots per character, with 2-3 options of spell per slot (unfinalized). Each character has means to soft- and hard-counter abilities which other characters possess, ensuring that even “Evacuate” abilities can be countered with a well-placed grappling hook or snare.

The six classes include: 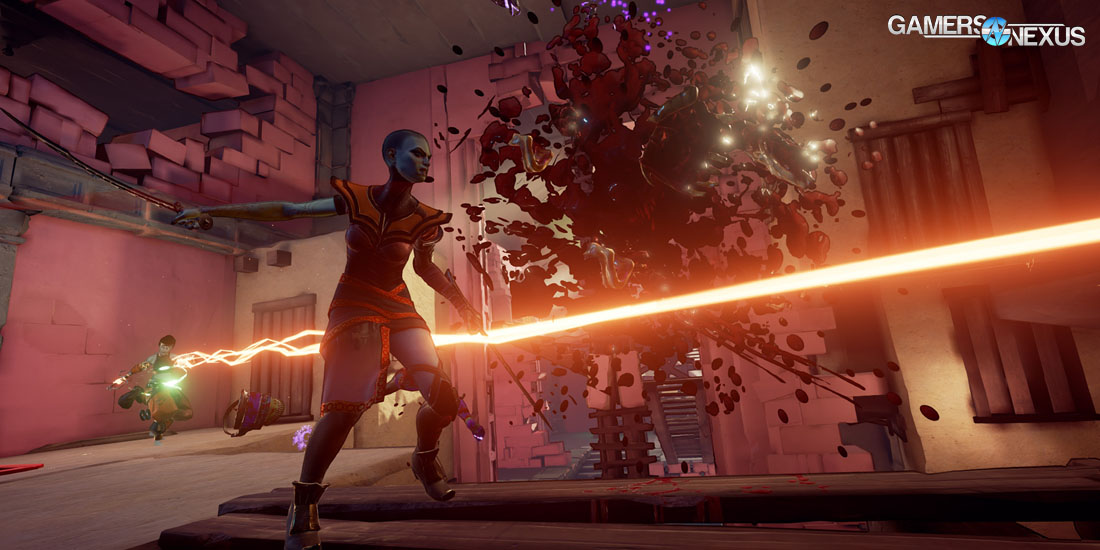 The game is an intersection between Chivalry and magic, with mechanics tuned specifically for “telegraphing” – a design buzz-word that describes, in this case, information conveyance of one user's actions to another. This helps mitigate confusing deaths and reduce frustration of usual FPS gameplay, mostly by creating subtle provisions which reveal impending actions taken by the immediate opponent – a “wind-up” into the pitch, so to speak. Telegraphing is something we discuss in more detail with Steve Piggott and Alex Hayter in the above video.

One of the more critical level design elements is that of verticality, something Epic's been looking at for its Paragon. Levels generally contain at least one level of height difference, creating situations where teleportation or death-from-above attacks can vastly impact the flow of battle. 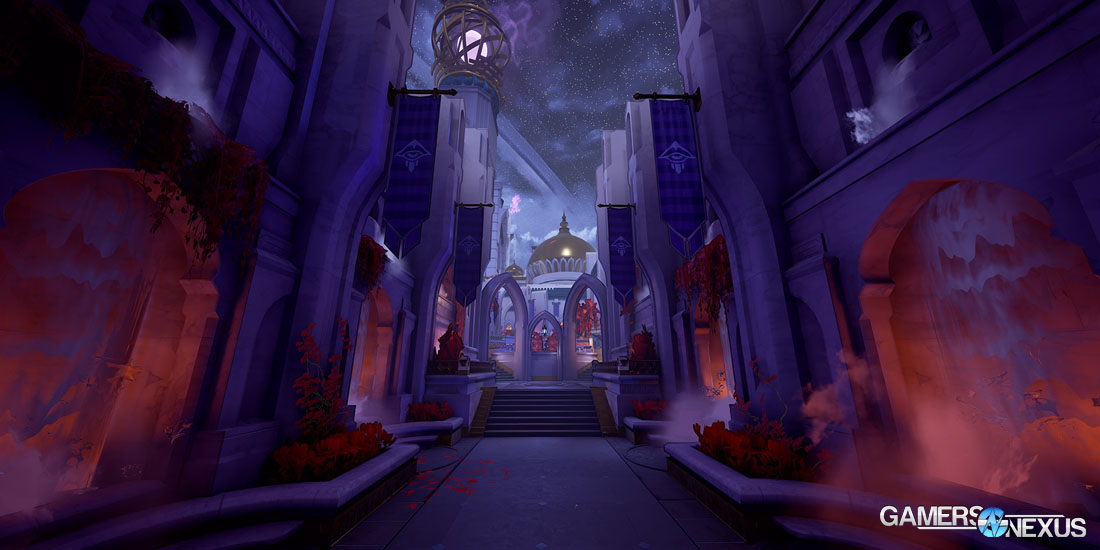 Visually, the game uses both mechanical and artistic cues to create a more engrossing world – sort of like “head canon” for player story-telling. Being on your last legs, for instance, is represented by gaping wounds and profuse loss of blood, resulting in limping characters (who sustain no stat reductions) that are visually nearing their end. The idea here, we were told, is to create this grander picture of a last stand – a player who clung to life long enough for those last few swings, hopefully taking someone down with them. In this respect, we might classify Mirage as a sort-of “casual-competitive” title.

And Mirage makes a strong argument for “aesthetics vs. art,” too. The game has a cohesive design aesthetic with softly-textured surfaces and compatible colors, not edging into “cartoony,” but avoiding “realistic.” The result is a beautifully pulled-together game atmosphere with significant depth, exaggerated by distant landscapes that represent aspects of supporting lore. The story's just there for context, we were told, and the team doesn't plan to “beat players over the head with lore” – but the presence is welcomed and well supported by system resources with UE4 as the engine.

We'll have more coverage of Mirage as PAX East approaches, which promises a playable demo and new mechanical information.

In the very least, we'll say that Torn Banner was among the most competent game development interviews we experienced at GDC. The team clearly has confidence in the product and executed its demonstration masterfully, something that can't be said of all these meetings.