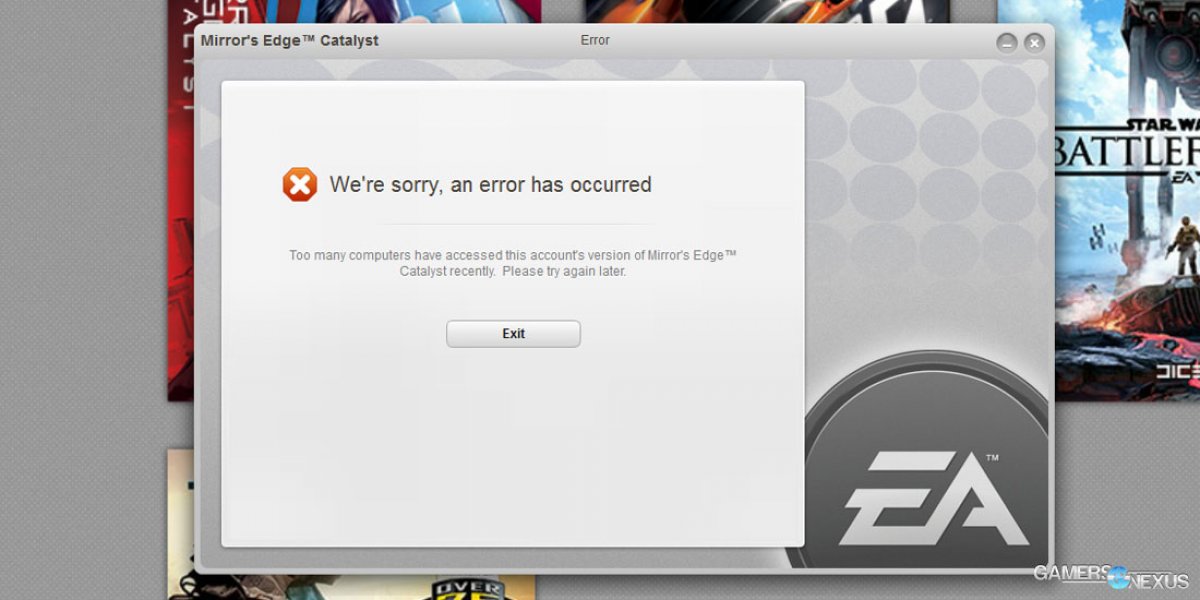 Even on the media side, we have no easy way around this. We've already bought the game once – not a press code, but paid access – and will likely be buying it one or two more times for benchmark purposes. That's fine for us, but it's not so great for actual players. If you buy the game today, decide you don't like performance and upgrade the GPU, that's two activations. If you swap the CPU next year – or just install a new board/CPU platform altogether – that's the third activation. One more hardware change, that's it. Buy the game again.

This is an old hymn that we're familiar with in PC gaming – DRM is often draconian and overreaching, and could lock-out legitimate consumers (as with our own copy). Four activations sounds like plenty in some ways – no real-world user will switch cards every few minutes – but the fact of the matter is that down-the-road playability is killed by this DRM. This is especially noteworthy for Mirror's Edge as a single-player-driven game; there's a good chance I'll want to play again in a few years, as I've recently done with the original title, and hardware will definitely change by then.

We're starting to get a little frustrated with EA over this brazen assault on the PC enthusiast culture. The intentions are legitimate: EA hopes to prevent piracy, or something, by attacking its consumers – that's normal. Not great, but normal. We can work with that to some extent. Unfortunately, because EA sees everything as a new computer, the limitations are far more severe than totally new system installations. It'd be reasonable to mark a platform upgrade – a new CPU & motherboard, maybe a new OS – as a new computer. Moving from one video card to the next does not, however, constitute a new computer. We haven't tested if a new OS install (e.g. a re-install after virus infection, which is common) also drains an activation.

Either way, just know going into Mirror's Edge Catalyst that it is outfitted with the same DRM as Battlefront.

The game looks good – we'll review it soon-ish, after our GPU benchmark – but it's just sort of got this unnecessarily irritating leach hanging off of it.

(One note, as an edited add-on: EA Origin still has some of the best customer support when compared against some competitors, like Steam -- this particular issue is just a meandered mess to get resolved. Customer service doesn't seem to understand it, and so it's always easier to re-buy the game.)