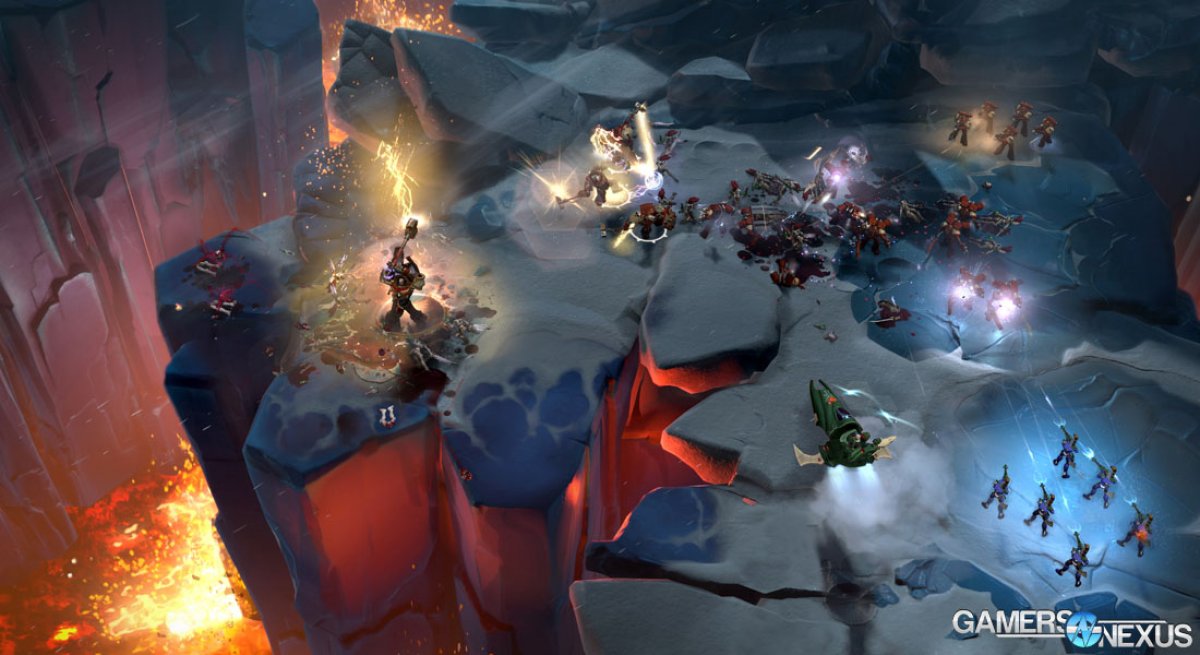 Dawn of War III's presence at PAX West 2016 made for the first hands-on gameplay opportunity available to the public. The game is true to the RTS genre, but mixes and matches components from the first two titles to make more of a “core” RTS game. This time around, Dawn of War III has added base building back in, meshing with a push for large army sizes and a battlefield littered with Hero and Super units alike.

Dawn of War III is a Relic game. Aspects of gameplay are distantly familiar to Company of Heroes, but Dawn of War's third iteration has distanced itself enough (while running on the Essence engine) to feel mostly unique in its mechanics. For our hands-on demo, we played as the Space Marines (Blood Ravens, sub-faction of Blood Angels) in a late-game campaign mission with access to hero Gabriel Angelos and Super Unit Titan (piloted by Lady Solaria).

The PAX demo allowed play of the Space Marines versus the Eldar, but we know that the Orks are a confirmed third faction. Additional factions are pending announcement, but will be included in the game either through future DLC or in the initial launch. 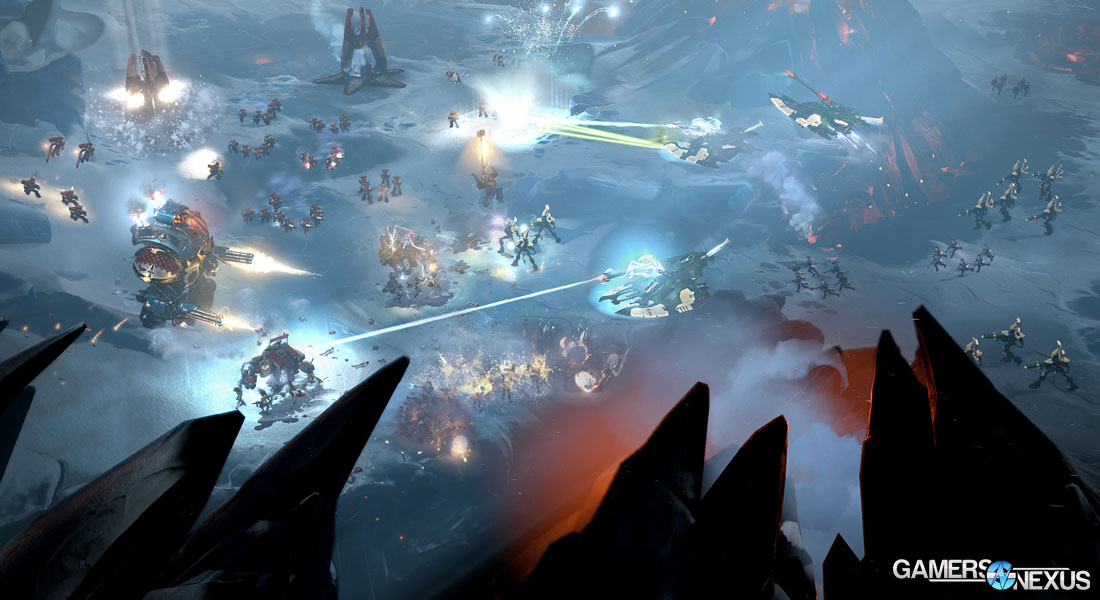 Macro mechanics are largely focused on splitting player attention between base building and resource management, with army management serving as the usual micro element. Base construction features infantry buildings, heavy/mech unit buildings, technology buildings, and economy/production buildings. Resources are represented as Resource Points on the map, and can be captured to expand a player's map control and income simultaneously. Workers can then construct towers (to strengthen defense against harasses) and add-ons to increase resource point production of either Requisition or Energy. 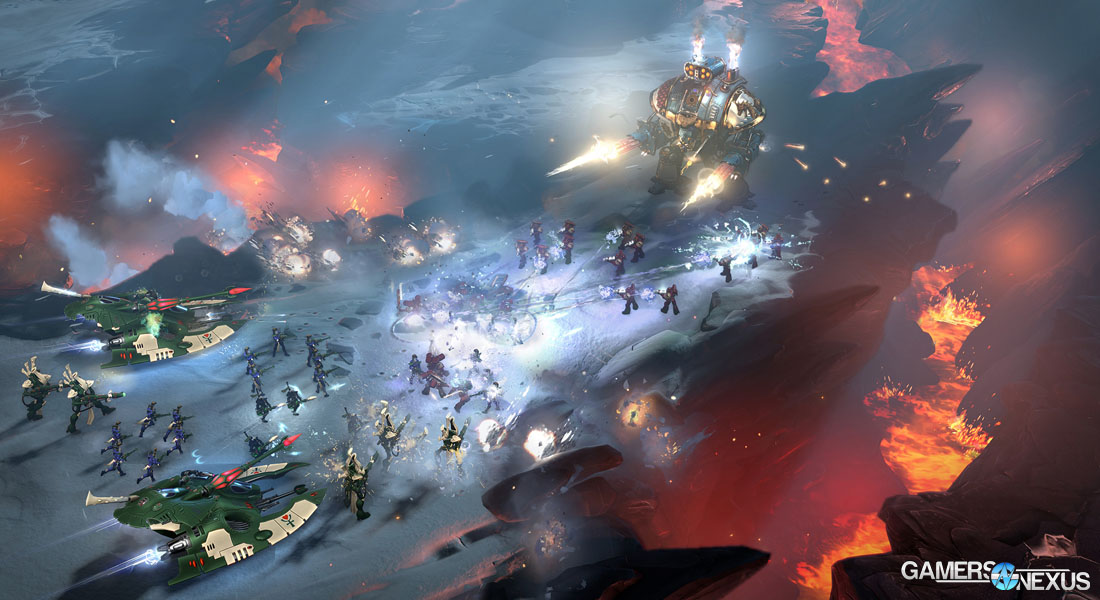 "We're going back to what was best and most loved with Dawn of War I and Dawn of War II. […] In one part, we're bringing back the base building from DoW I, which was loved and awesome, but we're also bringing back the heroes from Dawn of War II. […] Resources are the ones players have known from our previous iterations of the game. We have Requisition, which is focused on infantry, and Power, which is more focused on enabling you to get tanks, dreadnoughts out, et cetera. The other resource is what we call Elite Points, and it's what allows you to unlock units and drop them into the field."

Unlike Requisition and Power, Elite Points are earned over time. A point is awarded every 120 seconds, which can later be redeemed for larger power plays in the match. 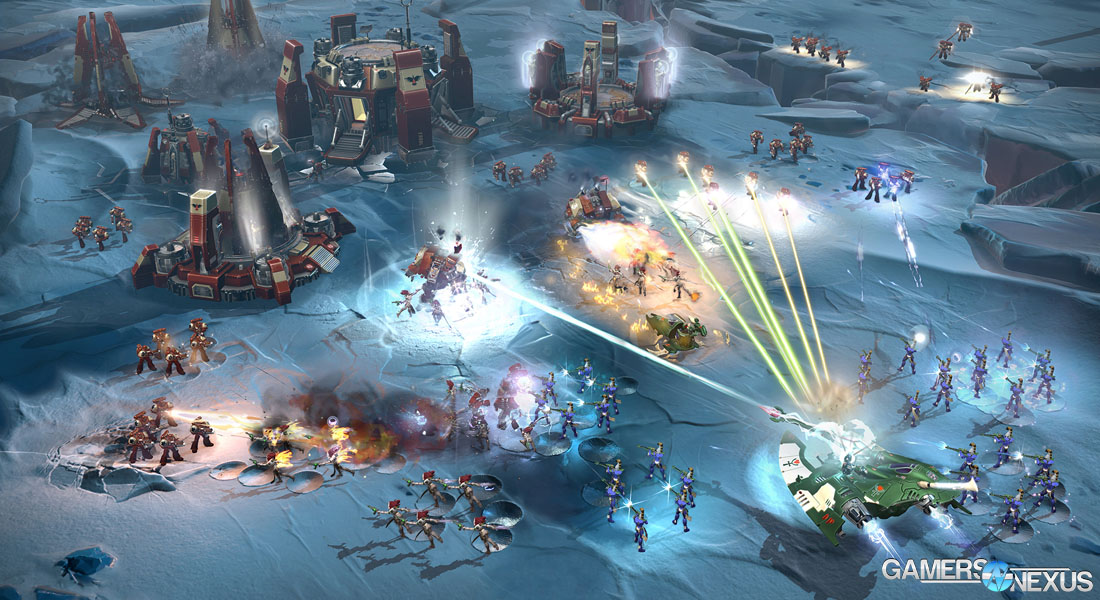 Speaking specifically to the aforementioned drops, the Space Marines have a drop pods faction ability (“Death From Above”) that allows rapid deployment of units to the field. DFA can be used anywhere on the map, and issues a knockback to units in the surrounding area. A maximum of three drop pods (at higher tiers) can be unlocked for use, instantly creating unique gameplay interactions and responses to map control. We're excited to see how these unfold in multiplayer, and what the Eldar and Orks have in response.

"The Space Marine's super ability is called Orbital Bombardment. It's basically a beam of death that comes from the ships that are monitoring the battle from above, and they burn everything."

"What we want you to do is basically build a massive army, and mix it in with the heroes that we're giving you -- like Gabriel Angelos. Resources are there for you to craft a strategy of whether you want a more infantry-focused army or a more mechanical one, with lots of artillery, dreadnaughts, et cetera. Heroes are there to basically synergize with your army the way that you build it and use their awesome abilities to kick some ass."

Critically, unlike many RTS games in the space, Dawn of War III will ship with a campaign that switches players between all three factions throughout story progression. Relic thinks that this approach will assist in creating greater faction diversity during multiplayer – hopefully splitting evenly between the Space Marines, Eldar, and Orks – by getting players comfortable with each race in singleplayer. With a campaign entirely focused on the Space Marines, there'd likely be a heavier split favoring that faction in multiplayer purely as the product of player familiarity.

The campaign will be a “healthy length,” from what Relic told us, though we're not yet sure just how long the game intends to run its singleplayer.

Multiplayer hasn't yet been discussed at any level, nor has any mode outside of the DoW III campaign. With a release date vaguely set for “2017,” we'll be covering this game a few more times in the future – check back for that.

So far, gameplay mechanics are intuitive and feel "right" for an RTS. This isn't another MOBA -- we've grown sick of every game being labeled as a "MOBA," at GN, quite honestly -- it's a true-to-roots RTS. This is one that we're genuinely excited to see develop for its strategy mechanics, and will stay on top of coverage through release.