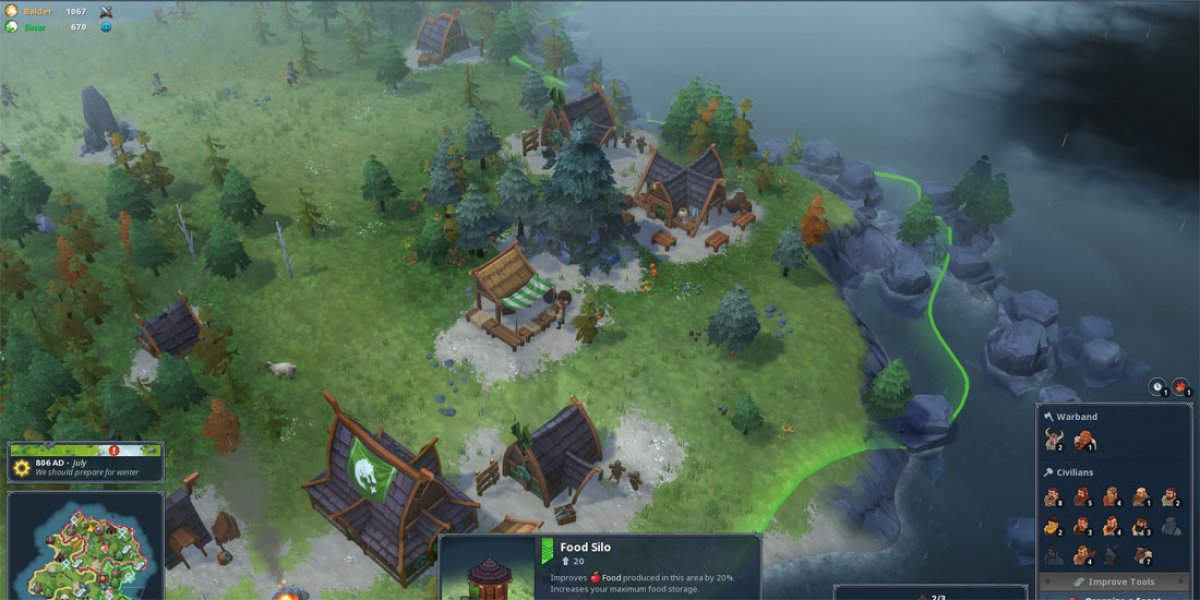 The map is divided into nearly equal sections, with us holding one to start. Our first order of business is scouting to find expansion options, which can be done by building a scout hut and assigning a villager to that hut. Capturing a section with a scout or warrior allows you to build in that region or to capture a natural resource available there, eventually used to upgrade each building (all buildings have one upgrade option; the town center’s upgrade is comparable to aging up in AOE). This also increases fame, which is the measuring stick of all the factions in a game of Northgard. The more area each faction controls and the greater its military achievements, the higher fame rises. This solidifies bonuses and victory pathways. 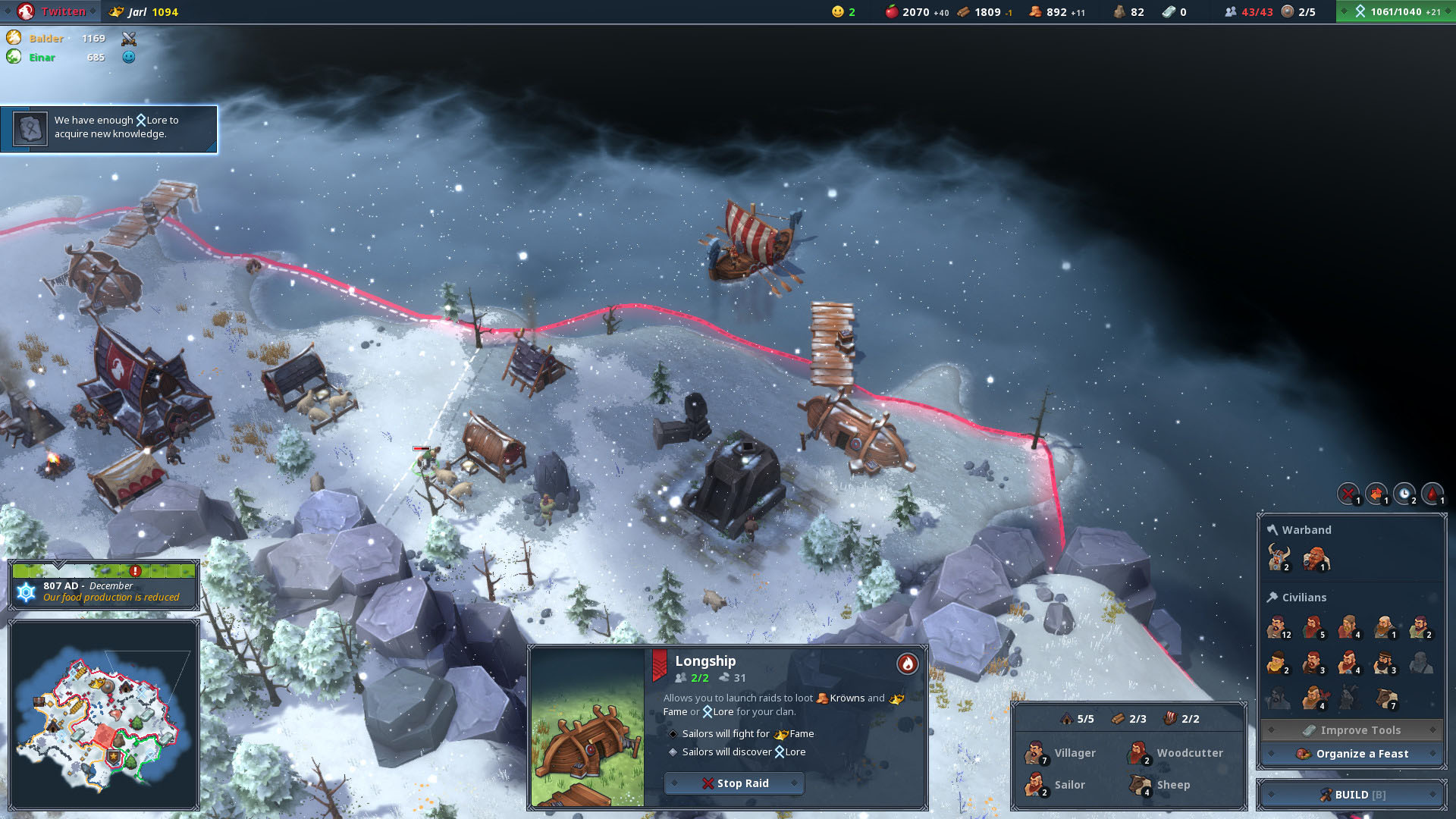 In Northgard, villagers are acquired automatically on a timer rather than trained/built, as long as the population limit hasn’t been hit. Villagers gather food automatically when not given a task, but buildings can be established to upgrade villagers into specific professions. This includes hunters, brewers, warriors, smiths, fishers, woodcutters, stone miners, healers, and so on. While in territory we control, trained villagers do the work of their profession automatically, just like those without a profession. For instance, healers will heal damaged units automatically while the healer and the damaged unit are in a controlled area (although the early access demo we played seemed to have a healing bug).

Shiro Games designed Northgard to disincentivize micro play. This is why so many units in Northgard behave automatically based on their profession, and was a slightly divisive feature for us at GamersNexus: we were split between the frustration of not having direct control over our units versus the simplicity of our units working without having to be directly told to (but because Steve isn’t writing this article, the simplicity side wins). What we did agree on, however, was that the AI in Northgard is in need of some work. We had trouble getting units to engage enemies in a way that felt intelligent, particularly when trying to get healers to provide back-up when defending an assault. The APM-side of our skillset is largely useless here, and we’re left waiting for units to respond appropriately. 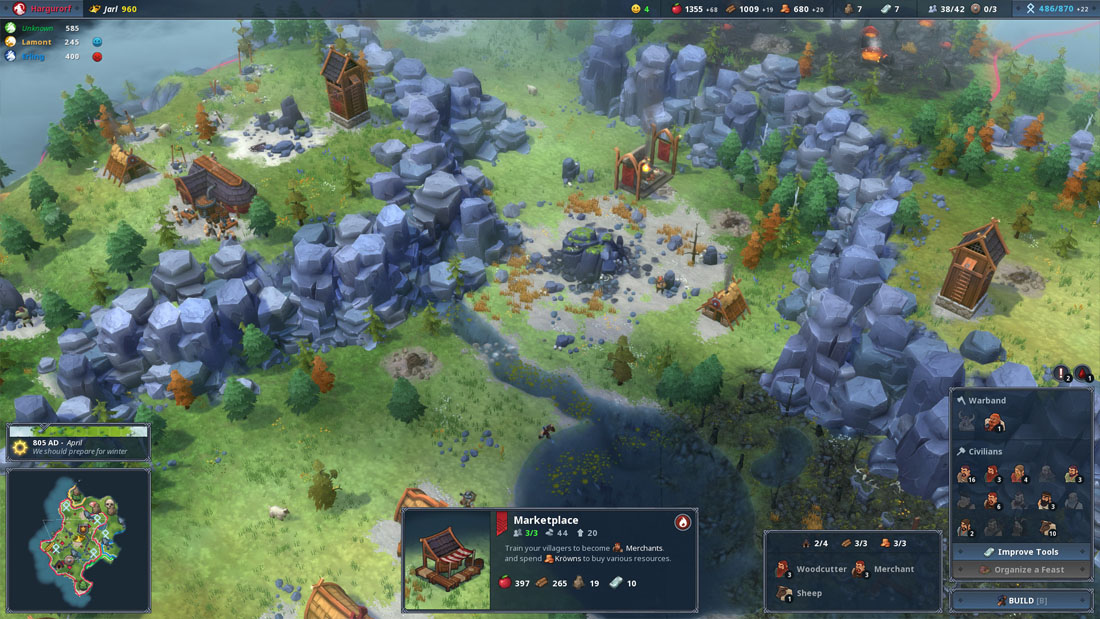 When looking at these problems, it is important to remember that Northgard is still in early access and they are mostly technical issues, so it's likely they will be fixed by full release. Going into early access, these technical issues don't seem to be hurting Northgard thus far. After entering early access on February 24th, it managed to take the number one spot on Steam’s top seller list on the 25th.

As for gameplay on the whole, things feel good for a Settlers-inspired strategy game. The strategy market has stagnated heavily in recent years, particularly when compared to the late 90s and early 00s. We once had games like Poseidon, Caesar, Age of Empires, StarCraft, Warcraft, Empire Earth, and innumerable other RTS/grand campaign games simultaneously existing. Today, fans of the genre -- including GN staff -- have been left without much to choose from. Northgard has the right ingredients for a good strategy game. Once multiplayer gets added, we’ll be revisiting this title for more in-depth gameplay analysis.

Northgard is currently available in Early Access on Steam for $20. Shiro Games has yet to detail full release information for Northgard. Currently there is no multi-player features in the game, but we've been told that it's on the horizon. Stay tuned to GamersNexus for more on Northgard and more PC game news.