Locked threads were stamped with an axiomatic copy/paste response (above), stating only: "Spam. End of line." It is likely that Woo's allegations of spam can be attributed to the dozens of other 'player reviews' within the forums (thus appearing to be duplicates), however, positive posts have -- by-and-large -- remained unlocked by moderators. A thread entitled "Bioware, I'm Sorry. I like this game," which remained unlocked, praised the game's cinematic execution and, in essence, reviewed the title from a non-press perspective; meanwhile, a post titled "Why I humbly believe Dragon Age 2 isn't very good" was locked within the span of a few hours for "spam," despite the author's pleas to permit constructive discussion among peers.

Not unlike the time when Infinity Ward mysteriously lost data to critical threads, the actions of moderators suggest that Bioware doesn't tolerate the negativity surrounding some of the controversial decisions implemented for the latest game.

We attempted to investigate the Terms of Service upon registration, but were presented with an "error loading content" message. However, upon checking the 'Rules of Conduct,' Bioware defines spam as follows:

"1. No Spam. Spamming can be defined as posting multiple times about the same thing, starting multiple topics about the same thing, posting off-topic posts in other people’s discussion threads or topics, or providing links that have nothing to do with the forum, topic or subject at hand. Spam will be deleted without warning. What constitutes Spam is up to the discretion of staff and moderators. A person or persons found to deliberately or repeatedly post Spam or Spam others may be banned from these forums at the discretion of the staff."

Within its own rules, all posts 'reviewing' Dragon Age 2 -- both good and bad -- should be locked and merged into the primary User Reviews thread; unfortunately, it would appear that the negative reviews have been entombed within the pruning pages of the forums forever. Bioware, the very least you could do is explain the reason for locking the thread to your users, and thereafter, merge their thread with the above linked User Reviews thread. 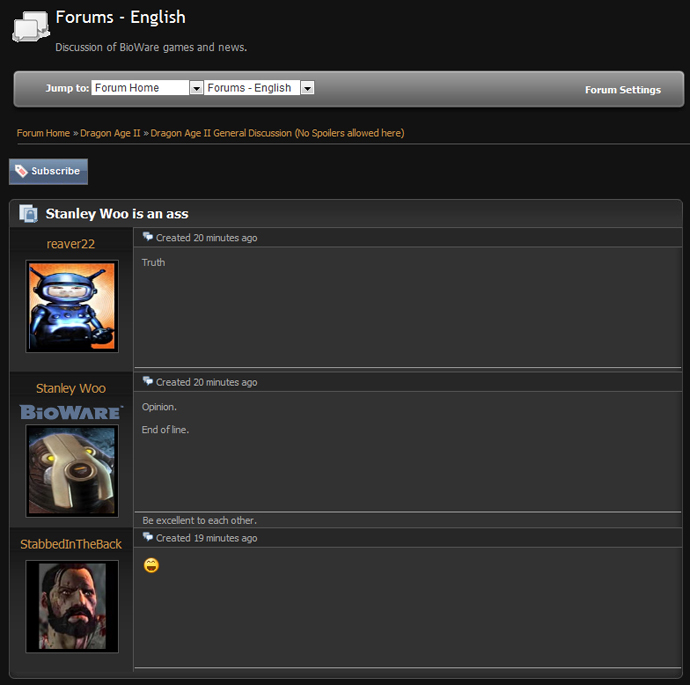 In a post of his own, Woo stated his reasoning for locking negative posts: "There are those who believe that prefacing their posts with 'this is not a troll post' and 'this is constructive criticism' automatically makes it true." He's right, but positive comments are not necessarily inherent truths - no matter how pleasing they seem. Woo further stated, "don't want to see so many threads get locked? [...] be excellent to each other. That means no platform wars, no name-calling, no sarcastic spam remarks, and post constructively so people are more inclined to respond in kind." This is the Internet, and as in Sparta, trolls should be dealt with individually through employ of historically-inaccurate bottomless pits. Locking an entire thread that follows the rules because of one angry fanboy just isn't nice. The mantra of a relative comes to mind: "throw me in the pool, throw all my clothes in the pool!"

What do you think? Is the reaction acceptable, or should there be more explanation behind it? Is Bioware treating its forum members fairly? Respond in the comments below. I'll delete your post if it's negative.