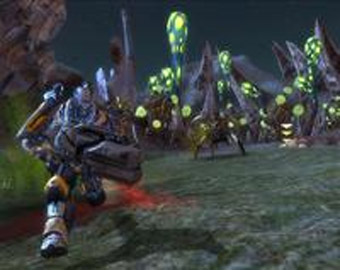 Asteroids, galactic destroys of intergalactic peace, have once again returned.  Just like in Asteroids (the game), Nicholas Cage, Megan Fox, Sean Connery, and Megan Fox have been called forth to man an A-shaped ship into the orbits.  What will be left of earth if they fail?  Better yet, how did they manage to do donuts in that ship?  You'll see what I mean.  Credit to the team at Bad Joystick.

Oh, and sorry about the first 30 seconds or so - it gets better, promise.

Someone please teach me how to do donuts in an A?!
Read more...

After seeing the multiplayer teaser for Modern Warfare 2, GN took a closer look at all of the elements in the trailer, then analyzed them for your drooling!  So get pumped for the new factions, weapons, and achievements that we have unveiled!

You can read some of our notes from the video below, just in case that wasn't enough:

"Be the gunner of an AC130" - Players are able to actually aim their kill streak bonus
Unlock the AC130 by achieving an 11 kill streak
Play as the rangers, marines (?), opposing forces, or... the soviets?!
At 0:25, there is a chopper in the background that is undamaged.  Is it possible to fly these?
At 0:35, the mini-map/radar is fuzzed out.  Possibly a new radar jammer?
At 0:36, it is apparent that some new guns have functional radars attached.
An AT4 rocket lawn chair has been added, with the ability to lock-on to vehicles (0:39)
Immediately after this, the Helicopter/Gun Ship releases flares to negate the missile.
At 0:47, it is obvious that a player in the server is in a helicopter or plane
-this vehicle has thermal vision and two different weapons.
Semtex plastic explosives added (1:17)

A compass has been added to the bottom right corner
In the bottom right, next to the radar, you can see which kill streak items you have - UAVs, Air Strikes, etc.
Achievements unlocked while in the game now have a description of what that achievement was for while in game.
The bottom left now cycles through winning/losing and game mode

Buzzkill has been added.  "Stopped enemy short of a killstreak. (+100)"
As seen with our buddy FOURZEROTWO (the IW blogger), Stuck "You stuck an enemy with Semtex!"
Payback! "You've taken revenge (+200)"

BioWare just released a new Star Wars: The Old Republic video. This game is starting to look like it could be really good, if they manage to pull it off. Check out the video below:

We'd like to hear from you about what game should be given away next month!  Please post in the forums with your ideas.  It must be a game.

Free Realms - A Little Too Free?

StarCraft 2: No Life for Aiur?