Bethblog announced a new Skyrim live action trailer today for those of you who can't get enough of Skyrim. If you haven't already seen it, the Skyrim map is already live and we're currently waiting for system requirements. View the live action trailer below: 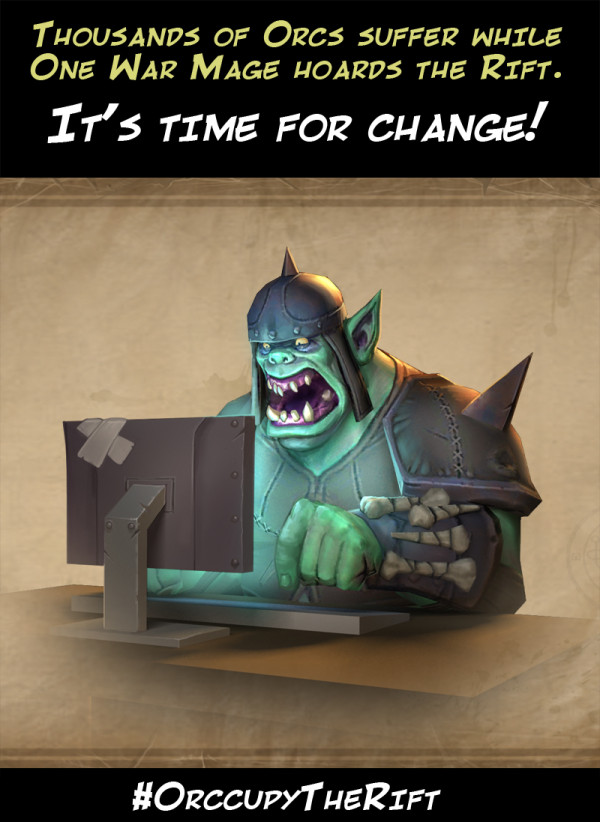 BREAKING - In a stunning change of events, Orcs (shown here) have pitched tents on Rift Street and are demanding a change in the precariously balanced system of the monetization of magic. Orccupiers have demanded a separation of magic and castles, claiming that the union between the two has yielded unfair turnout in warmage elections; when asked why this bothered one Orc, he stated:

"We never vote fer warmages, we vote for Orug-Gormak, Spewer of Vomit. Orug-Gormak say he pull us out of war, say he do social reform to make so vomiting in public are encourage! Warmages is dumb, warmages is owned by big magic in government."

Orccupy the Rift is a movement that started out on Twitter, as with many modern rebellions, and is spreading rapidly to other networking websites. While it is uncertain whether or not Orcs know how to use computers, one thing is known: Orcs are dying en masse thanks to the recently-elected warmages; supporters of the Orc party have often referred to a previous warmage, known only as "old man," stating that we should have never impeached him.

The campaign slogan of the Orcuppy Movement has been constant-yet-confusing: "Orcs are the ??%" (it's hard to read Orcish handwriting, we believe they are upside-down '9s').
Read more...

Our recently-posted $550 budget gaming PC and $1795 BF3-themed rig have both prompted support requests on our forums for building an in-between system -- that's what this one accomplishes. If you're in the "heavy wallet, but not quite burning a hole in my pants" stage of the game, this ~$900 build will suit you beautifully for many, many years of gaming on high or ultra graphics settings.

This system addresses all the same concerns as our previous hardcore gaming rig did, with the exception that -- you know -- it's new and shiny. That one is nearly two months old now! Yuck! The system build list below includes all of the greatest parts currently available for the sub-$1000 range (you could probably tack on this Antec 900 v2 case if you have extra money, or even a different video card), but for our price, this machine is nothing short of monstrous. Let's break-down the list below:

Seriously, you guys suck. Look at those stats! If anything proves that an entire clip is needed to kill someone in Battlefield 3, it's the fact that the average kill required 31.3 bullets.

The EA Gun Club released some playful stats for Battlefield 3 in wake of the new trailer, including the longest headshot ever recorded, the number of people that tried the beta, and kill stats. Enjoy below!

For those that follow the United States' particular interest in middle-eastern conflicts, the Battlefield 3 trailer is successful in advertising its singleplayer campaign as more than just an after-thought to multiplayer: the trailer is moving, hits close to home, and feels like something you would see on an urgent news report. It feels more personal than any other game trailer ever has, and I can only hope that the game delivers as the trailer promises; it is on more equal ground with movie trailers than other video game teasers, I'd say. The original Call of Duty 4: Modern Warfare singleplayer was similar, but I have a feeling this will be even more evocative and timely; DICE is capitalizing on an increasingly angsty population of global citizens.

If you saw our recent post about BF3's major multiplayer maps (not including the additional map pack of BF2 maps), you're probably as excited about the game as we are. For those who aren't sure yet, or those who have been serious fans of the series since the beginning, it's time to take that tranquilizer shot -- we won't be responsible for you dying of excitement.

If our Battlefield 3 Caspian Border squad gameplay video didn't tip you off, DICE's latest addition to the world of FPS games will do what shooters inarguably do best: advance the front of graphics technology to yield the most realistic visuals yet seen. We've already provided a convenient chart of graphics card compatibility (cross-referenced with graphics levels) for Battlefield 3, so it's no secret that you could run max settings on a GTX 570 -- however, this PC goes beyond playing the game on max: it's specifically built to resemble something we think you'd find on the battlefield. Of course, if this system's a bit out of your budget, try our wildly-popular $550 budget gaming build.

This system is futuristic-looking, has a rifle magazine on the motherboard, and utilizes not one, but two video cards that are colored in a killer gun-metal gray design. Besides, it'll last you several years on maximum settings before you even need to think about an upgrade (and believe us, this motherboard will certainly allow for a number of upgrades before it is inevitably retired).

Let's get started with the parts list; we're putting the motherboard first this time purely because of its cool factor.

DICE recently announced five of the maps (out of nine total) that will be included in the full release of Battlefield 3. For those of you who were not around for the beta, the two main maps that were playable were Caspian Border (which was a conquest type map) and Operation Metro (which was the new game type, rush). Both had their own unique aspects: Caspian Border gave us a preview of the vehicle gameplay and also provided with a huge map, giving the game a true “battlefield” sensation, while Operation Metro was more of a pure FPS type map since there were no vehicles included; however, it did require more cooperation on the part of your team in order to complete the different objectives. 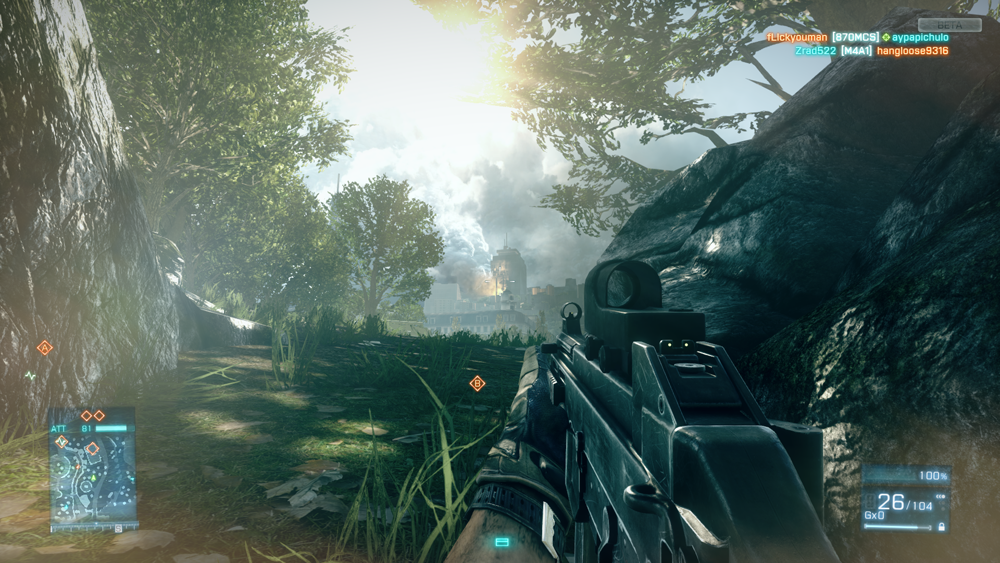 "Infinite" is a strong word for anything running on a computer or console -- we have hardware and software limitations that require massive teams of talented programmers to bypass; however, programmer Jorge "Vino" Rodriguez (creator of Digitanks) has offered a solution to the problem of rendering varying depths of numerous objects (in his example, moving an ant around on a planet that orbits a distant star) with minimal negative side-effects.

The project is called 'Codename: Infinite,' and is currently aiming to enable an 'infinite universe' that allows seamless transition between planetary surfaces, the atmosphere, and outer space.

We've posted up our video review of the awesome Orcs Must Die! tower defense/hack 'n' slash by Robot Entertainment! Check out the review with awesome footage of gameplay below, as well as (what we think are) some of the most hilarious trap combos used thus far in OMD!

Orcs Must Die! Released Ahead of Schedule