PAX East is here! Well, basically. Close enough. I'm counting the hours til I'm awoken rudely by several intentionally-obnoxious alarm clocks (it's 14 hours, by the way), at which point the team will regroup and embark on our journey to Boston for the show.

The event runs from Friday to Sunday (March 22 - March 24) this weekend.

For the uninitiated, PAX is the Penny Arcade Expo (hosted by the webcomic, Penny Arcade), for which more info can be found here. PAX East is one of the largest gaming conventions in the world, with more than 70,000 attendees per show annually; there are two shows per year, each about the same size -- one in Seattle ("PAX Prime") and one in Boston ("PAX East"). PAX East is always hosted in the March/April timeframe at the Boston Convention Center, Prime is hosted in the August/September timeframe in Seattle's primary convention center.

PAX East is dedicated entirely to the consumer, so unlike CES and E3, "normal" attendees can visit and enjoy the show without need for industry credentials. And we highly encourage it, too! PAX East's contents this year are distributed relatively evenly between video games, tabletop games, and gaming culture (with the hardware sector making a showing, too); the show is best described as a "celebration of gaming culture," really, as it intends to facilitate the coming-together of gamers worldwide, showcase new content from vendors who pay for booth space, and generally ensure everyone just has fun for a weekend.

And even on our side of the convention -- which often involves 20 hour work days and agonizing foot/back pain -- the event is oddly addicting, leaving a lingering feeling of separation anxiety when it all concludes.

Well, we're back this year. I'll be joined by Hardware Editor Patrick Stone and Staff Writer Nick Pinkerton for the event, with contributing support from Mitch DeBardelaben. Our schedule's pretty damn packed—almost intimidatingly so—but looks fun. I still can't share some of the specifics of what we're talking about, but I can absolutely share who we'll be talking to:

The above table is broken-down into vendors & the reporters we're sending. Some content will be written live, some will be written post-event. You can view Penny Arcade's official schedule here and their official map/vendor list here.

We'll have news from all of these companies and more, with a bit heavier focus on the gaming side of the event than you all might be used to. Hardware will be heavily explored, as always, but much of that news has already been broken in the lead-up to the show (CES wasn't long ago). Things are much less formal at PAX in large part due to the consumer focus (something we really agree with and enjoy), so the articles will be a bit more loose and entertaining. We'll follow up with technical specifications whenever possible, but sometimes the right people simply aren't present for this type of show. 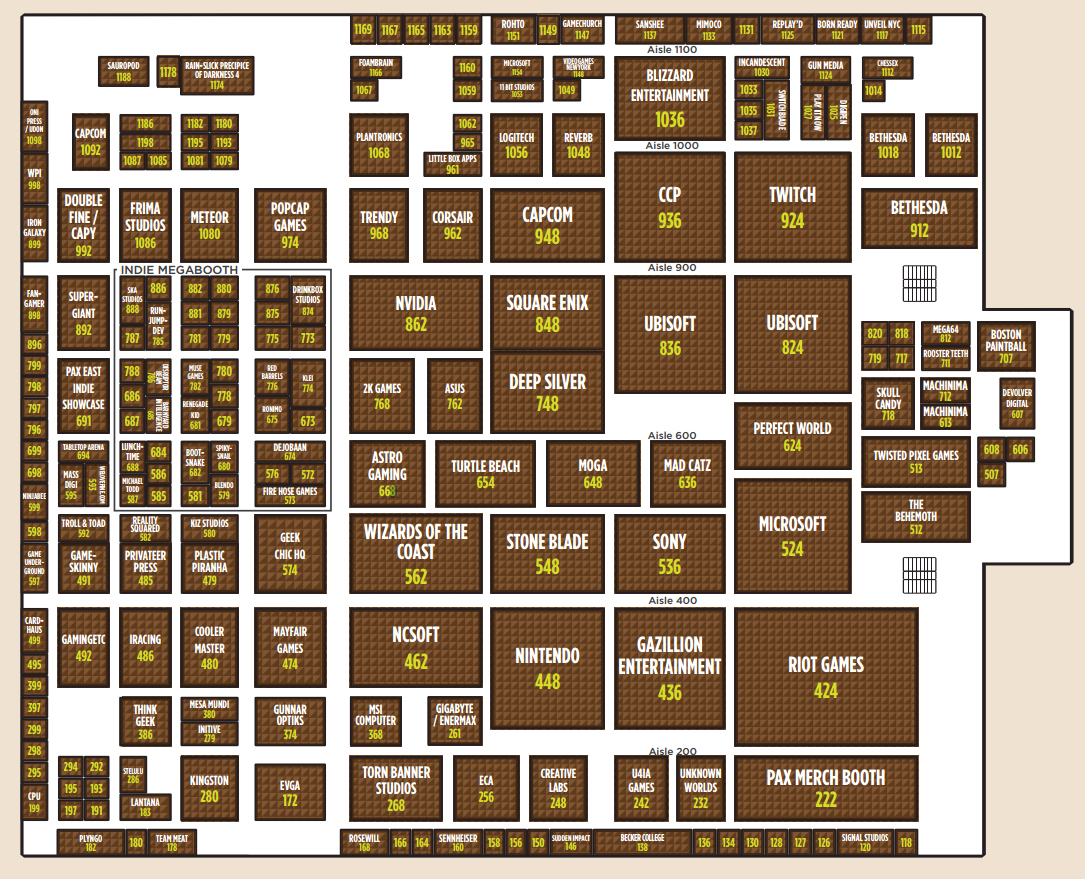 This is just the expo hall. There are 2 other levels to the convention center and a tabletop area.

All the news from the event will be posted to our special PAX tab that appears twice per year (now visible!) and will be heavily promoted on Facebook and Twitter. We'd also strongly encourage you to set up a feed reader (like Feedly) to stay up-to-date on the news as it comes out of the show.

Want to show your support for our endeavors? Follow us on twitter, feedly, and facebook, and don't forget to visit the front page or PAX tab when possible. Our YouTube channel will of course be receiving videos throughout the show, but those will tend to be uploaded overnight when we have a stable internet connection for sequential transfers.