PC gamers have seen the baby steps taken toward making a “next-gen” game for the past couple of years, and at PAX East 2013 they finally got to experience a hands-on preview of what’s to come. It’s creepy, it’s dark, and it’s definitely something to look forward to.

Our ace-in-the-hole is Zombie Studios, a Seattle dev that knows horror-inspired gameplay and Unreal engines like the back of its hand; supported by team members who worked on the likes of the F.E.A.R. and Condemned series, the studio is well-equipped to tackle the inherent challenge of creating a truly gripping and eerie environment. I got behind the mouse and keyboard to get an up-close look at Unreal Engine 4, its championing Daylight game, and chat with Zombie Studios’ Communications Manager Collin Moore.

We’ll get to the sexy Unreal Engine 4 a little further into the post.

When starting the demo, one of the first questions that arose was, “Where in the story does this demo take place?” Our character is in an abandoned, blacked-out hospital with nothing more than a flashlight and a compass (A compass in a hospital? Don’t ask where he found it) -- clearly there’s something we’re about to investigate.

Perhaps one of the greatest innovations beyond Daylight’s use of UE4 is the way that a player makes sense of the story. Rather than relying on a linear series of events, Daylight presents the story dynamically through objects players pick-up and examine – not too dissimilar from some adventure games.

“We have a bucketful of Legos, and every thing in the game is a piece. We take a handful of stuff and we build a map around it,” said Moore. Hopefully this is done without stepping on any pieces along the way.

While creeping around the hospital, players come across black-and-white photographs, medical records, newspaper clippings, and other story-related objects. This will allow you to piece the story together bit-by-bit, mostly by your own discovery.

But this story-gathering mechanic is only part of the development approach and a result of working with Unreal Engine 4 early on. After acquiring the license from partner Epic Games, one of Zombie Studios’ technical artists built out a three-room environment which rearranged objects randomly every time it ran (procedural generation, effectively). From there, Zombie’s creative director came up with the idea to harness that capability within a survival horror game. 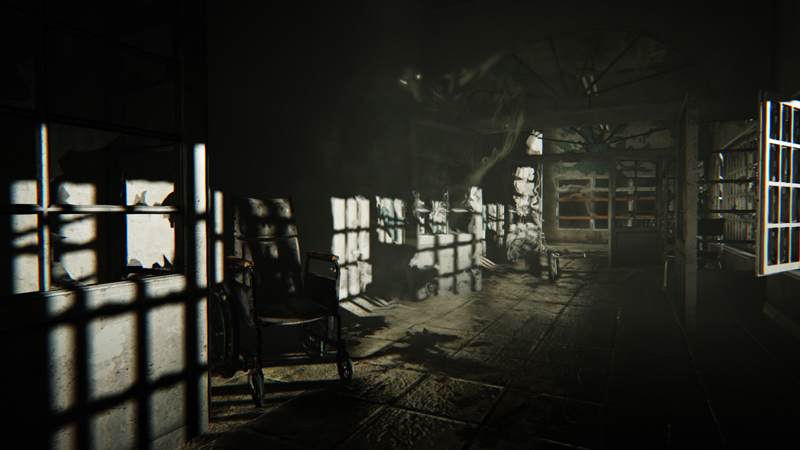 Replayability was the greatest challenge Moore’s team faced when planning, and because of this, not even the story is something the user will be able to crack the first time around. You’ll only see a small percentage of the objects in one go, so it will take you more exploring to find out exactly how this hospital went to hell. That brought me to think that players’ story interpretations will vary across the board, making for some lively conversation online and hopefully further expansion into the franchise.

Gameplay functions in a similar fashion, too. You could get lucky and pick up a flare early on, or you could walk through several stairways and gurney-populated rooms before coming across your first glow stick. Going another level deeper, there are triggers that result in your character’s (totally not afraid) utterances – like “what was that” when an object falls to the floor, or “it’s so dark in here” when entering a basement or lightless stairwell; all of this is dynamically scripted so that you can’t predict the game and run through recklessly based on what you saw in a strategy guide.

“Because it randomly generates every time you start the game over, we want to be sure enough people feel they can go through it and experience something without it being too long, but we also want it to be random enough for them to feel they’re getting enough out of it,” Colin said.

Just by experiencing Unreal Engine 4, I certainly got enough out of my first Daylight encounter. Unreal Engine 3 was capable of creating detailed lighting/shading FX and integrating high-poly models with high-resolution textures, but something about it often looked forced and almost cartoony when applied to real, familiar objects -- like walls and chairs. Daylight is flirting with fingerprint-laden monitors – showing a keen attention to detail – but also striving to integrate new UE4 technologies, as found in this tech demo reel. Daylight’s implementation of high-quality textures (from a first-person perspective) almost made me pick up my mouse hand and touch the screen when sauntering into another unpredictable environment.

(I talk about Daylight about 4 minutes through the below PAXCast video).

On top of focusing more on small details, UE4 has opened up a new level of dynamic lighting/shading capabilities that can more optimally take advantage of modern hardware. Not only did I find a rich presentation and combination of hues from artificial lighting sources (like the glow sticks and an ominous blue ether), but I also was impressed by how the light moved around me and set the tone for the pacing of the game. This is a result of Daylight’s use of a fully-dynamic lighting system, eliminating prebaked elements wherever possible in favor of real-time rendering.

Equally impressive as the visuals was the audio. Using their on-site headset, I felt immersed in the hospital by the sounds of my characters’ footsteps, the wind blowing through the halls, and other atmospheric noises. Moore mentioned this is the same audio team that worked on the Saw games and Backlight Retribution – a game for which cranked-up volume has a serious impact on immersion.

To no one’s surprise, Daylight was running on a GTX 680 (it seems like everything is at PAX East), but you won’t need to have a 6-series GPU to run the game smoothly. Moore said he’s been playing it on his GTX 560 and isn’t experiencing any issues. No minimum hardware specifications have been confirmed, but the GamersNexus staff agrees that UE4 seems heavily-optimized on the GPU component this time, and that older cards (like the 6870, even) should be able to run the game with relatively smooth framerates and on decent settings.

Daylight’s shaping up to show off Unreal Engine 4 while offering a unique flavor for the survival-horror genre. As an affordable, attractive, and highly-repayable game, I think Daylight’s something that will pick up traction across multiple gaming audiences. Whether or not it inspires us to upgrade our machines has yet to be determined, but – at least, for me – it has definitely pumped me up to get the shit scared out of me.