A manufacturer of cases, power supplies, coolers, and case fans, Enermax has recently branched out into some new territory in the DIY build market. Enermax’s new landgrabs include fan-less (passive) power supplies, liquid cooling, and even a portable amplifier. We looked at some of their new offerings while at PAX East and were particularly intrigued by some of the features in the Ostrog GT & Hoplite cases as well Enermax’s special edition air coolers.

Here’s a recap of Enermax’s US market hardware offerings, including the Ostrog GT, Hoplite, ELC120 & ELC240 CLCs, and the T20/T40 air coolers.

Enermax came out with two gaming chassis toward the end of last year: the Ostrog GT and the Hoplite ST. Both series are priced between $75 and $80, making them affordable, but not quite “budget-level” gaming cases.

The Ostrog is the more traditional “gamer-looking” offering with its three stock LED fans – 1 rear 120mm, 2 front 120mm – and bold aesthetics. It has a solid set of features for not just the entry-level builder it’s targeted for, but should scale reasonably for people who plan to upgrade along the way. I was particularly interested by the Ostrog’s 32mm of cable management space (more than the Phantom 820 we reviewed) and can imagine easily fitting a 24-pin cable behind the motherboard tray with a couple other cables routed beneath it. The top panel has 2x120mm fan slots and might be able to accommodate the slimmest 240mm radiator for liquid cooling within the system, too. You can find the Ostrog GT in two models: black with blue accents and black with red accents. 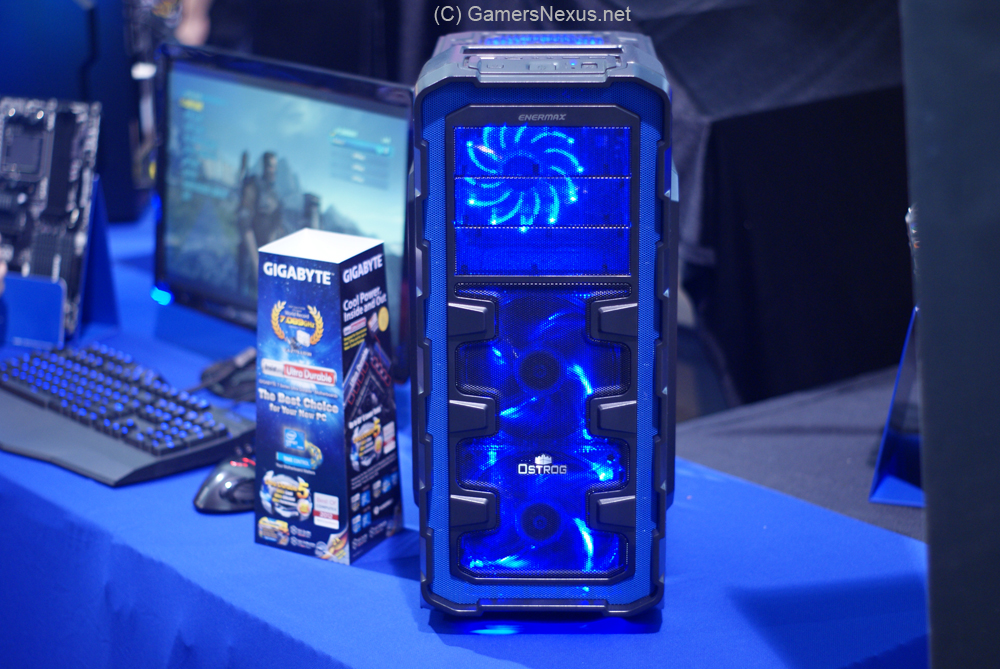 The Hoplite ST is not as flashy as the Ostrog, but has a couple of its own features that more experienced builders will appreciate. My favorite of those being the hot-swap drive bay embedded on the top panel, making for easy access to bare external HDDs. All you have on the top panel is the bare drive dock itself (also found in some of NZXT’s models and Rosewill’s models), which is concealed by a white tab that helps to prevent dust accumulation and keeps the aesthetics clean. Another feature I liked on the Hoplite ST was its front panel fan-control switch—a feature that seems to be growing in popularity in the mid-range and low-end markets—equipped with three speeds for up to three fans simultaneously. So if you’re running a program that generates high thermals, you can set the fans to high and then return them to low settings once you’re done. 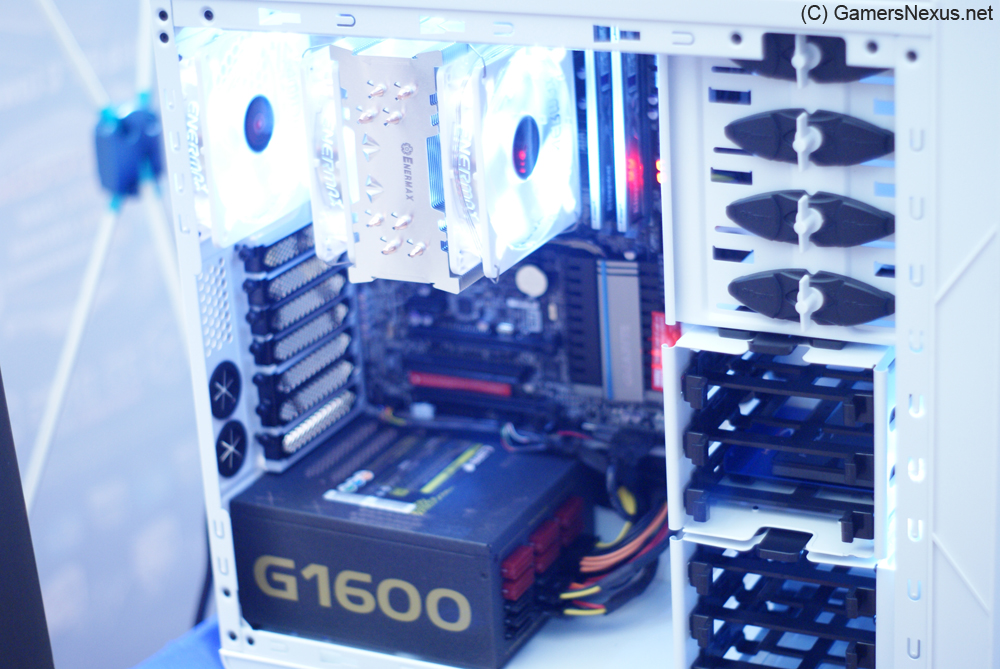 One of the things I wasn’t thrilled about was the case’s acrylic side panel; while it’s an attractive design, the fan mounts will be unusable with mid-to-large size CPU coolers.

For a full run-down of the features and specs, check out Enermax’s site.

The T40 and T60 CPU coolers have been around for several months, but they’ve been given some upgrades in the form of “special edition” tags (and a couple of useful things, too). 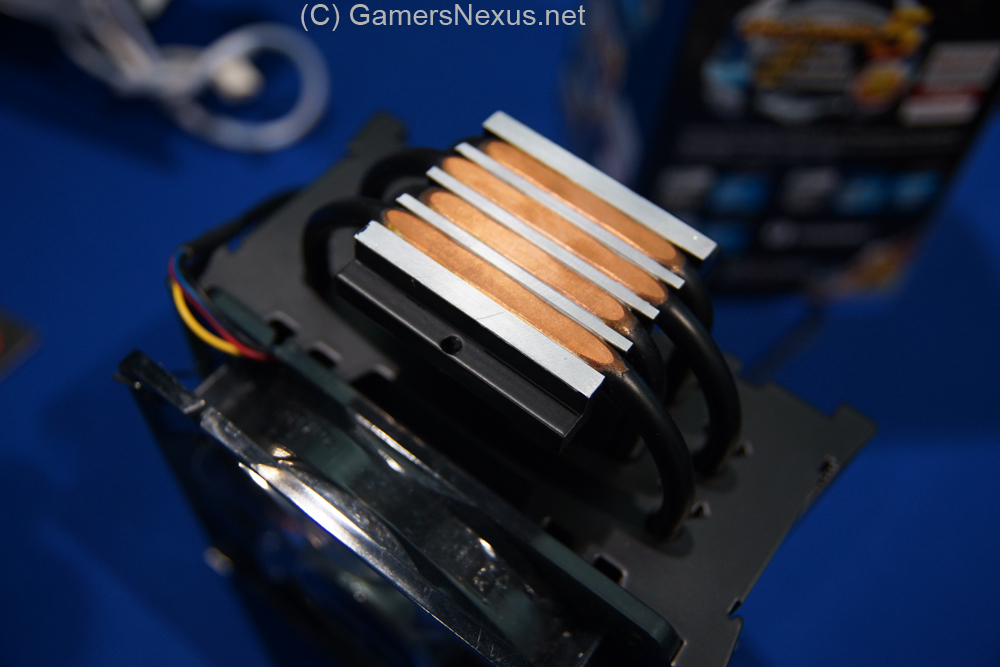 Both editions offer all-black and all-white models. That’s right, everything but the cold plate, which isn’t visible after installation, is painted one color. Though we didn’t get specifics on the coating, Enermax told us the thermal conductivity and dissipation potential has not been compromised. The black models come with a blue LED PWM fan, while the white model comes with a white LED PWM fan.

Regarding the price-to-performance ratio, the T40 is an entry-level model with a copper cold plate (about twice the W/mK rating as aluminum when under PC-level loads) and 4xCopper heatpipes (presumably sintered) with aluminum fins for adequate heat dissipation. The model is not dissimilar from NZXT’s own Respire T40 unit.

The T60 theoretically offers a higher level of performance with nickel-plated copper heatpipes and aluminum radiator fins. No prices for the special editions have been announced, but the current models are priced at $35 and $55, respectively.

Enermax also released two water coolers last year, the ELC120 and ELC240, but has not made them available in North America as of yet. As the model numbers suggest, one’s a 120mm radiator / CLC while the other is 240mm, and both of these mounts can accommodate push-pull configurations. Enermax was also reported to release an ELC125, which is a thicker ELC120, but that model hasn’t come to the market anywhere yet.

There were a few newly-announced products that Enermax wasn’t ready to show us at PAX, so we’ll recap the announcements here.

- On the cases end, Enermax plans to release its next Fulmo chassis, the Fulmo ST, next month in Europe; no release date has been given for North America.

- For power supplies, Enermax’s next offering will be a 650W fully-modular power supply that utilizes a passive cooling system.

- This is something I had no idea about until today, but Enermax also has a USB-compatible portable amplifier called the DreamBass.

DreamBass may turn into a sub-brand for Enermax, who at CeBit announced a notebook cooling pad with built-in speakers. Whether or not this delivers surround-sound quality in a portable form remains to be determined in testing, but hardware companies producing alternative solutions to default notebook speakers is trending in the market.

What other hardware companies at PAX East do you want to know more about? The GamersNexus staff has already talked to several representing companies and would love to hear who we should share about next. Go ahead and type a comment below or send us a Tweet.