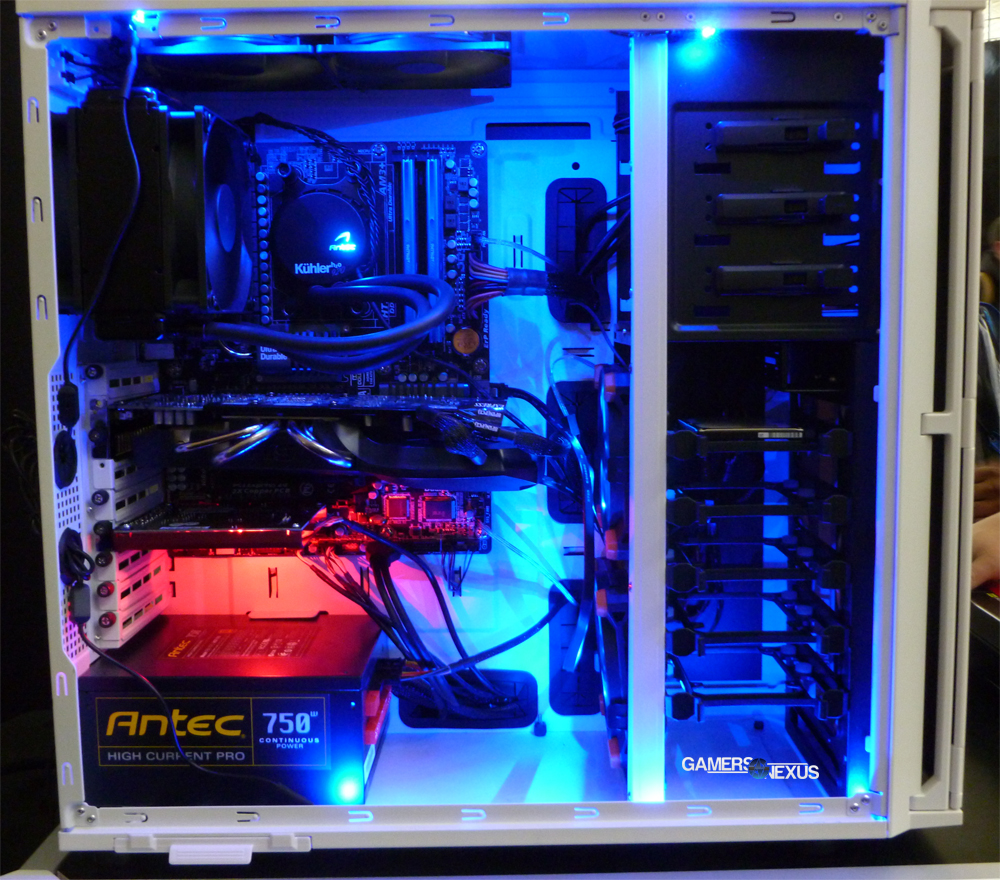 It’s been a while since Antec put out a new series of products spanning their gaming and enthusiast-level lineups of chassis, power supplies, case fans, and CPU coolers. We came away from our CES coverage learning about the GX700 case, new renditions of the Eleven Hundred and P280 cases, and a new line of media products – portable speakers, headphones, stuff like that – but at PAX East, we were interested in finding out if Antec is looking to continue with DIY building as they have in the past.

We spent some time at Antec’s booth and got the lowdown on a few interesting core components that we can expect further in the year, and we also got to see some impressive builds inside of their “special edition” cases. Let’s start with how Antec is continuing its most known product categories, beginning with power supplies.

First of all, later this year Antec will complete its multi-rail High Current Pro Platinum line with models including at least 750, 850, and 1200 watts. Last year the HCP lineup was revamped to include full modularity, a redesigned topology, and a partial darkening of wires – so Antec did more than increase the efficiency from 80 Plus Gold to Platinum. Antec also plans to bring a new line of power supplies to gamers and intermediate-level system builders out there; we assume the wattages offered there will start around 400-450W or so and expand at least into 750W.

On the cases end, Antec just released the GX700, which is an entry-level case targeted for gamers; you can tell by our photos here that they’ve gone for the military-inspired look, not too dissimilar from the Corsair C70. The cooling features are somewhat standard at this price-point, including 2x140mm fans in the top and 1x120mm fan in the rear, by stock configuration – but I didn’t like how the front filter can only be accessed by twisting off the thumbscrews; the flip-down mechanism on the P280 (and other modern cases) makes more sense to me. That said, there were a couple other design features I liked, such as a rear latch that allows you to work with your expansion slots and video card(s) without scratching your case or your hand. For more of our impressions, check out our extended coverage. 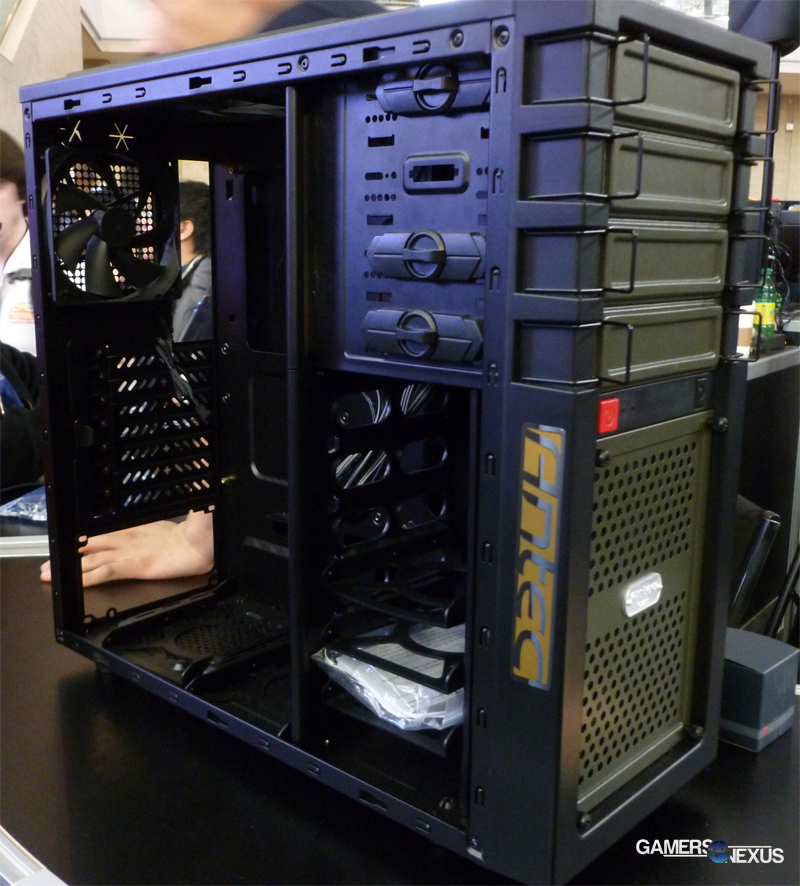 Unfortunately, Antec didn’t have any other new case info to share with us. Like many people out there who have been building machines for the past 10 or 12 years, we really would like to see Antec give us the next Performance One successor; the P280 is a great case for someone who has a lot of hardware but wants to keep noise levels down, but it was intentionally designed with a broader audience in mind. Perhaps going with a full-tower frame and revisiting compartmentalized drive cages or sections within the case could raise some eyebrows.

New cooling gear was absent at the show, but there are a few developments worth sharing. Within the next month or so, we’ll see LED versions of the TrueQuiet fan series. If you’re unfamiliar with TrueQuiet products, these 120mm and 140mm fans use a fan blade that’s fused to the frame, so the entire fan and its circular perimeter spin as a single unit. The benefit of this design is increased airflow as a result of freeing up more space and decreased turbulence between the blades and the outer wall; we’re curious to see how significant this increase is, though haven't had a chance to test them yet. Mounting the fan is tool-less and the fans have silicone padding at the corners of the frame to absorb vibration from metal contact.

A few months ago, Antec updated the KUHLER H2O series – the single-fan 620 and dual-fan 920 – with the fourth-generation cold plates that, across the spectrum of liquid coolers for many other manufacturers, have reduced CPU temperatures marginally. Noise levels have also reduced slightly, and thankfully the retail price has stayed the same as the original KUHLER releases in 2011.

Antec also told us that it’s close to releasing a 240mm liquid cooler, the KUHLER H2O 1220, but unfortunately that’s only coming to parts of Europe. This was a bit disappointing since we got a teaser of the 1220 at LANFest last fall, but Antec said they’re at work on other cooling solutions that aren’t the same 620s and 920s we know of.

Antec shared PAX East space with Newegg, Kaspersky, Cyberlink, and Seagate. We didn’t get a chance to cover it, but the booth’s speed-building PC contest was won with a fastest time of 8:49. Antec and its partner companies also raffled off four gaming PCs built inside their P280 White Window (exclusive toCanada) and Eleven Hundred cases. Here are the specs: 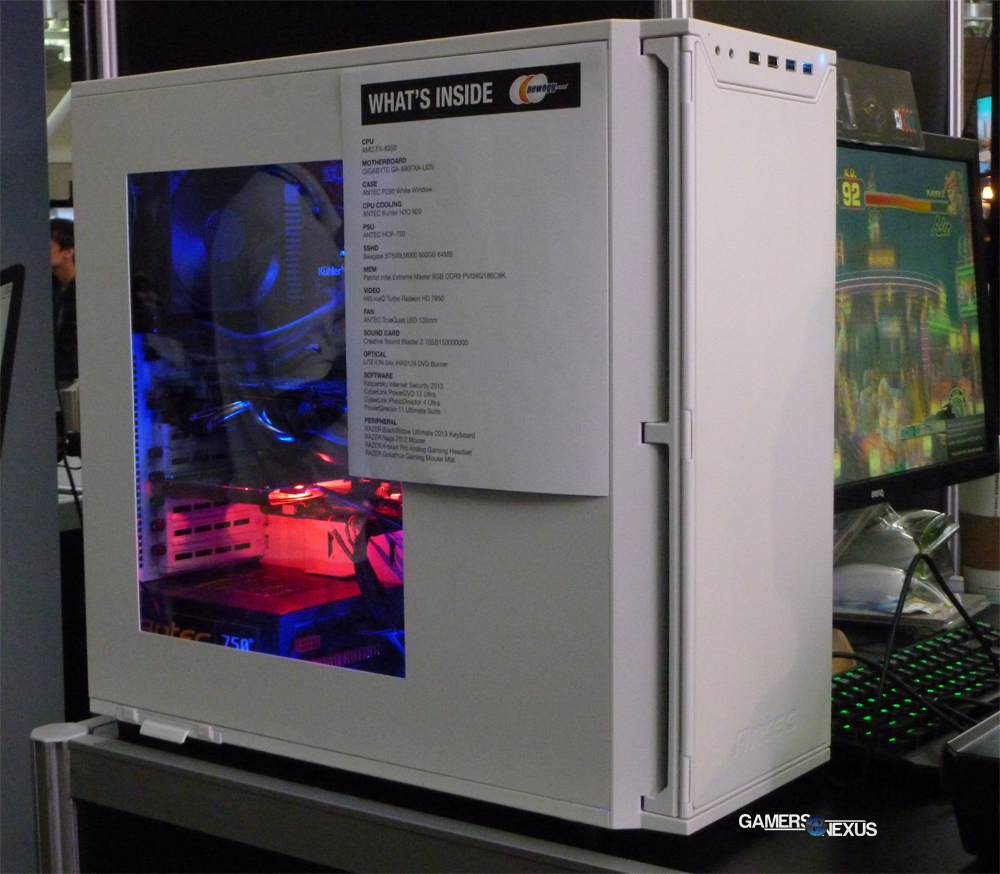 It’s tough to tell at this point, but we’ve got the sense Antec is a few months away from putting out new series of products that will theoretically be more than just a layer on top of other iterations. Some of the interim releases like the M1100, HCP-1000, and updated KUHLER series are noteworthy product refinements, but it seems Antec is readying itself to give us a new line of just about everything.