The outlook for PC gaming is bright: The enthusiast market sector is steadily growing—as it tends to do leading into a new console generation—and our industry contacts are all in agreement. During meetings with nVidia, Intel, Corsair, and even AMD (who have a vested interest in the new PS4 and Xbox), we were told emphatically that they firmly believe hardware enthusiasm and DIY building are on the up-and-up, and these claims are reinforced by an 8% growth in PC gaming last year.

Hardware trends ebb-and-flow with the driving forces in the market, and for the past year or so, the biggest two trending interests in DIY machines have been affordable liquid cooling and SSDs. PNY's got both of those, but today we're going to focus-down on their new, modular liquid cooling loops for video cards.

We were able to meet up with PNY at PAX East 2013 (where we also said 'hi' to Kingston, Rosewill, Cooler Master, and many others), and PNY's reps were keen to showcase their pre-production, Asetek-supplied integrated-and-modular cooling solutions for video cards.

You'll find a full article and supplementing video walk-through below, where I was joined by PNY's Director of Product Marketing, Mark Honeck.

Asetek has been in the news quite a bit lately, but they're still best-known for their supply-side presence in the computer CLC market. Just to briefly recap for those who don't know their involvement: Asetek supplies nearly every pump, radiator, and tubing solution for some of the best-known closed-loop liquid coolers (CLCs) on the market, to include NZXT's Kraken-series CPU CLCs and Corsair's H90/H110 coolers. 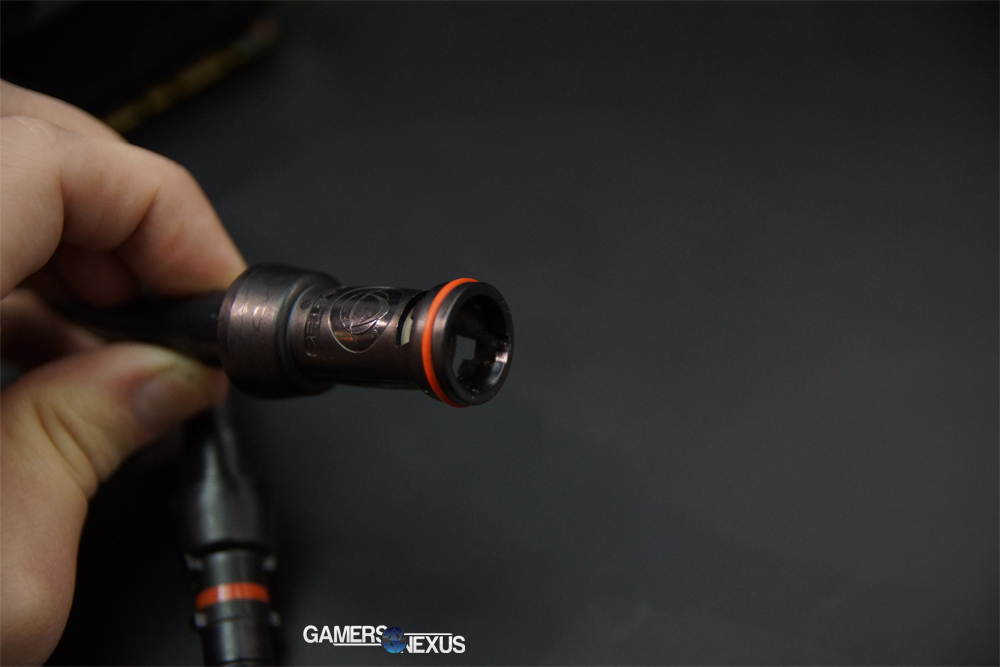 PNY has teamed up with Asetek to introduce modularity into the consumer VGA cooling market (already present in some high-end enterprise solutions), starting with nVidia's 600-series Kepler video cards.

PNY and other manufacturers have previously explored CLC-equipped video cards, though these solutions rapidly run into barriers when multi-GPU arrays (SLI/CrossFire) or CPU CLCs are introduced into the system. A case only has so much room for radiators and tubing, but not everyone has the money, interest, or maintenance availability to properly implement an open-loop configuration; the downsides of open loops are amplified when considering LAN boxes or other on-the-move requirements.

Closed loops offer a low-maintenance, cheap, entry-level, but-sometimes-still-quiet cooling opportunity for use cases where an open option would be otherwise impractical.

The single biggest noise generator in most modern systems will be either the video card or power supply, depending on the rest of the components; quiet CPU coolers (in both air and liquid form) are prevalent, SSDs are dead-silent, and larger cases have eliminated the utilization of high-noise, small-diameter fans. VGA fans can keep the on-board memory cooled with great efficiency, but those cores get hot (even Kepler, relatively speaking), and also have added complications with the Boost 1.0 temperature threshold. This means they have flexibility to spin-up to upwards of 5000RPM in some cases, giving them great noise potential. If you configure a custom fan curve in MSI's Afterburner (read about how to do this here) and designate a maximum temperature allowance of 70C on Kepler architecture, you're probably going to have the fan(s) running at a high, noisy RPM when running GPU core-intensive games.

And depending on how good your sound system is, that noise will either be ignored... or it'll eat at your brain for hours on end, slowly driving you to the brink of alt-F4ing out (Don't do it! You have so much to game for!). 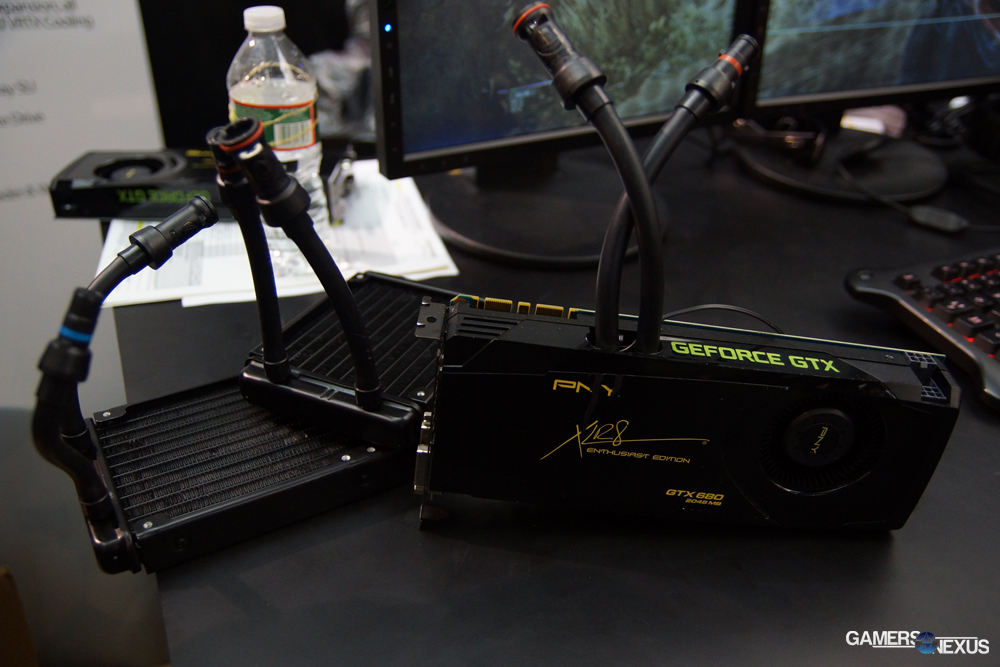 As demoed in the above PAX East video, PNY hopes to enable semi-closed, modular liquid cooling—including multi-GPU arrays and CPU inclusion—without filling a case with so many radiators and unnecessary tubing that it resembles a home AC unit.

The cards themselves are similar construction to what we're used to: They use an on-board heatsink and a centrifugal fan (see also: "squirrel cage fan" or "blower") to keep the memory and controllers cooled at a low-noise budget, but pump liquid in to the actual chip in a standard pump/tube/rad pipeline.

However, instead of cycling the liquid purely through an in/out loop, there are break-points along the way to accommodate additional (and compatible) liquid units. The switches use standard male/female connectivity to create either a simple rad-device loop or daisy-chain multiple units, and we were told that making or breaking the connections will not introduce air to the system.

The equipped PNY cards will ship without a radiator component, so it's just the card, some tubing, and switch. PNY told us that they'll be selling self-branded Asetek cooling components (like the radiators) separately, giving them a lower price-point to enter the VGA market and giving users a greater degree of modularity; if you wanted to buy a Kepler series card (take the GTX 670, for instance) with this cooling tech and then choose between a large or smaller radiator size, you could do that. We're not sure yet what specific radiator sizes will be made available (presumably in the form of 120 and 240, though it's possible that 140 and 280 could happen), but it's certainly an interesting approach to DIY cooling without the somewhat inclusive demands of open loop solutions.

In terms of what we saw at PAX, the most immediate advantage would be realized in daisy-chaining multiple identical GPUs to create a semi-custom loop for your SLI array. The possibility of including the CPU's cooling in the system is an interesting one, though that would require a custom cooling block/pump on the CPU that could integrate with the other switches. We're not sure if Asetek plans to supply these at this point.

And because I know how you guys think, we brought-up the subject of connection cycles and estimated connector lifetime. Good news: PNY says Asetek has a high target for connection cycles, but they're still testing specifics. Even if it's fifty, that's plenty for any consumer.

As I've said once already: It's an interesting approach to a rare problem, but there really aren't that many clean, out-of-the-way solutions to multiple liquid-cooled VGAs short of just using an open loop. We're not sure what the thermal spec target is for cards with PNY's new solution, but look forward to testing it when it ships later this year.

Personally? I enjoy the thought of eliminating extra time/money required to build an agreeable open loop while still maintaining a level of control. Not everyone needs liquid, and very few people need open loops, but from an enthusiast angle, it's a fun topic to play with and really brightens the interior on an aesthetic level. Besides, there are only so many times you want to purge and re-fill a box during transit.

Beyond our regular PC builds, I believe this is actually our first extensive PNY coverage! What does everyone think? Any questions for us to pass along to PNY?

Thanks to Jay Chen and Mark Honeck of PNY for demoing the products.