After announcing that Guild Wars 2 will not give rise to formal expansion releases, NCsoft’s next big step forward in North America will be WildStar, a sci-fi/fantasy MMORPG slightly inspired by NCsoft's traditional fantasy franchises. NCsoft and developer Carbine Studios have teased us about WildStar for almost two years, but are now just a few weeks from taking it into closed beta. Time to explore out why it's worth checking out.

The premise of the game revolves around a technologically- (and magically-) advanced race known as the 'Eldan,' a people who have mysteriously disappeared from the world of Nexus, leaving their superior technology and civil structuring behind. Those resources have led to a conflict between two cohabiting factions, 'the Dominion’ and 'the Exiles'.

This quick trailer should bring you up to speed:

Players choose their faction, race (several for each faction), and their class - all fairly standard proceedings. Carbine Studios’ differentiating factor comes in the form of 'Paths,' effectively a reward/bonus system that supports your natural interactions within the game (similar in scope to real-world professions). I’ll describe this a little further down.

Like most MMOs, WildStar supports PVE and some PVP gameplay modes (including a unique player-driven raid mode), dedicated guilds, and an item crafting system.

Combat is basic and familiar in appearance, but there are some simple-yet-empowering enhancements that come in the form of dynamic events: meteors plummet to the surface and crush enemies, a spaceship might land and unload a pack of guards that set up a new encampment, spotlights on the battlefield enable player-targeted aerial strikes (to the tune of an FPS), and plenty more. The battlefield is fully-responsive to in-game events and is fairly fluid in its interactions. There’s a very rich blend of random instances that WildStar dynamically generates in order to maintain a less predictable, grindy world.

In another example of this, Carbine created several varieties of item-drop interactions, to include distribution via vending machines -- some of which are demonically possessed and require an immediate call to arms -- all tying into the active theme. And I thought I'd seen it all. 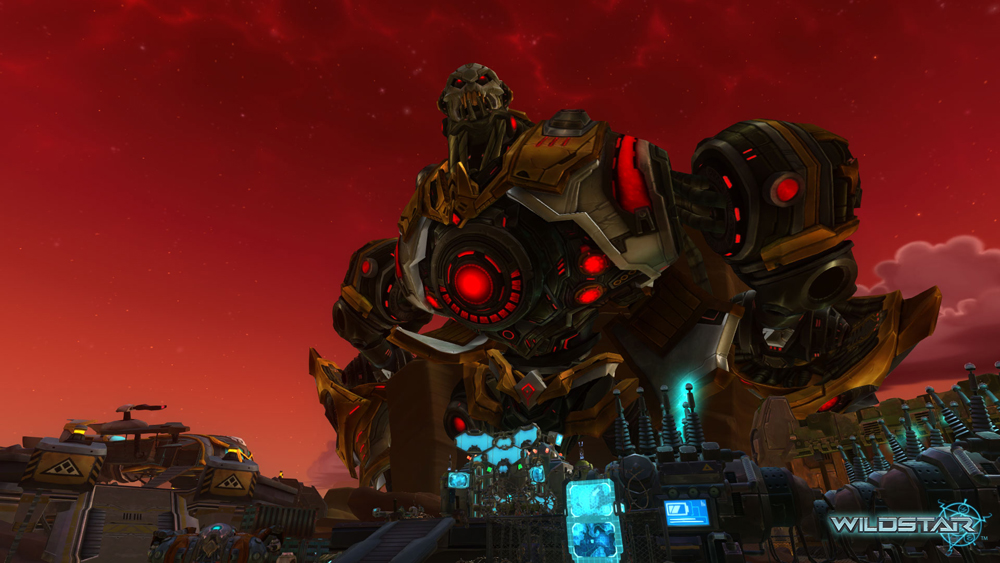 Carbine Studios is also going after a player-reward system that provides bonuses for little user-controlled actions in the game: dodging an attack, dispatching an enemy quickly, and mining a particular spot could all result in small-time buffs or exp/bonuses. This is done so a player’s success isn’t completely based on how efficiently they grind through quests and skill trees for their classes/races, hopefully opening the game up to players tired of the more grind-intensive MMOs.

Perhaps the most inviting gameplay innovation in WildStar is the Paths system. In addition to leveling-up and improving class- and race-based abilities through traditional trees, players will experience a rewards system specific to their interactions within Nexus: If you like collecting things, killing things, or exploring, you'll get rewards that further encourage those actions.

Carbine understands that some players prefer to be constantly fighting while others might enjoy collecting items, talking to everyone in a town, crafting, or building-up player homes. Carbine hopes that their Paths system will enable players to do what they want to do and still get rewarded for it, rather than constantly grinding levels. There are four Paths in WildStar - Path selection is permanent:

Here’s how Paths work in relation to the rest of the game:

You get bonuses and experience for completing path-specific quests or interacting with path-specific game elements. For example, if you’re someone who likes to touch every peak in the land, you’ll get Explorer XP with every steep climb you endure. 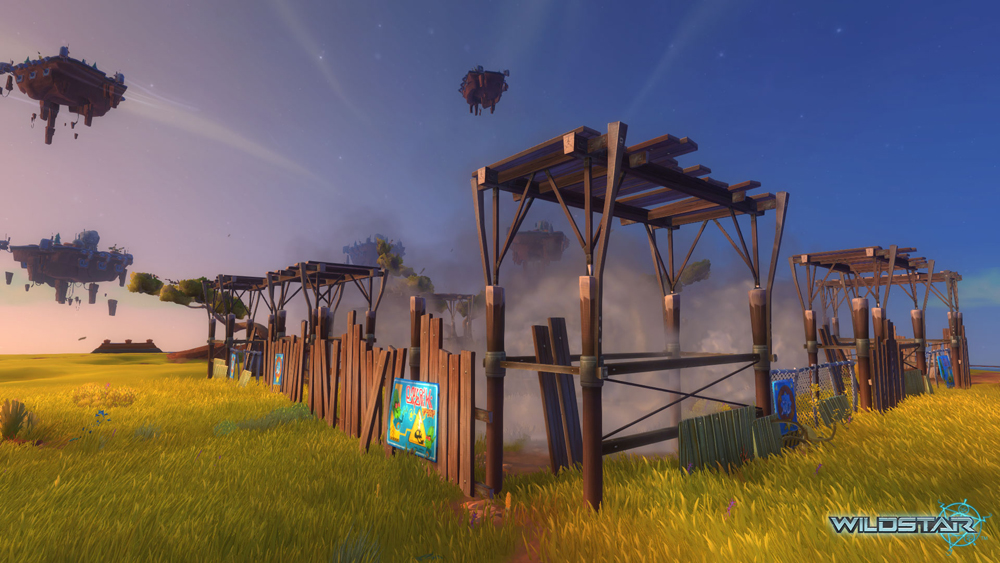 Path perks are fairly vast in their offerings (i.e. speed boots, jet packs, experimental weapons) and can be selected to flesh-out characters for more targeted or broad circumstances, as with most MMOs. While Carbine wants your own Path to be important, they also are keen to develop engaging gameplay dynamics for parties - we don't have much info to share yet on this front, though.

As for the game content that feeds into Path advancements, some of the quests / discoveries are static (like landscapes) and some are dynamic, for obvious mechanical reasons. That said, WildStar does hope to focus on dynamism when possible. Paths make up a huge chunk of WildStar’s advertised 200+ hours of content—about 25-33%, according to Carbine.

Carbine was excited to show us the game's housing feature in our time with them at PAX East.

Once you reach level 6, you can buy your plot of land (“SkyPlot”) and trick it out with items that literally fall from the sky (random drops), crafted goods, mounted monster heads, etc. Multiple housing item vendors are available for shopping, and although I didn’t get the complete specifics, I imagine something along the lines of the Borderlands vendor system would be pretty fun to play around with. Your SkyPlot can also be turned into a resource-producing farm or even house a small dungeon where you can experiment with new combat abilities. So if you’re waiting around for friends to join you in a raid, you’ve always got something to do on your turf. 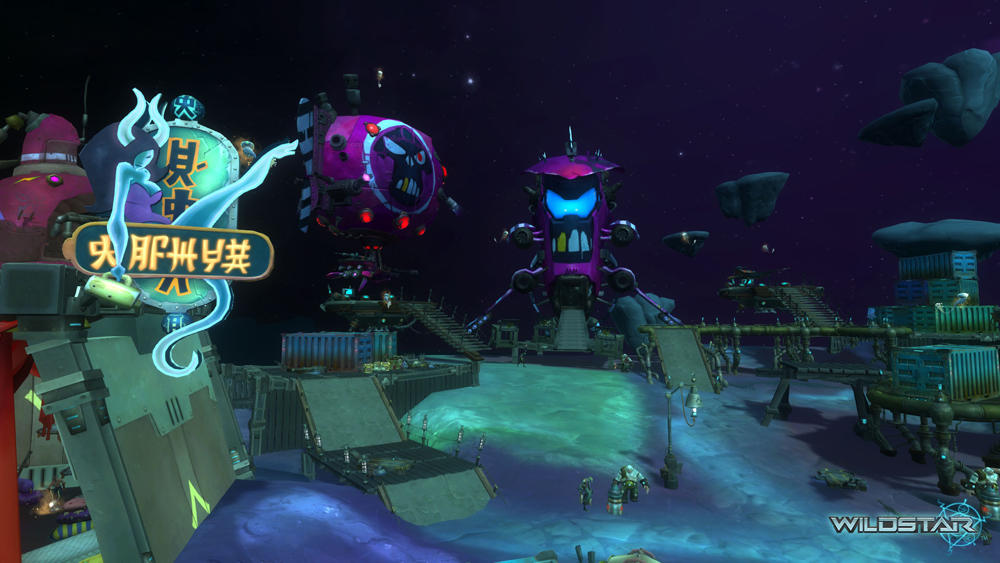 SkyPlots are also mobile, so you can move the entire house between different zones within Nexus. Similar to Rift's Dimension system, friends and guildmates can visit your domain with a simple invite; visitors can (with your permission) participate in decorating, resource-gathering, or in fending off enemies in the dungeon. All participating players will receive experience and loot from these actions.

Another gameplay element stemming away from the run-of-the-mill MMORPG experience is explored in WarPlots, player-constructed fortresses that can wage war on one another. Carbine will reveal more about this as the game moves into beta, but for now, it looks an RTS-inspired mode designed to break-up the somewhat monotonous hack-n-slash. WarPlots are scaled to hold tactical look-out spots, heavy defense walls, giant turrets, and just about anything else you’d want to bring your enemies down. Players can raid opposing WarPlots on foot and collect resources, so this is more than just an MMORPG sideshow.

I’ve come away from PAX East with WildStar as one of my most anticipated titles for 2013 -- and there were quite a few games there. WildStar is critical to NCsoft's persistence in what’s sure to become an even more crowded MMORPG market within the next couple of years' with competition coming from Blizzard’s speculated next MMO, EverQuest Next, and The Elder Scrolls Online, fantasy MMO fans have a lot of impending options.

The variety among characters and environments, the diverse and intriguingly-foreign world, and the playstyle-driven approach to customization and leveling promise to reinvigorate the tired MMO standard. It's just a matter of how many of these promises will match the hype.

The influences I can spot in WildStar leads me to place its approach to gameplay in a class of its own: It's one part Ratchet & Clank, one part Bioshock, one part Borderlands, and, hell, even one part Fraggles, all mixed into an MMO.