If producing one of the enthusiast world’s first affordable modular cases wasn’t enough to garner attention at this weekend’s PAX Prime 2013 exposition, Cooler Master decided to throw a couple grand worth of parts into the mix. Seen from booths away, the monolithic HAF Stacker stood as an obelisk to system building enthusiasm among its smaller modules. In these quick video overviews, we’ll look at Cooler Master’s HAF Stacker specs, MSRP, and give some impressions of the enthusiast-class case.

Before getting into more detail, here’s the specs break-down:

For information on the system’s specifications (not specific to the Stacker), check the next video (protip: includes 2x690s, Maximus VI, and beautiful custom liquid loop).

Here’s the thing with the Stacker: The idea is that it’s entirely modular in its use case scenarios and mechanical design, so it could theoretically be deployed in a number of system building environments. NAS configurations, multiple PCs in one tower, server setups, and server + desktop setups are all possible (among other uses).

The enclosure ships in two primary pieces -- the HAF 925, which is the tower section, and the 915. When purchasing the 925 for $170, you’re given an accompanying 915 unit for use atop or under the 925. The HAF Stacker modules employ a rail system, so you could detach the stock top panel from the case and mount any number of additional 915s to each other (or to the 925). To that end, if as a user you decided you only wanted one 915 (or two connected 915s), those can be purchased separately for $70. They’re effectively a mini-ITX host at that point, just with support for full-length VGAs and wind tunnel-esque cooling.

Because the cases can be stacked in such a way, the 915s can be deployed as NAS or server hosts atop/under the main rig. For instance, in your 925 mid-tower, you could house a full-ATX system with all the bells and whistles – then host a mini-ITX box in the above 915 rails-attached module. The use of this? Use the mini-ITX system as a DVR replacement, a game server, or a browsing rig while your primary rig (in the 925) renders out a video or deploy one as a guest machine. Each module has interconnected, grommeted holes as well, meaning you could theoretically install a server-grade PSU (like a Rosewill HERCULES unit) in the module, then run its cabling to power both machines. 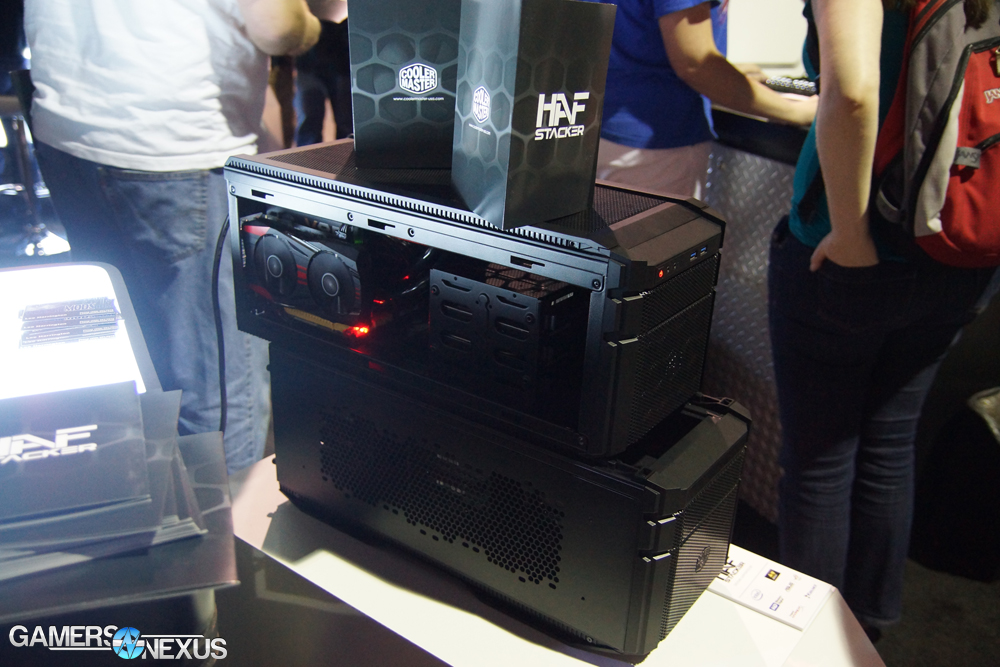 The 915 modules can each fit up to 2x360mm radiators, so if you’re not excited about a multi-system enclosure or NAS, you can at least load it with custom liquid loops.

HAF Stacker modules ship in both front- and rear-mount PSU solutions, allowing for even further customization. Side panels with glass, glass + fan, and solid/grill options are all available for purchase on the 925; the 915 offers glass panels or solid/grill panels.

The HAF Stacker ships at $170 for the full unit or $70 for just the modular 915 unit. Cooler Master’s website alludes to a release date at the end of PAX Prime.