More than a Replica

Imagine a publisher asked you to make a game based off of your favorite FPS from your teenage years; you have today’s graphics technology and can add / remove features from the game to perfect it to your vision. That’s how Shadow Warrior’s conception went down between Devolver Digital (Hotline Miami) and Flying Wild Hog. Writer Slawomir Uliasz and game designer Pawel Kowalewski played the original game and were excited to get started revitalizing the franchise. Just 20 months later and they’re on the doorstep of its release.

Shadow Warrior isn't your run-of-the-mill HD remake; it's more like a reboot – an interpretation and expansion of the original. No one from the 1997 game’s team worked on the current title, and nonetheless, Flying Wild Hog decided to retain the setting, gameplay, and protagonist of the original.

You play as Lo Wang, a war-hardened, loudmouthed, sword-wielding badass who fights through waves of demons and suit-clad henchmen. The racist, sexist 'humor' of the original game – and of other 90s games, like Duke Nukem – has mostly been removed in favor of more thought-out dialogue and other one-liners ("You got Wang!").

“He’s a douchebag, actually, but it’s a character you [grow to] like. He’s a geek, he likes video games, movies,” said Uliasz, pointing out that Wang occasionally references Dirty Harry and kung-fu films.

Lo Wang is tasked with driving away an invading horde of demons from another world called the Shadow Realm. Players will use a variety of firearms and an enchanted katana (the "Nobitsura Kage") to combat the dark forces and rid Japan of its evil. The game is best known for its visceral melee combat, shown in the video above, where Wang makes short work of his enemies in close quarters.

Let's look deeper into the weaponry. 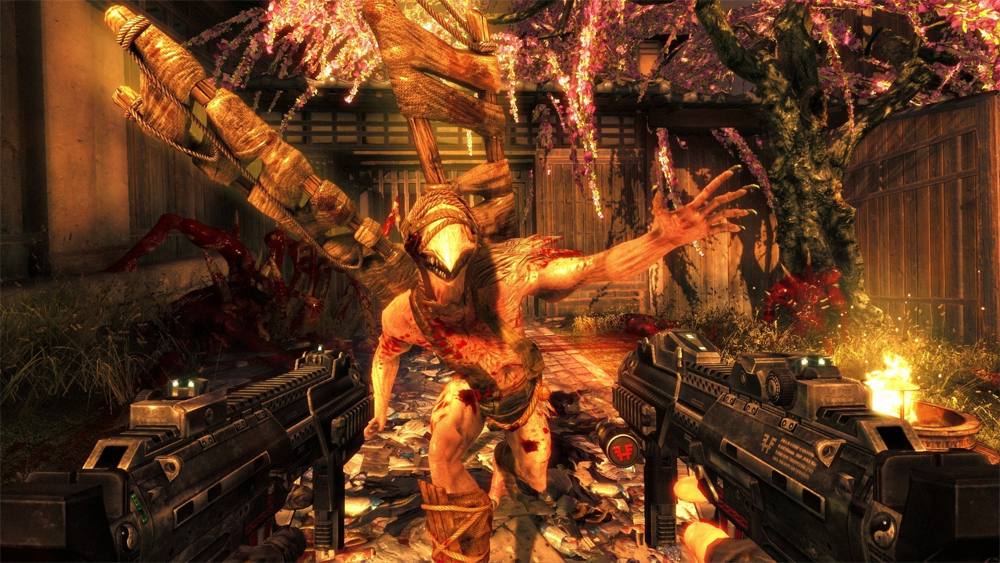 I’m sure a lot of us remember the good ol’ days of arena shooters: the days when you could carry as many guns as could be found without limitation. Shadow Warrior keeps the tradition alive with several firearms – each with two firing modes – and a couple of more unique weapons. Flamethrowers, crossbows, and the game’s cornerstone, the Nobitsura Kage katana (explained further down) all make a weighty appearance in Wang's pendulous sack of tricks.

Perhaps the most entertaining kills come when Lo Wang wields a demonic heart or head. Squeezing a heart causes enemies around Lo Wang to implode, resulting in gratuitous pools of blood, and holding an enemy’s skull shoots a beam that liquidates your foe within a couple seconds (Think: the link gun from Unreal Tournament). The added mechanics of using enemy body parts as weapons can be thought of almost in the same style of a VooDoo doll.

On top of the base selection of weapons, individual component upgrades are also available. Money collected throughout the game can be put toward standard enhancements: Firearm accuracy, clip capacity, and similar upgrades all encourage progression. It's not an innovation, but an important feature of any modern shooter.

The Powers of the Nobitsura Kage

Guns can get the job done against any enemy, but a power-possessing katana may be your best (and most fun) asset in Shadow Warrior. As Lo Wang racks up enough karma from kills, he learns new powers for his katana that make combat bloodier and more enjoyable than ever. Deal death more quickly with a charged lunging attack or send ki (energy) from your katana in the form of a boomerang-shaped shockwave; Flying Wild Hog has designed the katana to suit a variety of purposes, but the team put heaviest emphasis on ensuring melee feels fun and fluid.

On that note, Slawomir showed me how the katana can be used to take down giant bosses. He loaded up a boss battle and used the ki wave power several times to strike the boss’s midsection, then charged up his lunge attack for when the boss came in close to stomp on him. In similar fashion to Shadow of the Colossus, boss battles progress as the player targets key weak spots on the enemy, lending a bit of an old-skool vibe to the game's major fights. 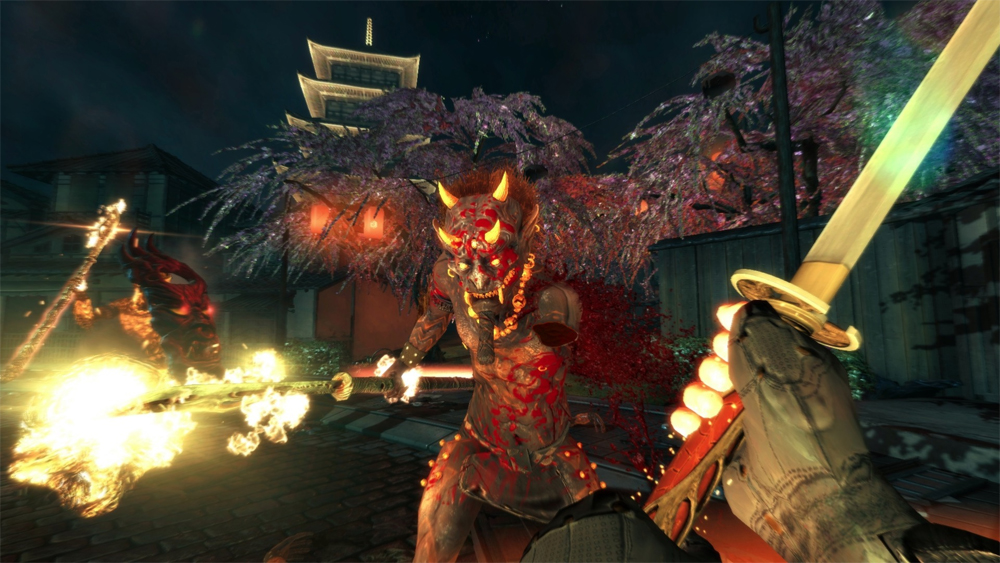 Shadow Warrior takes place in current-day Japan and is beautiful to look at. Sure, it’s not a Crysis 3-like AAA title, but it’s a stunning, unique blend of rural Japanese architecture and nature, art and artifacts from feudal Japanese times, and endless pink and fuchsia cherry blossoms. It reminds me of a first-person Ninja Gaiden; instead of your typical FPS environment with particle-heavy smoke and debris on top of gray color palettes, you have this natural, pristine backdrop that stages a violent, gory frenzy. The game runs off Flying Wild Hog’s proprietary Road Hog engine (from Hard Reset), and it still looks sharp two years later.

Shadow Warrior also surprised me with its many off-rails opportunities. The game presents the path you’re supposed to go down most of the time, but doesn't interrupt any tingling of curiosity. Exploring the environment will lead you to Easter Eggs, infamous bunnies, and other references to the 1997 original. In fact, Flying Wild Hog literally copy/pasted snippets of the original game’s code into their build. I won’t give anything away, but I encourage fans to really check every nook and cranny between dismembering demons.

Shadow Warrior is a blast to play. It’s beautiful to look at, easy to pick up and play, and loaded with over-the-top gore, humor, and puns. Unfortunately, it won’t have a multiplayer or cooperative component, but it’s the kind of game I’d love to record in-game videos of so I could show my friends how much carnage I can deal with The Wang. The game almost feels similar to Far Cry: Blood Dragon in its over-the-top ridiculousness element, so if that's your speed, definitely look into Shadow Warrior.

Shadow Warrior releases on September 26th for PC and retails for $40. A $50 special edition including exclusive in-game weapons, a digital art book, and the game’s soundtrack is also available on Steam.

Devolver Digital has not yet confirmed its plans for Shadow Warrior next-gen platforms.