Getting Started with Case Modding & Painting

In the above video, Bob Stewart & Rod Rosenberg cover a few key topics for newcomers to case modding; they talk about their first mods, optimal case selection, breaking into case painting, and resources for additional support.

In our final video, Bob & Rod give us a run-through of their Throne Industrial mod, talk about why accusations of "shitty welds" were seen as a compliment, and go over some of the more advanced machining and painting techniques involved. Rod covers machine and software segments, where Bob takes painting and overall design.

All the intricately-crafted B-roll laced over the advice from the experts can make things intimidating, so I figured I'd give a bit of a beginner's perspective on things (for other beginners).

I've done a few case mods -- an Iron Man PC, Dodge Hemi engine PC (complete with functional PVC exhaust pipes, connected to 80mm fans), and a GN-branded rig that is yet unfinished. Aside from the Iron Man paint job and custom cutting, all the other systems I've worked on have been old, ugly, beige cases from the late 90s. 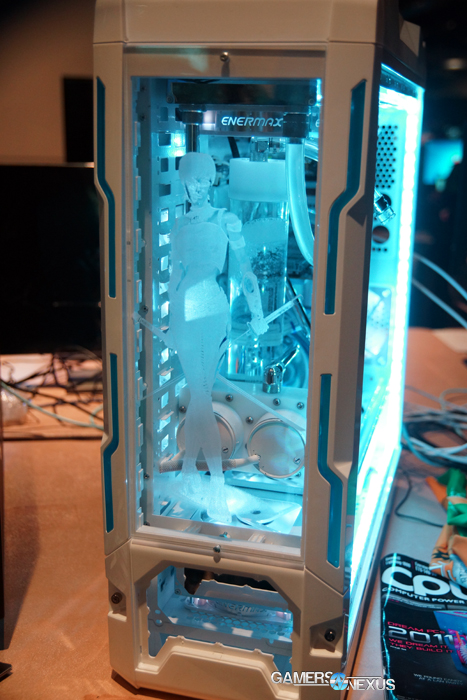 ATI Ruby - encased in carbonite.I visited a local High School and took three cases off their hands, which they happily passed off, and began cutting and painting. I had no investment in the cases, sentimental or monetary, and wouldn't be remiss if I'd caused irreparable damage.

My initial investment was about $50 in spray cans from Autozone; from there, I picked up a hole saw from the hardware store and began cutting out custom 120mm fan slots in the side panel and top panel. Then it got more advanced - I bought a fiber glass kit from the hardware store and made a custom-molded roof scoop for my Hemi case's top panel fan (with red LEDs, of course). A trip back to the auto shop yielded some rubberized window sealing, which I used to buffer a hole I'd cut in the case with a friend's jigsaw, then installed a plexi sidepanel.

Nothing mindblowing, but with a bit of confidence and access to a few tools, it's not hard to fall in love with a giant piece of obsolete steel from the 90s.

None of these were particularly expensive in terms of time and money, but rekindled that DIY spirit we all get when we're really invested in a custom project. Need some inspirational material? Check out our gallery of PAX's best system builds and case mods.

If you have any questions about case modding at all, we strongly recommend you leave a comment for the BSMods team to check. You can learn more about Bob Stewart's mods over at the BS Mods website; Rod's website can be found here.

And remember to post a worklog to our forums (or theirs) if you get started on case modding!