You know someone’s a gamer when their first instinct is to start jumping on things: Lampposts, fences, buildings, NPCs – and, in the case of Firefall, roaming packs of enemy players in a cataclysmic arena. The last one, unlike its preceding brethren, resulted in the death of many a red-armor-wearing opponent. None survive the death-from-aboves performed by my beastly character, Mr. Cotton, wearer of fearsome pink armor.

Well, maybe one. Maybe several, actually, but let’s not get stuck on minor details.

With the guidance of professional smooth-talker James Macauley (rumor has it that he also works part-time as the VP of Production Development at Red 5 Studios), I was able to glide through some of this free-to-play MMO FPS, which, as Macauley oh-so-elegantly put it, is “huge.” It’s a big game that tries to cover all the bases: Free-to-play roots, story-packed PvE systems, competitive PvP, and an amalgamation of varying art styles in an attempt to achieve reasonable balance – a calm medium of cartoony and SciFi, though still vibrant and oddly cheerful. Maybe it was the pink armor.

If you want the full back-story of the game, go check it out on Firefall’s website. We’re going to jump straight into mechanics and competitive grit, then hit the monetization model and any concerns.

Jetpacks lend themselves to tricky level design and gameplay mechanics and attack-path ingenuity; it’s significantly easier to escape dire situations, but just as easy for an enemy to open up an unexpected flank. That’s the very heart of the game: Agility and commanding weaponry. Macauley slipped the word “E-sports” casually into our conversation and inadvertently changed the course of the ship – I was hooked. As our forays into MLG Raleigh have consistently preached, e-sports will continue to change the face of competitive gaming – it’s an entirely new entertainment medium and is dying to be tapped by worthy games.

Firefall hopes to be one of those games.

Firefall’s “Battleframes” (colloquially, ‘classes’) help solidify player roles as the major contributing archetypes in any modern shooter: Recon, medic, assault, and engineer. Each class possesses a unique, cooldown-controlled ability for use on the battlefield – in my demo as an assault trooper, my slam attack first led me to the skies and then, because of that whole “gravity” thing, brought me back down and applied my full, big-boned weight to those unfortunate enough to stand below.

Skill finds itself embedded in the application of these abilities. As-is, they’re pretty standard and feel almost templated, but we’re not limited to their initial descriptors: Since my slam did more damage from higher up, I was able to climb atop ridges overlooking a frequented passageway, then spring down upon my prey below. This higher position offers more one-shot potential on clustered players, but increases the difficulty of predicting the ideal impact location.

It’s this type of strategy that Red 5 Studios hopes to see utilized in unexpected ways by pro-level players in competitive match-ups. The game’s certainly not only for experts, though – the matchmaking system attempts to resolve imbalance issues before they happen by assessing a player’s relative skill level, assigning him or her a number, and then staying within a predefined match range. This prevents experts from being matched against beginners, for the most part, and ensures that more casual players are matched up against others of their ilk.

Guilds will be happy to know that Firefall does have full “guild” functionality (they call them “armies,” here, which is a bit more fitting of the theme), including rosters, competitive match-ups, and eventually leaderboards.

Firefall does not consist of “realm” or “shard” equivalents, as do other MMOs, but instead uses heavy instancing and the aforementioned matchmaking – no paying to transfer servers, just /join [friend]. Simple. This also reduces risk of under-populated servers and keeps the PvP community alive at all levels, not just max level.

Like most persistent MMOs, Firefall also has common gear, loot, and leveling systems that are all applied in the PvP and PvE components. 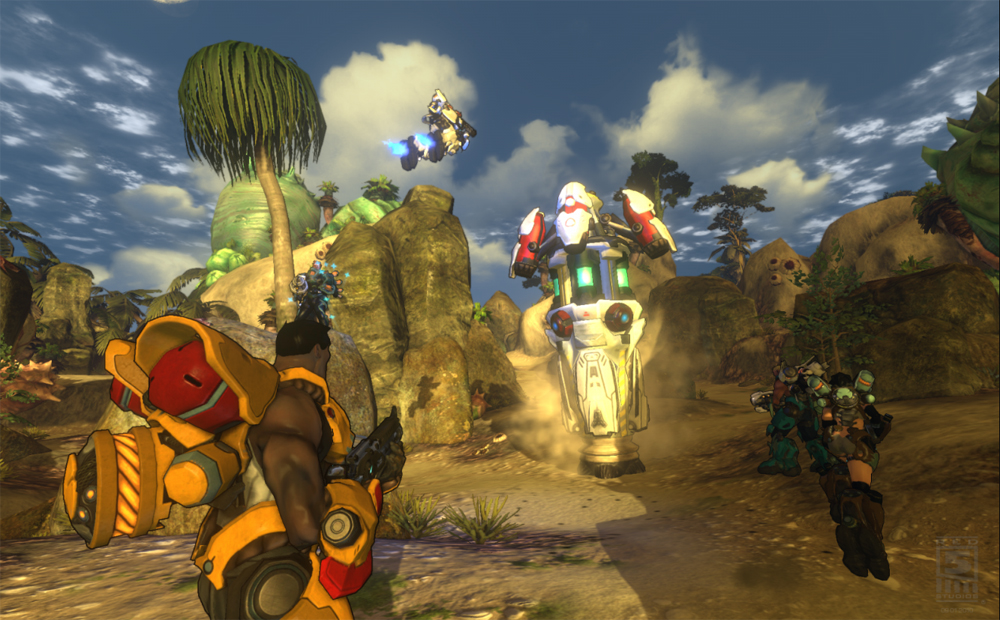 Macauley was quick to tell us that Red 5 Studios has been coordinating closely with shoutcasters, professional commentators, and pro-league players to pinpoint the ideal team sizes and match settings, ultimately leading to toolset preferences and determining that 5v5 teams were optimal for competitive play. Red 5’s team is working to implement – or at least consider implementing – official spectation utilities, making the jobs of shoutcasters easier and hopefully resulting in more entertaining e-sports entertainment. It comes down to, as the previously-linked article mentions, gladiatorial showmanship: If it’s fun to play and not fun to watch, it won’t be much of a spectator sport for the masses. That’s where those tools come in.

In an ideal spectated FPS, it’d be fantastic to see tools that enable hopping back to a previously-selected player, jumping to points of conflict on the map with the stroke of a hotkey, assigning locations to function keys (as with StarCraft 2’s Ctrl+F1, et al.), popping-up overall score and map ownership, a top-down view, and spawning timers to indicate when players on each team will respawn. A seamless replay and playback system is a must, of course. A few of these are planned items, others may not be, but the game is still in full development. Red 5 Studios is wide open to suggestions, so pass anything along to us and we’ll relay it to their group.

The backing concept is clear: Make a caster’s job as easy as possible so they never miss a key moment.

(Hey, Red 5 – are you reading this? Go check out this video by Tasteless and Artosis for some insane shoutcaster UI skills).

Firefall’s dedication to appeasing all fronts of gaming, admirable as it is, left me with a terrible, lingering feeling of dread; the tattered remains of dozens of FPS games and MMOGs lie between Firefall’s inception and its path to prolonged success. These games, every one of them, experienced some level of over-extension. Going for audience is great – do it! – but stretching a time-limited development team thin risks tearing the weave that binds the project. Even an off-the-cuff statement about artistic direction was rooted in an underlying drive to net the maximum number of players – I’m not sure that the visuals were targeted for a specific audience to adore so much as they were targeted for all audiences to tolerate. That’s not to take away from the team – but I think what I’m trying to say, in short, is that Firefall feels like it’s trying to be a bit of everything. It’s impossible to judge the strength of this approach – it’ll either have a cohesive bond that outputs a flowy, mixed game for casuals or, well, not. I’m hoping for the former, because I did thoroughly enjoy my limited time with the game.

Final Thoughts (See Also: “I Just Scrolled To the Bottom”)

Macauley is incredibly attached to his team’s creation and, truth be told, was one of the best interview subjects I’ve worked with in the past few years. There’s a tangible, inseparable bond between the team and the game, as was demonstrated in his answer to my question about monetization: “Honestly? We haven’t even thought about monetization yet. We’re focusing on making it fun first. This is our dream game – when we should have been packing for PAX at 12:30AM a [few days ago], we were online playing Firefall.”

When pressured a bit further, though, he re-iterated: “We’re not a pay-to-win model. Look – we’ve played a lot of games. We want it to be fun first.” Firefall will include ‘convenience items’ (think EXP boosters or accelerated mineral harvesting) and aesthetic items for its primary source of income, but will not, it was firmly stated, include powerful items that can be purchased with real money.

The team glows with enthusiasm and deserves a success – let’s just hope the mechanics work out for them. If you want to give it a shot, the beta is open 24/7 now, so go register for your free beta access.

I may revisit Firefall in depth after PAX ends, so keep your eyes locked on the home page. As an aside, Firefall will be at the upcoming MLG in June.