Chivalry - Medieval Warfare vs. War of the Roses - PAX East 2012

Slicing opponents into slivers of what could be misconstrued as delicious bacon has to be one of the most rewarding multiplayer experiences achievable. Due to technical blockades and, perhaps, a heavily-saturated singleplayer/MMORPG market, medieval-style slashers rarely hit the multiplayer scene with enough force to make an impact; Age of Chivalry and Mount & Blade: Warband both come to mind as recent, successful titles, but that's two medieval-focused multiplayer games in the span of several years, whereas we see dozens of shooter titles in the same period.

"Ladies and Gentlemen: Welcome to the Arena!" still rings in my head

They're a rare breed, but when they're done right, FPS/TPS (the 's' stands for 'slasher,' in this case) games can entertain far more than a shooter ever would dream.

At PAX East 2012, we had the unique privilege to talk with Gordon van Dyke (of Battlefield fame), one of the senior producers on War of the Roses, and Steve Piggott of Chivalry - Medieval Warfare (which we video previewed here) to compare the games against each other.

Both are great games, but for those pondering whether they should get Chivalry - Medieval Warfare or War of the Roses, we've broken-down the style and unique features of each game below.

War of the Roses Overview

The feature-set of WotR is a bit more expansive and better accommodates classic RPG gamers, but it will require more planning and thought when spec'ing out a character build. We see traditional leveling and weapon/item customization at the heart of the game, much akin to some of the Battlefield and Call of Duty games, coupled with player crests and cool killing moves that are unique to each weapon (or, at least, presently planned that way). 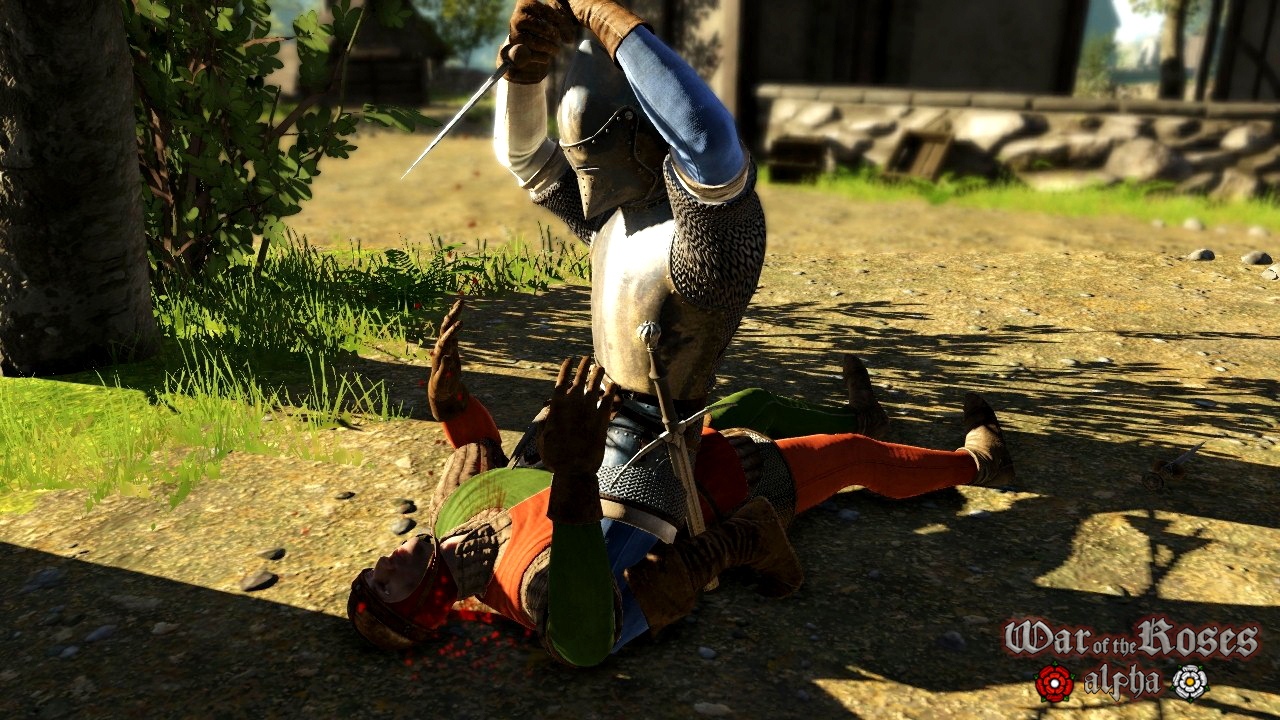 I used to be an adventurer like you, until I quoted this meme and got stabbed repeatedly in the face.

War of the Roses has a slower overall feel to it, but it's "slow" in the sense of Battlefield vs. Call of Duty, not to the level of Insurgency. There's more thought involved when engaging in combat as a result of its click-and-drag style swinging, similar to Mount & Blade, and "extremely accurate" hit-boxes. Characters equipped with visor-enabled helmets can lower or riase a visor (which slightly decreases peripheral vision when down, but really not to a point that's noticeable) that will increase armor to the face, but archers should (Gordon was not 100% sure on this) still be able to snipe the player through his visor. On the same note, the weapon physics in War of the Roses means that, as an easy example, players swinging a halberd won't do much (if any) damage with the shaft of their weapon, encouraging better-timed swings and forcing combat distances to remain consistent to the weapons in use. Halberds are good at medium range -- a couple of feet -- but are incredibly vulnerable to warriors wielding short weaponry that can get in close. Because of the weapon physics and accurate hit-box management, players swinging a longer weapon at close range will likely end up bashing an up-close player with the pommel or shaft, doing almost no damage.

Beyond gameplay, War of the Roses has really gone for a historical approach, so history buffs will get more punch out of WotR and should have a great appreciation of the well-known war of the Britons (though this also makes the game significantly more difficult to market, of course).

Chivalry's approach is faster-paced and gets straight to the point, bypassing most (if not all) leveling silliness and unlockables and instead dropping players straight into a medieval war. It's much more friendly to a pick-up-and-play style of gaming, buffing its appeal to time-pressed players.

Chivalry's focus on fun and speedy action means that it often involves less advanced strategy, but focuses more heavily on the agility and raw skill of the players. Interactive environmental elements, like a pit of spikes, fused with kicking and bashing mechanics make for fun maneuverability that sharply adjusts the game's skill curve. Actually, Chivalry sort of reminds me of Jedi Knight: Jedi Academy, for those that still hail to the king of melee combat games.

The game can be thought of as a sort of medieval moshpit: It's chaotic, bloody, and incredibly fun, but will leave participants tired after bursts of play. The game isn't complete yet nor have we had a ton of hands-on time with it, and despite its transition to UDK from its roots as a Source Engine mod, the game still very much feels like Counter-Strike. It's quick and fun with the potential for seasoned players to really devise in-depth strategies, but for the most part, skirmishes will largely consist of kill-sprees, with a few brief, inspired moments of strategy (like the spike pits).

Chivalry does have some very impressive swinging mechanics being implemented, though -- players can change the arch of their attacks mid-swing, making parrying and ripostes a regular occurrence. A quick clash of swords can change the course of battle.

War of the Roses vs. Chivalry - Medieval Warfare

The two games are similar in terms of core mechanics (hit things until they stop moving), but beyond that, they have a very different flow. Chivalry feels more chaotic, arcadey, and arena-styled, while War of the Roses emits more of a visceral, history-backed, realism-focused experience.

From what we've seen so far, you really can't go wrong either way. If you want strategy and a game with a strong, experienced team behind it, try out War of the Roses; if you enjoy indie titles and love focus on fast and furious gameplay mechanics, go with Chivalry.

If you have any questions about either title and how it works, or would like us to reach out to the devs to get specific answers, comment below and we'll get those answers for you!

Read more about War of the Roses here: http://www.paradoxplaza.com/games/war-of-the-roses