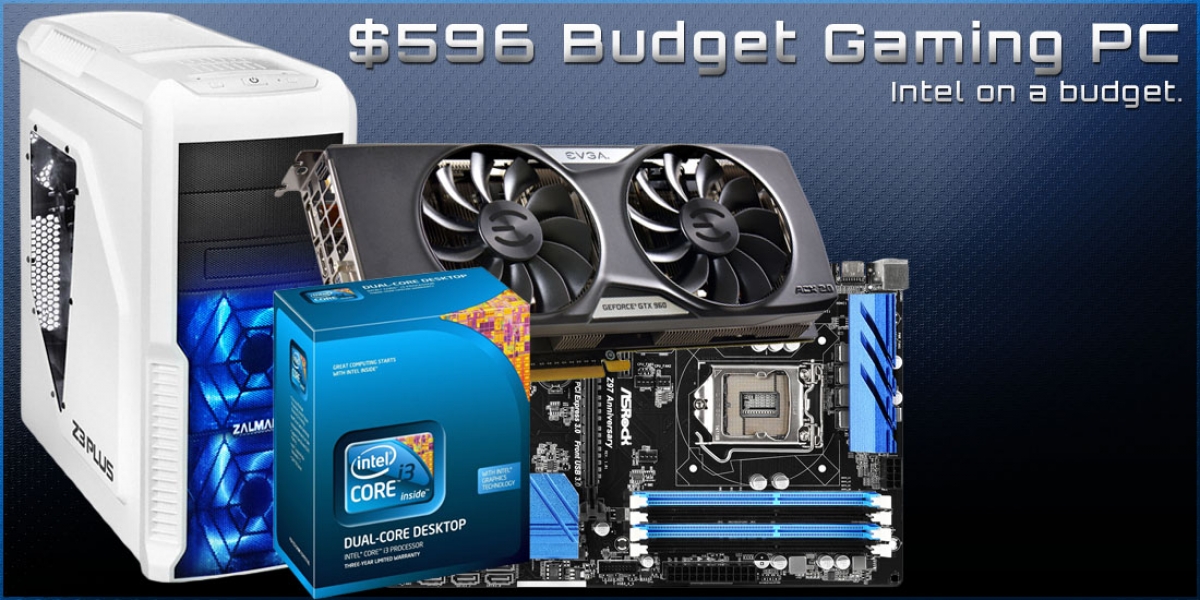 Our newest gaming PC build makes use of an Intel CPU and GTX 960, allowing medium to high graphics settings for less than $600. Featuring the new GTX 960 and Zalman Z3 Plus case, you get a great-looking PC that won't burn up your bank account – or the power bill, for that matter.

EVGA GeForce GTX 960 ($210): Just as with our recent $884 High Graphics Gaming PC Build, we brought back the newest Maxwell-powered GPU, the GTX 960, for this build guide. It has 1024 CUDA Cores that boast 40% faster performance over Kepler's cores, netting twice the power efficiency of previous-generation cards. While the 2GB of GDDR5 memory on a 128-bit interface may not seem like much, this fine-tuned GPU more than makes up for the lack in memory in overall 1080p performance (though we'd avoid it for resolutions greater than that).

The EVGA version of the GTX 960 is overclocked out of the box with a Core Clock of 1279MHz and Boost Clock of 1342MHz. Maybe more importantly is the superior cooling EVGA provides with their ACX 2.0+ cooler. Coming with large, double ball bearing fans and straight heatpipes, ACX keeps the GPU cool during more intensive gaming sessions, additionally aiding in overclocking. As far as display goes, this GPU has ports for HDMI, three DisplayPort connections, and a DVI connection for resolutions up to 4096 x 2160. Despite this advertised support, note that even if you had a 4K display, the GTX 960 would be unable to produce playable gameplay at such a high resolution.

Intel Core i3-4130 ($120): It's tempting to go the AMD route when doing these low-budget builds, but this time around we decided to go with Intel to show that they're also a viable option even in low-budget builds. This i3-4130 hosts two physical cores, hyperthreaded for four total threads. What you get with the i3-4130 is a much better processor, at 3.4GHz operating frequency and a 3MB L3 cache at 54W TDP. The result is a great low-budget CPU, and the Intel HD Graphics 4400 IGP stands as a useful back-up troubleshooting option.

If you're looking for something a little better and have $80 extra to spend, consider purchasing this Intel Core i5-4590 for $200. Use promo code EMCANKP26 and save an extra $10.

Kingston HyperX Fury 8GB 1866MHz ($61): The price of memory has fallen to a point where we can now purchase 8GB of DDR3 memory at a reasonable price. We found this 1866MHz HyperX Fury kit at $61, a low in recent months. Right now, 8GB is more than enough for most gaming rigs and 1866MHz is more than fast enough for a build that includes a discrete graphics card.

ASRock Z97 Anniversary ATX Motherboard ($75): One of the perks of going with an Intel CPU is that you have a much better selection of motherboards. This doesn't always mean you have to spend a lot, either, as is evident with this ASRock Z97 motherboard on sale for a budget-friendly $75. ASRock has made a name for making quality motherboards at a lower price, and this Z97 motherboard offers just about everything you will need in a gaming build.

If you're looking to SLI/CrossfireX, this motherboard may not be for you as it only supports one PCIe 3.0 video card.

EVGA 100-W1-500-KR 500W ($35): EVGA has made a splash with these low-cost power supplies. Here, we have a 500W power supply that is 80 Plus Silver certified to help a little with the power bill. In this build, 500W is more than enough to power the GTX 960 and i3 CPU (and even offers enough power if upgrading to an i5). This bare bones power supply is a great bargain at $35, without entering the questionable space of lower-end PSUs. This PSU is not modular, so you will have to hide those unused cables manually.

If you're looking for a power supply that is 80 plus Gold and modular, this Rosewill Photon 550W PSU is on sale for $60.

Western Digital Blue 1TB HDD ($55): Because this is a low-budget build, we decided not to use an SSD to allow for the lowest price possible. Despite very affordable prices and better cost-to-performance than ever, an SSD with a quarter the capacity of this HDD is still twice the price.

With that being said, utilizing an SSD in any build will offer a much better overall PC. This HDD from Western Digital provides 1TB of storage space at a very modest price, but if you want to include an SSD and have an extra $85, this OCZ ARC 100 240GB SSD would be a great starter option.

Zalman Z3 Plus White ($50): The case is the one component that you will see the most, so you should always pick one that is appealing visually and offers the most quality for your budget. Here, we found a new entry into the Gaming Case market by Zalman with their Z3 Plus White edition. This ATX mid-tower comes with everything you should need from a budget gaming case. This case comes with 3x120mm fans with room for up to six, including an adjustable GPU fan and a fan controller. You get two external 5.25" bays and four 3.5" bays, and for the back of the case, a total of seven expansion slots. You get the usual headphone/microphone jacks, as well as two USB 2.0 and USB 3.0 on the front of the case, with a ledge to support your smart phone or external hard drive. The white exterior and clear side panel really make this case look higher-end than the $50 asking price.