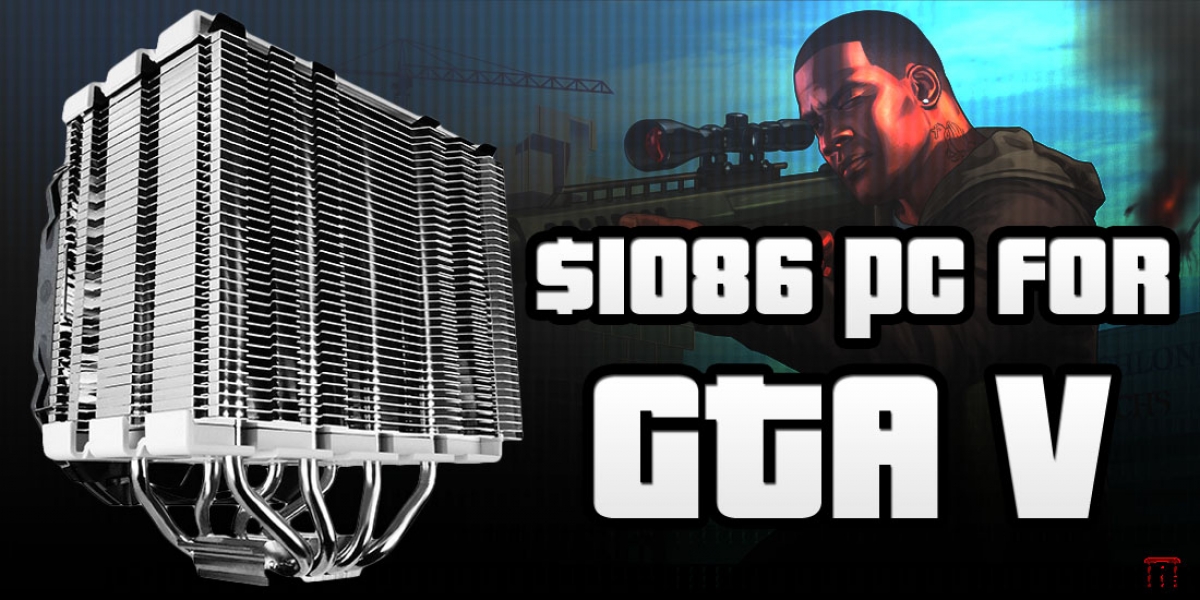 Don't be the April fool this year with an outdated PC, struggling to fully appreciate the high-fidelity graphics of modern games at high resolutions. This month's mid-range gaming PC build comes in at just over $1000, focusing purely on high gaming framerates at resolutions approaching 1440p – though it'll handle 1080p just fine.

This system opted for use of an AMD 290X given its positioning as a cost-effective alternative to the similarly-priced GTX 970. With the looming launch of Grand Theft Auto V, we built the system with the intention of running the game at ultra graphics settings, hopefully allowing some headroom for graphics mods in the future. This gaming PC will handle GTA V without issue.

This time around, we decided to do a high-end Gaming PC build that features an AMD video card. This PC will be able to play most modern games at the highest settings, so the only April showers you see will be tears of your enemies.

Tutorial - How To Assemble a Gaming PC

It's old, but our video tutorial still covers all essentials for system assembly.

XFX Double Dissipation R9 290X ($350): We used a combo deal between the video card & RAM for a discount. Changing up the pace, we decided to do a high-end build that features one of the hottest GPUs out today – an R9 290X. By “hottest,” I mean that it both delivers excellent performance and generates massive heat. This XFX variant has a dual-fan "XFX Ghost Thermal 2.0" design which should help with heat dissipation some, though using a case with optimal air flow capabilities will also assist with lowering temps.

This XFX Double D R9 290X comes with 2816 Stream Processors and 4GB of GDDR5 memory on a 512-bit memory interface, boasting a 1000MHz Core Clock (GPU) and 5000MHz effective Memory Clock (GPU). What all of these numbers mean – if you didn't hit the attached dictionary links – is that you'll be able to play most, if not all, games out at the highest settings with relative comfort at 1080p; 1440p gaming is also possible using this 290X and will need slightly tweaked settings in some instances, but should still be nearing high settings for 60FPS.

Intel Core i5-4690K Devil's Canyon ($240): We used a combo deal between the CPU & motherboard for a $10 discount. This refreshed Haswell chip from Intel is the best mid-range or better gaming processor for this price range. It can be overclocked past the stock 3.4GHz clock speeds with unlocked multipliers and has a healthy 6MB L3 cache. If you do decide to overclock, we strongly recommend buying an aftermarket cooler, as the stock cooler will not properly dissipate thermals at higher speeds, much less normal operating speeds. The stock cooler will get you by for a little while, but we strongly urge early replacement.

Cryorig H5 Universal ($47): If you're looking to overclock your CPU – or just want something better than the stock cooler that comes with the i5 listed – we have a good option for consideration. Cryorig is a relative newcomer, but is making waves with their innovative designs. In the product description, the company states:

"The CRYORIG H5 Universal is the accumulation of years of research and design. The H5 Universal is designed from the ground up to have ZERO RAM interference on the latest Intel LGA 115x and AMD platforms."

This cooler comes jam-packed with multiple features, from their proprietary Hive Fin and Jet Fin systems to high-efficiency heatpipes and their Xt140mm PWM fan to keep temps down.

Corsair Hydro H110 Extreme ($100): If you want to go the quiet route, or just want to be able to see more of that beautiful Krait motherboard, we recommend this H110 liquid cooler instead of the Cryorig air cooler. It is compatible with the case we selected, but if you decide to go with another, make sure it has room.

G Skill Sniper 8GB 2400MHz ($67): We paired this G.Skill memory with the XFX GPU to save you an extra $16. The Sniper series gets high praise and will be great in this build. You will have to set the speed to 2400MHz in BIOS by enabling XMP, but after that, you get fast RAM for cheap. In this setup, 8GB is more than enough for gaming.

MSI Z97S Krait Edition ($100): We combined this motherboard with the CPU for a discount. This Z97 motherboard employs a medium-count phase power design for improved overclocking, making use of its UEFI BIOS for unlocked access to in-depth CPU OC tuning features. If you want to make it easy, MSI's “OC Genie” software will auto-OC the CPU, though we always recommend just using this as a baseline.

I admit – the first thing that caught my eye with this board is the unique black and white color combination, something we talked about at its CES launch. This board offers more than just good looks, too: it can hold up to four sticks of DDR3 RAM, overclocked up to 3200MHz. The board hosts two PCI-e 3.0 slots for SLI/CrossfireX as well as three PCI-e x1 and dual PCI slots.

Rosewill Photon 750W ($90): In this build, 750W is a bit over the baseline requirement, but the price and feature-set of this PSU makes it a good buy. 750W leaves a little room for upgrades as well. This Photon is fully modular, so builders can use just the cables needed and help with air-flow in the case doing so. 80 Plus Gold certification helps save money with the power bill and ensures an overall increase in energy efficiency for the system. All of this justifies the modest $90 price tag. Never go cheap with the PSU – the results can be disastrous.

Crucial BX100 250GB SSD ($100): If I didn't list an SSD in this build at this price range, GN's Steve would either fire me or make me brush his hair. So, in fear of tangles and dead ends – and because speed is good – I included this Crucial 250GB SSD that will serve as a great primary storage device. It will greatly diminish your loading times in and out of game, and the read/write speeds are a vast improvement over an older HDD. This drive will fill up fast, so we suggest just installing the OS and key programs along with a few games to keep it from filling it up, then pick up this Western Digital Blue 1TB HDD for $55 as a secondary storage device.

Corsair Obsidian 450D ($108): Ah, yes – my favorite component. This is the one component that you will see every day, so first of all, make sure it's aesthetically appealing for long-term use. The Corsair Obsidian 450D is not as flashy as some cases, but to me, that's actually a 'pro' of the case. Aside from the appearance of this case, it offers several features and extras to make it worthy of inclusion. Being a mid-tower, it won't take up too much space, but still has plenty of room for all of your components and the modular drive cage system will help with air flow.

The 450D comes with three pre-installed fans: 2x140mm front intake fans and 1x120mm rear exhaust fan, with room for up to seven fans total. The 450D is equipped with front, top, and PSU fan filters. The front panel has 2xUSB 3.0 connectors as well as headphone and microphone jacks. With it housing a R9 290X, we strongly recommend that you monitor temperatures and consider fan additions to help keep temps down. I think these Corsair Air Series 140mm White LED fans would look great; I'd buy two of them and have them mounted in the top as exhaust fans, if no radiator is present.

Please visit our forums for any questions or concerns, or feel free to post a quick question below Until next time!