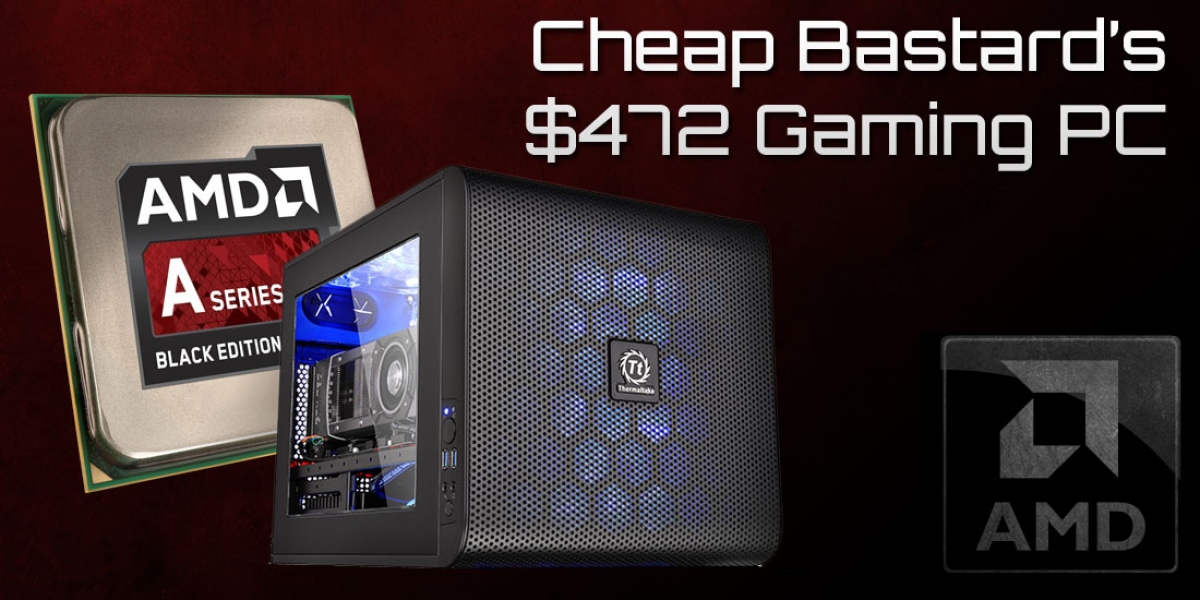 AMD A10-7850K ($140): We used this triple-item combo deal to save on the APU, motherboard, and RAM. With the impending release of Kaveri's successor Godavari, AMD is slashing prices on all of their remaining stock of Kaveri APUs; the result is that builders can now get this powerful APU for less, reaping the benefits of all of the advancements that were made with this processor. Coming with a total of 12 Compute Cores (4 CPU and 8 GPU) with 512GCN streaming processors, the CPU clocked-in at 3.7GHz, this APU will hold its own in moderate- and low-fidelity gaming with ease.

Cryorig H7 ($33): One way CPU manufacturers keep prices low is by investing little in their poorly made coolers. We always suggest that you pick up an aftermarket CPU cooler to not only extend the life of your processor, but cool with quieter temperatures. If you're into overclocking, an aftermarket cooler is a must. This Cryorig H7 gets great reviews and will keep the APU cool when under load.

G Skill Sniper 8GB 2133MHz ($64): Again, this triple-item combo deal was used to save a bit of money. In this build, 8GB is enough memory for gaming and multitasking functions. Since this build utilizes an APU over a dGPU, the APU will reply on the RAM directly for VRAM transactions due to the lack of on-card video memory. For this reason, it's important to use RAM with a high clockrate to eliminate bottlenecking.

Gigabyte GA-F2A88XM-D3H ($63): The last item of our triple-item combo deal is this Gigabyte Bolton D4 chipset mATX motherboard. This motherboard has everything needed for this build: room for 4 memory slots of DDR3 memory (up to 2133MHz and a maximum of 64GB), one PCIe 3.0 x 16 slot, one PCIe 2.0 x 4, PCIe x 1, and PCI expansion slot, and 8xSATA 6Gb/s connections. A88X allows for overclocking functionality for those who want to pull slightly more power out of the 7850K.

Corsair CX600 600W ($45): Corsair is well-known for a recent track-record of quality power supplies. The CX series is one of Corsair's most popular PSU brands for its affordability and entry-level efficiency. This 600W PSU might not be modular, but it is 80 Plus Bronze certified and offers way more than enough power for this build; note that you could easily drop 100W on this PC build (and still have some to spare), but the affordability of this unit – and its room for expansion – make it an easy selection.

Crucial BX100 250GB SSD ($95): Crucial has taken the world by storm with high-quality, affordable SSDs, aided by the fact that Micron owns the company. The MX100 became our go-to mid-range gaming SSD for a few build cycles, but the company has since put out more affordable alternatives. SSDs are not only faster than traditional HDDs, but more reliable as well. This 250GB SSD would be perfect as a primary storage drive in this build.

Western Digital Blue 1TB HDD ($55): Those SSDs will fill up fast, so we recommend picking up this HDD as a secondary storage drive. This is what you'd want to use for movies, music, and other static media files that don't require high-speed space. Most games belong here, with the favorite game living on the SSD.

Thermaltake Core V21 ($70): I know, I know – we used a similar Thermaltake case in our last $990 AMD Build, but with the ample selection of SFF cases Thermaltake offers, it's hard to pass-up a case like the Thermaltake Core V21. The modular design of this case offers an interchangeable, transparent side panel window and stackable case railing (if desired, multiple units can be stacked for liquid cooling or alternative computers). Undesired railing or mounts can be omitted from the install, making for a slimmer build when possible. The V21 doesn't have room for an optical drive, but does support 3x2.5" or 3.5" drives and hosts five expansion slots. The front has dual USB 3.0 ports alongside the usual audio jacks and power/reset buttons. Only 1x200mm front intake fan is pre-installed, but there's room for many more fans should a hotter dGPU be added.